This canal, linking the Aegean with the Ionian, is the narrowest shipping canal in the world. Its construction began in the 7th century BC, but was completed only at the end of the 19th century. Outstanding rulers of Antiquity dreamed of building this canal, and the Nazis, who retreated in 1944, almost destroyed the unique structure. Today we will talk about the Corinth Canal in Greece. 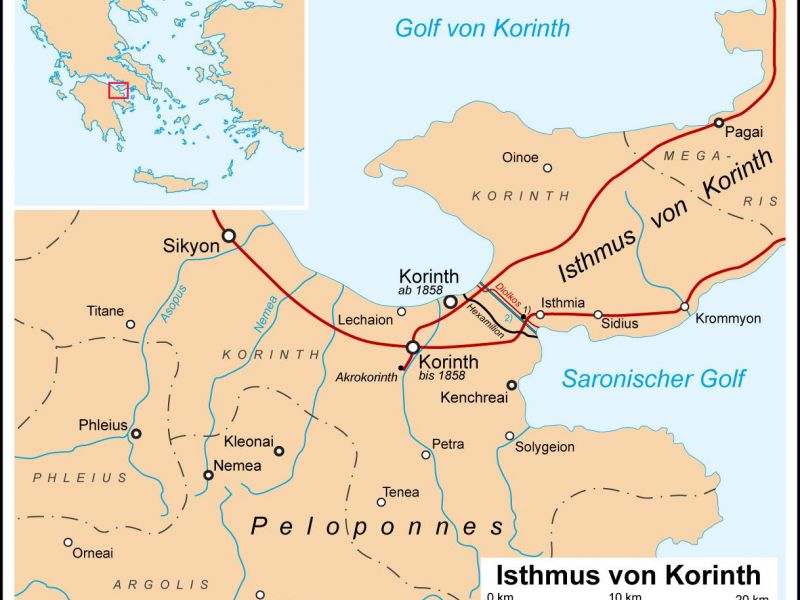 More than one ruler of the ancient world dreamed of connecting the Saronic Gulf of the Aegean Sea and the Gulf of Corinth in the Ionian Sea. With the help of such a canal, it would be possible to shorten the route around the Peloponnese peninsula by as much as 400 kilometers. The canal began to be built by the ancient Greek ruler Periander in the 7th century BC. But, fearing that due to the difference in the level of the Aegean and Ionian seas, flooding could occur, he stopped the grand construction. 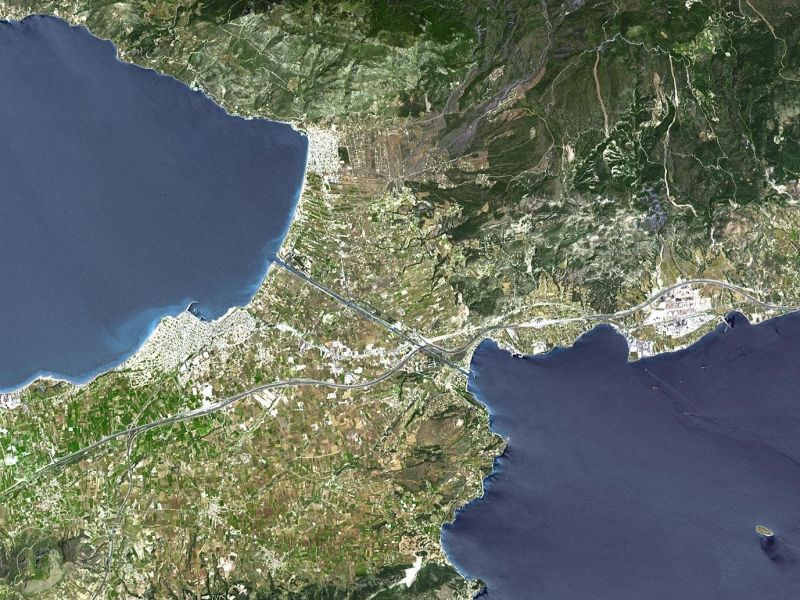 Instead, the Diolk stone portage was laid, traces of which are still visible not far from the canal. The story mentions Julius Caesar and Caligula, who also planned to complete the canal. Real attempts to complete it were made by the emperors Nero and Galba, as well as the Byzantines and Venetians. But work on the completion of the “stubborn” canal with a length of only 6 kilometers always ran into some kind of obstacles, and they had to be turned off. 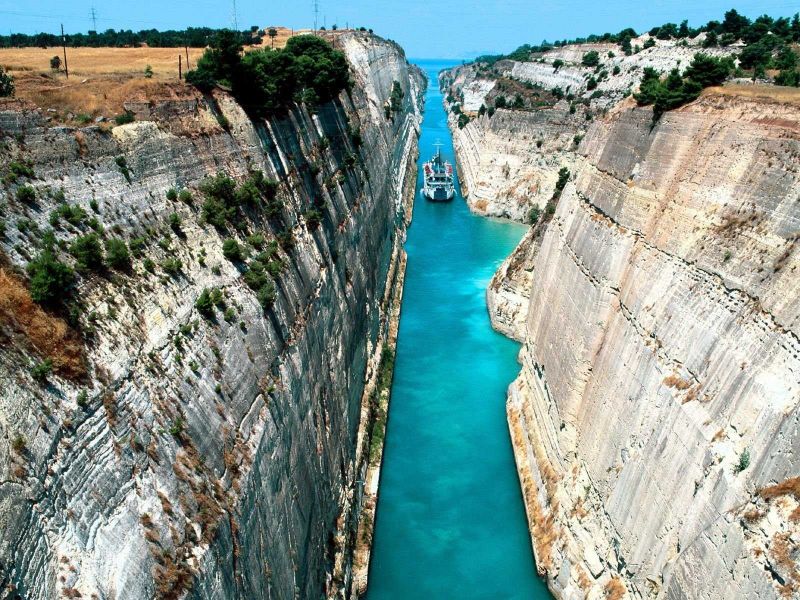 It was possible to carry out the plan only at the end of the 19th century, when the Corinth Canal was finally built. The grand opening took place in August 1893 after 12 years of construction. 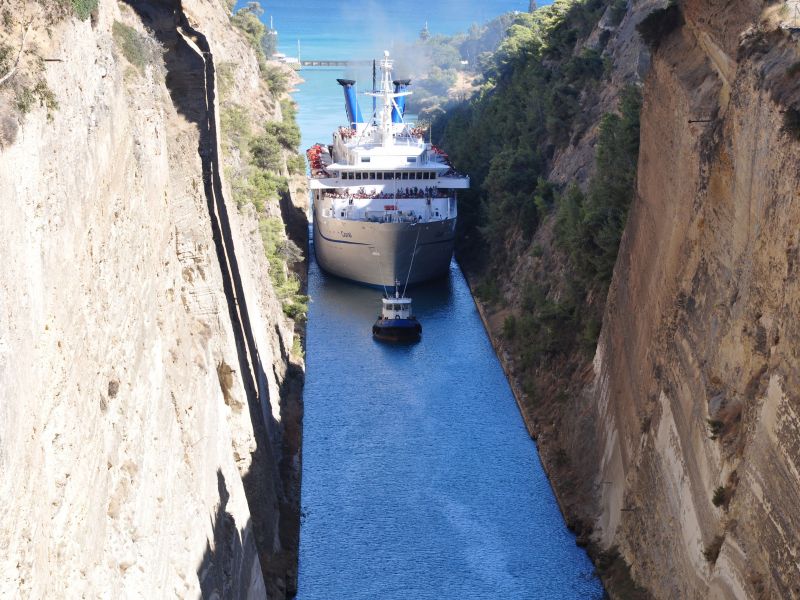 Most of the channel passes through the limestone massif, and the height of the sheer walls reaches 76 meters. The Corinth Canal is certainly one of the most beautiful shipping channels in the world. But at the same time, it is also the narrowest of all existing channels. Its width is only 21 meters and reverse movement is organized along it. There are also restrictions on the width of ships: large liners cannot pass through a narrow channel. Despite the significant inconvenience, the Corinth Canal annually passes up to 15,000 ships. 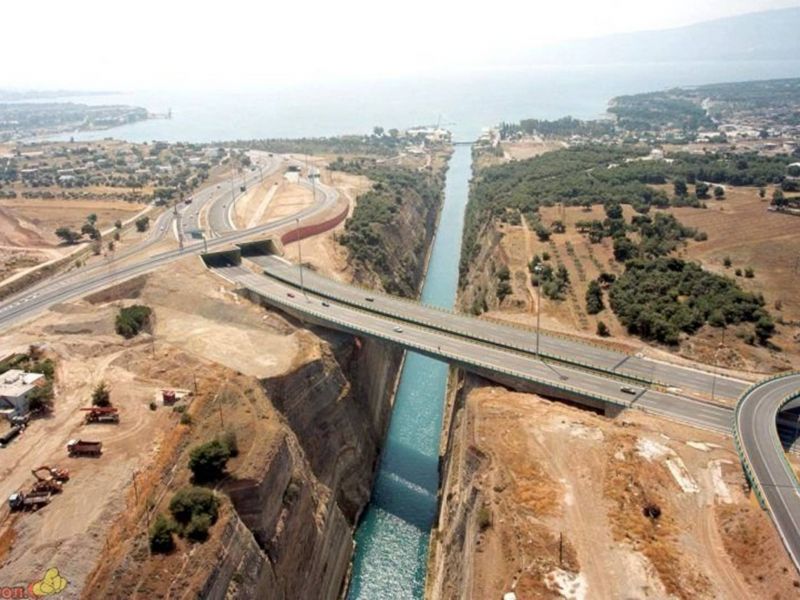 Interesting events took place with the Corinth Canal during World War II. In April 1941, Nazi troops invaded Greece. An enemy landing force landed along the banks of the canal, which was not offered worthy resistance, and the fate of the Peloponnese peninsula was decided. The Corinth Canal was under the rule of the Nazis until October 1944. All this time, he slowly fell into disrepair, as no one was engaged in cleaning and maintenance of the structure. Retreating, the Nazis tried to cause as much damage as possible to the famous canal. In hisIn the riverbed, the Vesta steam ship was blown up, leaving a lot of faulty equipment and the wreckage of the railway bridge. The Nazis deliberately blew up the walls of the canal, because of which it was covered with a huge amount of soil. In order to put the hydraulic structure in order and restore its operation, the help of American specialists was needed. The Corinth Canal was reopened in the summer of 1948 and has been successfully operating to this day. 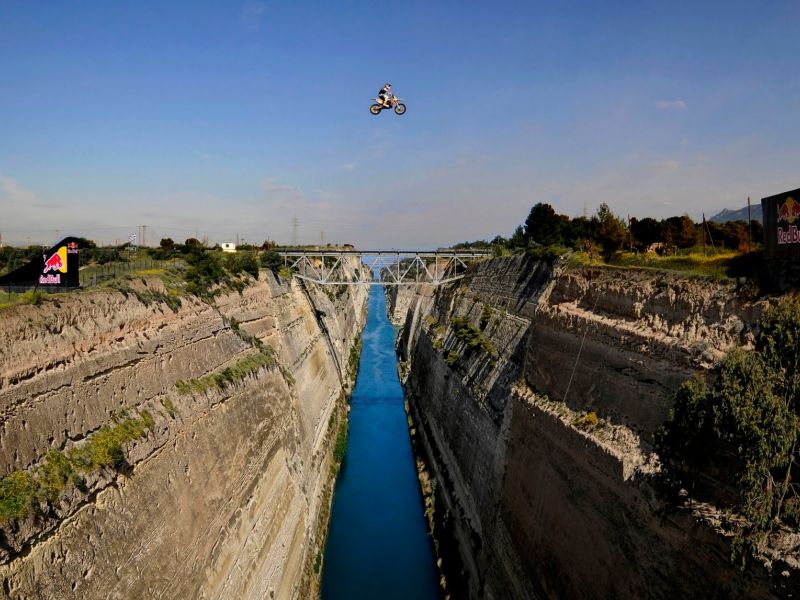 Several automobile and railway bridges are thrown across the canal. And lovers of extreme sports often arrange competitions and various events there. 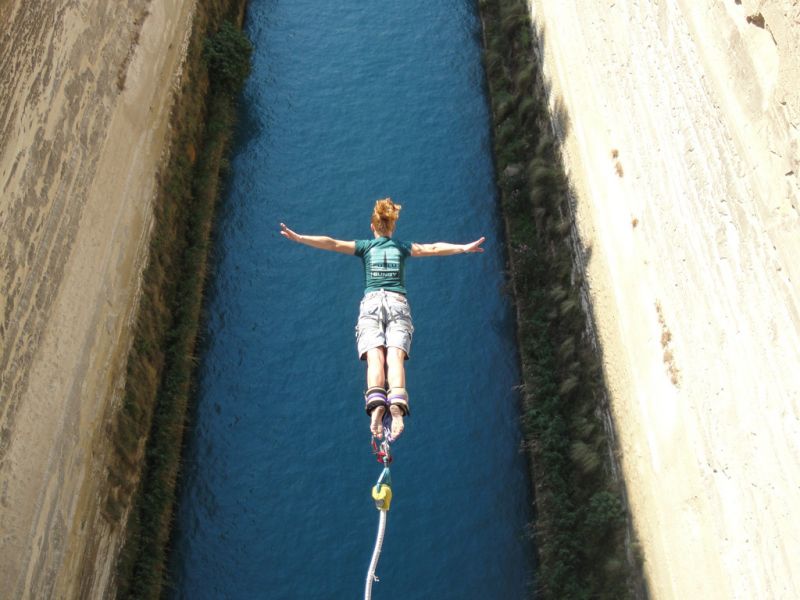 A short video about the passage of a sailing sailboat through the canal: