Internet searches on the topic of sailing small boats turned up a link to one of the owners of Albin Vega, under the nickname helgi277. The author describes in great detail his improvements to improve habitability and convenience on the sailboat. Link to his LiveJournal: http://helgi277.livejournal.com

I liked his idea of how to make the boat unsinkable in case of a leak or other cause of flooding. Here is what he writes:

Before the trip, I collected one of the cylinders, inflated 12 with a pump, the inflation time to the state of "keeps its shape" is 7 minutes. The rest can be finished with a hand pump. There are two such cylinders, dimensions 2 x 0.8 m, in fact, each has a cubic meter of air. This volume is guaranteed not to allow a boat like Albin Vega to go to the bottom even when completely flooded. Cylinder shell made of PVC 900gr./sq.m., inner cylinder made of PVC 430 - 550 gr./sq.m. Each cylinder is divided into two compartments, a Bravo 2000 valve is glued in each compartment. Using a piece of hose, two valve adapters and aIn the plastic tee, a device was made that allows you to simultaneously pump two compartments in one cylinder. In the event of force majeure, it is supposed to inflate the cylinders inside the boat, but as an option, it is also possible to inflate from the outside, for this, a strong sling with clamps is sewn into the shell of each cylinder.

And here it is described how he installed a manual windlass on this boat:

Of the global things, I wanted to install a manual windlass and somehow think over where the chain (which I still had to buy) and the anchor line would fit. From the brought sheet of 10 mm textolite, strips were made, which served as the base of the anchor box. Chain 8mm 40 meters long was bought in Biltem. At first I didn’t want such a powerful one, but the sprocket for laying the chain on the windlass was designed specifically for the 8mm chain, moreover, in England, where this windlass was from, an sprocket for 10 mm chain was also produced and this choice was limited. AlsoI had to find a solid board made of mahogany, which became a kind of bowsprit. In a local small firm for the production of various pieces of wood, I also found the board I needed, 1 meter long and 5 cm thick. Everything was adjusted and installed. A brand new American anchor Mantus was painted next to the bow of the boat. 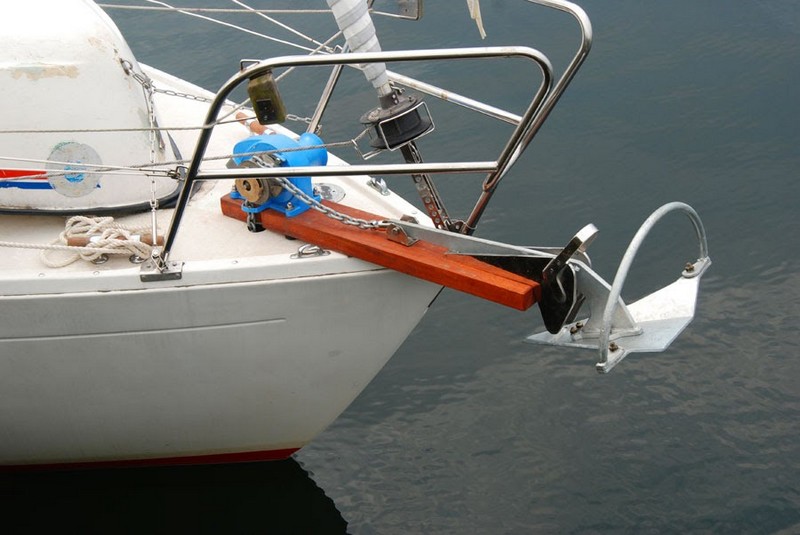 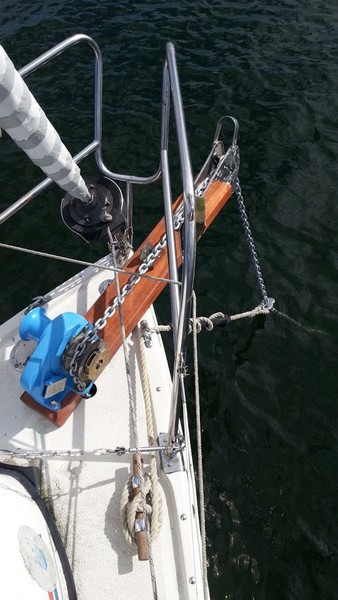 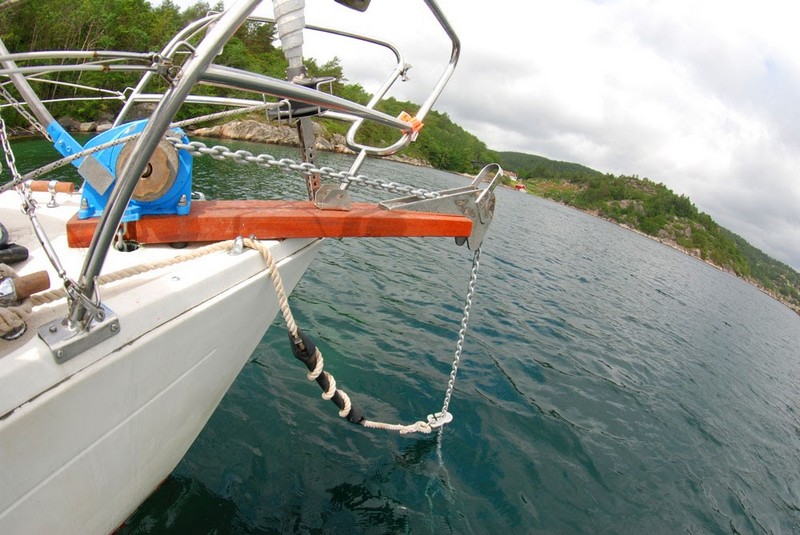 Steps on the mast .

Mast climbing problem. Riveted 13 steps to the mast. The steps are made of stainless steel, the metal was bought in Russia, a friend of mine at work bent them. Then I sanded them down. The mast lay horizontally on the "goats", it was necessary to somehow figure out how to fix the step and carefully drill holes. With fasteners, I decided quickly, an ordinary rubber tie with two hooks, made it possible to make a noose on the step and wrap it around the mast, fix the step at an angle on the mast and at the same time it held and did not fall. Next, with a cordless drill (by the way, our roRussian company Zubr with lithium batteries) I drilled a 4.1 mm hole, inserted a stainless rivet (4x10) and riveted. Of course, it would be better to use monel rivets, but they are not available in Russia, and they were not in Karlskrona. For now, I limit myself to lubricating each rivet with lithol after the end of navigation. Then the second hole, and so on. Only in one I almost guessed right, the left shroud began to touch the step. That's when I had to climb onto the mast with a grinder and cut a groove for the guy. But still, the guy was slightly bent in one place. Decided toinsert a rigid plastic tube cut lengthwise. If the tube is rubbed, then I will decide radically, either a larger groove or I will remove this step. Subsequently, I repeatedly tested the steps, in the end I was very satisfied. Problems of different blocks, navigation lights were solved quickly. Of course, it is not very convenient to stand next to the top on one leg (the steps are riveted with a step of about 50 cm) and holding on to the mast with one hand, do something with the other hand, but it is quite tolerable. 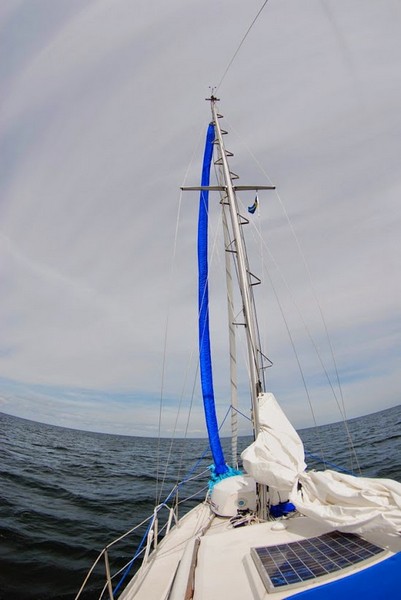 The stove (model Poshekhonka, developed by Rybinsk firms) was brought to the boat a long time ago and was waiting in the wings. I installed it right at the anchorage in Norway during the next campaign. I had a cordless drill. I took out the AMG sheet I had stored in advance, chose a place on the opposite bunk, removed the mattress and tried it on as it would be. Strips of steel were welded to the bottom of the stove. I attached square AMG channels to them with M8 bolts. In turn, two strips of AMG 5 mm thick were fixed to the channels, and I already fastened them through the AMG sheet.with M8 strips to the plywood base of the bunk. The stove was fixed "dead". I scored a lot of pipes, including those bent at an angle of 45 degrees. I did not want to drill a hole in the deck for the pipes, I just brought them into the cockpit. In the second photo, the first mounting option, later I slightly improved the method of fastening pipes, I fastened the pipes to a loop from a chain. 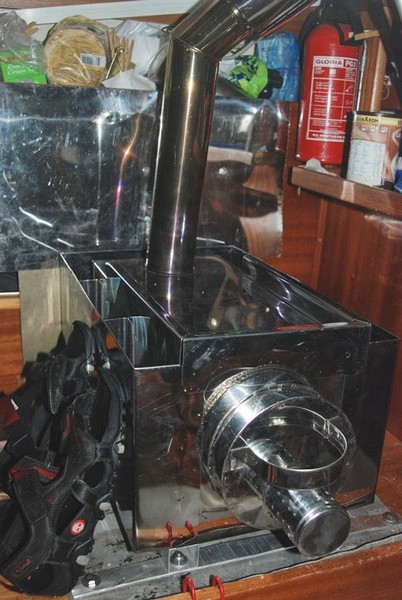 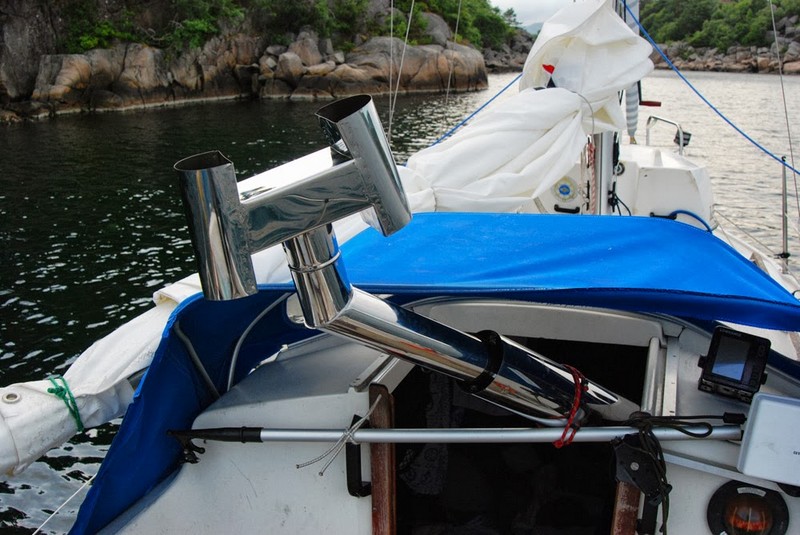 The very first kindling showed that the stove had 100% coped with its task. The cabin became warm and the dampness went away. All things are dry. There was no smoke in the cabin at all, everything went up the chimney. I did not heat much, the pipes, even with a protective sheath, were heated, the deck was also heated 20 cm from the pipes. Apparently in this place should be attached insulating material. Subsequently, I stoked the stove several times in the parking lots. For kindling, I used a special ignition gel. Branches, sticks and boards could be found on any bank. A few branches warmed the cabin perfectly. VPOAs a result, I decided to use the stove for other than its intended purpose. Once, in a thunderstorm, it seemed to me that the stove was essentially a kind of Faraday cage. 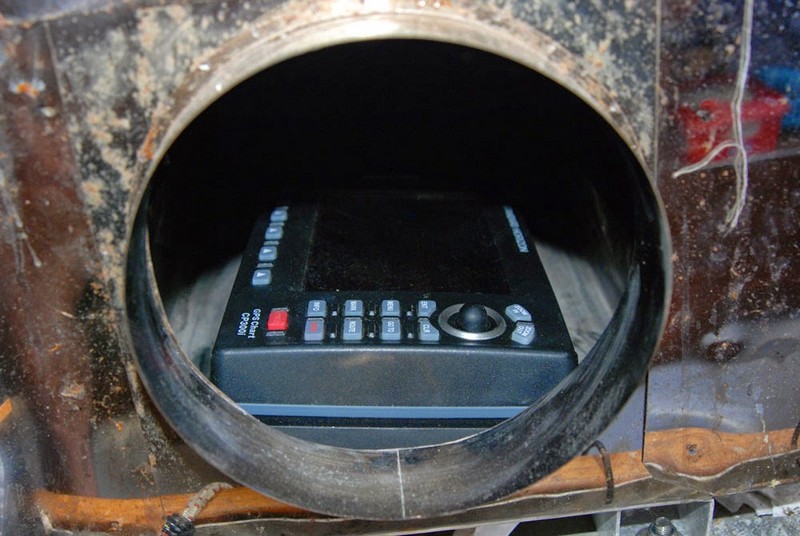 And during a thunderstorm, it is quite possible to put all electronic devices there: a chartplotter, telephones, an echo sounder and even an autopilot.

In the diary of one of the voyages there is a description of the further refinement of the stove.

I walked along the shore and came across one plastic thing, like a piece of pipe, and it seemed to me suitable for my stove. As I noted earlier, back in 2013 I installed a stainless steel stove on the boat, but I led the pipes into the cockpit for heating, which was clearly inconvenient. Nevertheless, on the shore, I did not permanently install pipes through the deck, although I brought a package of basalt wool, two coils of 10 mm basalt cord and stove sealant from Moscow. I had the final detail of the chimney through which the smoke came out, but it seemed that with this dethe hoist could not be sailed, otherwise I would have knocked it down sooner or later with a boom. We needed a piece in the form of a tight cover that would cover the pipe and not interfere with movement. And there was no such detail. And then, on an abandoned Norwegian coast, a plastic plug comes across under my feet. Surprisingly, it perfectly and tightly entered the 125 mm pipe. And so it was decided in the same place, at the anchorage, to drill the deck and finally make the stove a finished product. I had a cordless drill, with a thin 3 mm drill I drilled holes along theIt was necessary so that my 125 mm pipe would fit inside, and a tightly wound basalt cord should also fit around the pipe to protect the deck from possible fire. The pipe itself was double, I stuffed basalt wool inside the pipe, and applied oven sealant around the edges. The basalt cord was also coated with sealant and the pipe was installed. A few hours later, the sealant dried up and I fired up the stove. Still, there is something in an open fire, perhaps it is our genetic memory that remembers that fire was both warmth and protection, perhaps something else. VroEverything was fine, but as the first heavy rain showed, the sealant did not hold, trickles of water treacherously flowed down the pipe. Everything had to be redone. There were two tubes of red automotive high temperature sealant on the boat. I cleaned out the rest of the oven sealant, cleaned it as best I could, degreased it with acetone, and applied red sealant. This option turned out to be much better. Even in heavy rain, nothing flowed through the pipe. 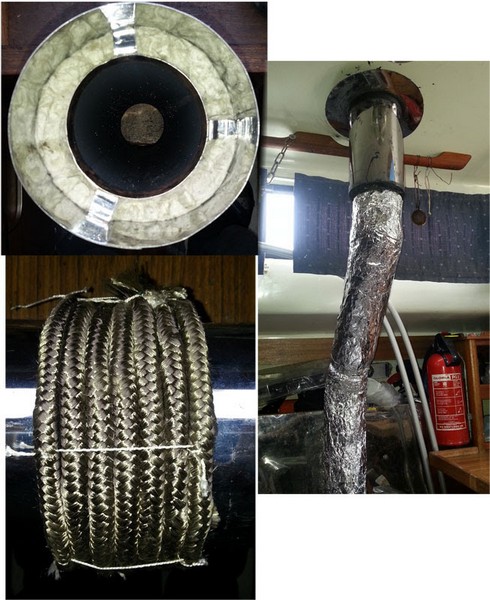 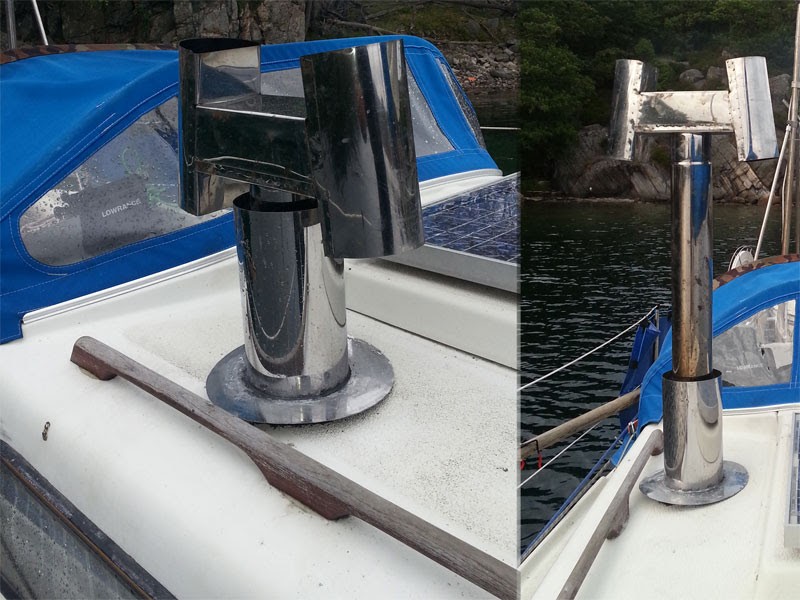 Another utility that I installed and tested was the improvement of the gennaker escapement. Two options for raising/lowering the gennaker are considered classic: a special twist and a stocking. I went the second way, but did not order a branded stocking, in Sweden, by the way, tailoring an individual stocking for a gennaker costs about 10,000 SEK. I did it a little easier. I bought a piece of thin fabric in a kiting shop, a familiar dressmaker sewed this stocking for me for a symbolic sum. And already on the boat, I made my own from a tube that yousilt from the curtain hoop. 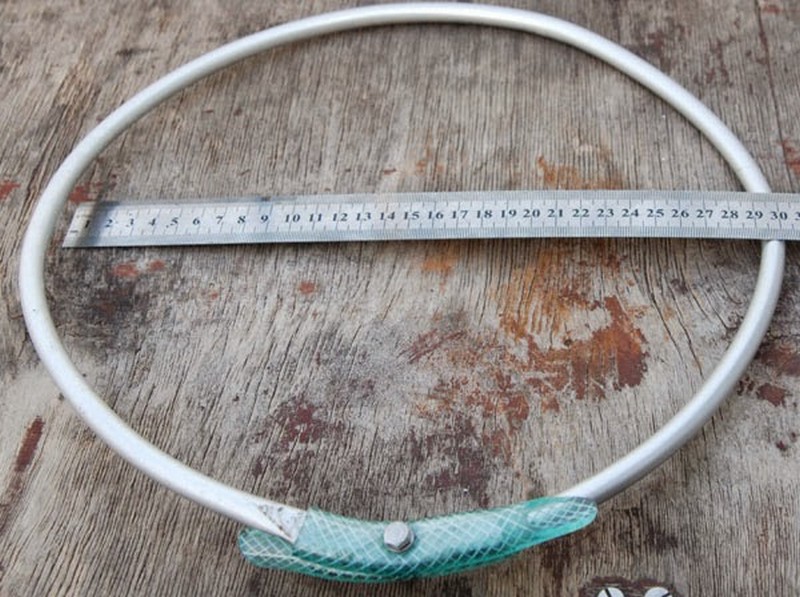 and sewed it to the stocking through a kind of cone. Next, it was necessary to put the end behind the block into a separately sewn pocket on the stocking. The block was sewn to the stocking. After that, the gennaker had to be threaded into a stocking and carefully placed in a bag. Tests showed excellent work of the whole economy. The gennaker opened and closed with a stocking, it was no longer possible to be afraid that a strong wind would dump it into the water (and it was like that at first). In general, the boat was ready for light winds. 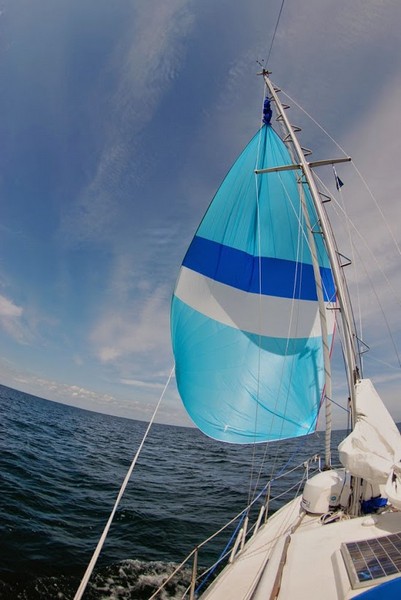 Scheme of stocking and end wiring inside and outside. 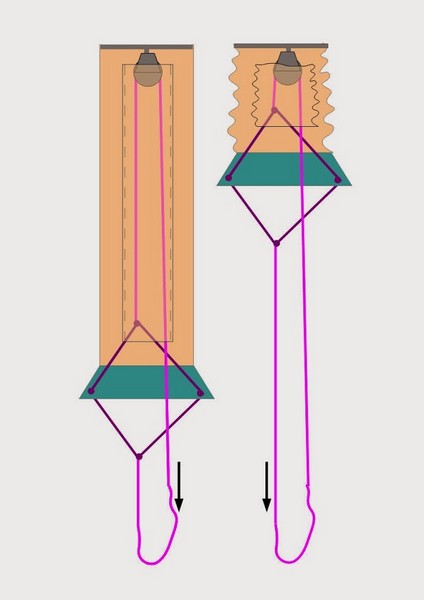