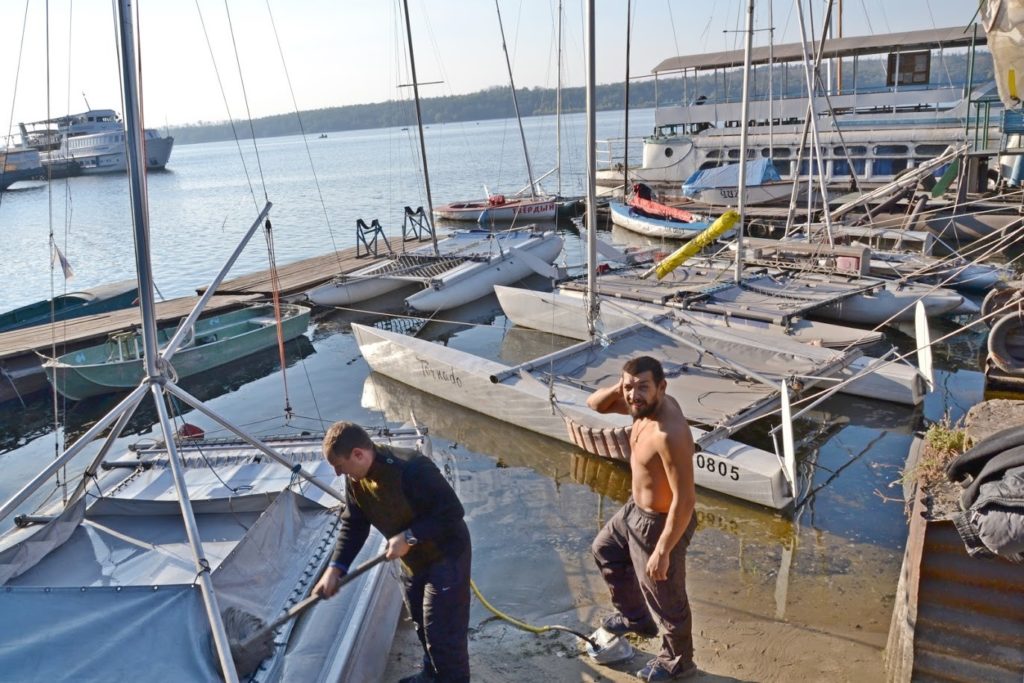 About solar panels and charge controllers

We cannot get diesel or gasoline from the sun, but if we have an electric motor, we can try to get electricity from solar panels, thereby replenishing the “fuel” for the electric motor. Slowly, but better than nothing at all. A couple of days at anchor can give the necessary energy that is not enough to come to the marina or where else the skipper needs.

First you need to understand how much energy you can actually get from solar panels. If you expect that a couple of solar panels will be enough for you to power the electric motor purely from the sun, then look at this photo: 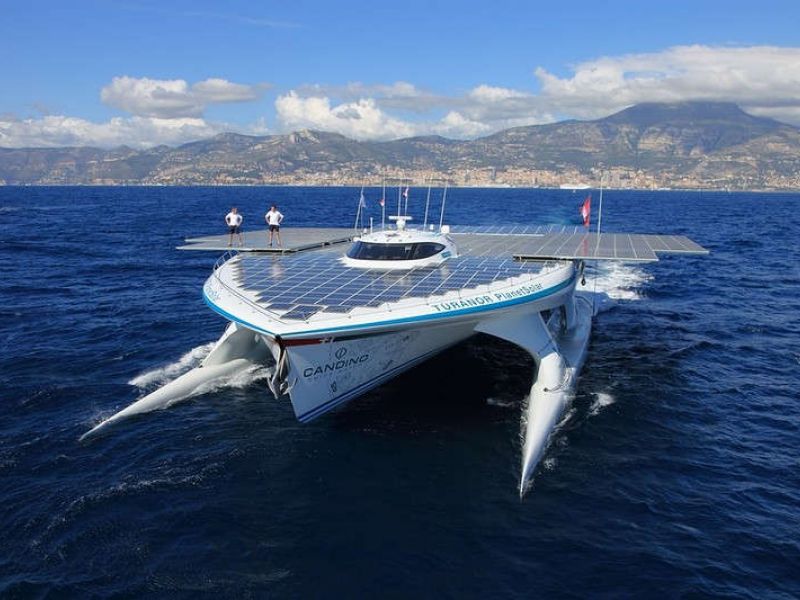 This is the area of the deck that needs to be covered with solar panels so that there is enough energy for non-stop movement on the electric motor.

For a sailing boat, this is unrealistic. It is impossible to lay down solar panels where the team walks with their feet - they are slippery and this is fraught with injuries to the crew. Solar panels are best placed on the arch above the cockpit: 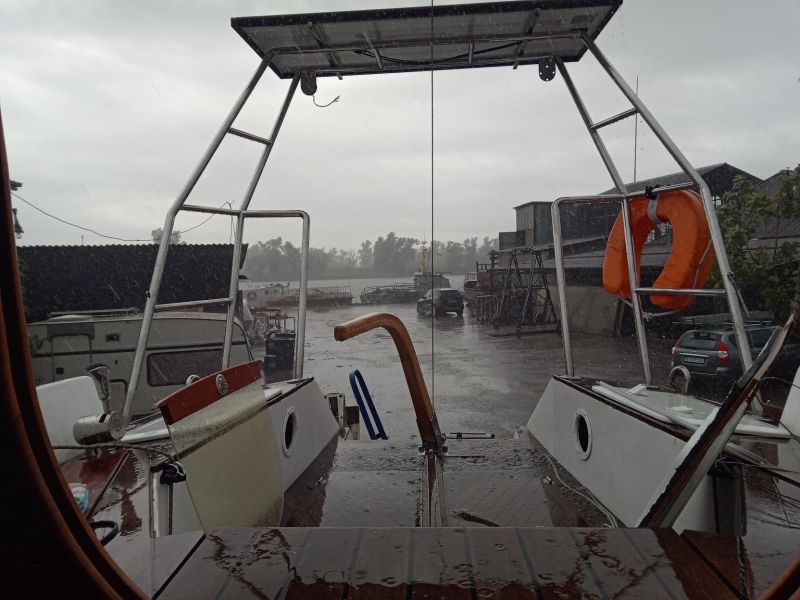 There they do not interfere with anyone and are not obscured by sails or anything else. Shading panels leads to a drop in their power.

In the waters of the Mediterranean Sea, the Black Sea and at this latitude around the world, solar panels generate energy per sunny summer day: 6 *

Those. for my 250w panel on a sunny day i can get roughly 1.5kwh of power. On a cloudy day it will be about 1 kWh . These are proven numbers.

In the northern regions, the efficiency of solar panels is very low , the area of Moscow, St. Petersburg, Sweden, England, etc. - there is very little efficiency.

If you are used to counting the amount of energy in Ah - start to wean . This is not at all correct, I explain why with a living example.

In one country, they decided to set a world record for the movement of an electric bicycle from a single charge. The stadium was chosen, representatives of the Guinness book were invited, everything was recorded officially. It was decided to set the current limit on the electric bike controller to 4A. The average battery voltage was 48V (full charge 54V, full discharge 35V). If the electric bike consumes 4A constantly, then its 64Ah battery will last for 16 hours of operation, and the speed at a current of 4A was about 30 km / h. Those. according to the calculations, the bike had to pass:

In fact, everything turned out to be completely different. With each lap, the speed of the electric bike decreased, despite the fact that the current that was taken from the battery was the same 4A. The fact is that when the battery is discharged, the voltage decreases, and the electrical power, as you know, is the product of current and voltage. With a decrease in each volt, the electrical power that was supplied to the motor decreased and the bike went slower. As a result, he drove only 360 km instead of the estimated 480 km.

In cloudy weather, it will take 1.5 times more time. During winter days, energy production will be greatly reduced.

The charge controller is needed in order to prevent the battery from overcharging and to get the maximum power from the solar panels, which generate voltage and current of different sizes, depending on the illumination.

There are two types of controllers: PWM (PWM) and MPPT.

The first type is simpler and cheaper, but its efficiency is not very high, as well as its usability in high-power arrays of solar charging systems. It requires an input voltage slightly higher than the voltage of a fully charged battery, however the voltage from the solar panels is often higher and lower than required for optimal PWM operation. Part of the energy is wasted.

The second type is correspondingly more expensive, it contains an energy transformer inside, which allows you to increase the charge current by reducing the voltage from the solar panel to the level required when charging the battery. With this type of controller it is possible to use high voltage systems from solar panels, which reduces cable thickness requirements.

If we are talking about a land system it may be cheaper to add a couple of extra solar panels to compensate for the inefficient PWM operation, however for a sailboat we have limited space for placing panels and have to buy a more expensive controller (MPPT) or put up with losses on transformations.

It is impossible to use solar panels connected directly to the battery - there is a high risk of battery failure. 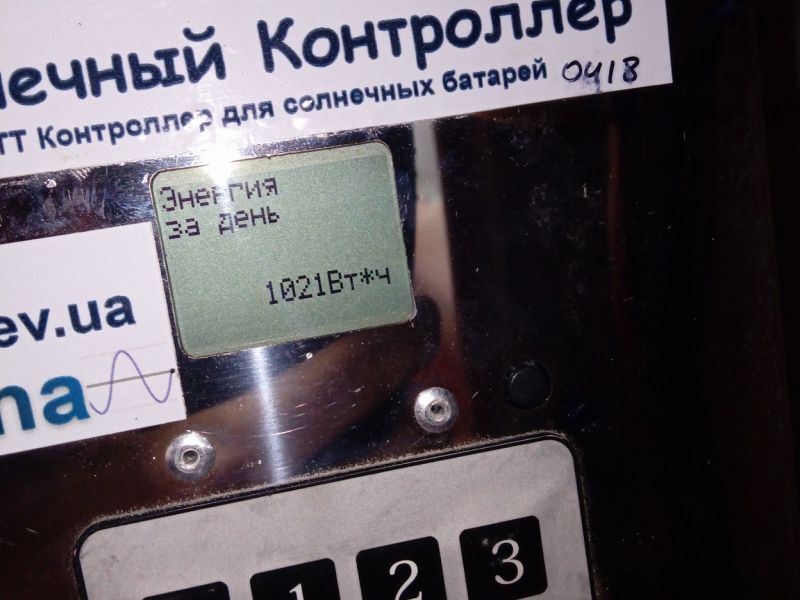 In the photo, power generation for 1 cloudy - overcast day at the latitude of the Black Sea is 250 W by a solar panel and an MPPT controller.

An important point: if you have two different groups of batteries with different voltages on your boat, make sure that the solar panels give 1.5 times more voltage than the voltage of the battery group with a higher voltage. Otherwise, they simply will not be charged from the sun, but only the second group, with a lower voltage (most likely it is 12V)