It all started in 2013, when I decided that I could afford to buy a small sports sailing catamaran, like this: 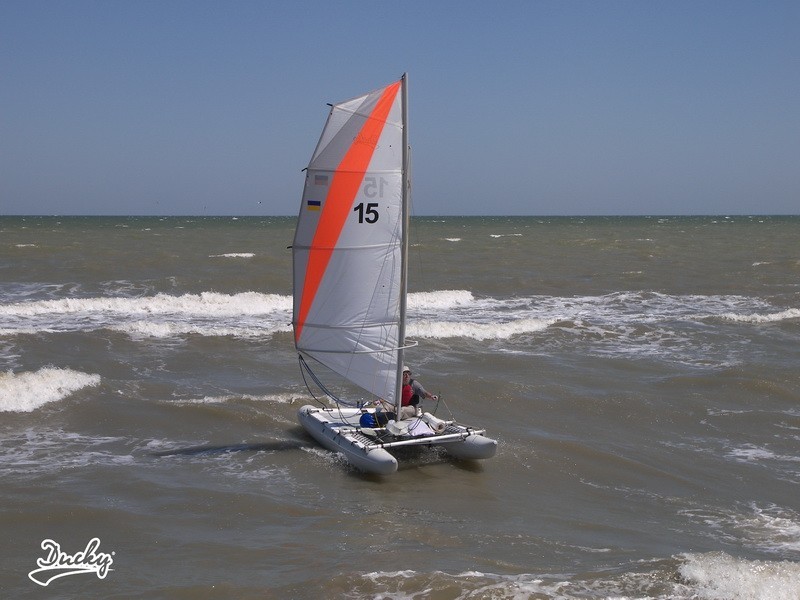 This is a collapsible ducky 15 catamaran with inflatable balloons, which is produced in Ukraine, here is the manufacturer's website: www.ducky.com.ua

However, as I accumulated the necessary amount for the purchase, I began to wonder if I really need just such a compact and portable option? It weighs 55 kg - I planned to mostly walk on it alone, but passengers can still sometimes be. I won’t take it far alone - before each ride, I will have to hire a car to deliver the catamaran to some beach for subsequent assembly. By the way, the assembly takes 45 minutes, according to what is written in the description of the catamaran on the manufacturer's website. So in this case ride steamhours will not be very reasonable, it is necessary for the whole day. Well, it was also embarrassing that on the springboard (on which the catamaran crew sits) you can’t stand and even sit is not very comfortable. Those. so you can ride for 2-3 hours, and then you want to stretch your legs.

After all these considerations, I decided to buy a sailing sailboat. It has its drawbacks compared to a catamaran: you need to pay for parking and in general it is an order of magnitude more expensive when buying, but you can even live on it :) I mean that it is not a problem to organize electricity there, it is more convenient to stay, they are not afraid of rain and etc. Another important advantage for me: it can travel far and it is more resistant to strong winds and large waves. After reviewing the prices, it became clear that with the money that is available, you can count on the old 25-35summer sailboat, with subsequent minor repairs to bring it back to normal. So, in the fall of 2013, I found a couple of options that suited the price, parameters and photos.

The first option is the Ivolga sailboat in Kremenchug; having phoned the owner, I went to his city to inspect the sailboat: 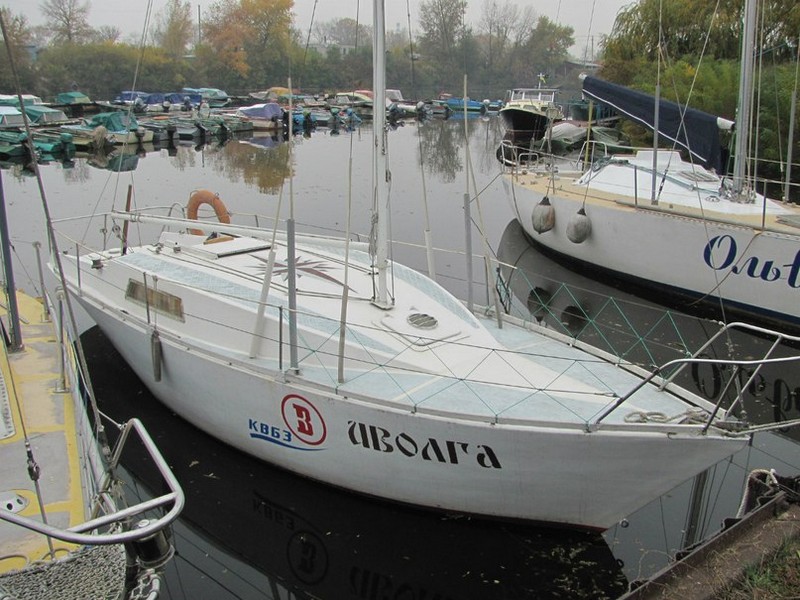 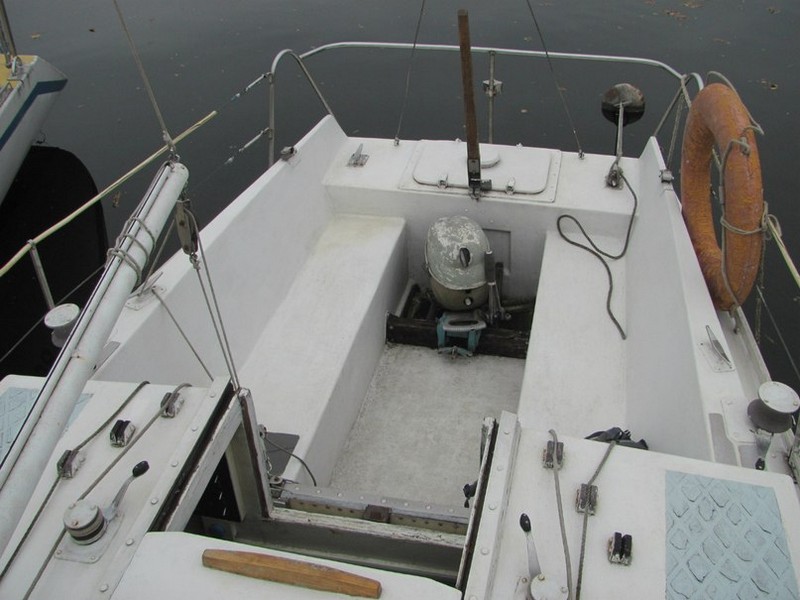 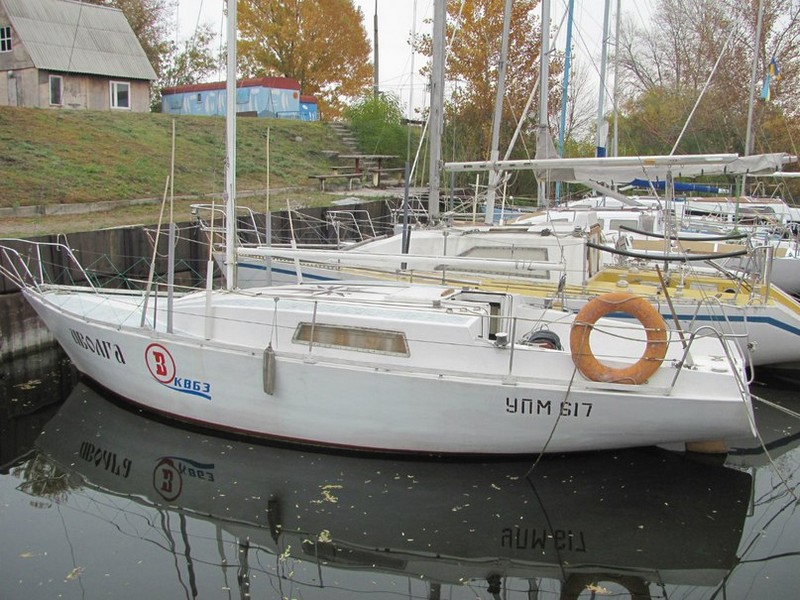 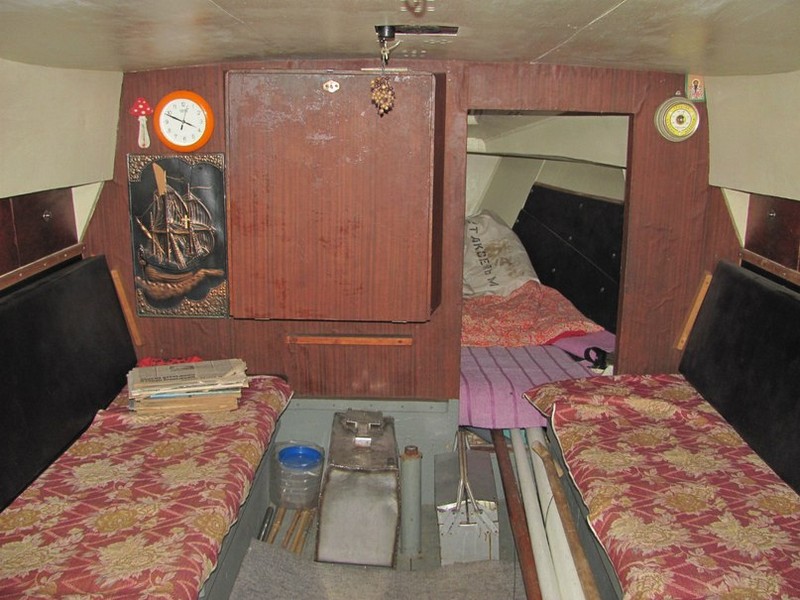 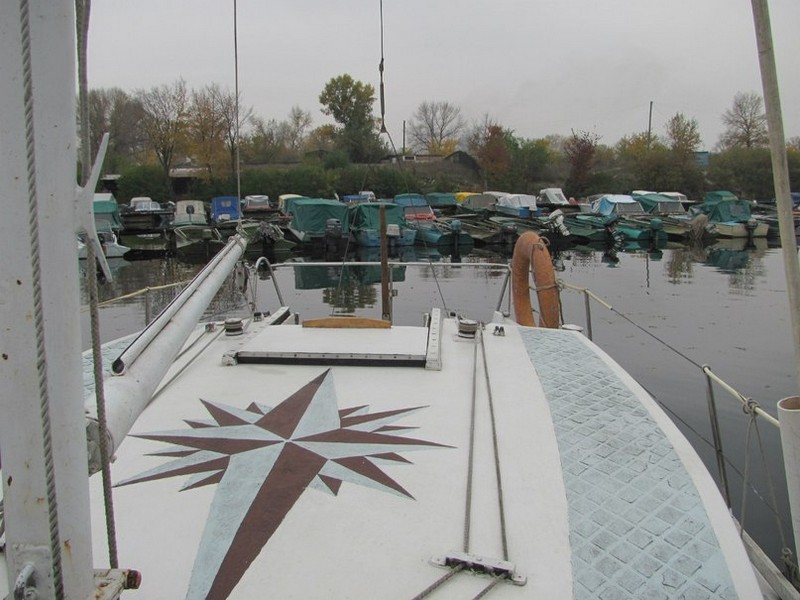 The sailboat at that time was 30 years old, it was well-groomed, it had only one owner. I found out that it was built according to the principle the thicker the better, as a result, it acquired a 2.5 - 3 cm thick hull made of pine boards and its total weight was 2 tons, of which 500 kg is the weight of the keel. The mast is made of an ordinary pipe, but with a simple blockage system (this is so that you can put the mast on the deck on the go to pass under the low Kremenchug bridge and then put it back.

Inside, it was very, very simple - a bow berth for 2-3 people, side folding sofas, a solid fuel stove (yes, on wood and coal!) And there was nothing else there. The walls of the cabin are simply painted white. Of the advantages that her owner noted was that condensation never accumulated on the ceiling of the sailboat in the morning (this is a common sailboat problem), because. the hull was double with ventilation between the layers.

And from the shortcomings: it is slow, heels strongly under a slight wind, the motor is located in an open well in the cockpit (i.e. under the feet of the one who controls the sailboat) which will lead to wet feet of the skipper and crew on the wave :) For some reason, I I didn’t like this sailboat very much and I told the owner that I would think again and returned home.

The second sailboat was in Kherson and it was sold more expensive than the first, but the pictures were prettier (the shark painted on board was no good, but still repainted in a year, so ...), the last photo shows its owner, whose name is Yaroslav the Wise (nice name, by the way). This person behaved, to put it mildly, somewhat strange, but I will write about this in another article, later. 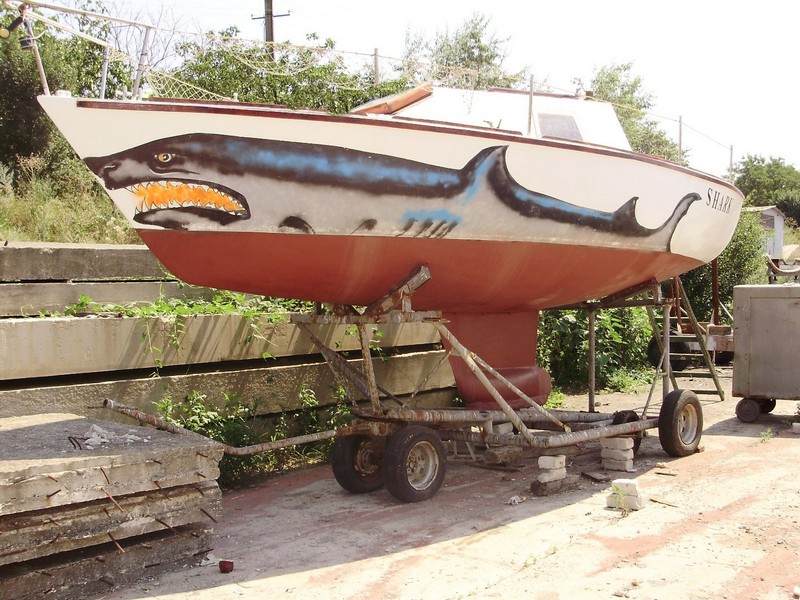 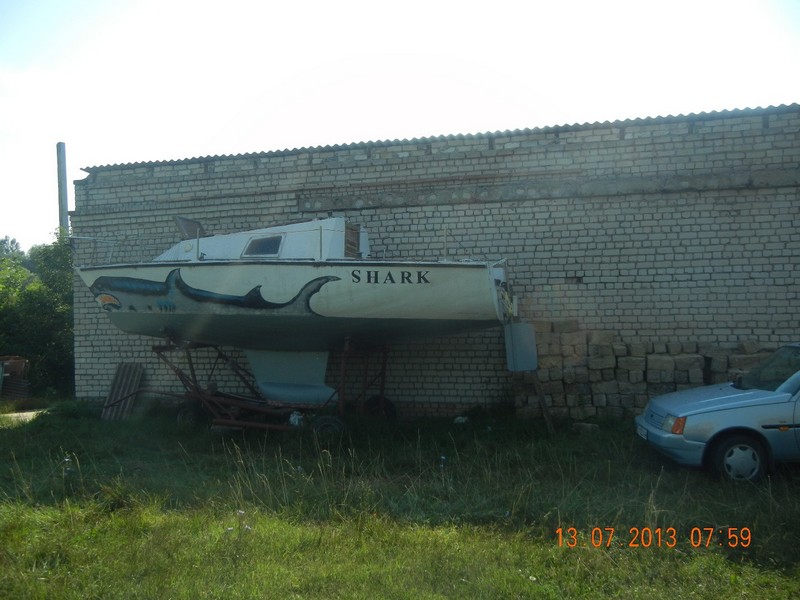 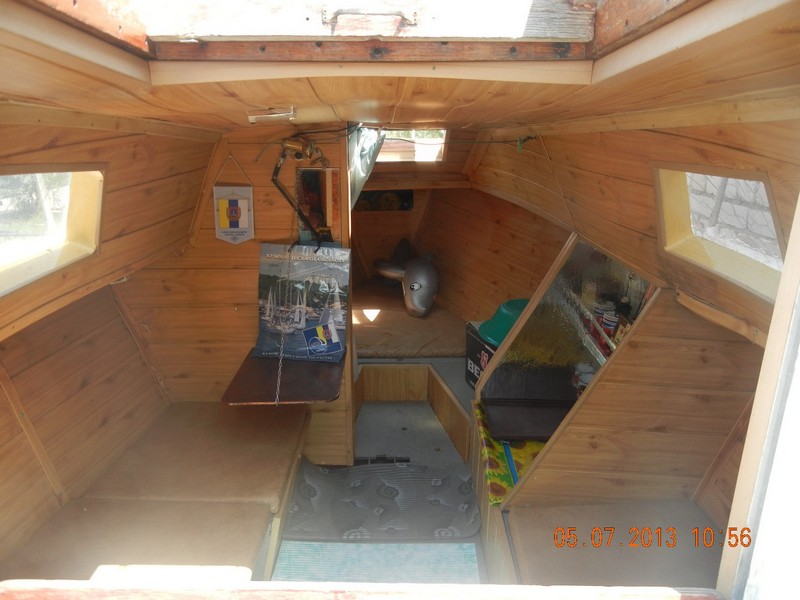 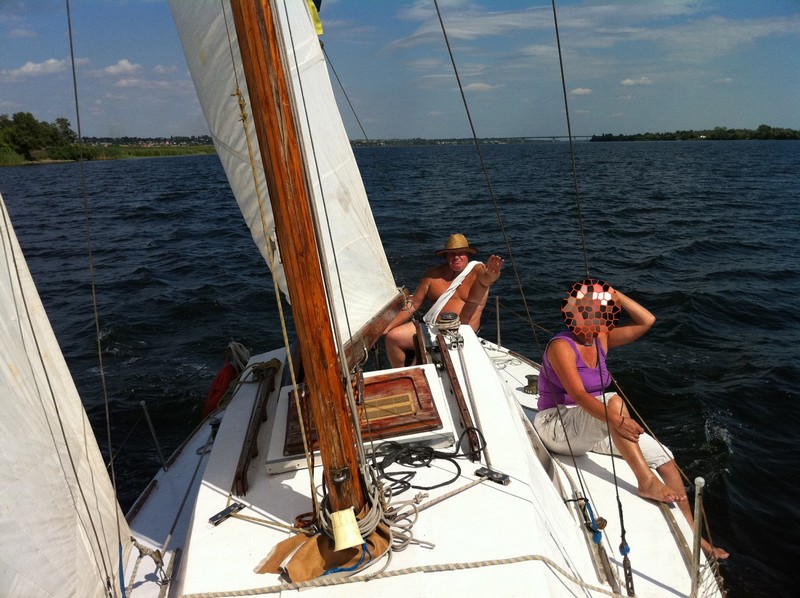 Having looked at the sailboat with my own eyes, I could not help but notice that it no longer looks as fresh as in advertising photos: 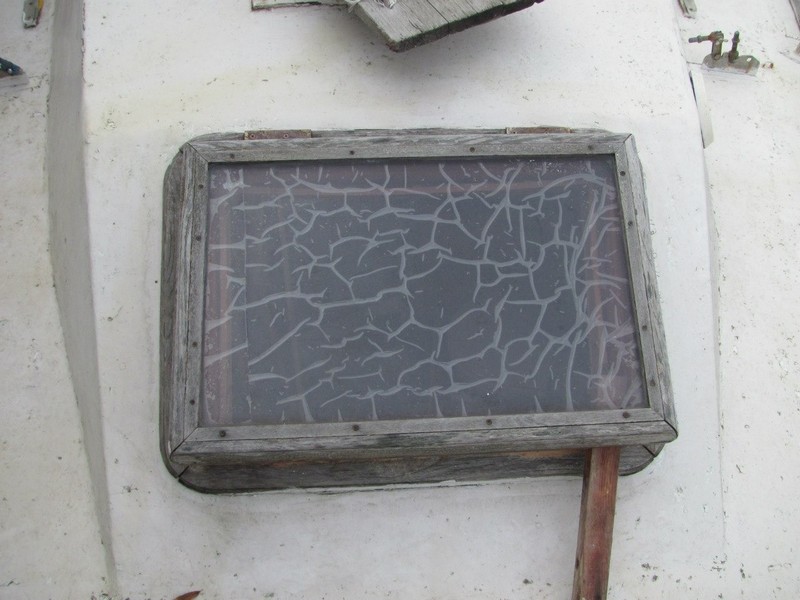 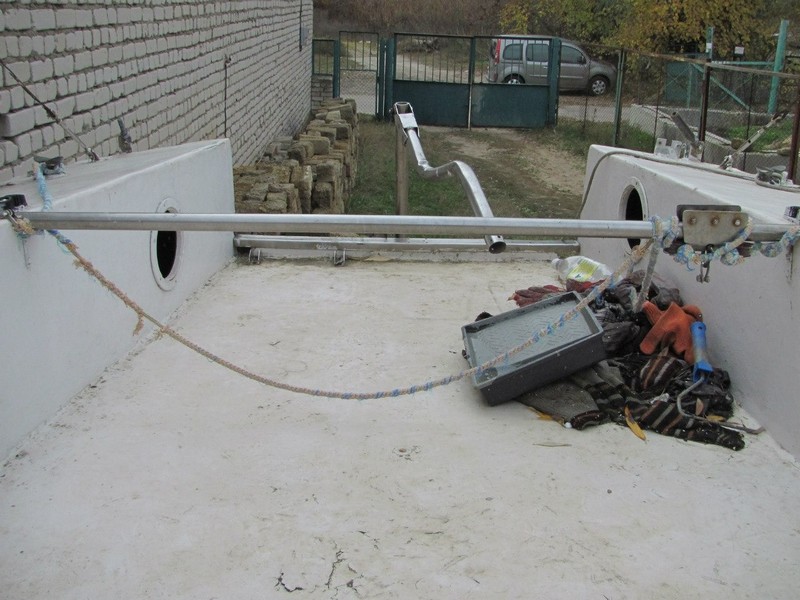 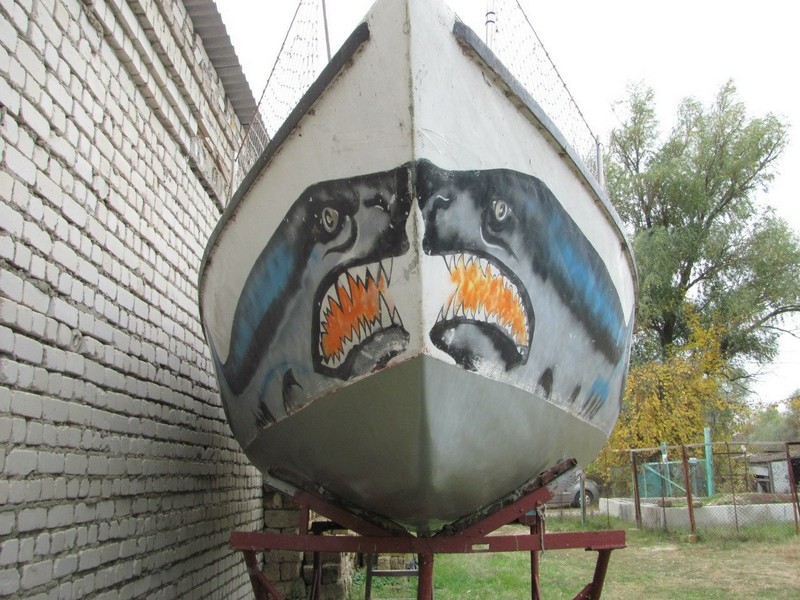 It can be seen that the paint is no longer good and will have to be repainted immediately, in the spring, when it gets warmer. In addition, I was haunted by a crack on the nose (later it turned out that this was not a big problem, but the big problem was completely different).

This sailboat was slightly wider and slightly shorter than the first, with a more spacious cabin and a larger cockpit (an open space on the sailboat where the crew sits). In addition, unlike the first sailboat, this one was built according to the well-known project in the past (usually sailboats are built according to drawings that can be bought or, in some cases, obtained for free via the Internet) ST-251. CT stands for sports touring, the number 25 is its length in feet (7.62 meters) and the number 1 at the end is that its body is made of wood. Judging by what I found on the Internet, a couple ofen sailboat. There are not many reviews on the Internet about such sailboats, but they are good. I did not find a single one who would find fault with some significant technological miscalculation. Further, I met the owner of the same sailboat from St. Petersburg via the Internet and he also confirmed that the sailboat is very seaworthy and fast. Probably, this was the decisive factor that determined my future fate and the fate of the Shark sailboat :)

The former owner of the sailboat said that it does not flow and it is definitely on the move (in the end, this turned out to be not entirely true, but more on that later). I showed pictures of her at a sailboat club in my city, but the local shipowners couldn't say anything definitive about her condition, they had to see it with their own eyes (that's absolutely right!). I agreed with one owner of a Zaporozhye sailboat to come with me and inspect the sailboat before buying. As a result, he did not find any serious problems (looking ahead, I’ll say that I had to look deeper) and yes Il prepayment (planned to give the rest of the money in the spring).

The sailboat will stay in its place in Kherson until spring, and after the calculation, I will take it to my city. By the way, a few words about the methods of delivery: if you carry on the road on a trailer, then you need to issue a special permit in the traffic police, because. its dimensions in width are more than the permissible 2.5 meters (the sailboat is 2.7 meters wide), and this in our country means the need for a bribe, not to mention the fact that hiring transport will also not be cheap. The second option is to transport the sailboat on the water under its own power, and organize the delivery of the trailer from the sailboat along the road, and I stopped on it. photo of penproject ST-251 and some parameters: BASIC DATA OF THE YACHT "ST-251". (in parentheses - data of the tourist option) The maximum length, m - 7.78 (6.98) 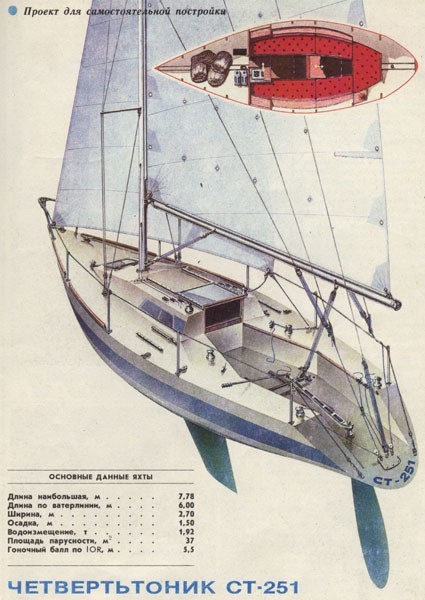 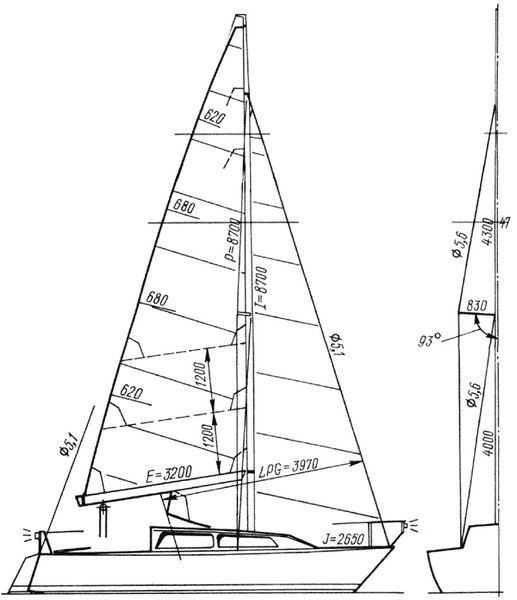 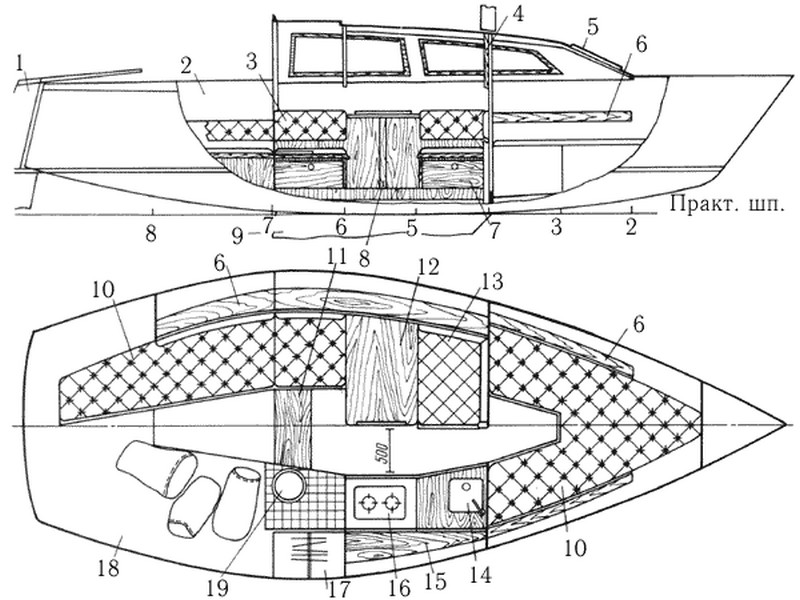 This is where the story of 2013 ends, I started earning the money needed to repair the sailboat and the fact that I still owe it to its owner. Lastly, a photo of how she was sheltered for the winter. 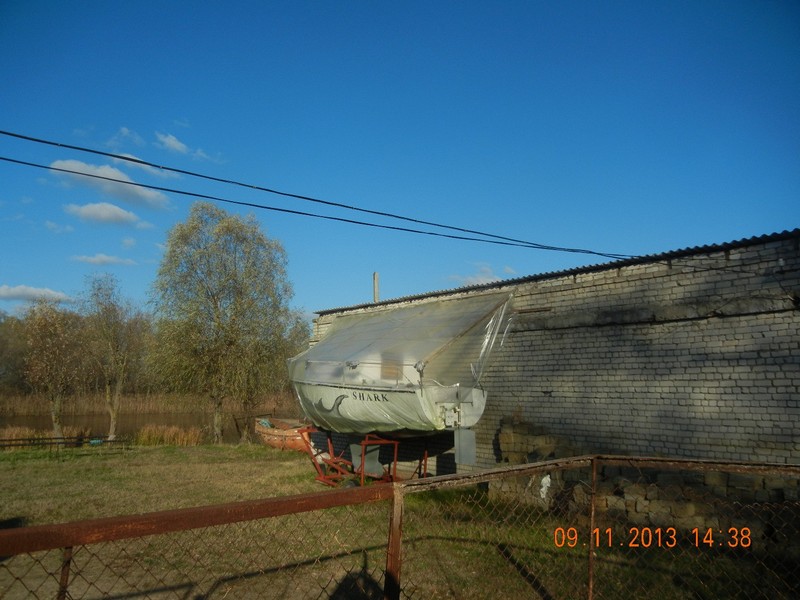