We continue to repair the sailboat.

Things are moving forward, with teak the deck looks much more interesting. 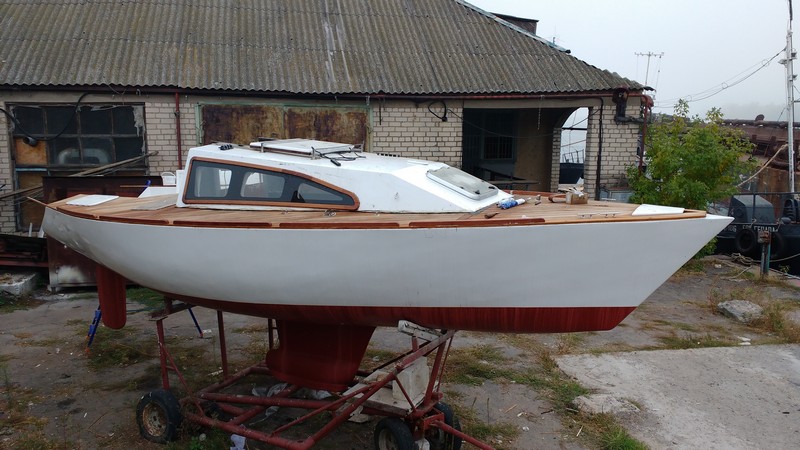 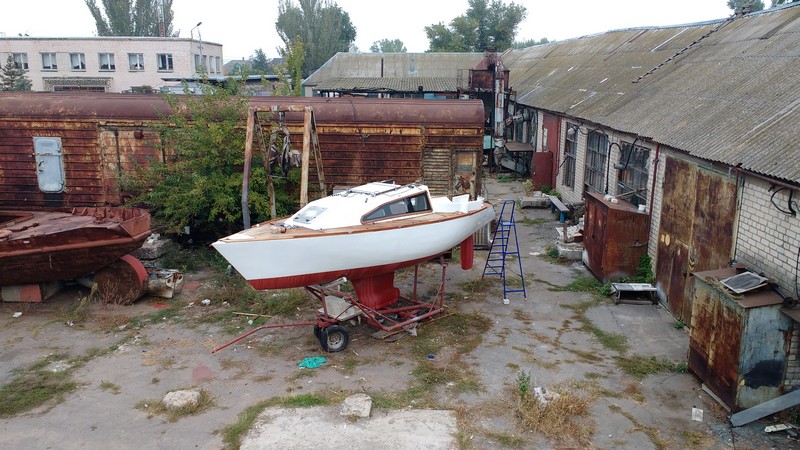 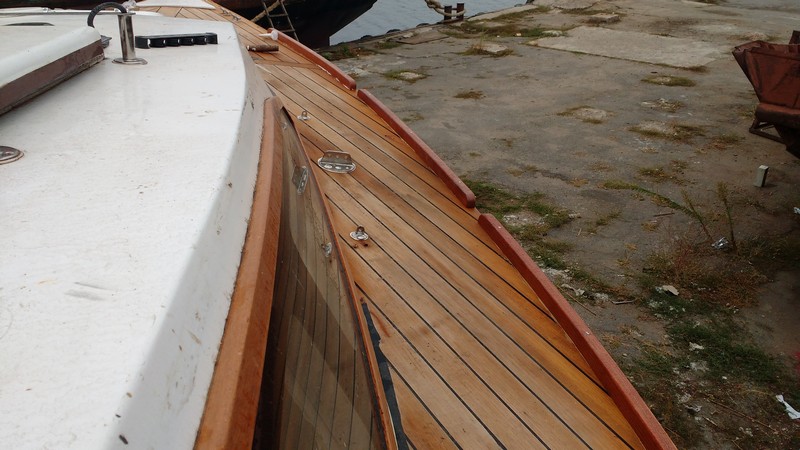 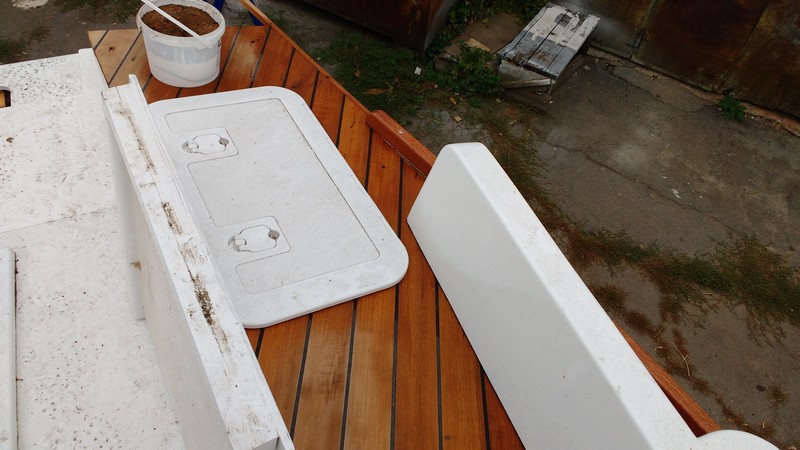 Teak was laid in a "herringbone" pattern because the slats are wide and thick and you can't bend them without cutting each one. It is much cheaper to lay down a Christmas tree and looks good too. 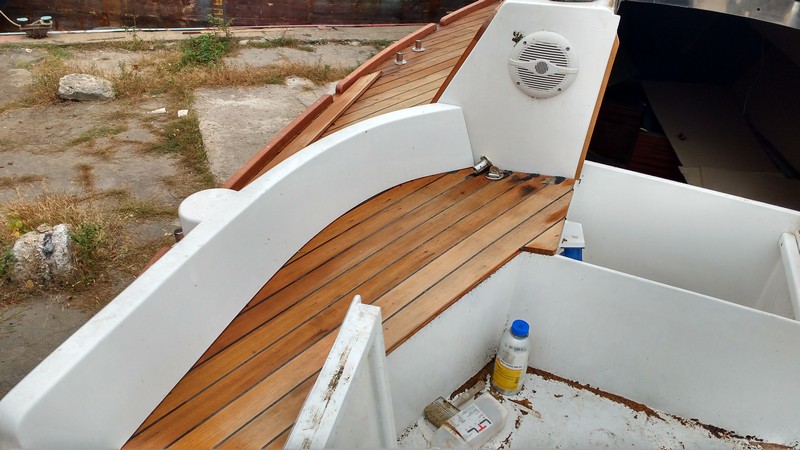 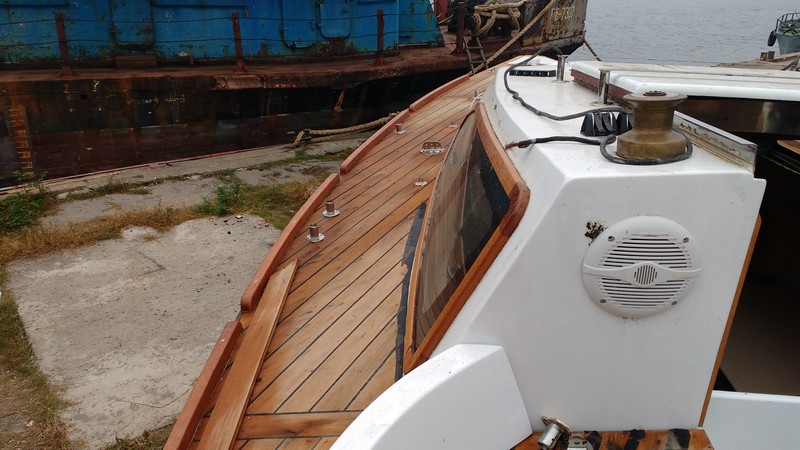 The cabin is almost ready: 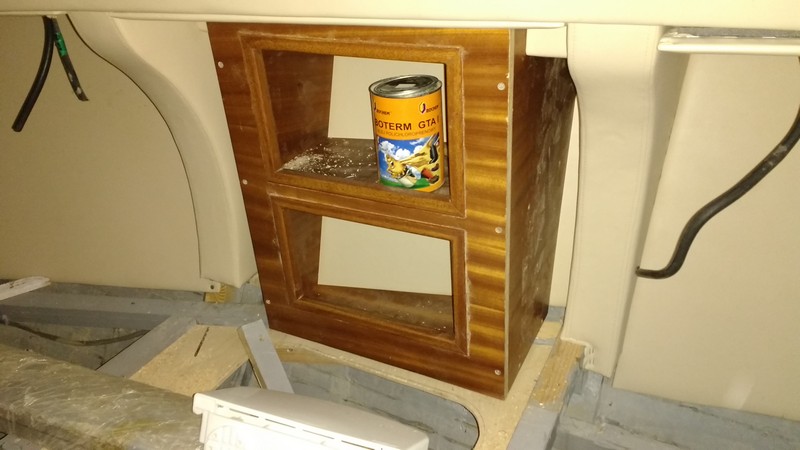 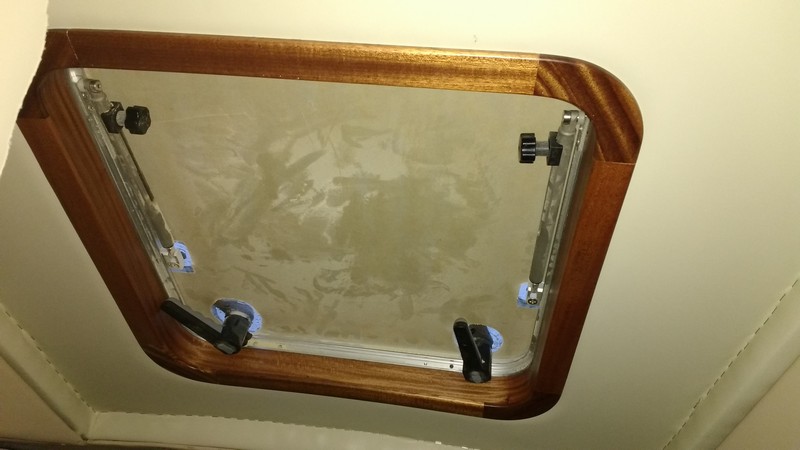 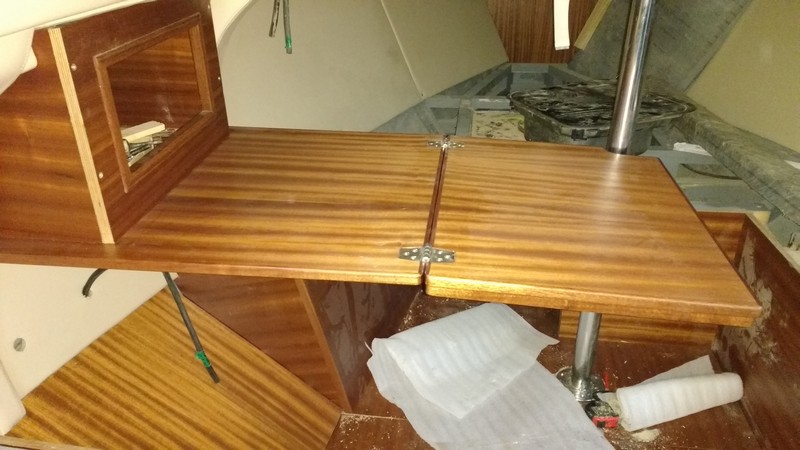 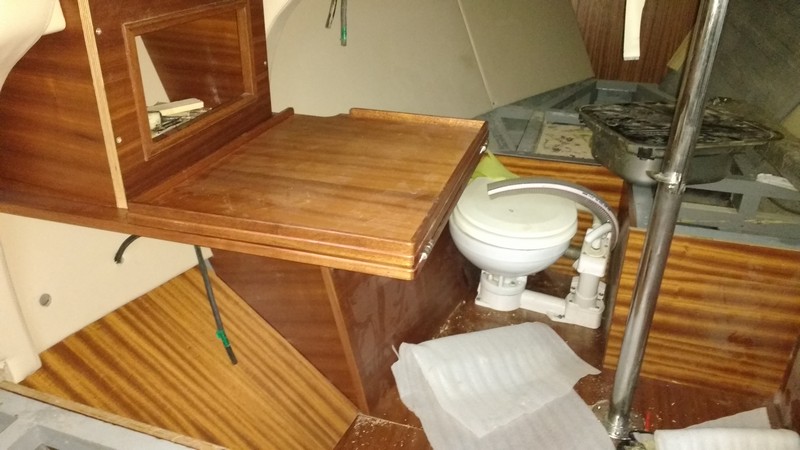 They laid the mast, did not have time to try it on before the cold weather ... They left it for the spring. 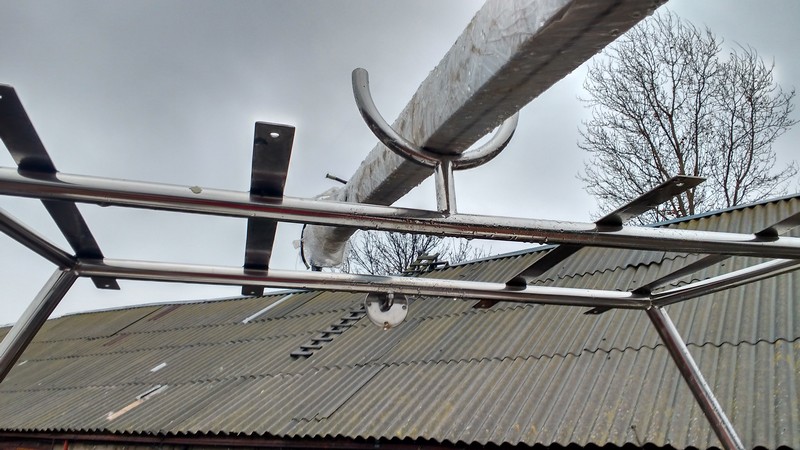 A cutout had to be made in the bow structure so that the anchor box hatch could open. I didn't think of it right away. 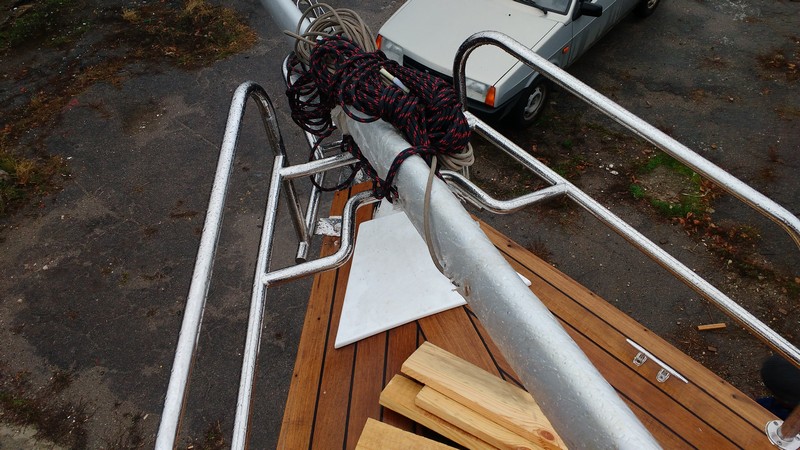 "Cradle" for the mast at the stern. The mast is planned with a blockage system on the move, for passing under low bridges.

Another part of the work on the cabin is done. These are the first photos of 2017, winter: 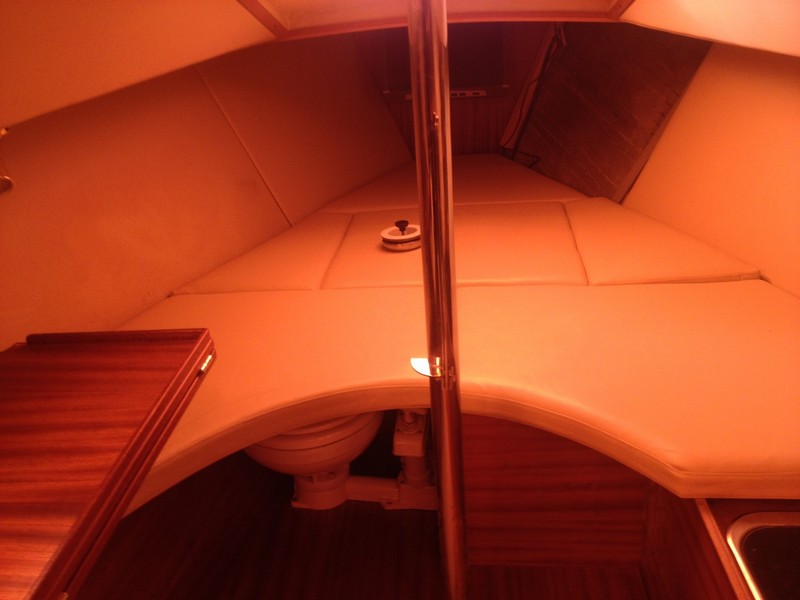 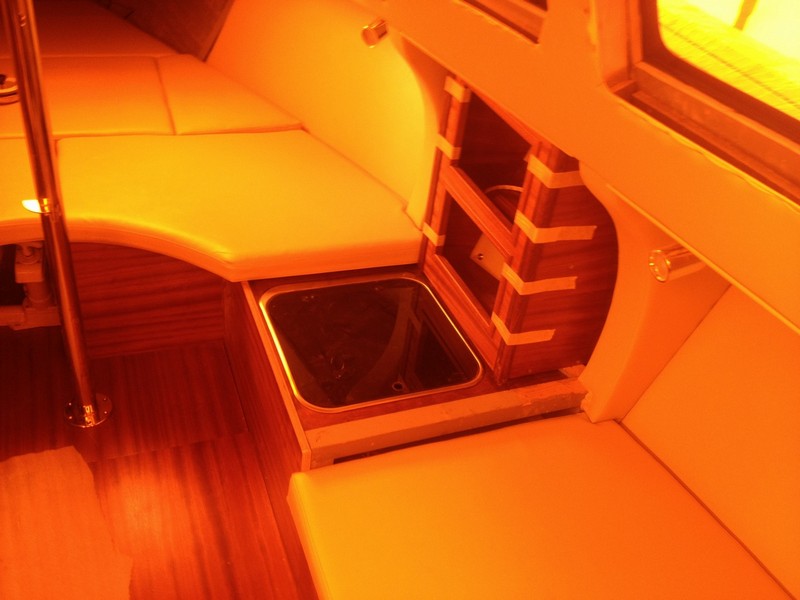 Folding table on the port side (navigator's place in combination) 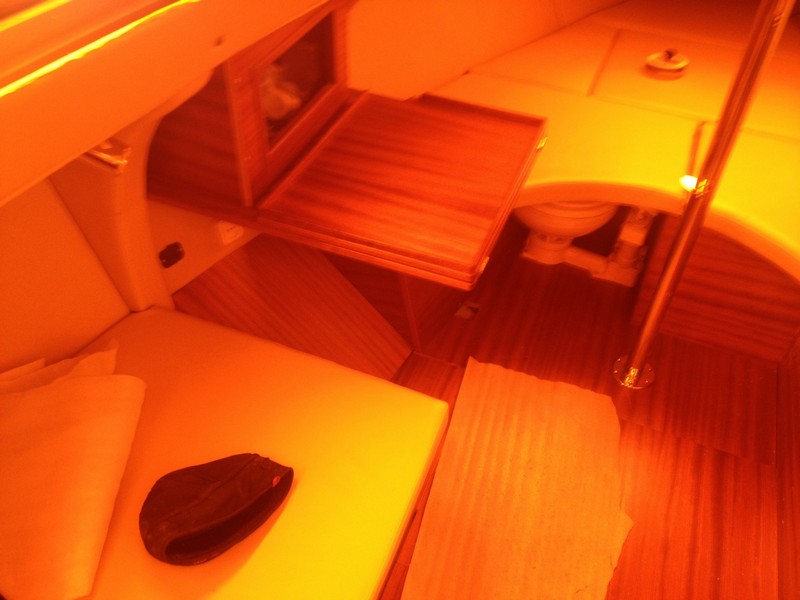 On the wires while the chartplotter hangs 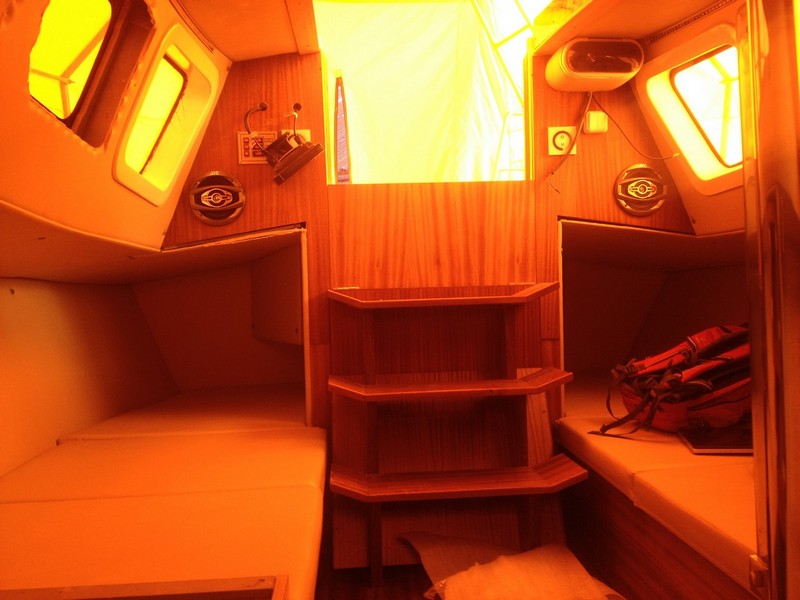 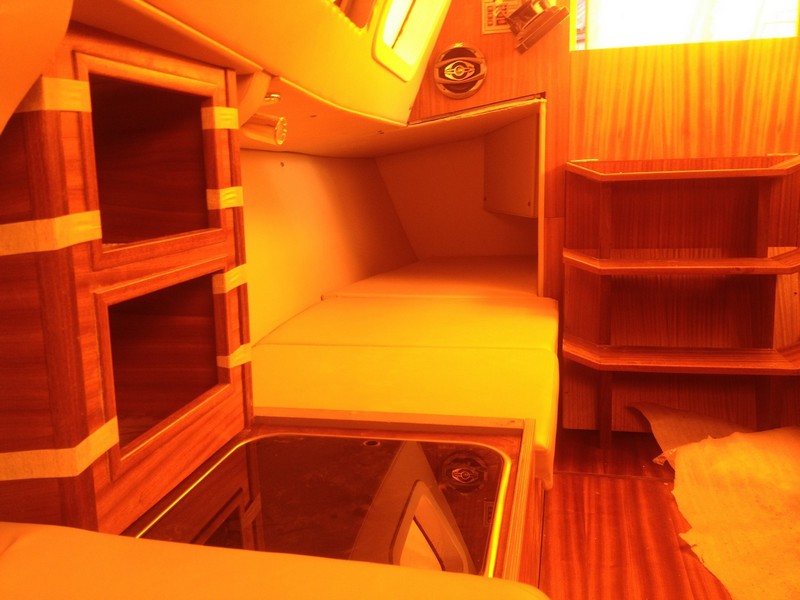 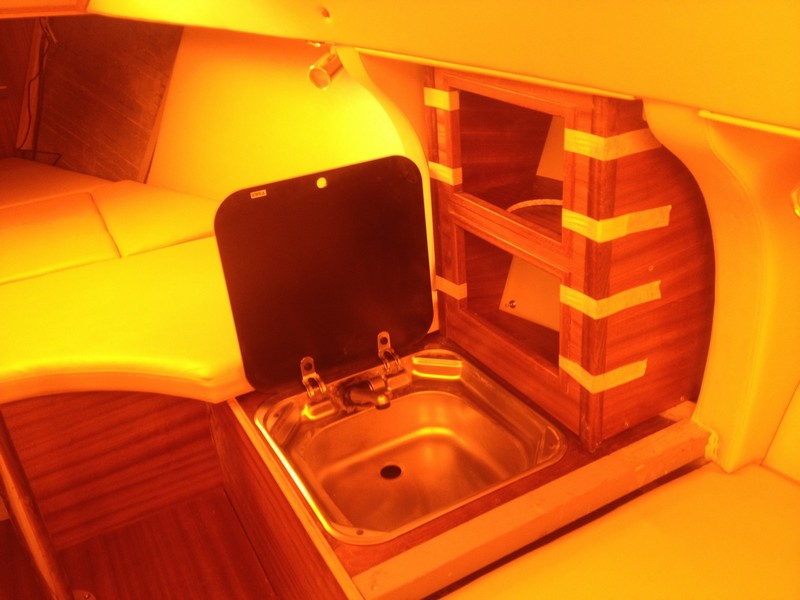 Installed the radio, connected to the speakers - everything works, the sound is very loud. 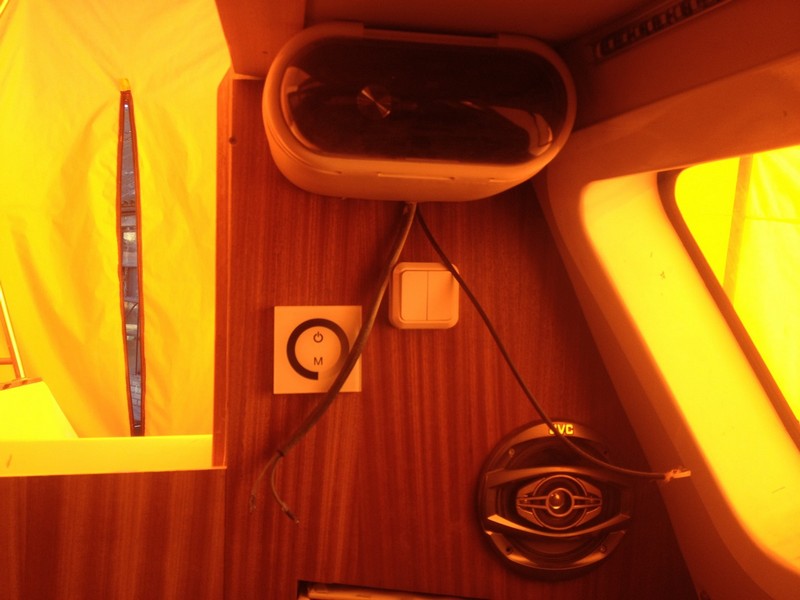 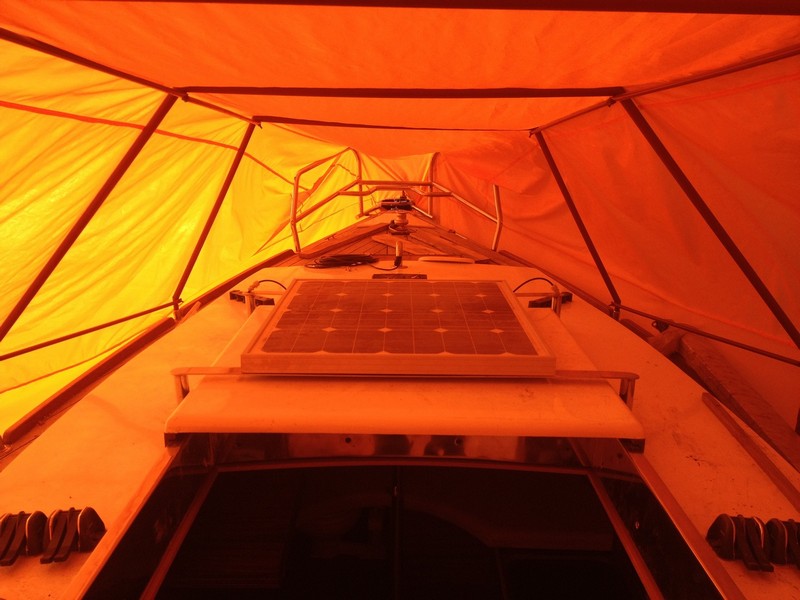 I must write that the contractor was the company YUG-tent. After my experience with them, I would never recommend anyone to work with them again. The manager behaves in a boorish way, does not take into account the client’s terms of reference (I had to swear so that they would make me enter the tent with a zipper), the installers lack engineering thought almost completely - two days after installation, the awning broke, despite the fact that Maxim warned where the weak points were , he was ignored. They took too much money for such work. Total distrust in regards to the payment for the tent from the manager, Mr.anichit with paranoia. Do not repeat my mistake, if you need an awning, order from someone else. 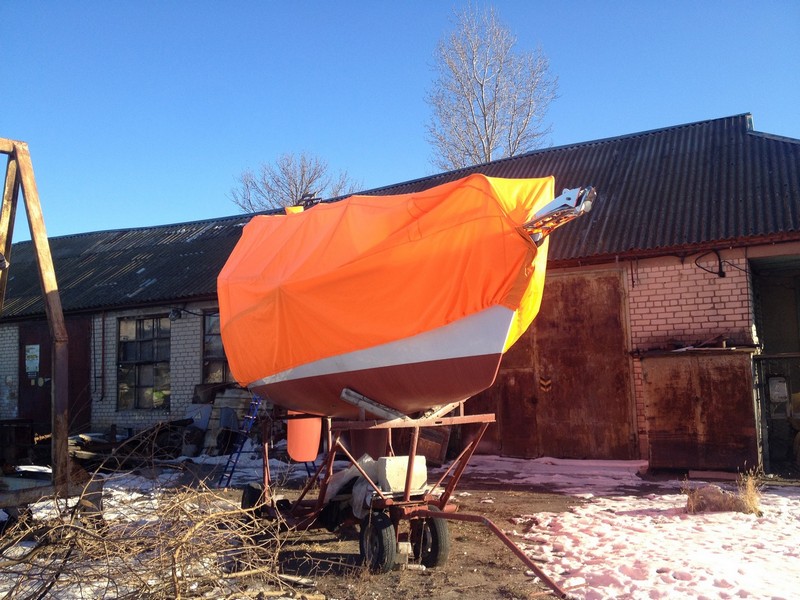 The awning is quite transparent and under it the solar panels provide some current (about 1 A) in sunny weather.

Now you can write about the electric motor, why I decided to install it and the rationale for the practicality of such a decision.

Hull dimensions impose certain restrictions on the engine and equipment weight of the sailboat as a whole. The case is small, only 8 meters long. Everyone who went to sea knows that an outboard engine on a transom is not the best solution for cruising (I'm not talking about racing now - every gram counts in weight to the detriment of convenience and reliability). The motor on the transom can periodically emerge from the wave, which leads to a loss of traction and is harmful to the engine, because. works without water cooling during such periods. In addition, the emphasis of the screw on the transom is worse than to the prI measure under the body, where they put the screws from the stationary engine. Some sailboat builders use a trick - they cut a “well” in the hull under the cockpit, into which the outboard motor is installed almost permanently. This solution has strengths and weaknesses:

The strengths include the best thrust of the screw, the absence of the need to hide the motor every time in the parking lot (passers-by people are different, maybe someone just lacks the motor for complete happiness and you can be left without it), the placement of the weight (outboard motor 6 hp). weighs about 30 kg) closer to the center of the hull, which has a positive effect on the weight distribution of the sailboat.

Weaknesses: there are no folding propellers for outboard motors, a conventional propeller will greatly slow down sailing, it also becomes necessary to organize an engine purge and exhaust outlet. Also: the outboard motor is not designed to be permanently immersed in water - metal corrosion will occur.

Another option is to install a stationary marine diesel or gasoline engine. For a boat of this size, this option is not very suitable, because. the weight of a marine diesel engine, even the weakest of those that are on sale, is about 110 kg with a gearbox, and the price is 4 thousand USD. There is only a 2-stroke gasoline marine stationary engine of the required power, which has a high gasoline consumption compared to 4-stroke ones.

I do not consider options with diesel and gasoline engines from walk-behind tractors due to their low reliability and short engine hours.

And finally, the option to install an electric motor. After re-reading many English-language forums, I came to the conclusion that it makes sense to install an electric motor on a displacement vessel, which includes cruising sailing sailboats, provided that lithium batteries and an optional gasoline generator are used to increase the operating time of the motor. As with all solutions, there are strengths and weaknesses.

Advantages of an electric motor:

An example of a good implementation of an electric motor on a sailing sailboat, which is what I aspire to (English) - link

The decision has been made, I will install an electric motor with a drive on the propeller shaft through a simple gearbox.