This article as a whole will be rather sad, as well as the next one :) This is due to the fact that I gradually found out the real state of the sailboat - to put it mildly, it was not very good))) The winter turned out to be successful and I managed to earn the required amount of money, so I thought at the expense of finding people who will be engaged in the repair of the sailboat. I had very little experience in working with wood, and with sailboats in general zero, I didn’t see much point in taking on repairs myself. In addition, I had a good job that I did not want to quit for the sake of repair (to combine thatsome work and repairs are unlikely to succeed, there just won’t be enough time for everything). Internet searches led me to the Kherson firm of Maxim Kravchenko, here is its website - www.carpenter.com.ua Looking ahead, I must say that this person is very well versed in his business and always goes to a meeting in contentious issues. Basically, his company is engaged in the production of furniture, but also takes up work with wooden sailboats. Added photos taken from his website. 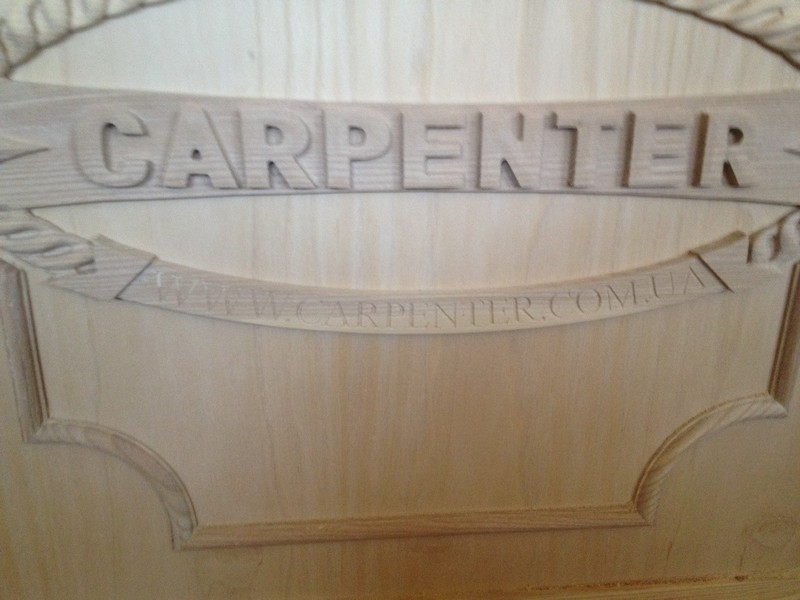 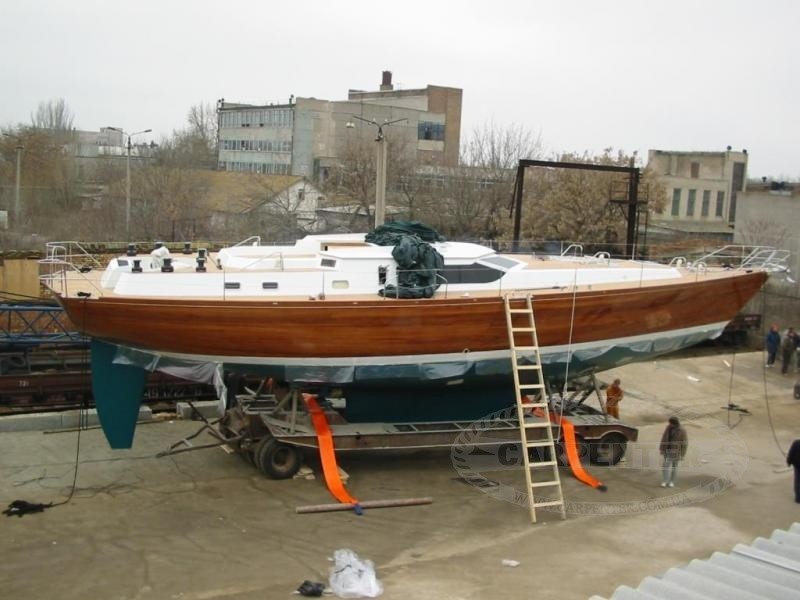 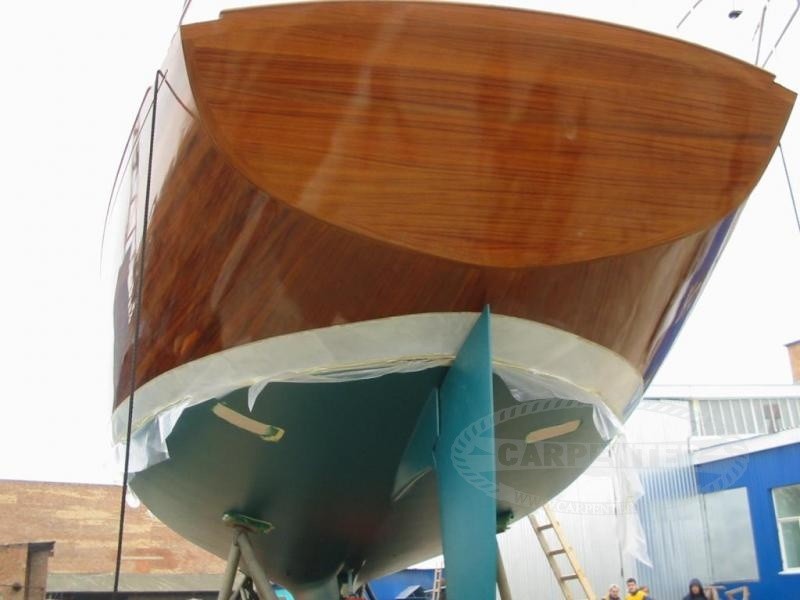 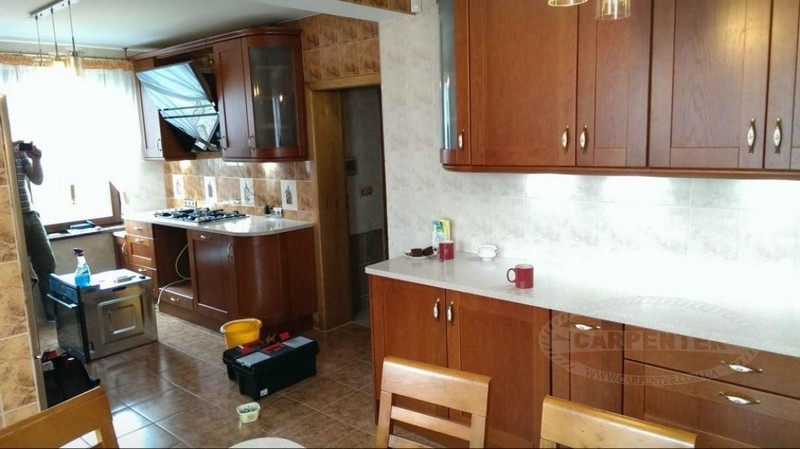 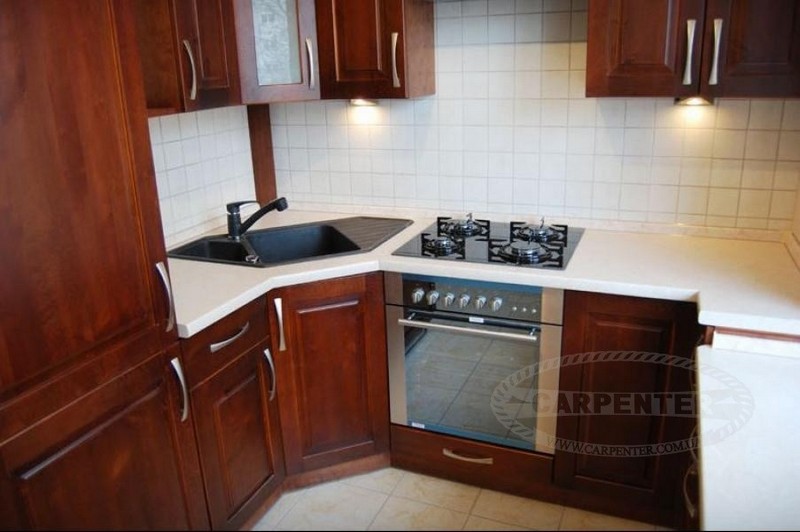 So, I arranged a meeting with the owner of the sailboat and Maxim in Kherson. We looked at the sailboat after wintering, it turned out that the canopy, which was made by its owner (Arkady), was torn with snow and there was water in the sailboat. Naturally, Arkady immediately said that the prepayment that I gave him, his son had already lost at cards, so he couldn’t give it back))) I talked with Maxim, he suggested changing the hatches, because. the wood from which they were made is already rotten. I wanted to lengthen the sailboat by building up the stern like a sports version (remember, I had a tourist one), this should add yahthose stability on the sea wave, as well as change the rudder blade, because. it was very small and had a crack on the stock (rudder blade axis), which could lead to an unpleasant situation on the wave. I agreed to give Arkady the second part of the money after the completion of this work, which should have taken a couple of months according to my estimates (which I made based on what I then knew about the sailboat). Maxim could take care of wood, i.e. main hull and furniture, but with fiberglass (which is wrapped around the wooden hull of the sailboat to achieve complete watertightness) it does not worktal. For this, another company was needed, and through Maxim I met Nikolai, whose company is engaged in just such work. I can also recommend Nikolay for work with sailboats - later it turned out that his people do the work efficiently and quickly. Repair of the sailboat could not be carried out where she wintered, because. she stood on the territory of the children's sports club and they will not endure the inconvenience from the noise and dust that will inevitably be during work. Maxim advised to move the sailboat closer to his workshop - they rent a month thereand for sailboats it will be convenient to repair it. Arkady volunteered to deliver the sailboat by water (because I have a job in another city, I didn’t have enough time to do it), and I started ordering a crane for launching the sailboat and lifting it at the repair site. Having agreed on everything, I went home.

The transportation of the sailboat was not without problems, I was kept informed by phone. They could not get through to Arkady after launching, because he was very busy bailing out the water coming into the sailboat :) He was with his wife, together they delivered the sailboat under a motor to the place of lifting. Arkady said that water is poured through holes in fiberglass, which we dug before buying to find out the condition of the plastic. I think it was not only this, but I was still far from understanding the full scale of the problems :)In time, they brought a tow truck (Arkady agreed on this, and I paid for the crane and the tow truck). I must say that even though the mast was stored in the boathouse, it was in a C-grade condition. It was made of wood and a shashel wound up in it, which was not exhausted in time. As a result, the condition of the mast inside was a mystery to me - how much wood he ate is unknown, because. it is not visible from the outside. I then thought that maybe in the future I will order an aluminum mast instead of the one that is. From that moment, work began on the repair of the sailboat, and I continued to earn money, because.I felt that they would still be useful to me)

A month later I came back and saw that the stern had already been lengthened and the new rudder blade was ready, but the fiberglass had not yet been applied. During the installation of the stern, Maxim said that there were small rotten places in the tree of the sailboat on her stern and asked what to do with them? In general, I decided to pay extra, but so that there was no rot in my sailboat, so he cut out the rotten wood and replaced it with fresh. The first photo shows the elongated stern, the rest of the rudder in the workshop and already installed on the sailboat. 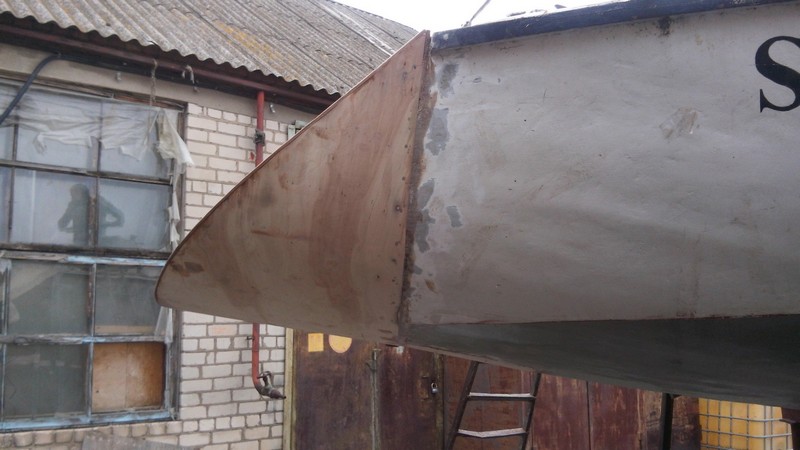 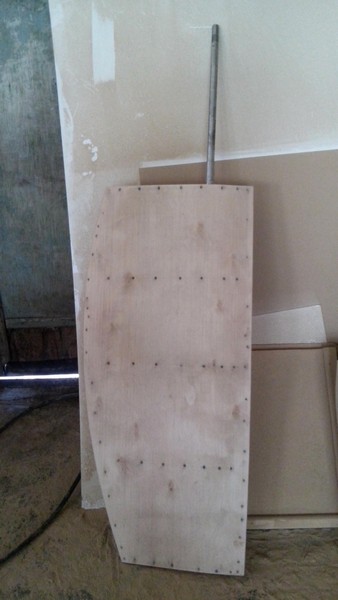 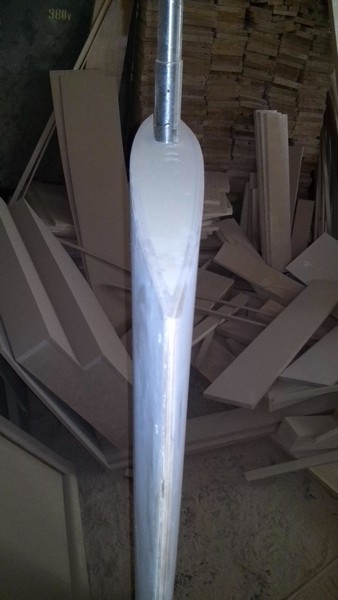 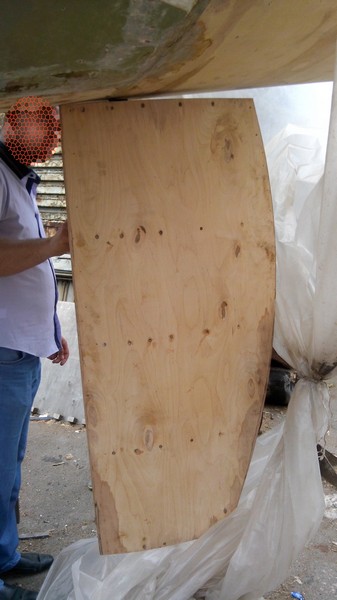 When it was ready, I asked Maxim to calculate how much it would cost to update the cabin from the inside, because. it was sheathed with cardboard clapboard, which went in waves due to moisture. I had some money to make and wanted a nice cabin with cabinetry veneer. Maxim estimated it in xxx hryvnia and I agreed. Hmm, if I didn't want to remake the cabin, I would not have found out the following so soon :) In the process of disassembling the old cabin, a curious thing turned out :) The deck was almost completely rotten and was held only by fiberglass. Again the question aroseto do with it. With such a deck, the reliability of the sailboat is extremely low, with strong wind and waves it can end badly, not to mention simply that it is simply not pleasant to walk on a sailboat with such a deck. Sighing, I asked Maxim to calculate how much it would cost to replace the deck with a new tree ... It turned out that this year I would hardly be able to ride it. I invited Arkady to come and look at the repair of the sailboat, but I didn’t manage to come to the sailboat at the same time, he came without me. I do not think that he was very surprised to see her condition. I pI didn’t know that I got far from a gift, but I thought that it would not be so expensive to bring it back to normal (I rethought this many times later :)). I am attaching a photo... 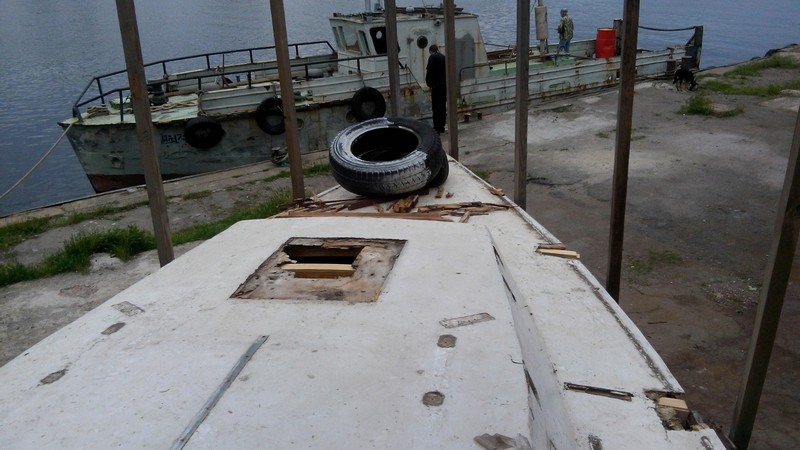 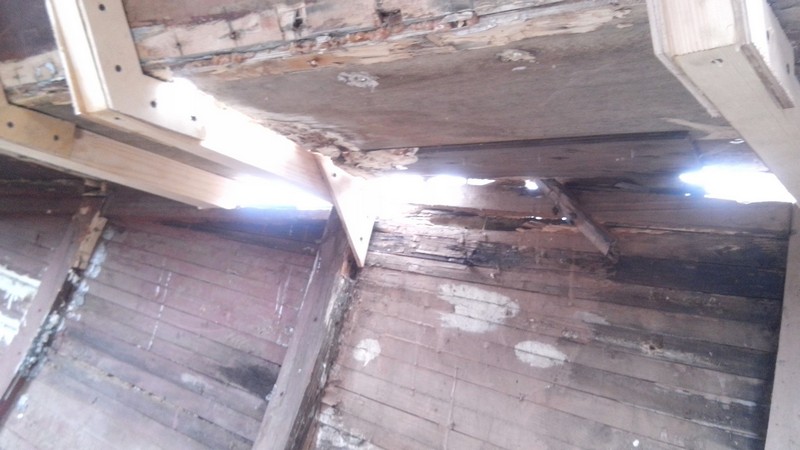 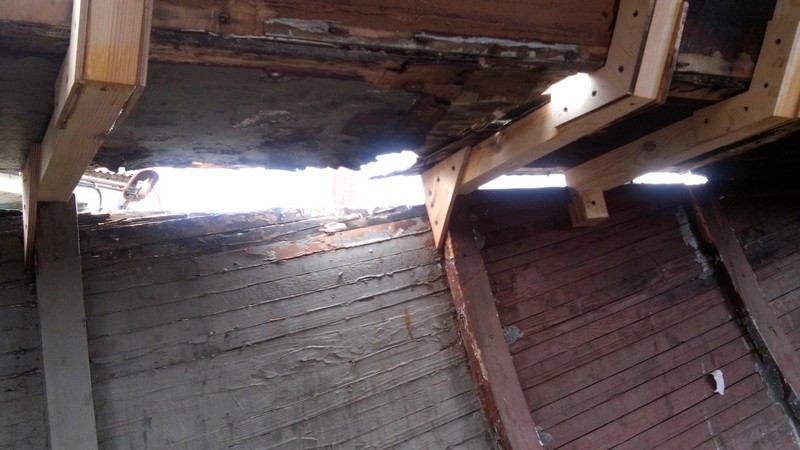 Before tearing off the rotten deck completely, Maxim made a new frame (beams) so that the hull would keep its shape without a deck 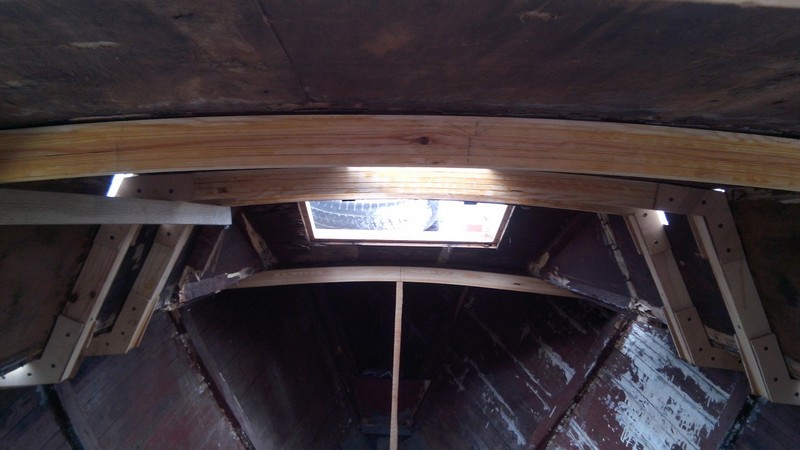 Also, scaffolding was built around the sailboat for protection from bad weather and ease of use. Later, a thick oilcloth was pulled over them in 2 layers. While the summer was going on, there was enough oilcloth, and in the autumn the winds tore it to shreds, I had to look for a denser awning, but I will write about this later. 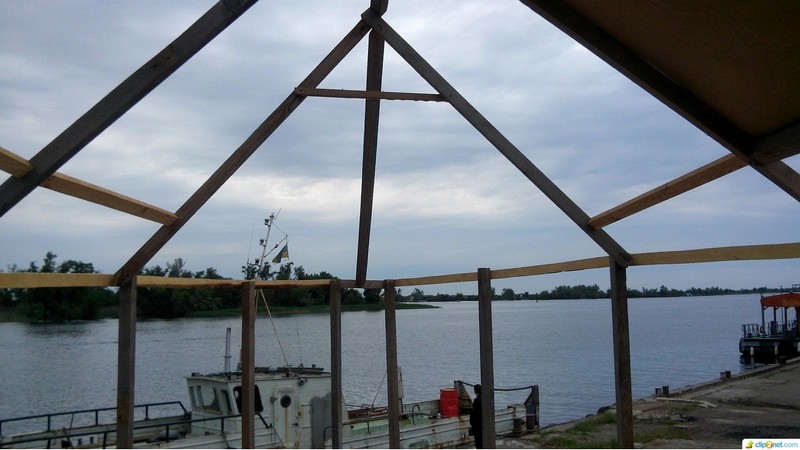 In short, the work has begun. I usually came once a month to see what was happening and part with the next amount of money :)

Starting with this article and in subsequent ones from this column, I will write a list of things that remain to be done on the sailboat. I will categorize them.