The boat has finally been brought to mind and has already been launched. Conducted sea trials of both engines, sails and water tightness.

Video from the descent (sorry that on the side, recently youtube has removed its video editor)

In the last days before the descent, I feverishly completed the little things on the rigging: I put blocks, eyes, shoulder straps, changed ferrous metal fasteners to stainless steel throughout the boat. These days, Maxim practically quit his job on the boat, saying that I pay little money, although I had never heard this from him before. Unfortunately, I didn’t have more money at that time (this must be said in advance, and not at the last moment), so basically I finished it myself. In general, I am glad about this, because Maxim understands the rigging a little less than nothing. Boat hull according to the drawinghe can do it (although, for example, he didn’t make a rudder blade for me, even having a drawing, but then I didn’t force him to redo it). Well, at the expense of the convenience of the location of all sorts of little things (pockets, shelves, panels with toggle switches) in the cabin, this is also not familiar to him. The saddest thing is that he could learn this if he undertook to finish it for little money, I would tell him everything and show him. From Maxim there was a main claim that I ordered a lot of alterations to the hull, but if Maxim had experience in building sailing sailboats, he would have initially discussedabout me the best decisions, instead of sorting them out in practice for my, albeit not so big, money. All in all, I cannot yet recommend him as a good sailboat builder. Putting a teak deck or repairing the hull is possible, he understands this.

Maxim was not interested in making one boat to advertise his company as a sailboat builder (I would turn a blind eye to all the shortcomings and make a good advertisement, since he wants to learn quickly and eventually be able to do everything on sailboats) he wanted money right away, but it’s not happens if you do not know how to make the boat comfortable.

Returning to the launching of the sailboat: for two days in a row I approached the manager of the territory where the boat is standing to call a crane (a crane with a long boom was needed, because the access to the water for the cart with the sailboat was blocked) and they told me what else early, but will order soon. It ended up that one day when I was poking around on the deck, changing fasteners for stainless steel, the crane just drove in and began to prepare for the launch of the sailboat. In general, it is necessary to warn at least an hour in advance about this, in a good way)) I had to very quickly remove the tools from the deck and put lines under the hull, because time atthe crane is not cheap, especially the big one. Maxim came to the launch of the sailboat and nevertheless helped to launch it, for which many thanks to him.

The boat landed exactly on the waterline, but without people on board. It will be necessary in the future to tint with antifouling 3-4 centimeters higher. The leak was checked immediately after the descent - it was not found. The propeller shaft seal worked fine.

Maxim and Sasha (Maxim's employee) and I made a test run under a gasoline engine - everything seemed to be fine. The motor pulled perfectly, the boat turned out to be maneuverable, turning very quickly. It was not possible to check the electric motor, because. I did not have time to install the motor controller (but I checked the electric motor later during the transition and everything turned out better than I expected).

It was time for me to return to my city and I left the boat on the water for 2 weeks. I wrote a list of what needs to be completed (90% of it was what Maxim promised to do a long time ago and it seems that I already paid for it, but his hands did not get to do it). There was such an unpleasant moment that before the start of the sailing of the sailboat, I asked Maxim by phone if he had done everything from the list and he said yes, that's all. And in fact, 70 percent was done. I brought more money than usual, gave it away, but he never completed everything that was on the list, which is a pity. It looks like finishing your workhe doesn’t like it, because I read similar reviews and at the expense of other ordered sailboat constructions, not only from Maxim :)

So, by the beginning of the haul, I did not have enough sheet stoppers and it got out to us sideways on the haul. And it was: the main mainsail, the main staysail, a gasoline engine (as it turned out to be faulty, but the malfunction manifested itself during the transition), an electric motor that I had not yet started, an anchor winch that Sasha did not install correctly (if he had checked how it was spinning, he would I realized that was wrong, but alas).

Also, as it turned out later, two hatches in the cockpit are leaking and this is quite critical.

Another such moment: you can’t make payolas from cabinetry veneer - when wet, it becomes very slippery.

I did not quite correctly wire the boom-sheet chasing, which caused us inconvenience in the transition. Later I corrected this and put a stopper on the jib sheets.

On the photo is a battery for an electric motor (48V amidships, 75Ah): 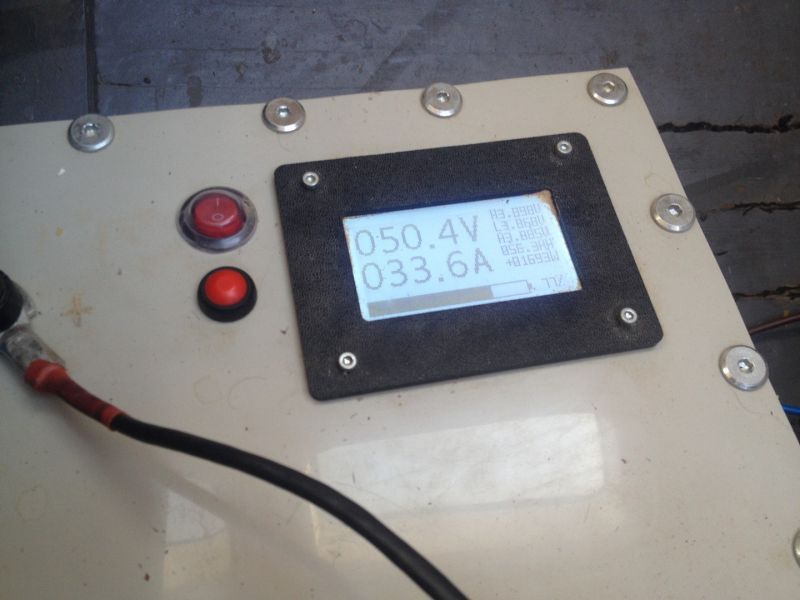