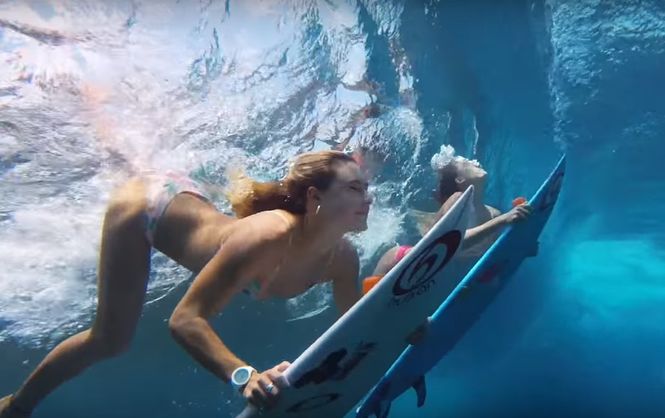 Greetings to all from France from the marina Fécamp . We’ve been standing for 4 days and can’t go to Cherbourg-Octeville in any way - everything is holding up something like the weather, then I won’t change the oil, then we can’t install the GPS navigator in any way (it turned out that the flash card didn’t fit).

I rushed to change the oil, but there was no oil filter, I confused it with diesel (fuel). I ran to the store and oops - an ambush, there is no such filter for Ventus, there is only Volvo Penta ... Well, I think everyone sailed ... But then the Frenchman Benoit came to the rescue ... We got into the car, drove to some store in the backyard and there for 25 Euros they found one and not the original ... Tomorrow I will change the oil and at night with high water we will go to Cherbourg-Octeville ...

These are my things, but I hope this is all temporary ... Then everything will be fine and the weather seems to be recovering ...

Finally, all things were successfully completed and we left Fécamp at 3:00 with low tide, the speed was good, but there was no wind and all night and day we went under diesel.

We walked 80 miles from Fécamp to Cherbourg-Octeville in 16 hours - a bit tired, slept 2 hours at night ... Dolphins came in the morning and circled the sailboat for half an hour.

The wind was weak - it went with all sails and also helped with the engine at 1500 rpm.

We went to Cherbourg-Octeville after 19:00... I went and found a shower, but I needed a code there, which can be found in the captain's office. I rang the bell, a man came out and already seemed to know that I had just arrived, gave me all the codes for the shower and the Internet, said that tomorrow you can pay for everything in the morning ... That's how everything is fine here, the marina is big ... Dofiga guests, True, the ad is hanging - the parking lot is no more than three days ... That's how things are.

Tomorrow the passage of a difficult section from Cherbourg-Octeville to Roscoff . I will leave 1 or 1.5 hours before the high tide, since the exit from the marina takes 1.5 - 2 hours ... To the cape, and only then I will fly to the Guernsey islands over the course, but I will not go in - let's go further - in Roscoff , there, too, the ebbs and flows must be monitored. I have time, so if there is an Internet I will write ... Well, Biscay is just around the corner ... The weather seems to be normal. 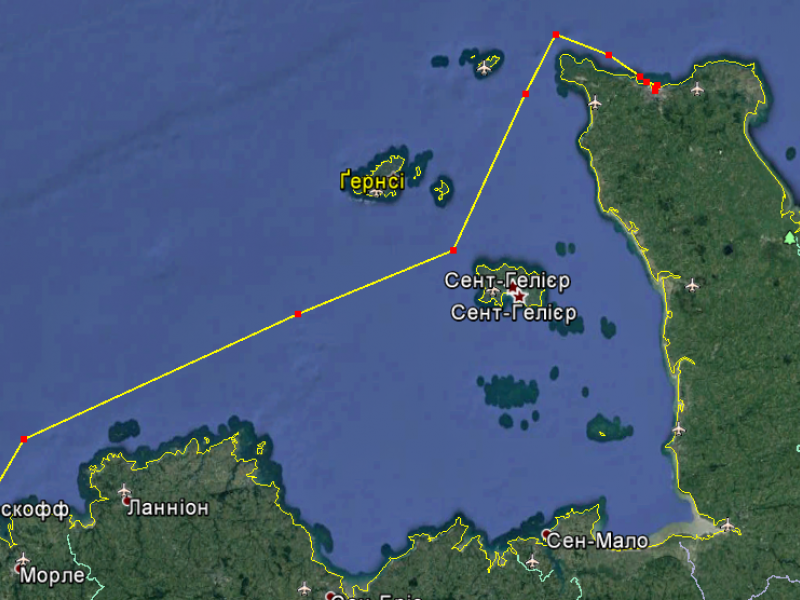 Yesterday we left Cherbourg-Octeville with the top water at 13:15 and overflowed the problem area with the current. They did not stop at the English Isles.

I made a route between the 2nd islands and Guernsey - it seemed to me so shorter. The whole transition was great. But it was cold at night, we put a helmsman car (before that, we didn’t use something, why I don’t know) and walked on it. I liked it, it was possible to hang around a little ... but the traffic of the ships did not really allow it. But everything went well.

Today at 12:00 we came from Cherbourg-Octeville to Roscoff . Walked 22 hours - walked 92 miles. At night, they kept watch for 3 hours: there were no special problems. The only thing that is bad is the cold, I still did not understand how it diverges once from the sailboat; another time with a fishing boat. Well, in principle, he managed - they parted on red lights with a sailboat, and on green lights with a fishing boat. Understood each other, but a little nervous.

Marina in Roscoff is cool, new. Parking costs 14 Euro. We washed, washed and prepared food, and tomorrow morning we will go towards Brest - where we will find a marina - we will fish for 3-4 days crossing the Bay of Biscay. 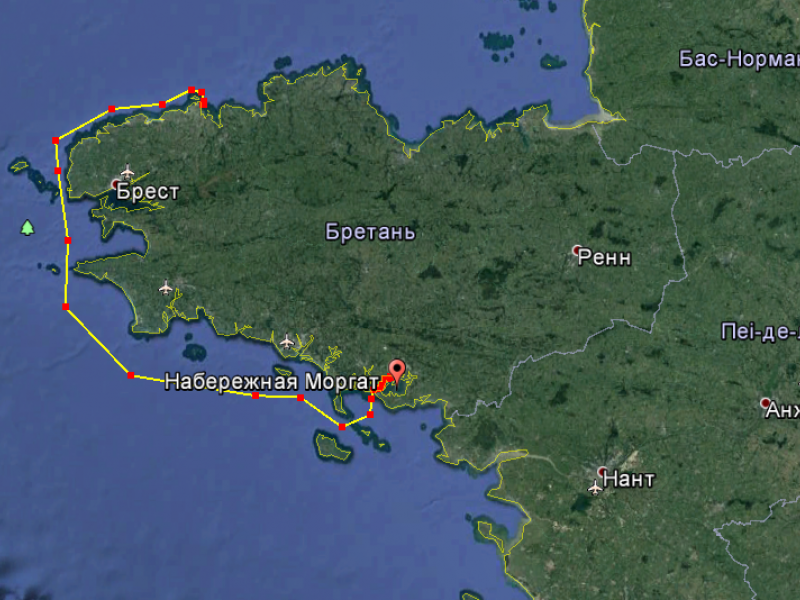 Everything is fine with us, yesterday we came to Morgat . We left Roscoff early in the morning at low tide at about 05:00 and went towards Brest.

At 13-14 o'clock we were at the Porspoder turn. We went on sails, sometimes they helped with the motor, but when turning the course changed and I went only on sails: it turned out about 3-4 hours, we went pretty well. Gusts of wind accelerated the sailboat to 5.8 knots. It was difficult to hold the steering wheel - the muscles of the hands immediately began to get tired. A couple of times it put the sailboat like that - it was scary as it was, but everything worked out - the sailboat taxied out or the gust of wind subsided - I don’t know.

Then we went between the islands along the fairway on sails, but since there was a wind, I removed the staysail, left only the mainsail and went under the motor with the mainsail. Somehow we reached the turn to Brest (there is a lighthouse there), and then the main phase of low tide began. The motor is running, the wind is in the face and the wave: the sailboat slaps its nose. He tried to leave on tacks - he takes him to the sea. In general, we fought the current as best we could, but at 21:00 we came to Morgat , had a bite and went to bed.

Marina is the same. Shower for tokens, you have to buy in the captain. Free only water, electricity and toilet (included in the price of parking). In the morning we got up and went to check in (filled out the arrival form and all the paperwork), we were given a bag with booklets and a map of the city. There is a gas station in the marina on the map 24 hours, but we could not go to the shower because the captain is open from 8, every day, except weekends.

In the evening, we looked at the forecast and decided to go tomorrow to Gijón and not to A Coruña , because according to the forecast on Saturday (on the 3rd day of the trip), the wind is expected to increase just in the center of the Bay of Biscay, in order not to get into it, we think to go a little to the right. These are the considerations.

And so everything is fine: today we walked around the city, slept, ate food, otherwise I don’t feel like eating in the sea ...

Tomorrow morning we will refuel with a solarium. I take with me a tank of 50 l + 100 l in canisters - I hope that will be enough, especially since the first nets or even two wind will be normal and we will sail.

I would like to warn you for the future: there is a gas station in Morgat , but it should be at least 300 or 500 euros on the cards, since it wasn’t enough on mine, she didn’t let me refuel, but doesn’t accept cash, well, my friend helped - she filled up from my card, I gave half to her. In general, we had an agreement with her that for the solarium, food and payment for the marina we pay in half - it was like that all the way. 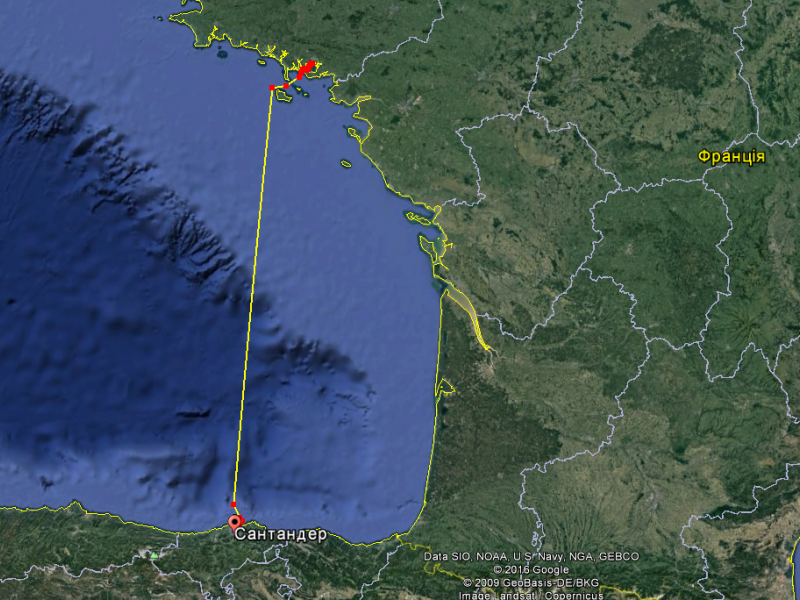 You can congratulate us: today at 10:00 we passed the entire Bay of Biscay together with my girlfriend, having no experience and ability to manage a sailboat. Traveled 280 NM.

Yes, it was not easy. Yes, it was very difficult and the strength was running out, but we did it, no matter what.

The first half of the day was calm, a little wind, the engine was warm.

At night they changed with shifts, but I already asked to sleep 2 times from 12:00 to 3:00 and from 6:00 to 8:00. The whole next day was calm, the echo sounder stopped showing the depth, only squeaked sometimes. I tried to somehow pacify him, but he constantly reminded me that there was a great depth.

We got into a bit of a mess on the 2nd day, but I think there was no more than 25 knots of wind, but huge waves from a 5-storey building will be remembered for a long time.

For the whole second and third days, they hardly ate or drank anything - it turned inside out specifically ... I could only eat oatmeal porridge and a sandwich with green tea in the morning, black didn’t go somehow ...

During the day I tried to eat nuts with apples - it helped a little, but still there was a very strong weakness. One night, when a big wind blew, a friend picked me up and said I couldn’t hold the steering wheel like that anymore. I got up, removed the staysail and went to the grotto - it became easier.

Then my watch and then it began: the wind was more than 25 knots, we still caught a storm. I can’t keep the course - it leads all the time to the left, the boat heels, flops on the wave, the engine is running.

I forgot to turn off the helmsman and as he began to beat with a rod - he sees that my sailboat is not going there. Well, in general, some kind of pipets ... But somehow I calmed him down, turned him off and put him on the floor. The wind began to intensify - let's wake up my friend, stand with our nose into the wind, remove the grotto.

For 5 hours we went on the motor along the wave, did not begin to head for Gijón . The waves in the morning were just huge, but slow, probably from a 5-storey building - they slowly rose, then fell. On such waves we walked the whole third day. The night was calm.

At 00:00 I saw the lights of the earth and was very happy, but it was still 8 hours to go. But it's all the same - the earth was visible. Somehow he kept watch. Losing consciousness, I went to bed and woke up at 3 or 4 - I was already walking myself before entering the Santander marina, but we wanted to go to Gijón at least ...

The weather here is great... Not like in France.

We ate and drank, washed and rested... These are my things, it will be easier further. We can reach Portugal in a week.

Scheduled to change oil and filter tomorrow. Everything is there, bought in advance. There was one incident with the engine: halfway through, it first slowed down, and then stalled ... I thought that the solarium was over - I climbed to look. There were still 10 liters left in the tank, another 20 liters were filled in and the engine was given a break in the drift ... After 15 minutes it started up, everything seemed to be fine from the control box, the water was flowing - that means the cooling and the ampeller were working ... I couldn’t understand what it was. We went further, but at times the speed floated, slightly rising or falling. If you hold 1500 - normal, add up to 1800 - they start to swim. Maybe a fuel filter or something.

I already got a key for a special type of chain - I bought it in advance ... The speed could float due to air leaks and tried to tighten the filter even more, but my gaps between the engine and the bulkheads are very small - in general, I probably twisted it by 1 cm. Further the engine worked normally - helped.

The next day, a Russian sailboat entered the marina - I was lucky and I met the famous in the Russian Federation and the world round-the-world navigator Evgeny Shkaruba and his training team. They came to us in the evening to drink tea and ask how we managed to pass Biscay without a good skipper and sailing practice. We told them our adventures, they shared their experiences with us. In general, these couple of days that we rested in Santander were the happiest days since the beginning of my voyage. Next, we plan to switch to Gijón and A Coruña