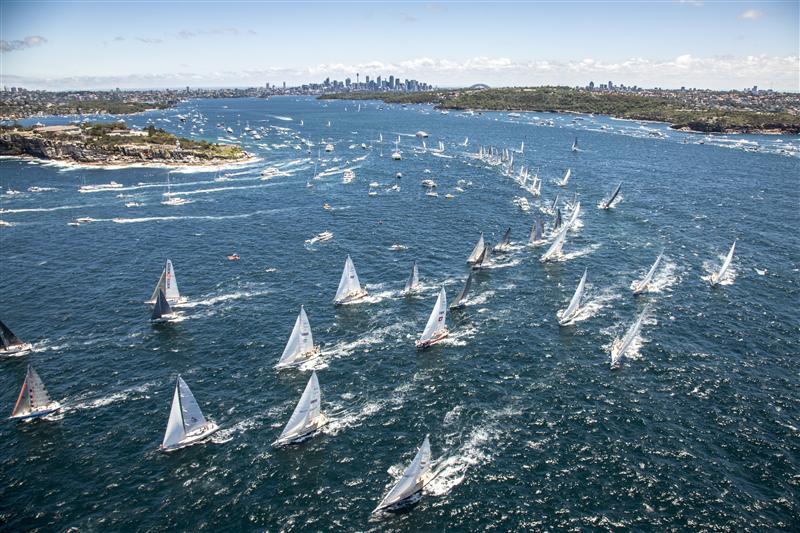 After ten years spent on the forum incognito, nevertheless, one should give him his due, because the time spent here was not in vain. I bought the boat in Germany, the route is Mediterranean. At the end of the first stage, Lübeck - Le Havre, some thoughts appeared, with which I hasten to share on a resource I respect.

To overtake a sailboat from Germany to the Mediterranean is your biggest adventure in life, - somehow between cases, my Darling admitted. It's hard to disagree with her. Although, on the other hand, life is such an amazing thing that once stopping halfway to a dream, there is a high probability of plunging into a swamp and never getting out of it again.

The first stage is completed, almost seven hundred miles remain astern. The transition from Germany (Lübeck) to France (Havre) was much more difficult than I could have imagined. The reason for this is the lack of personal experience and, of course, Russian maybe. However, the sea, and in particular the northern seas, do not forgive mistakes. At some point, I was visited by doubts and even despair. But luck and luck played a role. Moreover, both of these factors had completely physical outlines in the face of the captain and an old acquaintance whom I invited to this transition.

Thinking about the strongest impressions at this stage, I cannot but mention the sea. In all its manifestations. The extraordinary survivability of the design of sailing sailboats, when a person breaks down first. Dutch hospitality and Vlieland. Channels and gateways. Cruel, to say the least, ship traffic in the ports of Kiel, Hamburg, Amsterdam, Rotterdam, Calais, Le Havre.

Of course - the English Channel, where England and France are in direct line of sight. It seems to me that I have read about this so many times, so many times, mentally, with the heroes of the books, I passed the strait. That when it happened in real life, I did not believe what was happening. I was surprised at the lack of bureaucracy when crossing maritime borders on a sailboat in a united Europe. To say more, they simply do not exist. Well, probably, I will note the well-fed, measured life of the local sailboat party. Large boats, people are absolutely in no hurry and enjoy any weather.

Having entered the marina of Port Deauville, we exhaled. There is a crane for removing the mast, gas station, shower, internet. In general, all that gentleman's set that is required for a sailboatsman who has come from the sea. In addition, without expecting it ourselves, we found ourselves in the center of the resort life of Normandy. Deauville is a famous resort in the north of France. A corner adored by the French bohemia and the nobility. It was here that Claude Lilouch filmed his masterpiece for all time, Man and Woman. But sadly, I didn’t have time to see the city. I'll save all the best for later, especially since I'm herereddostoy to return with Beloved. And I hope that the second stage of my journey will be no less interesting than the first. 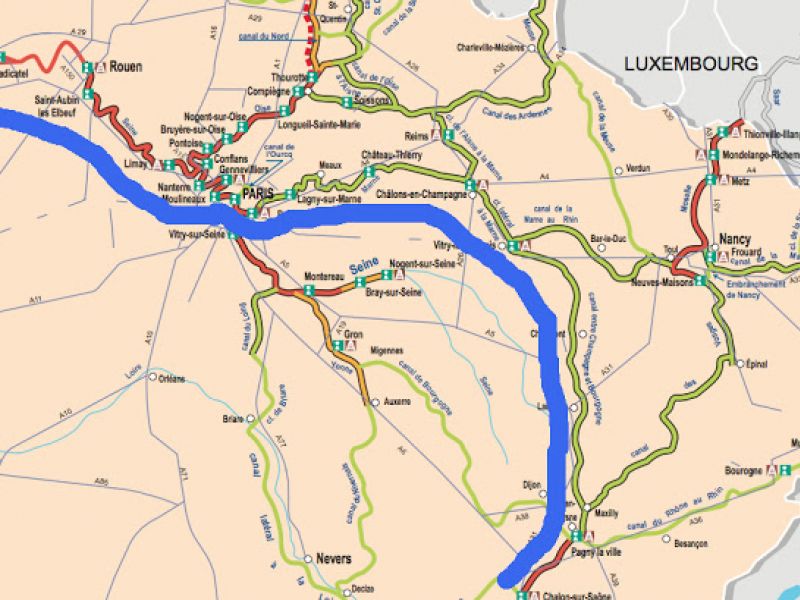 It was not difficult to buy a sailboat in Germany. Another question is how to deliver it to the place of permanent deployment, to the Mediterranean? With a trained crew and a strong boat, the obvious route suggests itself - around Europe, bypassing Gibraltar. Autumn and the lack of a trained team made their own adjustments. And that is why I decided to go along the rivers of France. 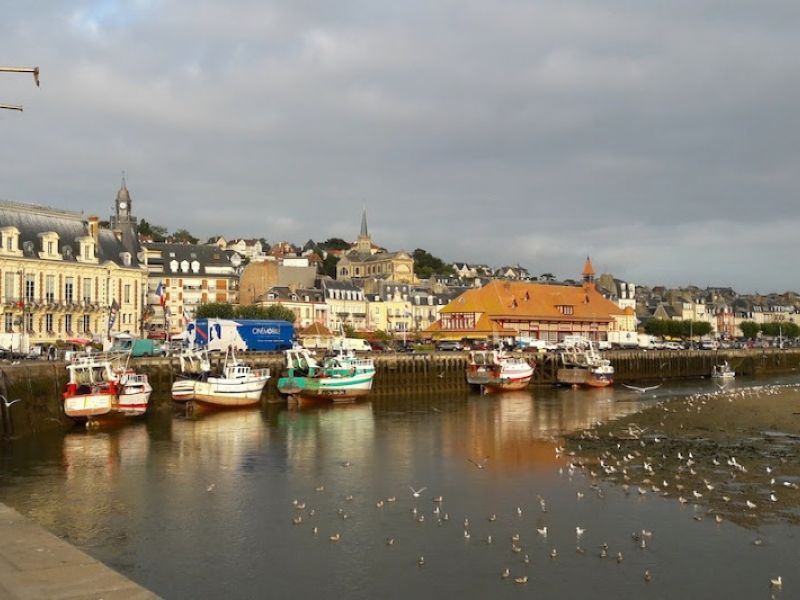 Starting to understand the complex network of French canals, I counted at least three routes that allow a boat with my draft (180 cm) to pass from north to south. In order to combine business with pleasure, I decided to go through Paris. What could be better - to be alone with your beloved, on your own sailboat in the city of love and romance! It seems to me that it was worth being born just for this. But for now - this is all in theory, time will tell how it turns out in practice. 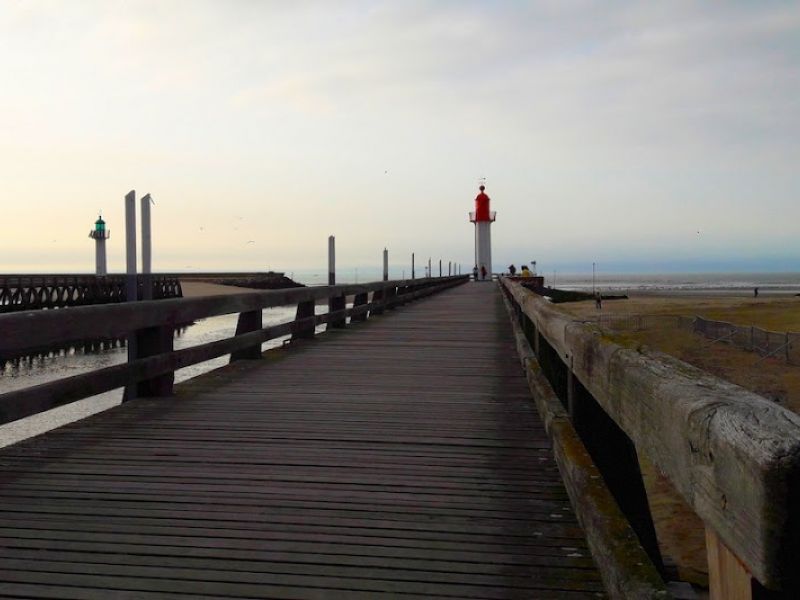 On the fifth of September, Irina and I flew on a boat to Deauville. Now I know that terrible feeling when your sailboat, your property and, in the end, your money, are left unattended for thousands of kilometers. But all is well and the excitement was in vain. We spent two days getting ready, buying groceries, installing a shower on the sailboat and getting to know the city.

A few words about parking. Municipal marina of Port Deauville. The lock and the entry and exit of ships is carried out twice a day, during high water. The tide chart was taken from the Navionics program. For a 9-meter boat I paid 27 euros per day. By the way, parking in Calais cost 11 euros per day. When the boat was put in, in August, life was in full swing in the marina. Crowds of vacationers and onlookers. In September, the movement ended and we were almost the only living inhabitants of it. 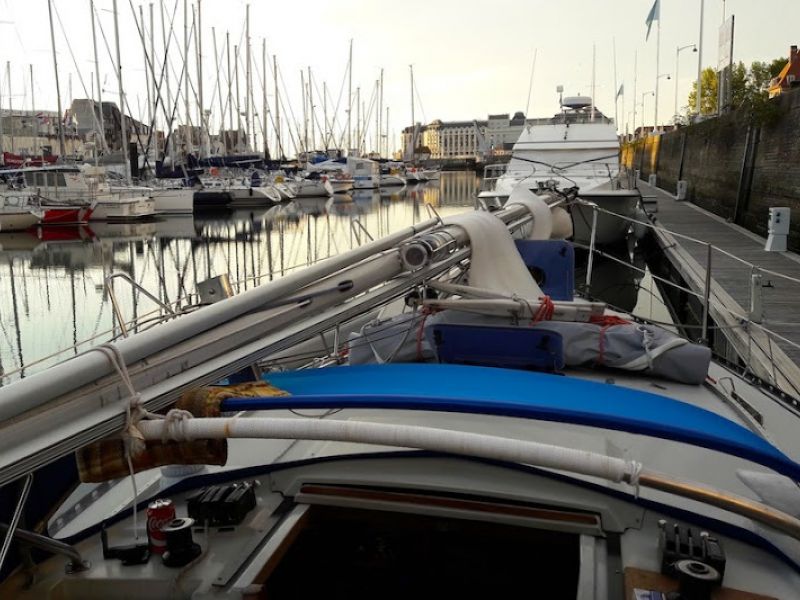 Internet, water and electricity are included in the price. The shower worked for 50 cents even though there is a two euro coin drawn on the coin box. There is no gas station at the municipal marina, but fuel can be purchased at a nearby marina. Refueling machine, releases fuel only by credit card. After her visit, there was an unpleasant aftertaste and extra written-off money that has not been returned so far.

Autumn life in the resort town slowly falls into hibernation. Cafes and restaurants are closing, but there are still many vacationers. Local fishermen are not at all afraid of low tides. In low water, ships stand at the pier on the sand and, as if nothing had happened, unload fresh fish. Right there, from the trays, there is retail trade in fresh catch. 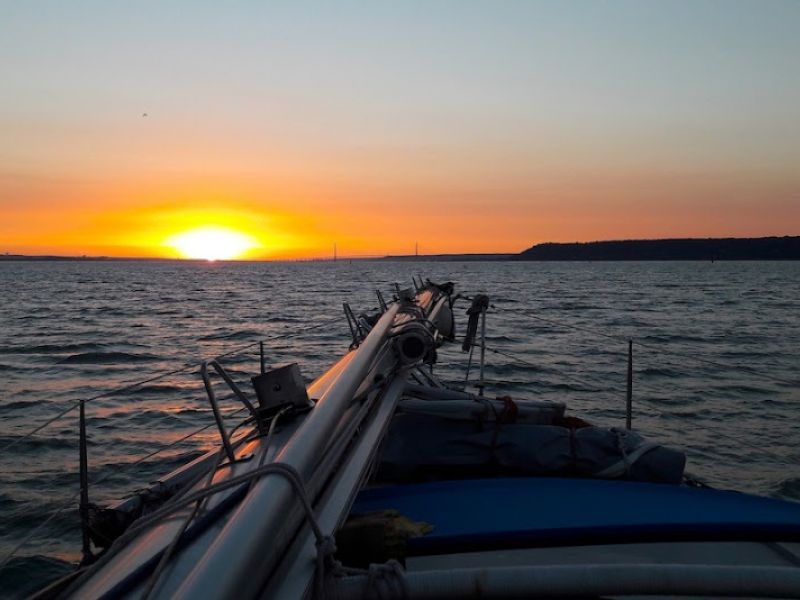 Early in the morning, September 8, we left the marina with the firm intention of entering the Seine. At 8 o'clock the forecast promised increased wind and waves, but it seemed to me that by this time I would already be under the cover of the river banks. No matter how I tried to calculate the place of the future evening parking, I could not decide. There were too many unknowns. There were several suitable places in mind and I decided to navigate already in the place.

As the forecast promised, the wind turned on at exactly eight. Later, waves came from the sea, but they, like the wind, were fair and only brought some variety. The sailboat glided perfectly on the waves, and my beloved got acquainted with the pitching. It is worth giving her credit, she steadfastly endured the life of a sailboat and coped with the kitchen even on a big wave. Still, it was her first experience. 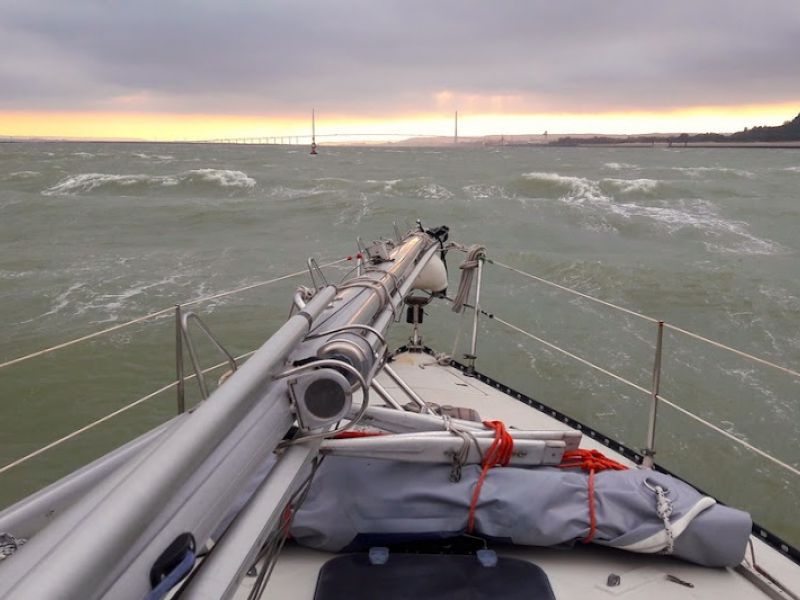 The flow of the river and the ebb tide gave me only one and a half, two knots of speed, and the height of the wave at the mouth reached two meters. I would never have thought that she could go so deep into the interior of the continent. The pitching ended only when we passed the first river turn, which is about 18 miles from the seashore. By that time, the direction of the current had changed and the Seine flowed back. An amusing spectacle I tell you, and a pleasant one, damn it! All the way to Rouen, my boat gave out up to 8 knots of speed at 2000 rpm.

All the way to Rouen, the depth of the Seine fairway was kept at around 10-18 meters. Huge sea vessels came across on opposite courses, but it was not difficult to diverge from them. The river bed is wide and somehow reminded me of my native Volga. The only difference is that every meter of the Seine is equipped. In cities and towns, these are obligatory concrete embankments, outside of them, the banks are artificially deepened and filled with boulders. The echo sounder almost always showed at least 8-9 meters under the very shore. 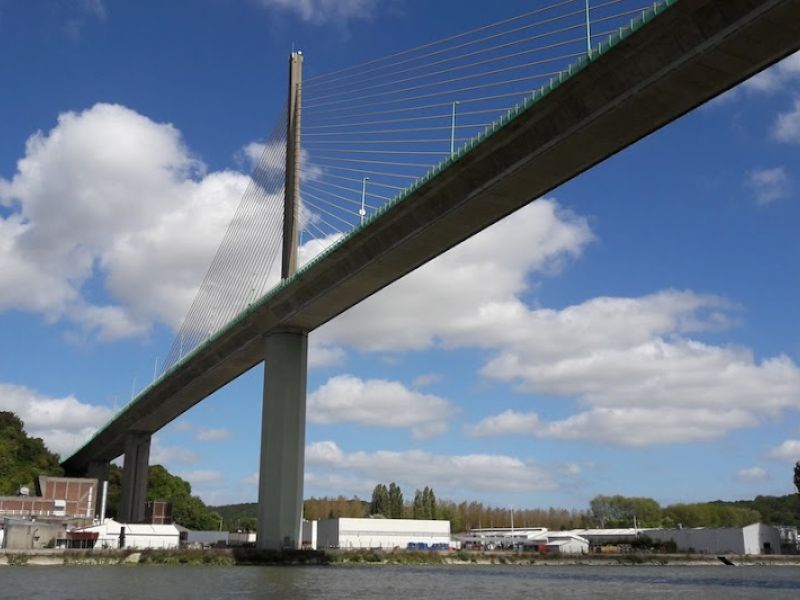 The explanation for this is the huge river port of Rouen, capable of receiving ocean-going ships. I was not even surprised by the very fact of the presence of large ships in the depths of the mainland, I can assume that this is also possible in Russia. And the fact that the secondary port is not weakly loaded with work. Comparisons, far from being in our favor, are inspired by childhood memories of endless caravans of ships going along the Volga. And it is very painful to look at what is happening now with the domestic river fleet.

We covered 80 miles in one day. I liked Marina Rouana more than in Deauville. New, furnished. Light, water, internet, shower, and even laundry, everything is included in the price. The cost of parking for 9 meters is 15 euros per day. Knowing this in advance, it was possible to go here with the mast and already here to start laying it on the deck. Faucet available. The depth in the marina does not fall below 4.5 meters. There is a gas station, but again, an automatic one. 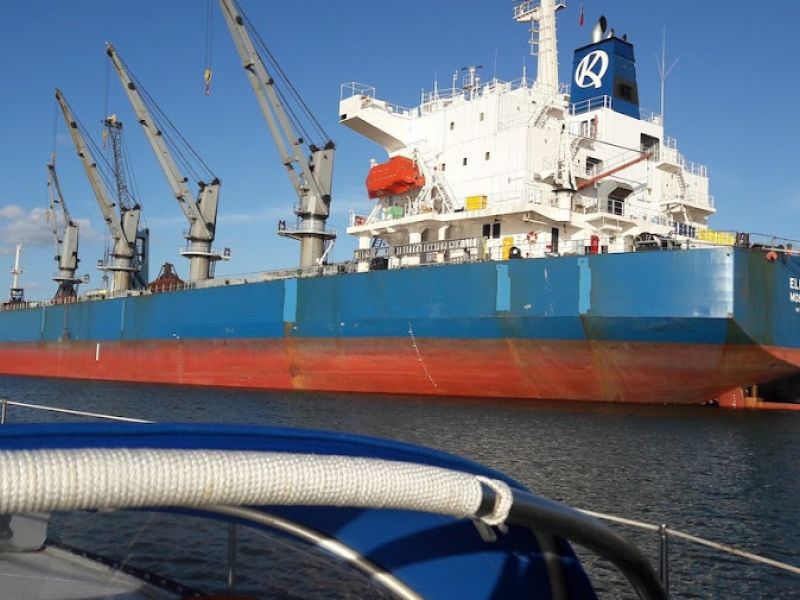 Remembering the previous unsuccessful experience of communicating with French automatic gas stations, I decided to play it safe and threw exactly thirty liters of money onto one of my cards. But he failed. Fuel is released only if there is at least 200 euros on the account. Diesel by the way here costs 1.4 euros. I left the idea with refueling for another time, since there is a decent supply of diesel on board.

There is a huge shopping center nearby, but it turned out to be useless for us. I had to walk into the city for groceries. We can say that today was a rest day. Although there was no time to rest: laundry, cleaning, shops. We walked around the city for a bit. Tomorrow morning they planned an exit. 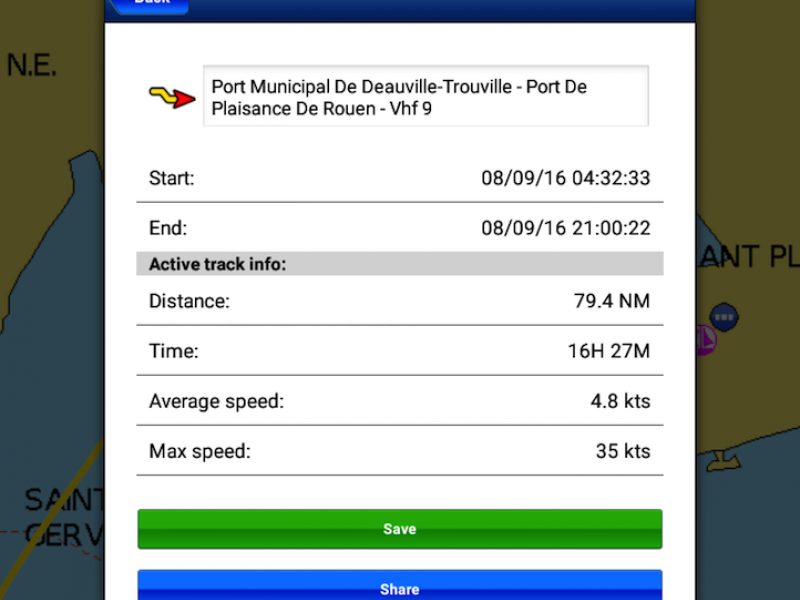