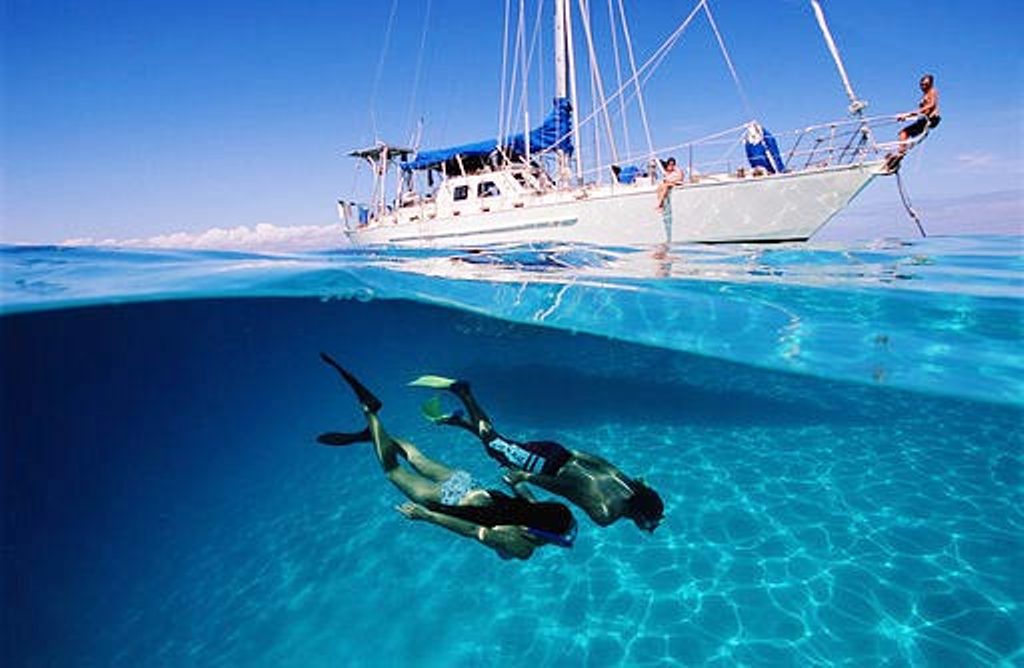 At first, a crew of three was planned. My old friend Sergey was supposed to be the cabin boy. He has no sailboating experience, but he had a desire. Thanks to his efforts, the Kyivstroypolis insurance company, whose director turned out to be not indifferent to the marine theme, purchased a Mercury Power Sail F4 outboard engine for my sailboat. For which I am very grateful to them, since this engine has repeatedly rescued us in difficult times, and without it, all our long-distance voyages would simply have remained unfulfilled. Sergey, unlike us, is fluent in English.kim. Alas, his wife stood in his way as an insurmountable obstacle. Someone popularly explained to her that we are adventurers and we have almost no chance of returning alive. So there are two of us left. Starpom Yura - 2nd class helmsman. Yachting experience for four years as a first mate on the "Chunga-Changa". Before that, he had nothing to do with sailing sailboats, but he is a passionate tourist. Mountains, swamps, river rapids, etc. A very hardy wanderer and an amazing optimist. Well, the captain, he is the owner, i.e. I am a 1st class helmsman, CCM. In sailing since 1975. But this is racing experience on dinghies and sailboards. Before "Chunga-Changi" on cruisers, I only rode under the bank as a competent passenger. Those. experience, at least with respect to long-distance transitions, is also my first.

According to the vacation schedule, we could start on June 30th. Two weeks before, the preliminary weather forecast promised that in the territory from Istanbul to Kyiv the whole of July there would be an anticyclone with winds of 2-5 m/s and direction from northwest to northeast. Based on this, a preliminary route was sketched. The first stage Energodar-Ochakov-Varna-Igneada. The entry to Varna (or Balchik) was planned for the reason that due to the small size of the sailboat and compromising racing and cruising solutions, we have too little water and gasoline (only 30 liters each). Planirov in Igneadelk to issue visas and transit log and continue to walk along the coast in daytime crossings. First to Istanbul, there to look at the islands of the Sea of Marmara, and then along the northern coast to reach Sinop. Close the transit log there, go to Sevastopol and then cabotage home. Tentatively, the Energodar-Igneada and Sinop-Energodar stages were supposed to take 10 days each. Thus, we should have had 10-12 days left to "walk around Turkey". But in practice, everything turned out as always ;) . First, on June 25, a cyclone came with strong southwest winds, rainthunderstorms. Secondly, due to a number of reasons, there was a delay in obtaining permits. So we started only on July 1st. So, by six in the morning we arrived at the sailboat club. Pouring rain. If, under such conditions, you take things out of the car and load them into the boat, and even open the dropper for loading, then from the first day everything will be wet and it will not be possible to dry things, because. According to the forecast, this weather will last until 9-10. So we sat in the boathouse and waited. The rain ended only by noon. We quickly plunged

Initially, the main desire for this season was to go to Odessa for the "Black Sea Ports Cup", and from there "walk" to Varna, spending about 3 weeks on it. But colleagues in the sailboat club dissuaded me from this venture. Main arguments: - do not confuse triangular racing with a cruise. Decide what you want more, and prepare both the boat and the crew for this; Odessa, of course, she is a mother, but not for everyone - it will be much more difficult to arrange a departure from Odessa than from Ochakov. Even many Odessans, wishing to go abroad, go back to Ochakov and from there start to distantcountries - in addition, since Sergey dropped out of the team, and Yura and I almost completely coincided with vacations, we had five weeks at our disposal. There was a good reason to extend the trip to the shores of Turkey :)

They took "on the road" and gave mooring lines 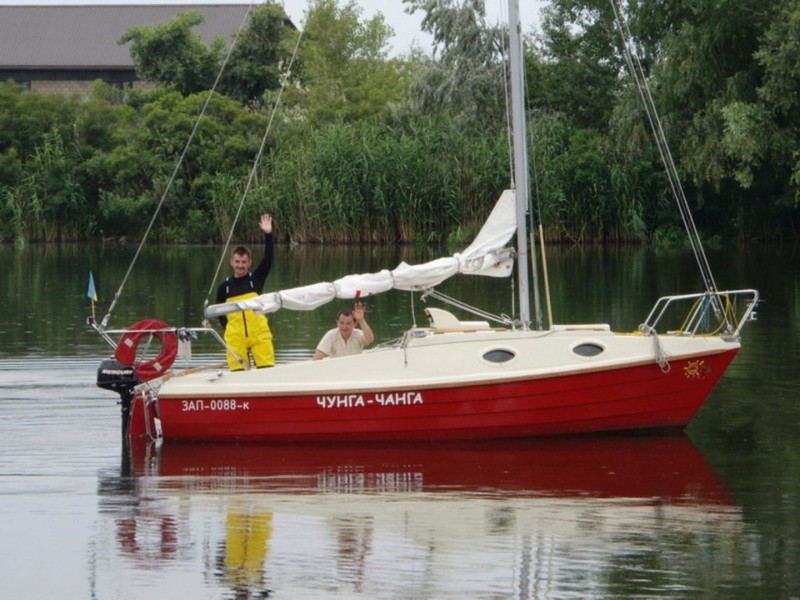 The original plans were to reach Ochakov in four days only by daytime crossings. But from the first day it became clear that the plans would have to be changed and the weather would dictate them. By evening the rain had stopped, and with it the wind. At sunset, the sun even peeped through. Yura decided, if possible, to photograph all the sunsets of our trip. The first sunset is the Kakhovskoye reservoir, the area of Cape Babino. 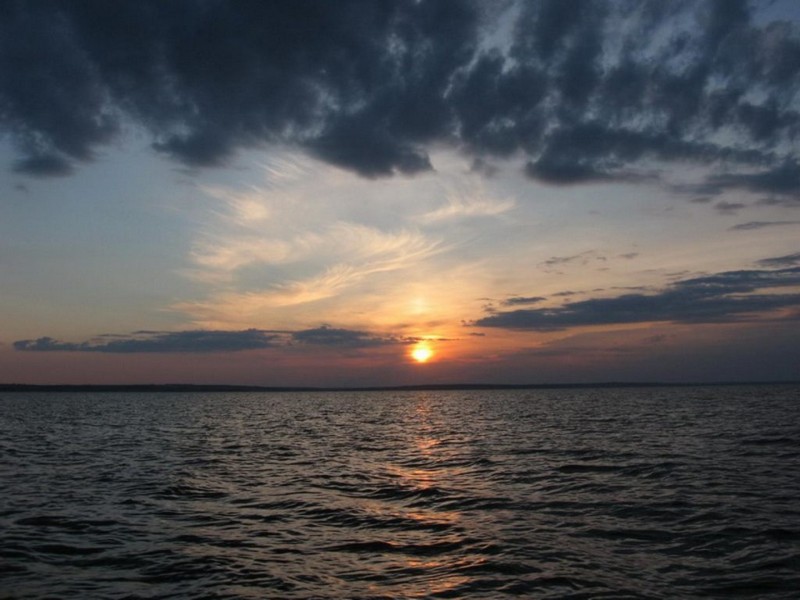 We decided not to stop for the night, started the engine and drove on. The night passed quietly, without incident. By 9 am on the second day, we approached the Kakhovka lock. We don’t have a walkie-talkie, so I called the duty officer from a mobile phone. The magic phrase: "Payment in cash" and the gates of the gateway swung open. Half an hour later we are downstairs. A modern sailboat marina has been built half a mile from the dam in Novaya Kakhovka. 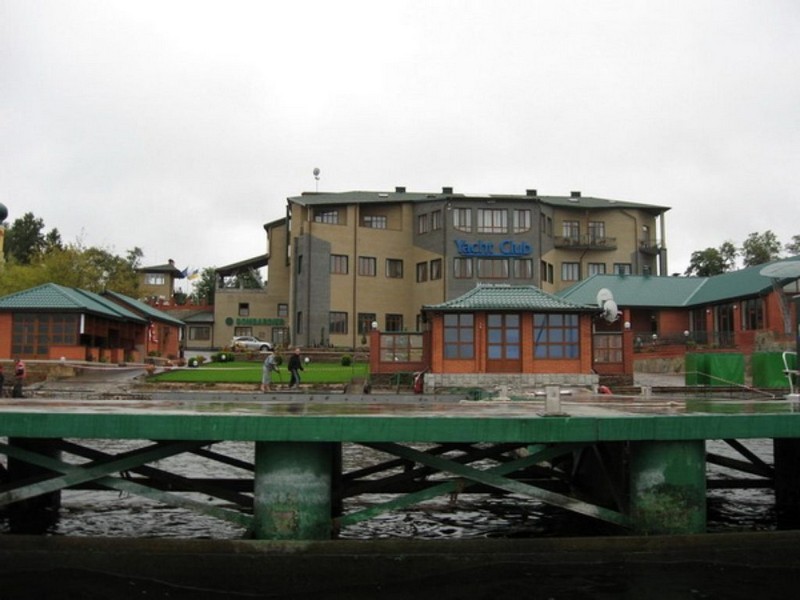 The most remarkable thing is that there is a gas station from the water. She has berths, both for guests - inside the marina, and outside - for transit workers. Very comfortably. The hose goes straight into the tank. 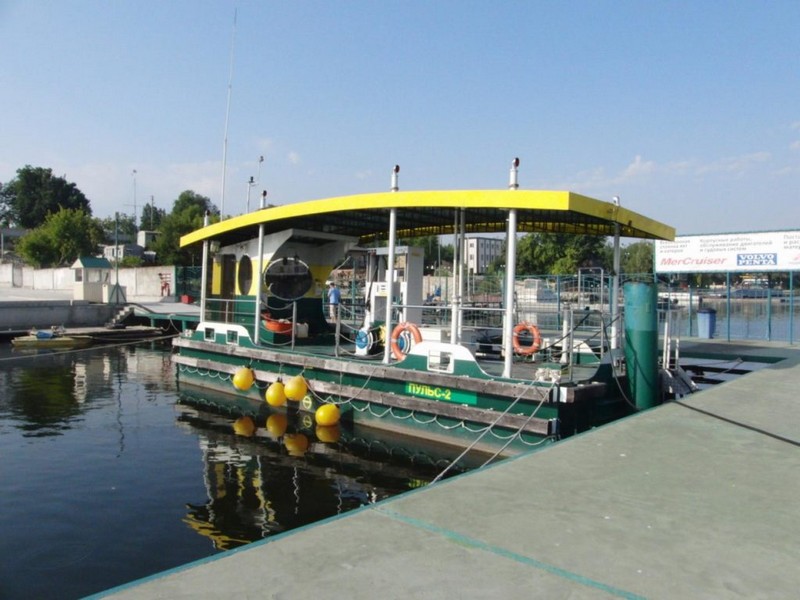 Gasoline is only slightly more expensive than gas stations. We didn't have any complaints about quality. To Kherson we went under the motor with a light headwind. It rained intermittently all the way. At 17:00 we moored in Kherson on the Ushakov embankment. This is the GDP limit. Next, you need to arrange cabotage. To the border guards 10 minutes walk, registration is also 10 minutes. It took half an hour. But that was enough to get me into minor trouble. There are many sailboats on the embankment, everyone is moored side by side, so we did the same. Didn't think about our sizes. We stand at the mooring, there is no rain, brandrshit is removed, the cap is open. I went to the outpost, Yura is sitting on the parapet near the boat. Meters in 10 "steeply flew" jet ski. Large sailboats were also thrown against the wall, but we got the most. First, the brass aft semi-cluster unbent. Secondly, the breaking wave somehow cunningly formed with a straight line, flew up and fell on the sailboat from above. As a result, there are several buckets of water in the boat. And everything that could get wet - of course, got wet. Here the Kherson assolka "Cameo" came up. Throws an anchor from the stern, bow to the wall. We got talking. They have already been taughtsome experience. Now I know too - to moor on the embankment with our size - only with the help of an anchor. No lag.

At 18-20 we left the embankment and descended into the marshes. In a cozy channel, not far from the turn to the Rvach branch, we anchored. We were given three days to cross, there was nowhere to hurry. You can sleep. 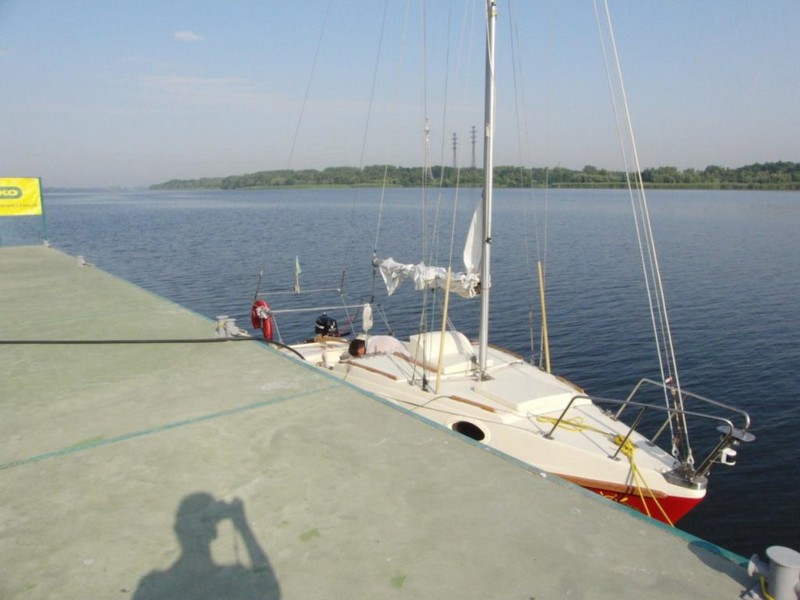 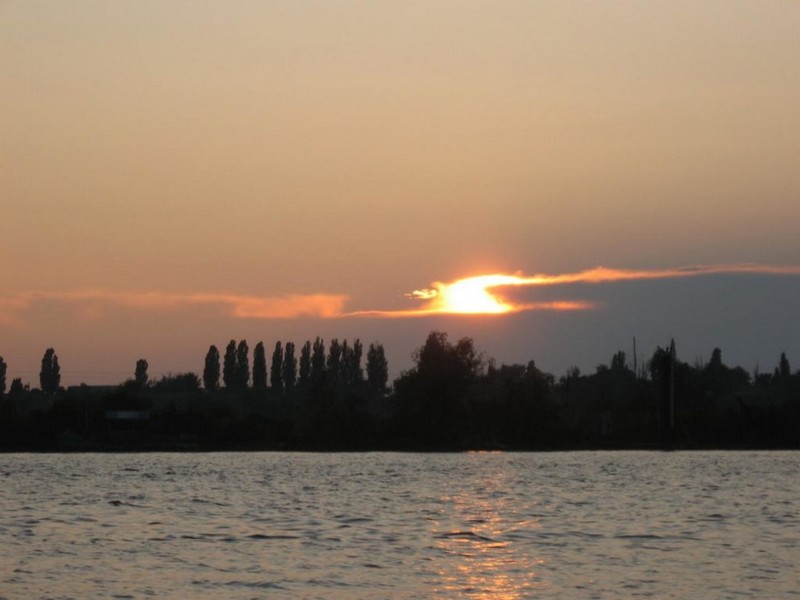 The morning of the third day began bleakly. Fog, drizzling rain and complete calm. Then I decided to go to the estuary in a non-traditional way, i.e. sleeve Rvach, and along the Old Dnieper and Konka. In my native sailboat club I was already condemned for this, but I did not see any serious dangers for myself. It was calm, we were under the engine, there was an echo sounder and a detailed map of the area on board, and a boat, which I can push out of any small place with my own hands without much effort. Who knows if such an opportunity will ever occur again? And I knew that at the mouth of the Konka there is a uniqueruzhenie, which I really wanted to see.

-- Quote -- The Adzhigol Lighthouse is a unique structure built in 1911 according to the design of the engineer and scientist V. Shukhov. In recent years, a lot has been said about "engineer Shukhov's hyperboloids" - apparently, because humanity has finally grown up to these technologies and "Shukhov's towers" in other countries are growing one after another. In defense of the surviving samples in Russia, Norman Foster himself spoke out. And just to replace "hi-tech" comes "bio-tech". During his lifetime, Shukhov managed to build about two hundred towers in the USSR, of which only a couple of dozen survived. most oflocal - the Moscow radio tower on Shabolovka, towers in Nizhny Novgorod and Krasnodar are known to many. But the most original work of Vladimir Shukhov is located near Kherson, at the very mouth of the Dnieper ... The lighthouse is located on an artificial island near Cape Adzhigol on the Dnieper estuary. The height of the lighthouse is 75 meters, the diameter is from 16 meters at the bottom to 6 meters at the top. It is a vertical mesh metal structure made in the form of a one-sheeted hyperboloid of revolution. The openwork lattice of the lighthouse seems to be suspended from it - but in factIt is she, and not a metal pole, that holds the structure. This is the uniqueness of hyperboloid towers - they are strong primarily due to their shape, therefore they are much lighter than conventional mesh structures. Shukhov was led to the idea of a hyperboloid by an ordinary wicker basket, and, in general, it was the most bio-tech of the early twentieth century. In the middle of the openwork-metal structure there is a building, within the walls of which there is a room for shift workers, a galley, an engine room, fuel tanks and a radio center. In the center of the building- a high pipe with a diameter of 2 m, in which there is a spiral staircase and a lift (for climbing to two viewing platforms). They have spotlights. It is the tallest traditional lighthouse in Ukraine and the 16th tallest in the world. -- End quote --

By the time we reached the confluence of the Dnieper and Konka, the rain had stopped, the fog had almost dissipated. The distance between the islands of Bakaisky and Sokolin is about a kilometer, but most of it is shallow with depths of 0.5-1 m, overgrown with grass, in calm it is very clearly visible. The passage where you can squeeze through is very narrow, but deep. You have to go close to Sokolin Island. At a distance of 2-3 m from the wall of reeds, the depth is 6-7 m. As soon as you move 20 meters away, the depth drops sharply. In general, you can go there on a keel sailboat, you just need to know the way. When from behind the island appearedAyak, it turned out that he was still very far away. You can get closer to it only on a small rowing boat - there are thickets of grass all around. But still, the design is visible to the naked eye, and thanks to the "zoom" - generally good :) 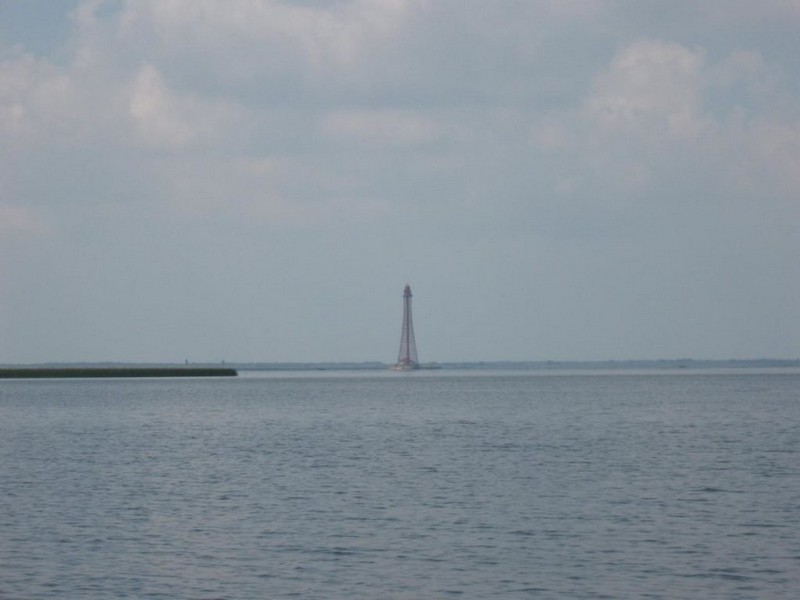 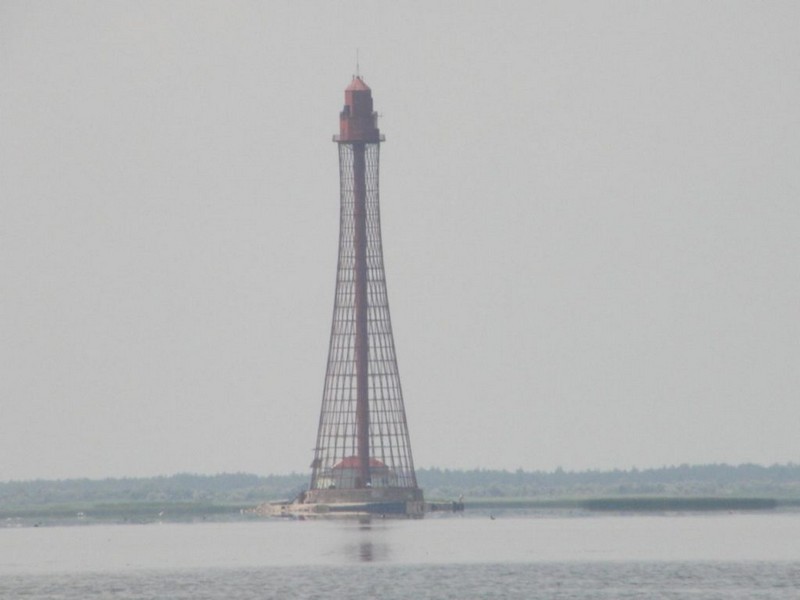