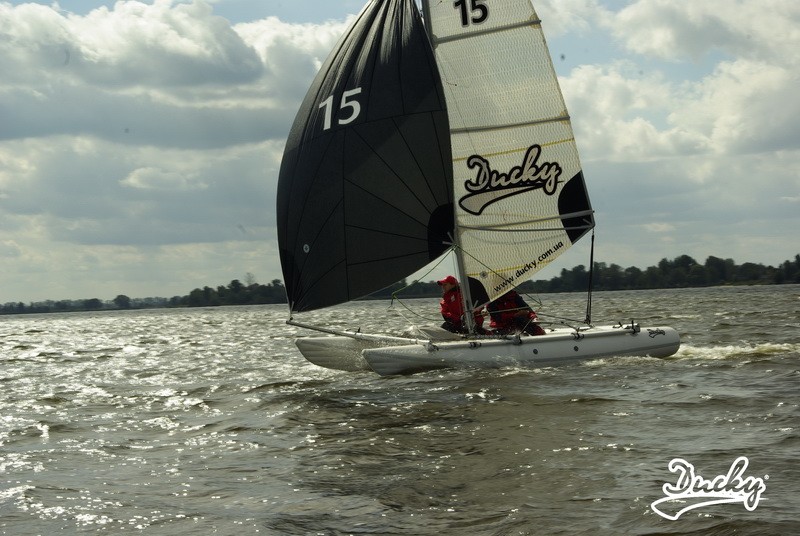 I want to share my successes. I was very worried about this voyage, because on the Dnieper, few people have a stationary and the only electric propulsion on board, and no one could tell me how it would behave in a multi-day voyage.

Before the transition itself, I made a small test exit on an electric motor (34 km).

During the test exit, we spent the night on the embankment in the town of Golaya Pristan And the second overnight stay on the embankment of Kherson itself

We walked slowly under the engine, checked everything, looked around. The embankments are beautiful, I liked it.

During the test exit, the battery of the engine was discharged by 2/3 - an outlet was not found on both embankments. I had 18 liters of petrol with me. 10 liters in a canister, 2.5 liters in the generator tank and 5.5 liters in various plastic containers (looking ahead, I’ll write that the 10-liter canister remained untouched until the end of the voyage).

So, the days off from work are taken: I have 5 days for everything about everything to reach Zaporozhye.

I took a solid set of tools with me - just in case.

Team : your obedient servant, Roma - my old friend (the first officer and the one who always wakes up no later than 5 am) and his eldest son - Svyatoslav (our cook). Here they are in the video: At 7 o'clock they started the generator (I remind you the battery was almost empty) and walked with the generator under the electric motor. If someone is interested in details on energy consumption, speed under the motor, etc. - write questions, I will answer.

After about an hour of operation of the generator, it stopped - they looked at what was the matter - there was little oil in the engine (four-stroke engine). Topped up with oil and fired up. my generator is not standard, but self-made, it produces a constant voltage that is suitable for charging the battery without additional chargers. I just wanted to simplify the design as much as possible, less electronics, less energy conversion - as a result, more efficiency and reliability. We ran out of fuel in the generator tank (2.5 l), we didn’t start it again that day.

According to the forecast, a storm was approaching us, which was in Odessa the day before, by the link you can see how much fun they had: This storm, but already weaker, was coming towards us and was supposed to cover us that night. We walked about 70 km, used 2.5 liters of gasoline in the generator.

The storm started at about 3 am.

This is what windy.com showed at 8 o'clock in the morning: The boat was anchored here :

Photo of a windbreaker at anchor: The storm was not strong - yes, the wind was good, the boat was spinning, because. the current and the wind were in different directions. But overall, nothing special. Anchor and anchor line survived.

The wind was still blowing great and under the storm staysail the boat ran fast.

Under the lock itself, we got into the wind shadow of the coast and measured how much minimum energy is needed to go 1 km / h. It turned out - 70 watts. They ran aground near the pier, but quickly pulled out. Passed 18 km, the generator did not start. We recharged from the outlet on the pier, jibeed for a couple of hours and for the first time we put a spinnaker on this boat:

We spent the night here, in the bay: We traveled about 100 km that day, worked out 2.5 liters of gasoline in the generator in the evening, at anchor. at 8 o'clock we put the mainsail, turn off the engine. We came to the city of Energodar, to the local sailboat club at about 16:00 in the afternoon: This berth was made by Uncle Tolya, everyone in the sailboat club knows him Here we were joined by two more team members: Denis and my soulmate Oksana. There are already 5 of us on board. Passed 70 km, burned 3 liters of gasoline in the generator. In the evening in Energodar charged from the outlet to full charge. We left late, around 10 am. Not a particularly remarkable day - we reached Zaporozhye without any problems. We hooked on algae a little on the shallows - but sharp maneuvers in reverse helped to throw off the algae.

The moment of entering the 7th berth in Zaporozhye (at the moment the boat is standing here): Passed 70 km, the generator was not started.

The trip is over, thank you all for taking the time to read)

PS For the month that I've been standing here, I haven't spent a single liter of fuel. I go out every weekend on the water, ride people. On weekdays, the boat is charged from the solar panel - this is basically enough. From the outlet here it was charged 3 times for 3-4 hours. This is exactly what I was counting on when designing an electric propulsion on my boat. The goal has been reached. Next year I plan to go to sea, I will write about it.

A full 10l canister is still in the boat - I wonder if it will be enough for the return voyage to Kherson. I'm planning in October.