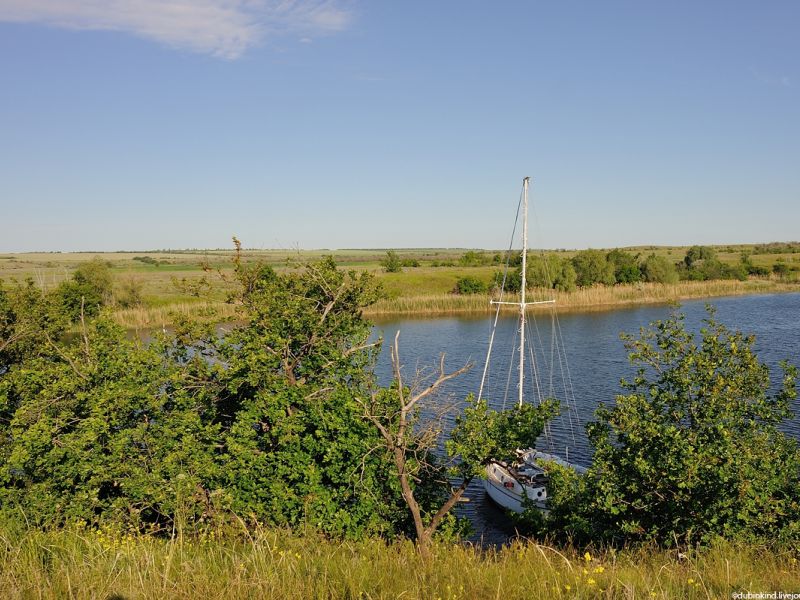 We left Akhmat at 6:30 in the morning, the weather was good, the rain had stopped. 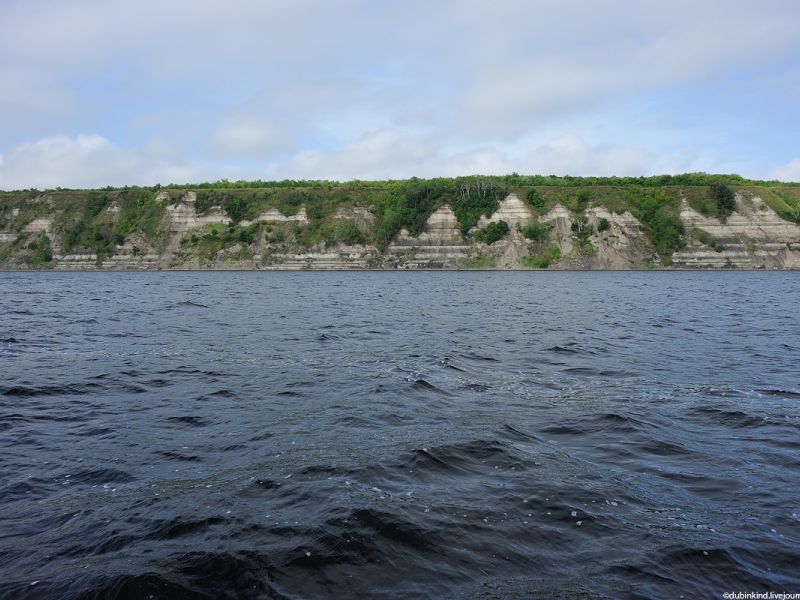 Beautiful shores pass by. Sometimes we spin the staysail, and it adds 1.5 - 2 km/h to us. What do you think is not enough? With our 10-hour daily passage at an average speed of 10 km/h, this is an extra 20 km of travel, which is very good. Yes, we have a completely different scale, it’s not for you to drive to the sea in a passenger car on the weekend))) 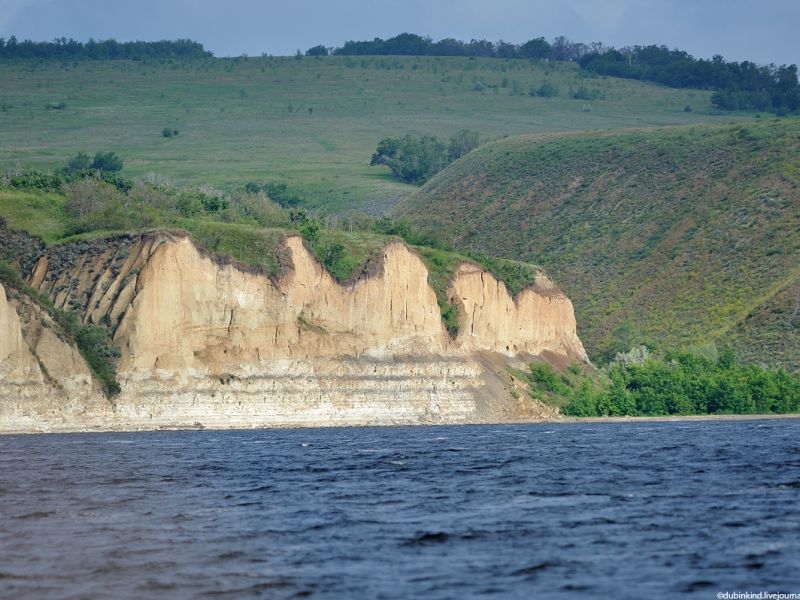 Everything is so calm that I start to doze at the helm. I open my eyes and see a "table mountain", what is South Africa already? No, it seemed 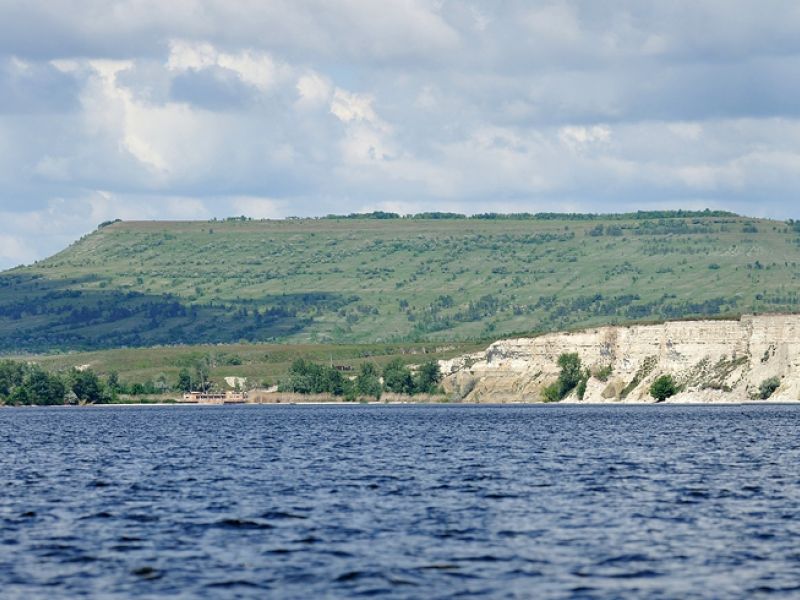 There are almost no traces of human activity on the shores, rarely, rarely, some ruin will flash 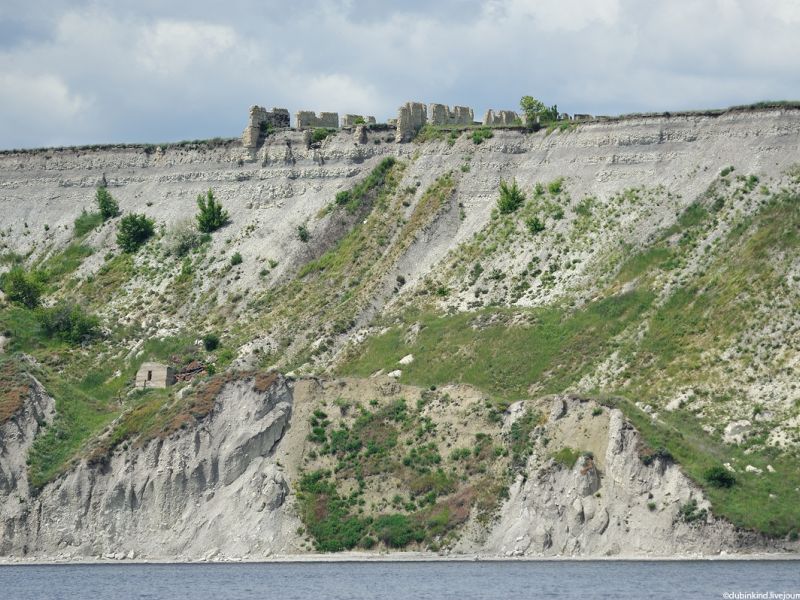 And all of a sudden there's a convention. Tents, cars, flags and even a couple of small boats... Maybe it seemed to me again?) 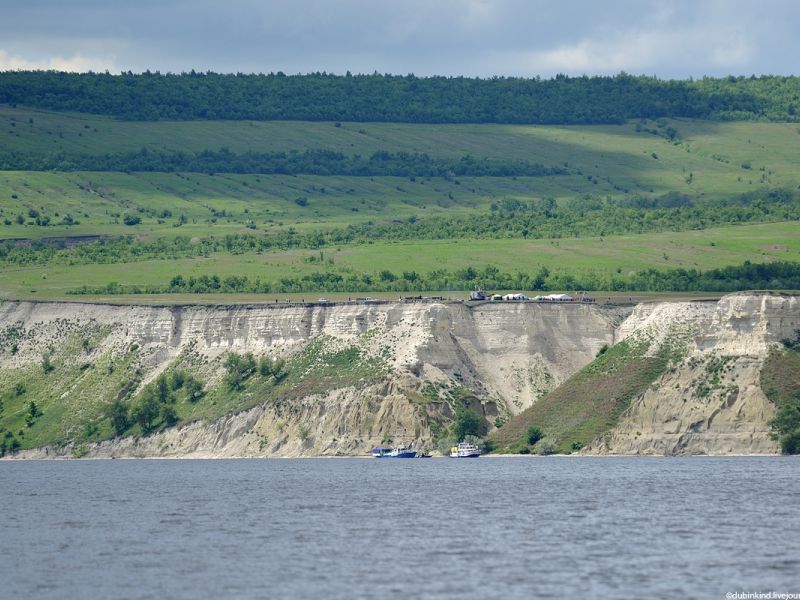 And these columns of natural origin, probably someday, they will fade into real pillars! And just below you can see a slice of a waffle cake. Katya always imagines something in these screes: either halva, or some kind of cake. Apparently, we have a rare case of mass hallucination. I wonder what Fenya sees on the shore?))) 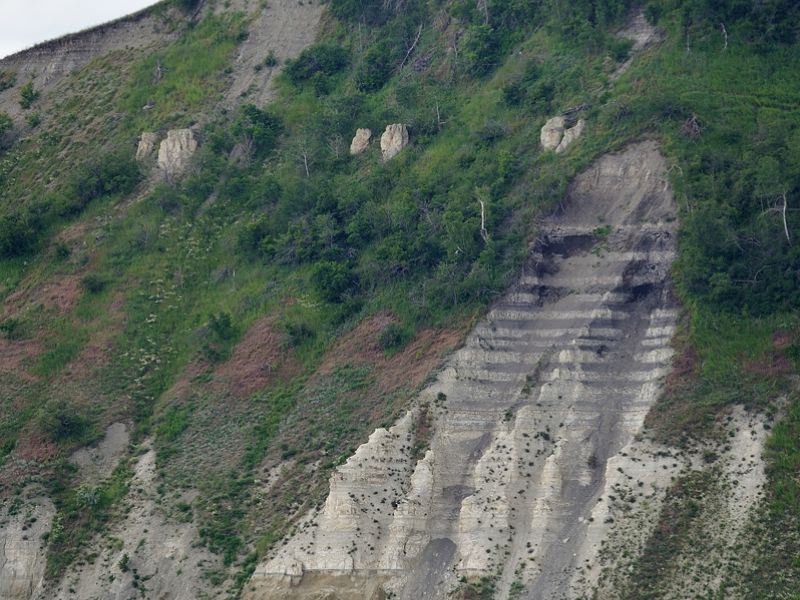 Sometimes the clouds crawl past. But I'm even glad for them - when they come to the winding Volga from the direction we need, a breeze blows from under them. Then we disband the staysail. 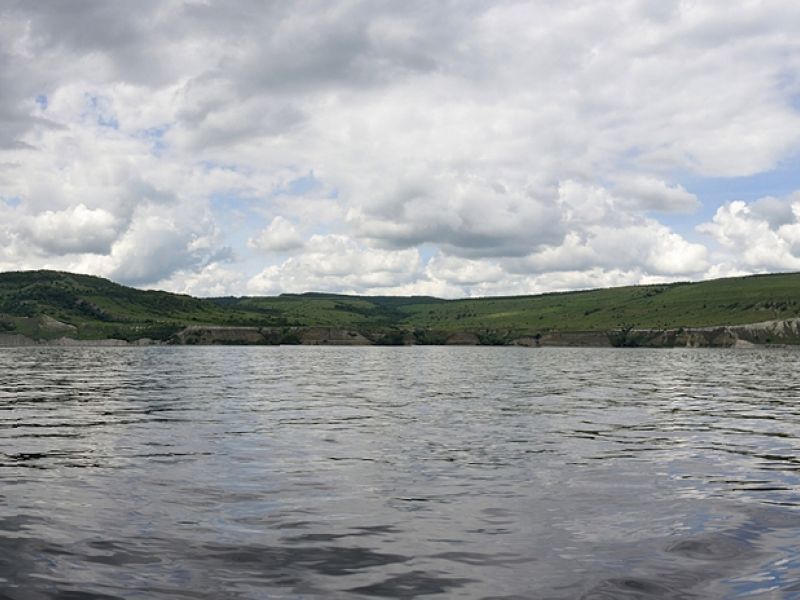 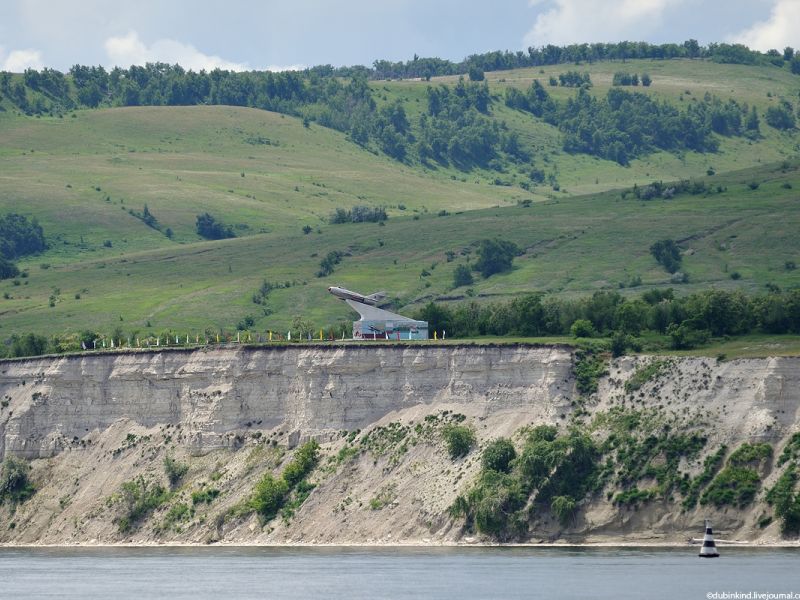 Behind the monument cows graze peacefully

I practice shooting panoramas on the go 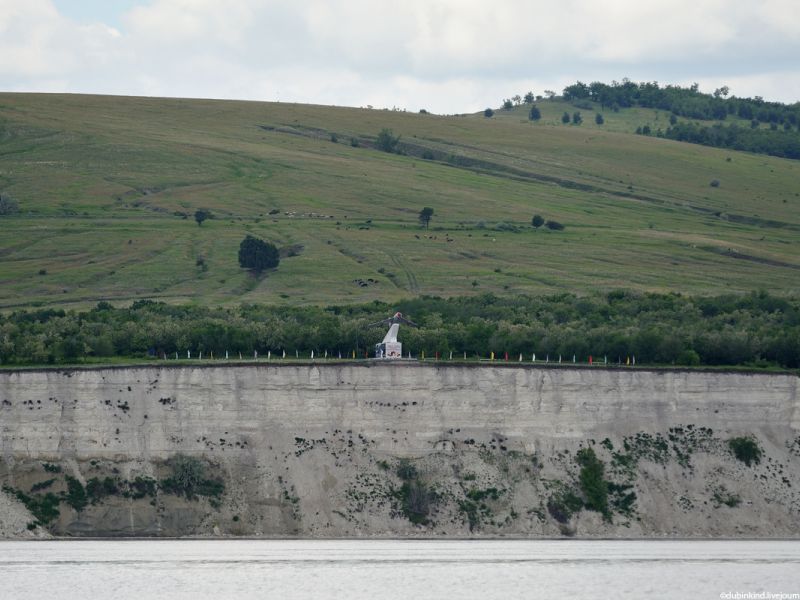 The main thing here is the speed and firmness of the hand, and it is desirable that there are no waves 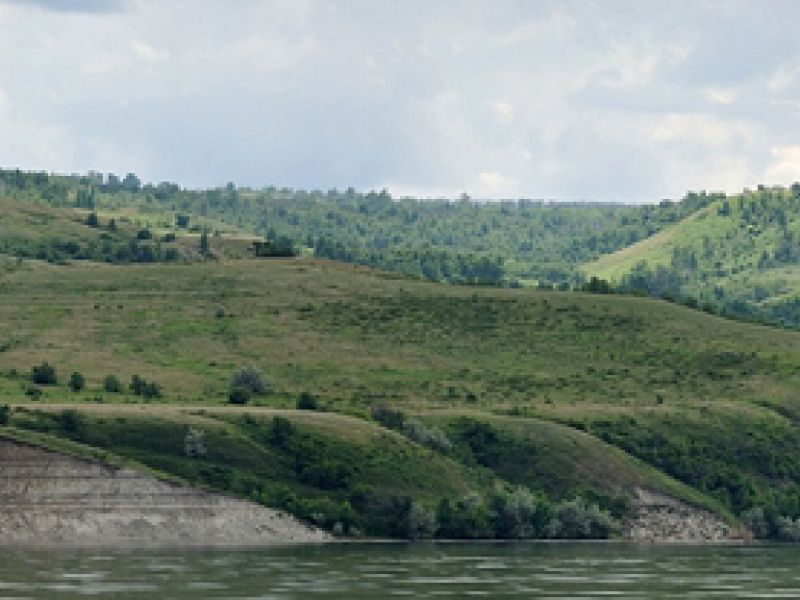 We met a white-tailed eagle at a steep cliff. This is the fifth one today, but the first photographed, albeit badly. But it is necessary to present at least some evidence of the meeting! The first kept in pairs, and very close to each other, immediately upon leaving Akhmat 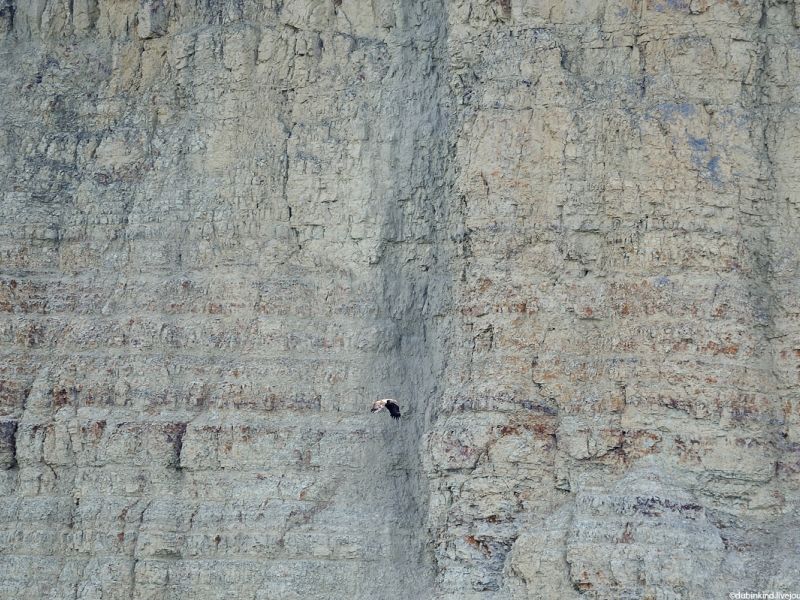 Behind this cape the coast goes down. There are a couple of shelters - "Wet Jackdaw" and "Lower Dobrinka", but we pass them by 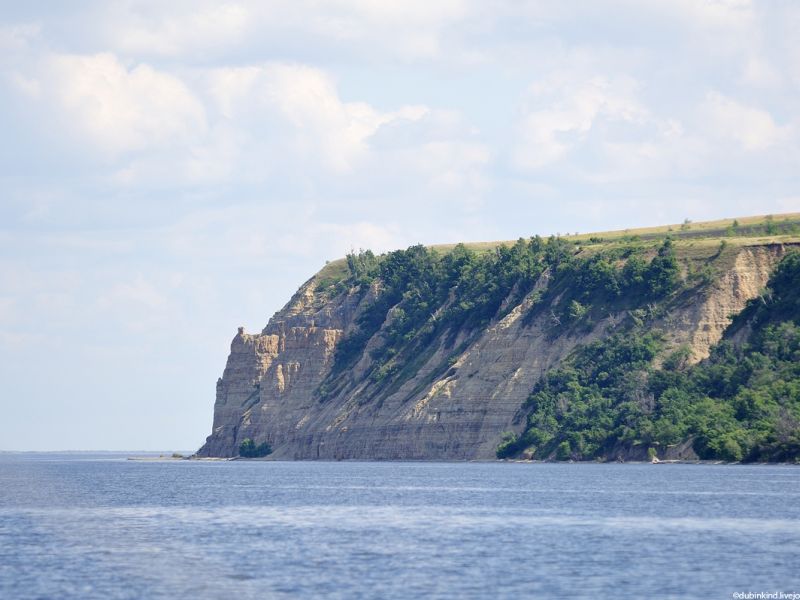 And at 18:10 we anchor in the Upper Urakov Bay. Very calm and beautiful place. The entrance is narrow, and then the bay widens slightly. Everywhere is deep and you can even stand on a keel sailboat with your nose straight to the shore. The first time they inflated and tested a new ace. It has a hard bottom that we pushed into place for a good fifteen minutes. And it adds an extra 10 kg of weight. But rowing on such a boat is a pleasure) 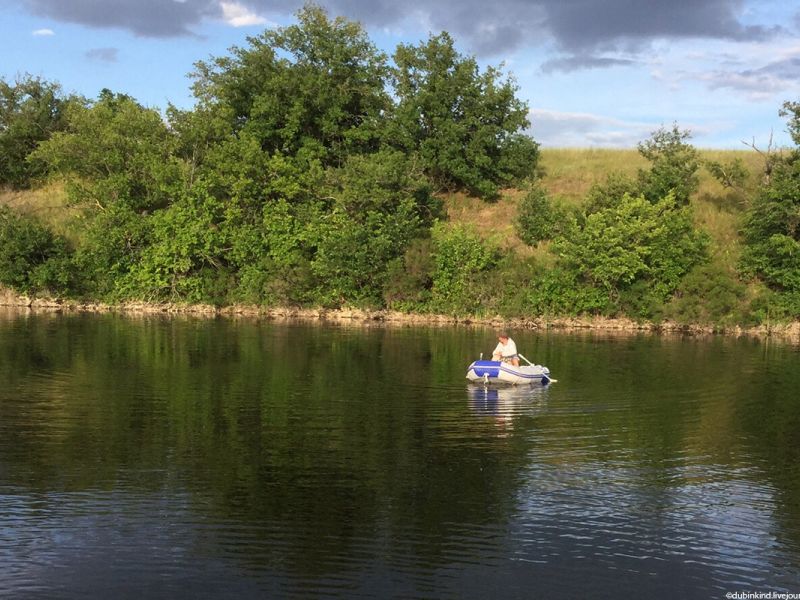 Rest, evening. Seagulls fly around and muskrats swim. But they don't want to be photographed. We went ashore, and Fenya saw and frightened off a stinging snake, and we only heard it. Therefore, Fenya managed to get scared, but we didn’t)) 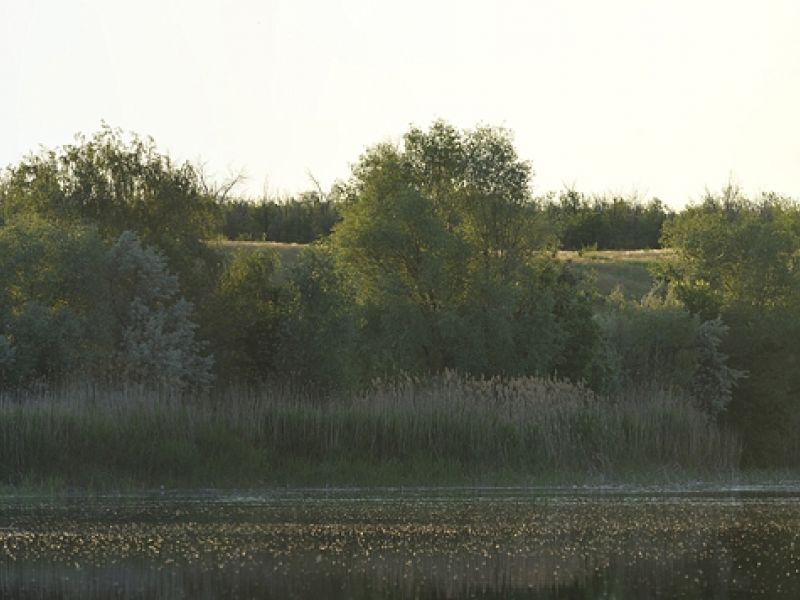 The night was incredibly calm. Walk Fenya in the morning, loudly stamping your feet, and go! 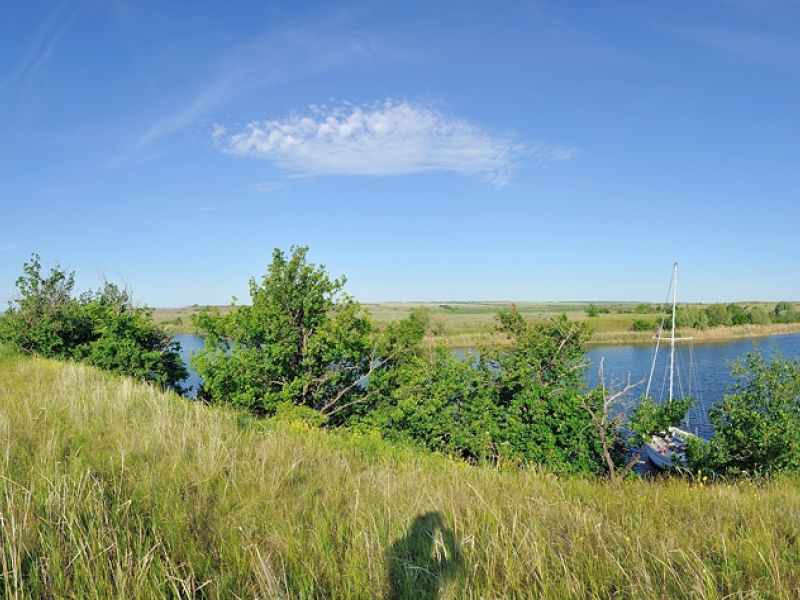