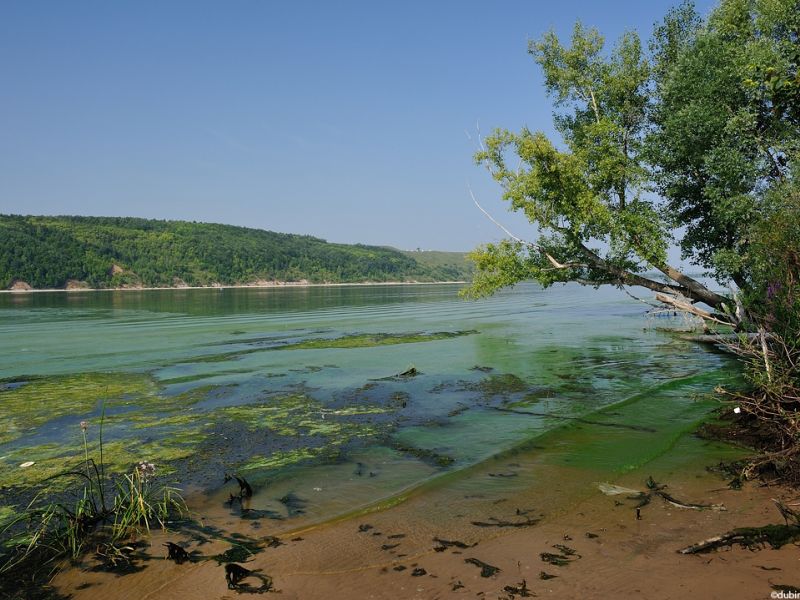 18 July. One o'clock. We just said goodbye to Kolya and Sasha. The planned parking lot is about 60 km away. Hot.

We go slowly, there is no wind. We discuss what we will do in Kazan. 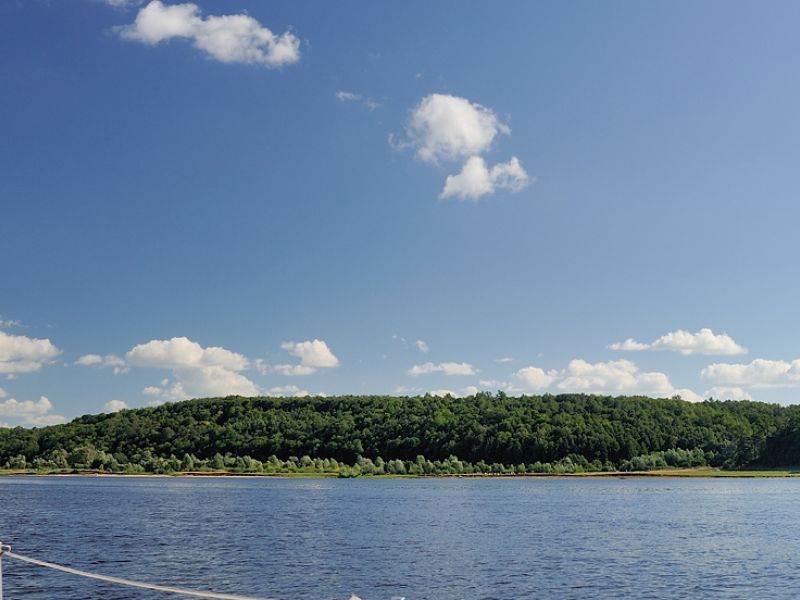 On the right bank they noticed a large mixed herd of cows and sheep. Previously, only a few cows came across our eyes. 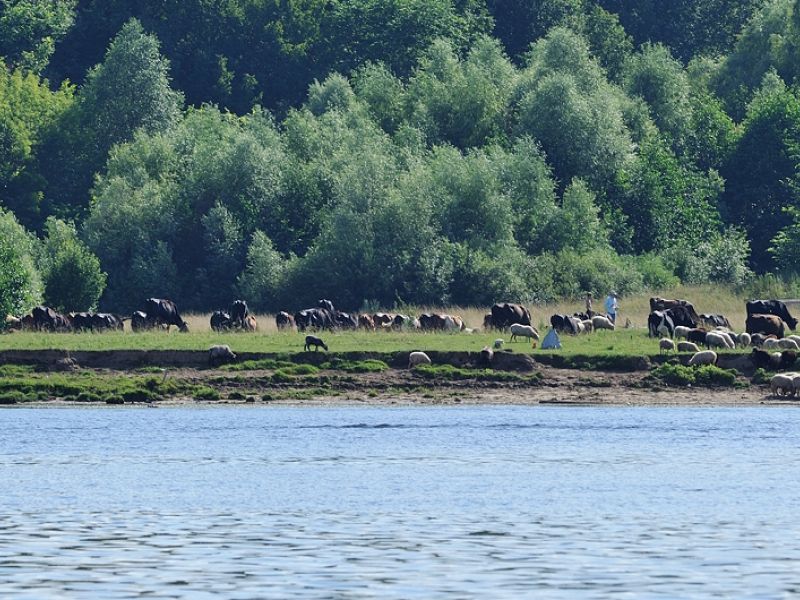 Almost all the time predators fly in the field of view. Mostly they are black kites. 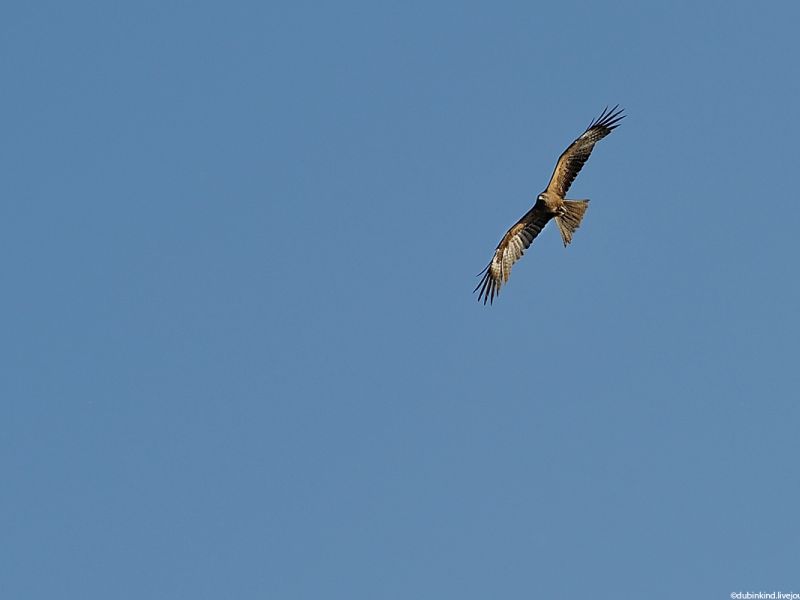 The right bank gradually becomes higher. After lunch we were raided by a large number of flying ants. Barely had time to close the hatches to the cabin. But there are hundreds of insects crawling on the deck, the mast, and even on us. And there is no wind. And we also saw strange waves - there was no one around who could let them go. It's not good)) 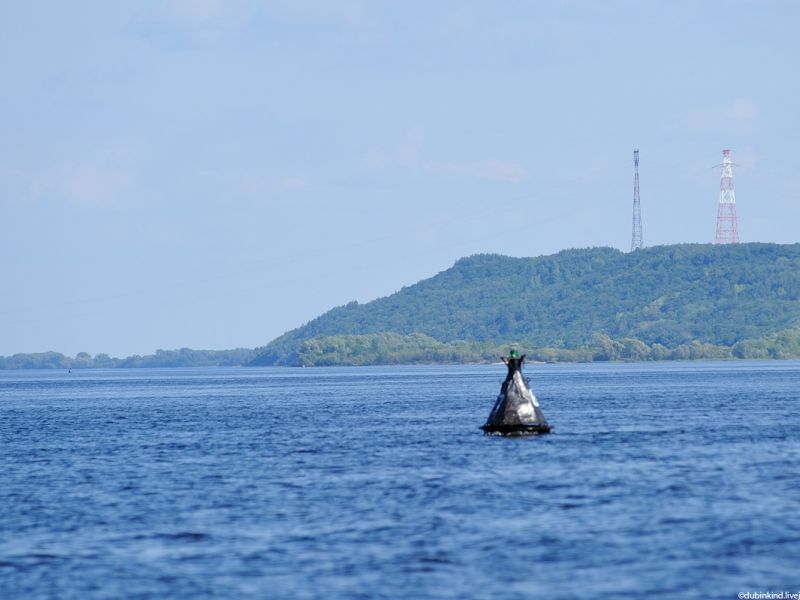 Fenya ran to the nose to look out for parking 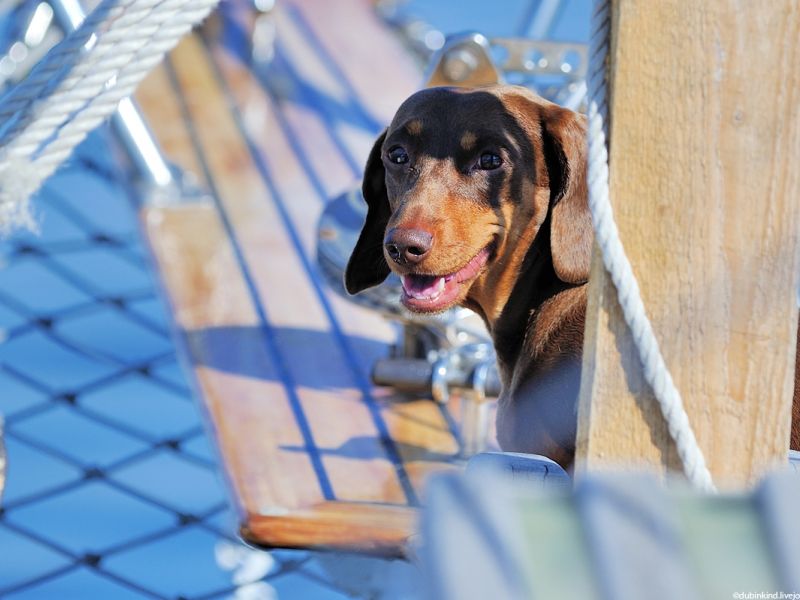 We wanted to stop in one of the bays of Kriushinsky Island, but its coastal waters are overgrown with reeds, and the shoals do not allow us to get close to the shore. Then we decided to go a little further. Immediately behind the island is a very beautiful high right bank. It is a pity that it is inconvenient to stay overnight near it. 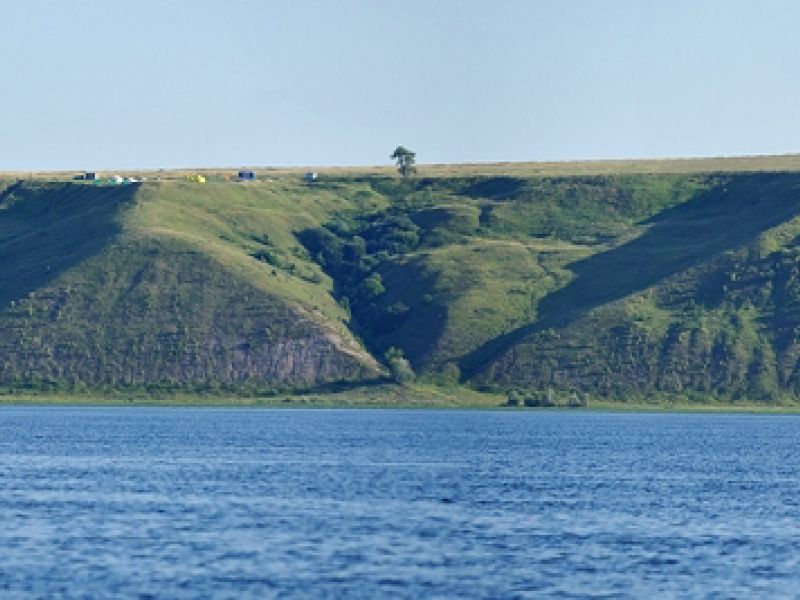 And on the left bank of the Volga there were many pretty beaches, but everywhere there were signs like: "the coast is for rent, stop - I'll shoot") .. having walked about two more kilometers, we finally found a suitable place without signs. True, when they came closer, they found a huge amount of algae. Well, okay, we are very tired during the day, we will stay here for the night. We dropped anchor from the stern, lowered the dinghy, and I swam to secure the mooring lines for the coastal trees. And Fenya swam with me. It was 10-12 meters to the shore, but I rowed there for five whole minutes, the oars got stuck inmud and free them cost a lot of work. Only near the shore was a strip of clear water. 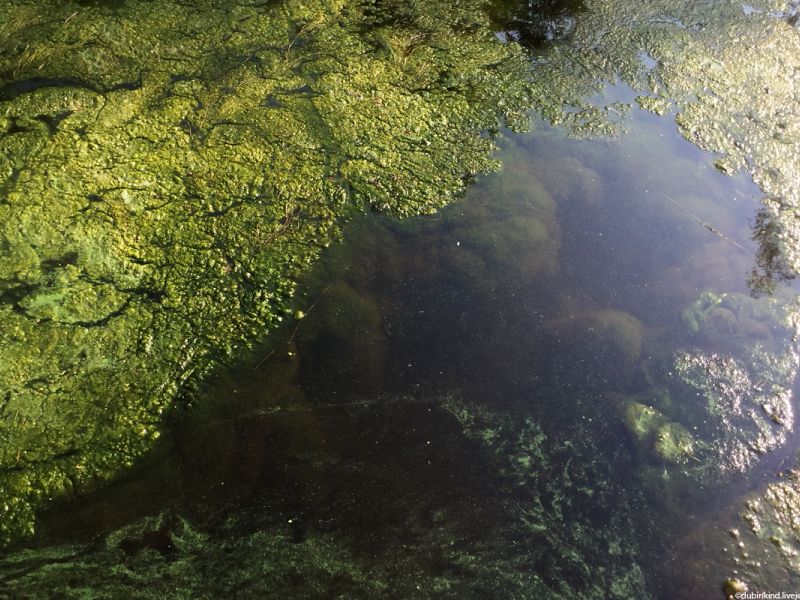 Having secured one mooring line, I had to climb into the water to get around a fallen tree, and Fenya, who had swum in the river for the first time the day before, without a shadow of a doubt, swam after me along a strip of clear water. I began to tie the moorings and got distracted, and then I heard Katya scream. It turns out that our dog decided that since she already swims so well, she will swim to the boat herself, there is no need to wait for me. Katya noticed her when she had already covered half the distance to the boat and climbed out onto the algae. Her short paws clung to the mud, but she managed to walk a couple of meters along it.trov. It wasn't easy, and when she stopped to rest, the seaweed beneath her slowly sank. If I had rushed to swim after her, I would never have been able to quickly break through this mess. I rushed to the boat, jumped into it, but missed and got on board. I fell on my back into the river and was covered by an overturned boat. And Fenya, meanwhile, overcame a layer of algae and swam out into deep clear water to the very board. That's just how she will climb onto the sailboat, she did not think through. Katya tried to catch her by hanging from the boat, but we have a high board and this is for herBut Fenya, seeing that Katya was nearby, and now would take her in her arms, stopped rowing and immediately plunged, leaving one nose above the water, which, like a float when biting a small fish, now and then went down. But here I arrived. Fenya in this situation was the least frightened of all, and soon she was again looking at the shore, where I sailed away to fix the untied mooring lines. And we did not take our eyes off her for a second until the end of the trip) 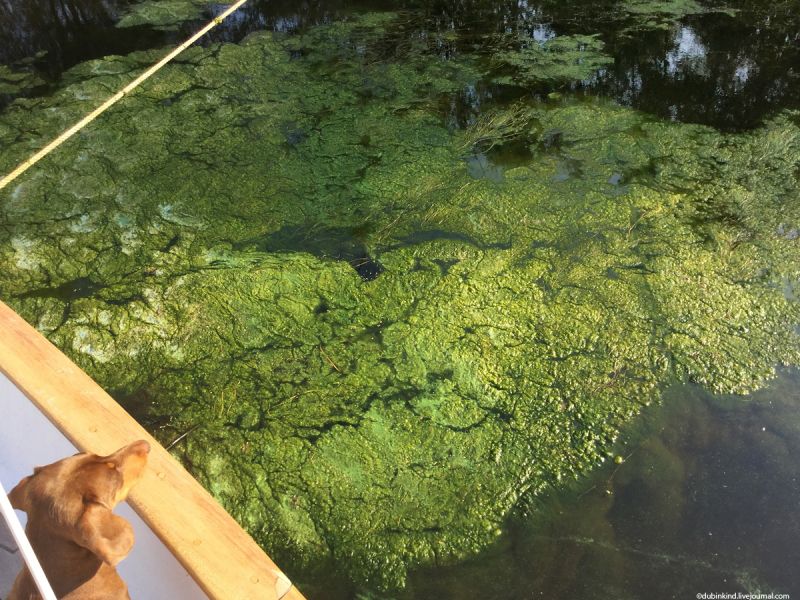 It began to get dark and I took some pictures of the beautiful coast left behind. 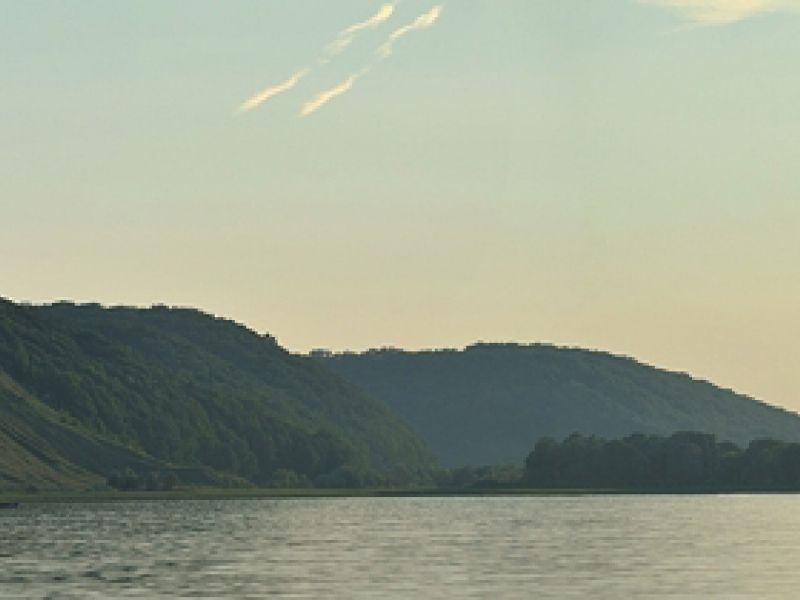 and sunset .. We drank a glass of red, for Fenino's happy salvation, and went to bed 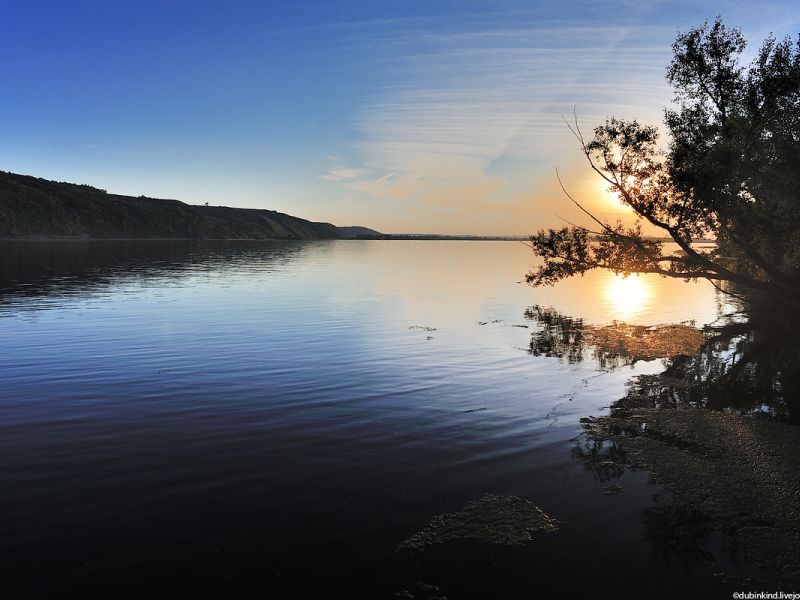 At night, I woke up a couple of times, it seemed to me that the boat had broken anchor and was sailing away, but when I went out on deck, I saw that the anchor and mooring lines were stretched just as they were. In the morning, at 6:30, I got out of bed and went to brush my teeth. Looking down the drain of the sink, I was surprised that the sun reflected from the bottom of the river and shined into my eye. And then it dawned on me that the drain was not hidden by water and the sun was reflected from the surface. Having jumped out onto the deck, I saw that the water had gone almost half a meter - the fallen tree on the right yesterday I went around knee-deep in water, just when Fenya swam after me. 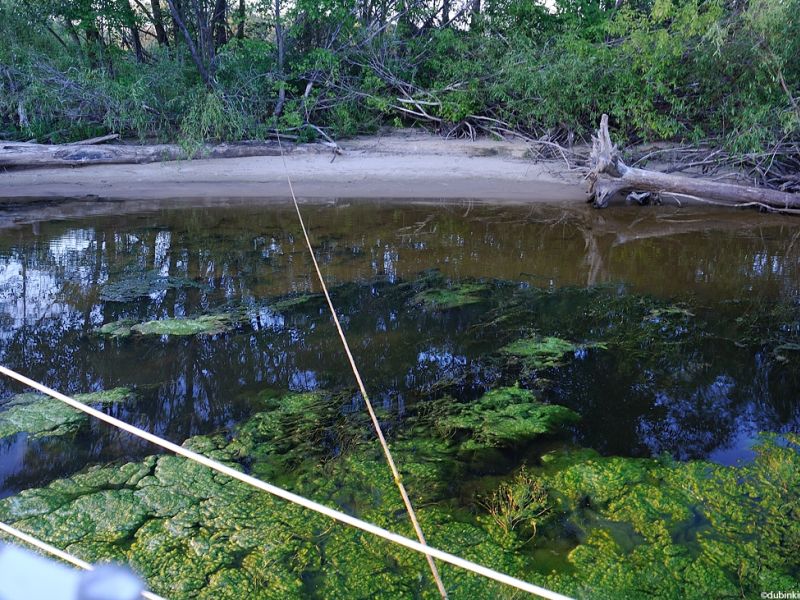 This is a surprise that I did not expect at all on our inland waters, after all, we are not in the English Channel, after all!))) I immediately remembered yesterday’s strange waves: apparently, upstream, at the Cheboksary hydroelectric power station, they dumped water, and we parked during a high level, and at night the level dropped and we dried up. See the blue stripe on board? It marks the line of contact of the water surface with the hull of a floating vessel (waterline) 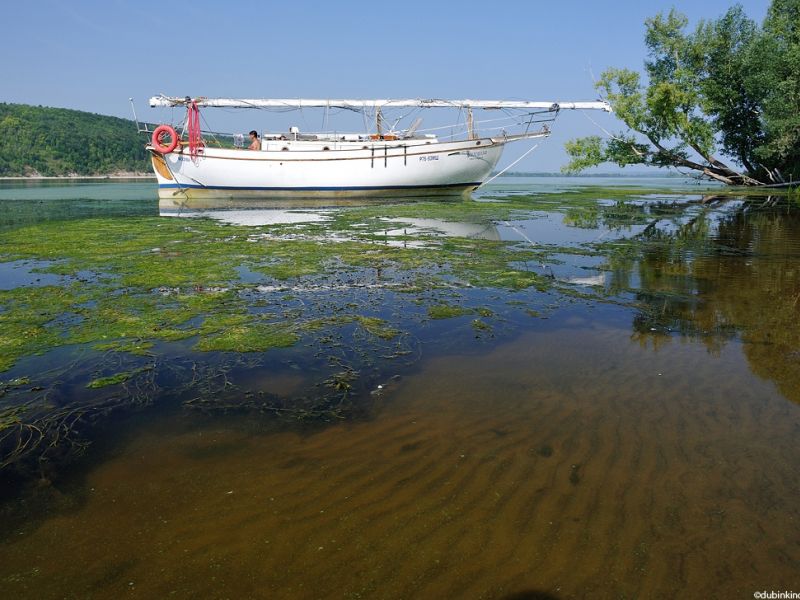 I would have noticed the water leaving at night, but look how exactly the bottom relief under the boat coincided with the keel line! As if they were specially ground in)) Not a single degree of heel in any direction! 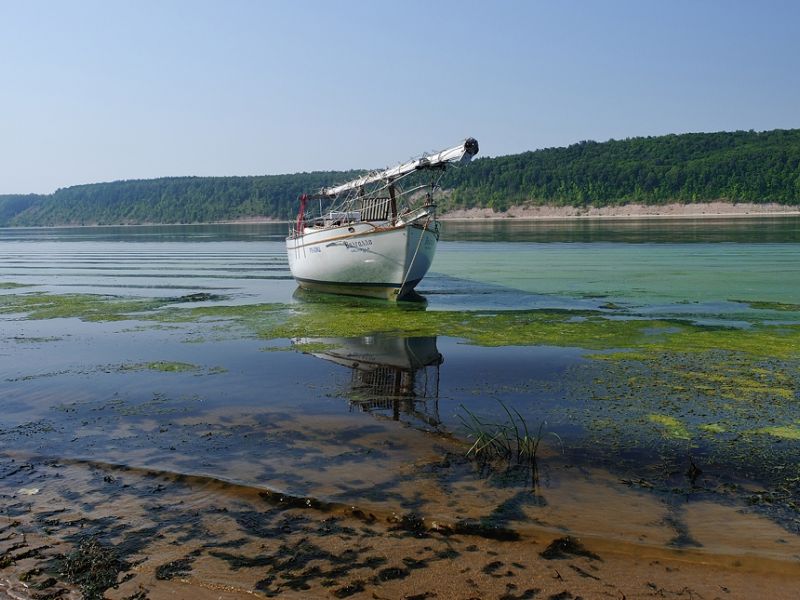 We got into the Internet, but nowhere did we find information about the schedule of water discharges. The fishermen passing by on motorboats did not pay attention to the fact that we waved our hands at them, apparently because from a distance it seemed that everything was in order with the boat. In the end, I got into the dinghy and buried in the middle of the river, in front of the next fishermen. To my question "Will they give water soon?" They made round eyes and said that there was plenty of water all around, and by the way, I'm in the boat too))) And only then realized the essence of my question. It turned out that at 10-11 o'clock the water will begin to arrive, butabout when it reaches yesterday's level, it's hard to say. We could only wait. I swam ashore and stuck a branch at the water's edge to make it easier to observe the rising level. 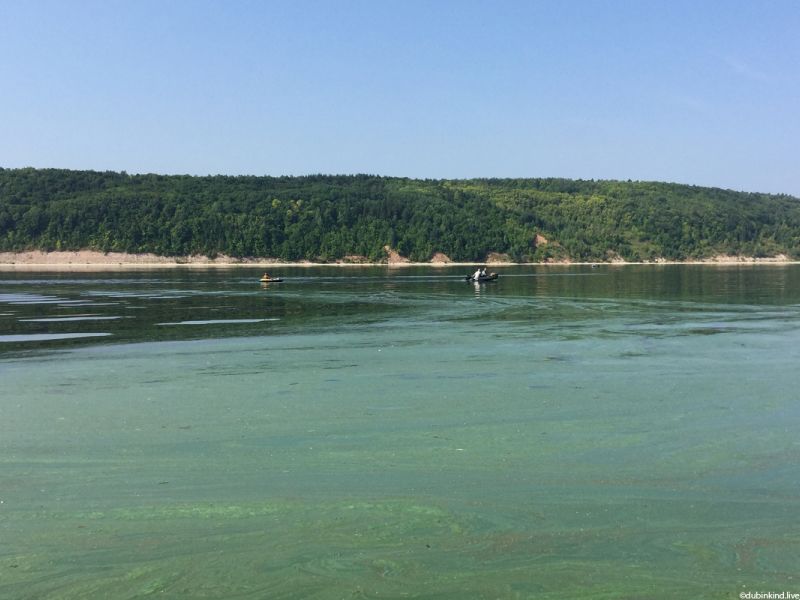 Fenya, after yesterday's adventure, was deprived of long walks on the water and decided to take up photography)) 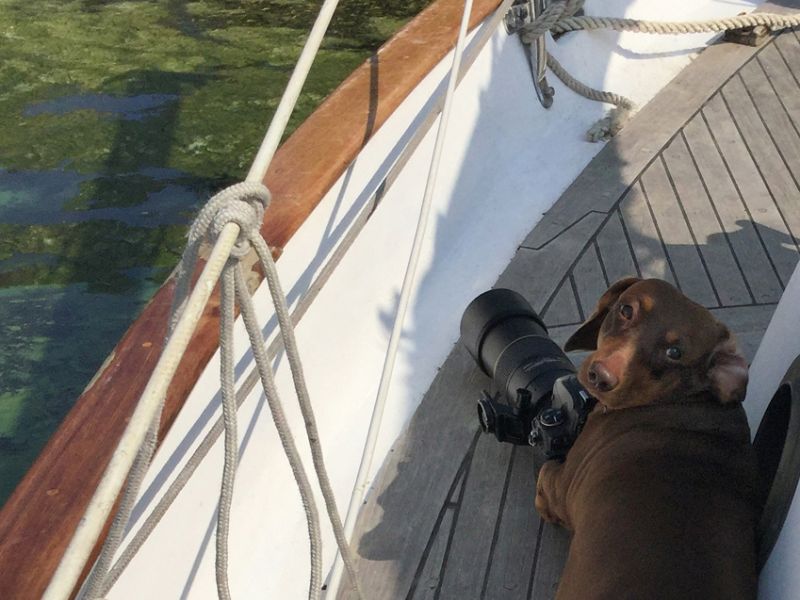 Soon we heard a whistle, and a strange couple flew into the flooded trees near the shore - a kingfisher and a sandpiper. It seemed to me that the kingfisher was chasing a sandpiper, but as soon as they sat down, they immediately lost interest in each other. The kingfisher bowed a little, as they like to do, and disappeared into the thick of the branches. 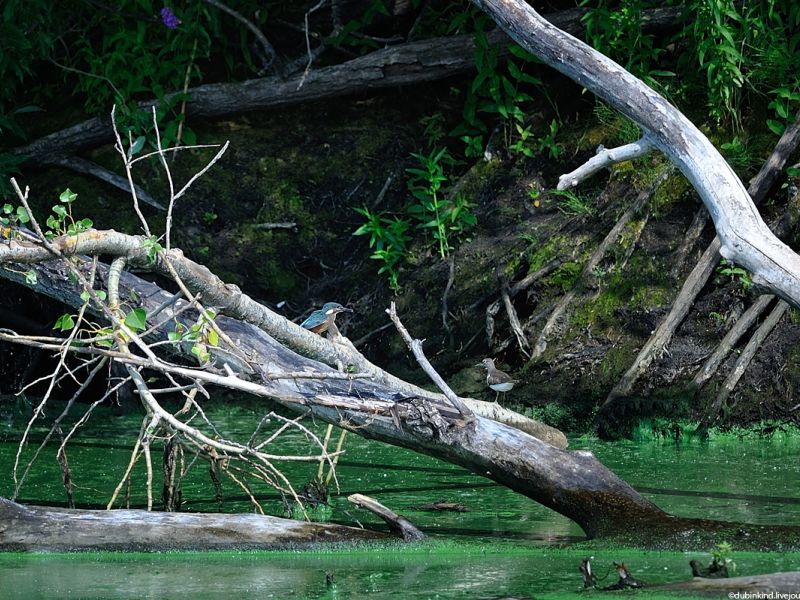 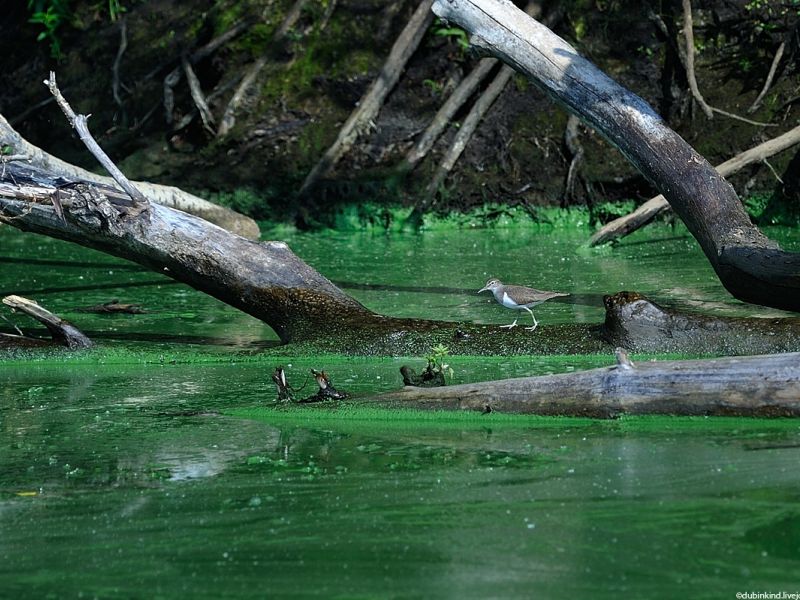 Until a flying kite drove him into hiding 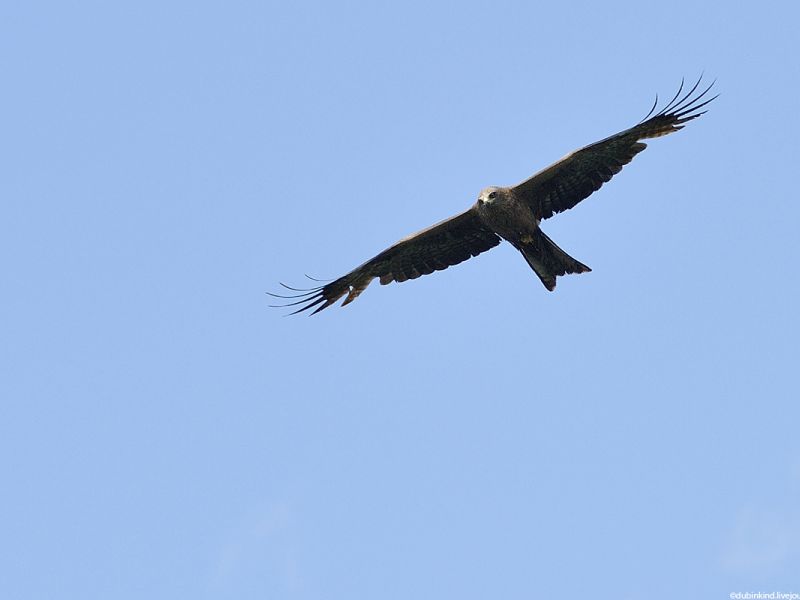 I switched to yurts standing on a high bank, but the haze prevented me from taking pictures of anything worthwhile. Judging by the map, a settlement is located here, but apart from these yurts, nothing else is visible. 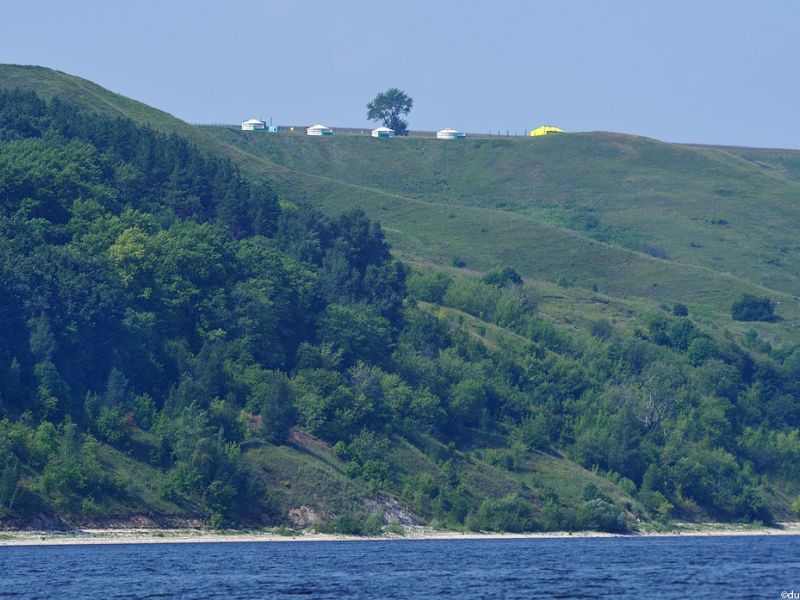 In the meantime, the water began to slowly rise, and the branch I stuck in the right half of the frame had already gone 15 cm from the shore. On the wave from the passing motorboats, we even began to sway a little. 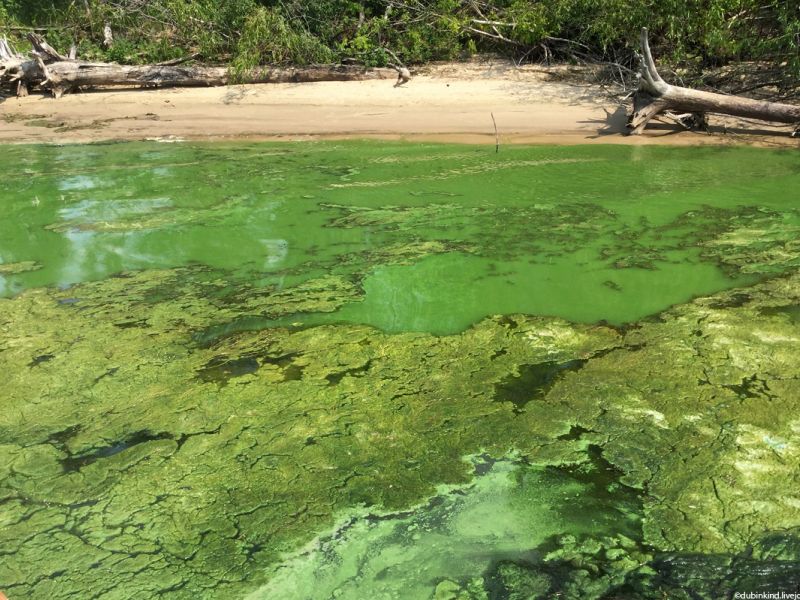 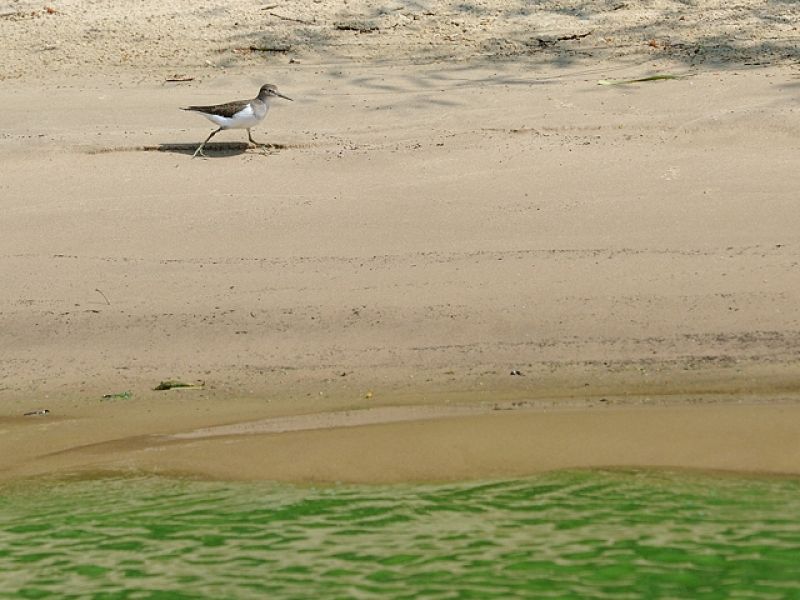 Until the kite reappeared

But he had no chance of catching a kulichka with so many hiding places. By 11 o'clock more than 5 cm of water had already arrived, and even the smallest wave began to rock us. Then I brought a second anchor on the boat. Soon it will be possible to try to drag yourself into the depths 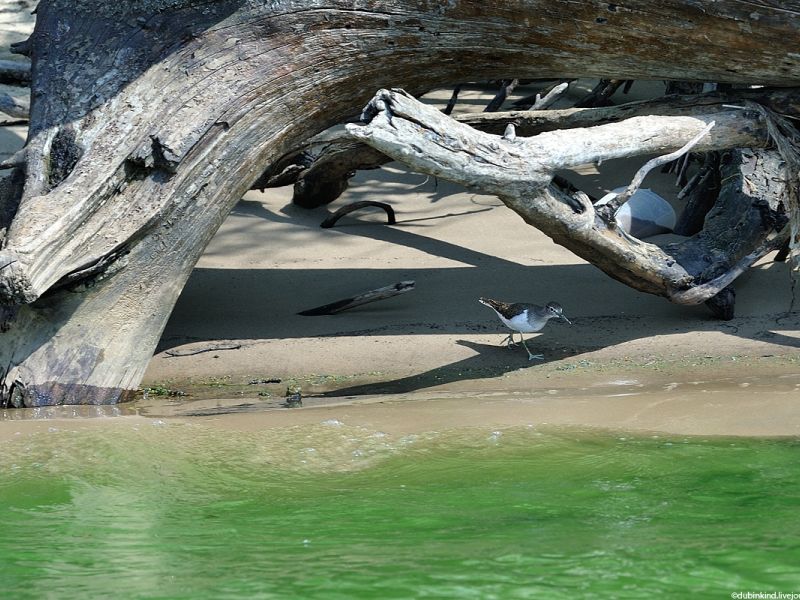 At one o'clock in the afternoon we began to pull on the winches to the anchors, but so far the boat is only turning a little on the lower point of the keel. Half an hour later, Katya offers to start one of the anchors from the bow and turn the boat around. And this helps, we didn’t even have time to turn around on the bow at 20 degrees, as the stretched stern anchor line pulled us to the depth!

If you try hard, there is still time today to reach Kazan in the light! 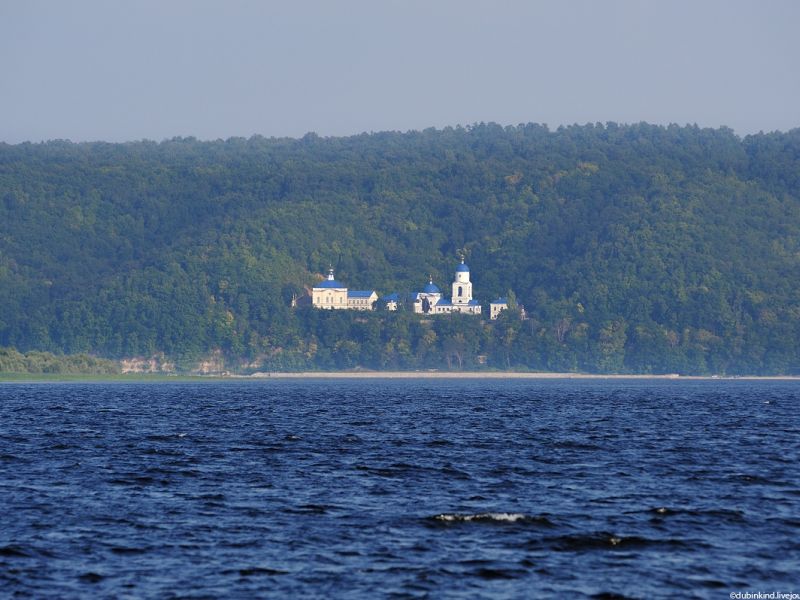 At 18:20 we pass the bridge in Naberezhnye Morkvashi. There's a little left.. 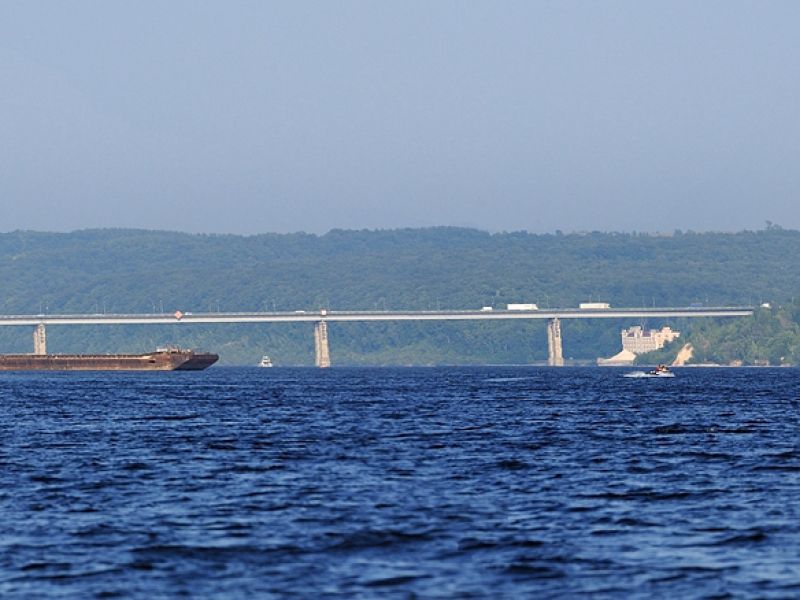 At 19:15 we enter the city of Kazan, it gets dark quickly. For the first time in a long time, we turn on the running lights. There is no beautiful sunset, only a clearly defined sun. At 20:25, already in the dark, we approach the guest berth of the Lokomotiv Yacht Club. Katya and Fenya are mooring the boat on their own, and I ran to check in with the administration. 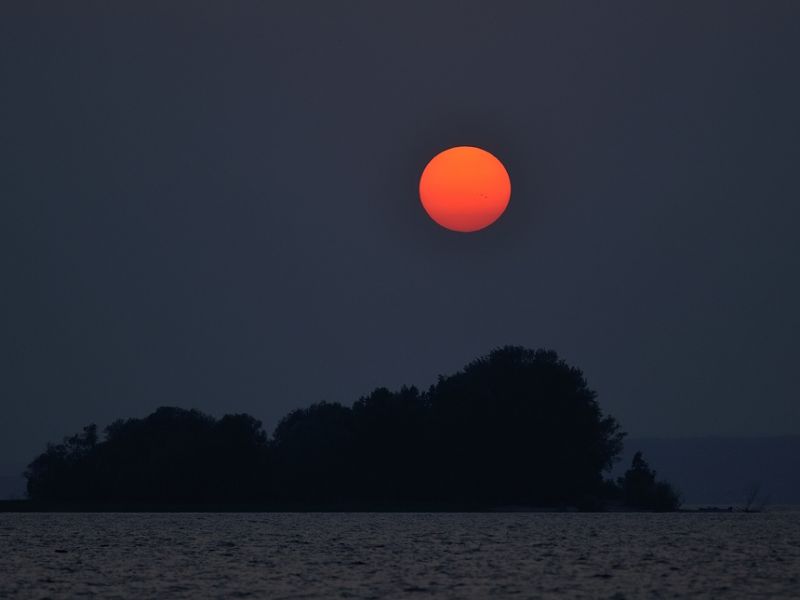