Well, we found an approximate parking place, the coast is beautiful and deserted, and it seems that there is where to take a walk

We go along the coast and look out for something to become attached to. There are enough trees, but they all grow high, and you have to climb a 5-7 meter cliff to get to them. You can, of course, not become attached, but simply anchor, but despite the cliff, it’s a bit small here and you can’t get close to the shore. We, on the other hand, want to be guaranteed to be closer to the shore, and not to spin around at anchor throughout the water area. 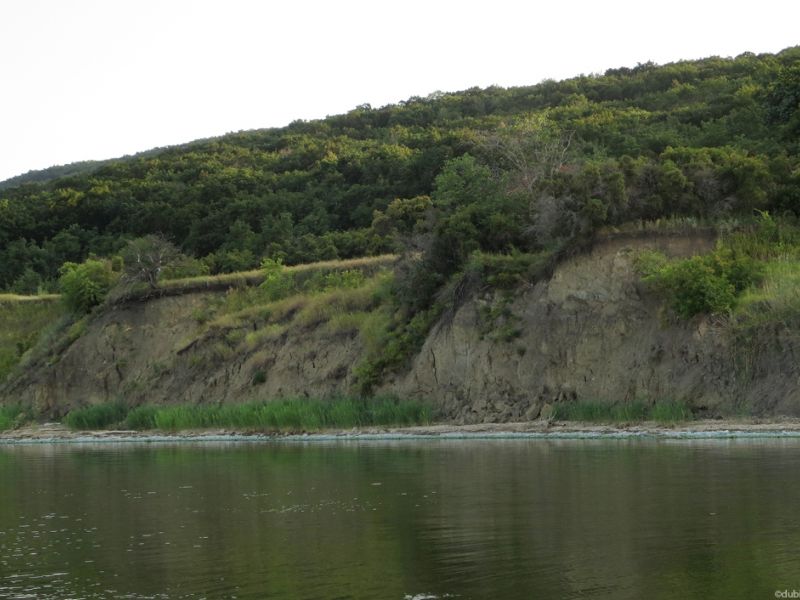 Having found a tree growing lower, we throw an anchor in front of it from the bow, I jump into the boat and row to tie the moorings. 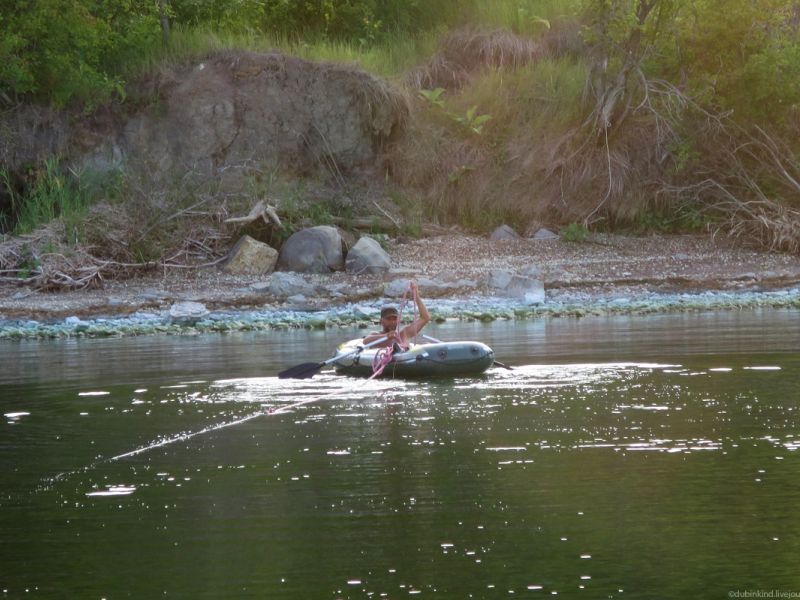 I rowed for a long time, and I had to increase the moorings twice - the sailboat was a little offshore 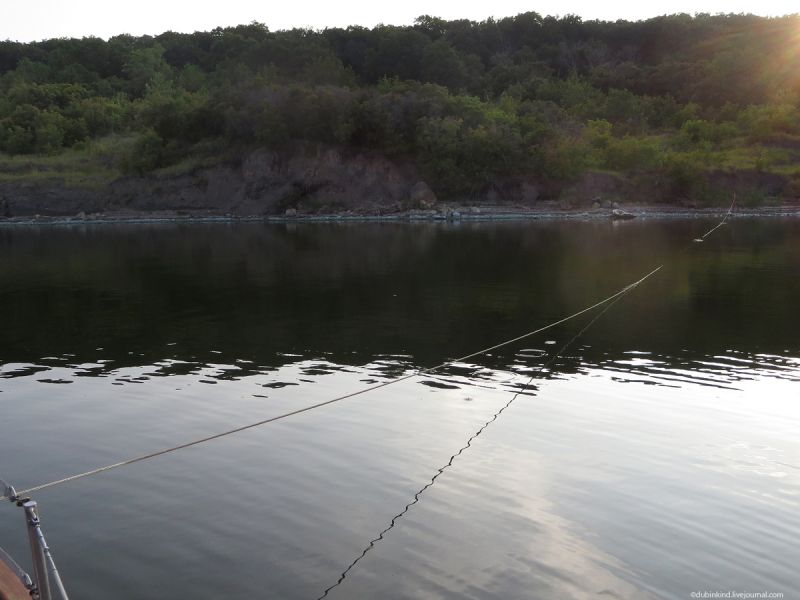 So then I had to drag it, and it was hard .. The fact is that, as it turned out, there was a strong current here, which I did not notice at first. Are they dumping water again? Let's get up, we are still a little further from the coast, and away from sin, so that it doesn’t work out like that time)) 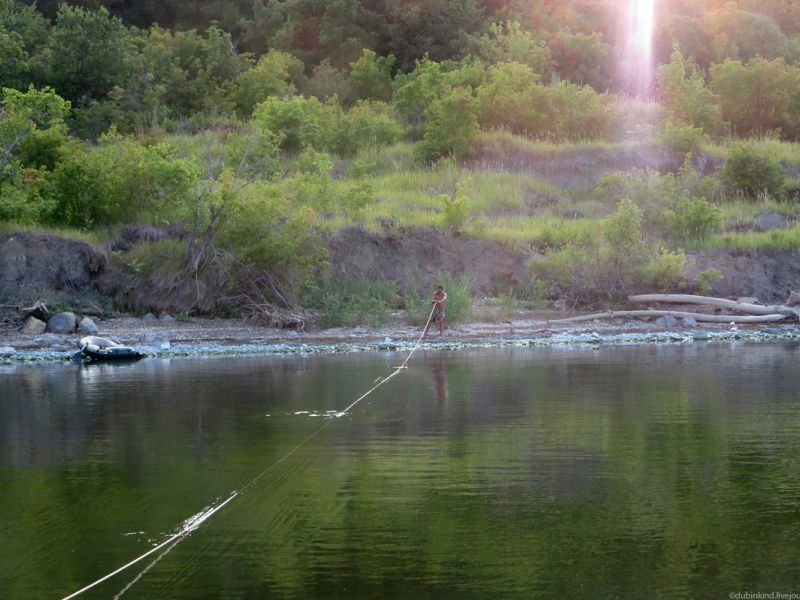 We pulled ourselves up, tied up, and then we had to rinse the mooring lines for a long time, the water here was like greenery. 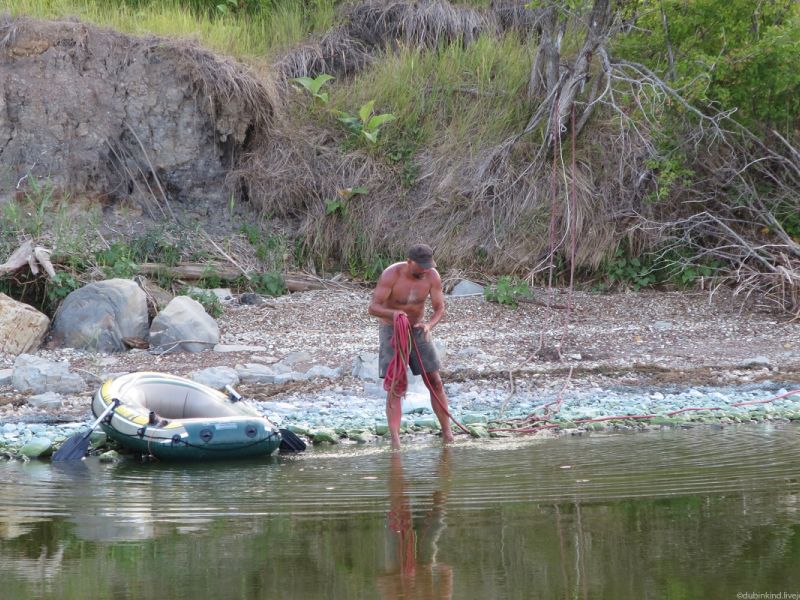 Malachite coastal strip) When I rowed up to the shore on an inflatable, I even dreamed about what beautiful green pebbles I would pick up now, until I swam closer, but I didn’t get a better look at these jewels) 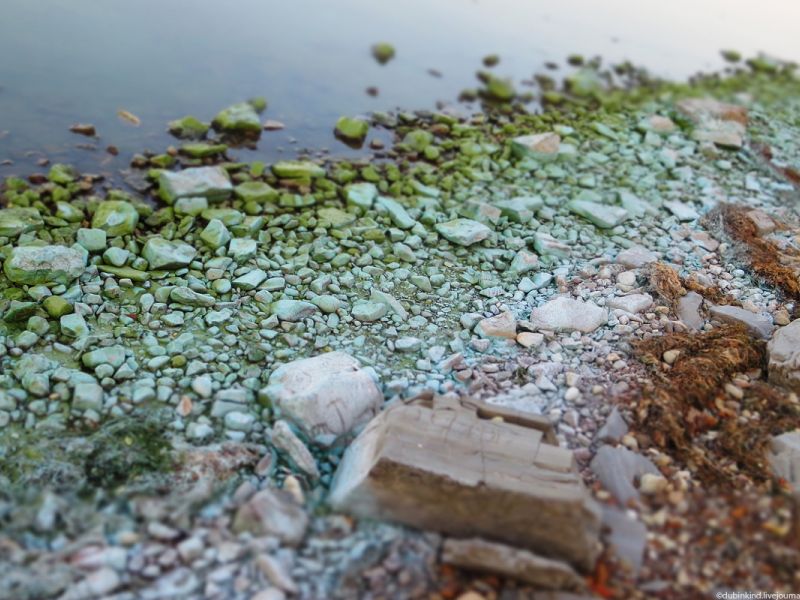 It looks like the Volga has been blooming here for several weeks, but it looks beautiful from afar. But you need to walk on these stones very carefully - it’s quite easy to turn on them. 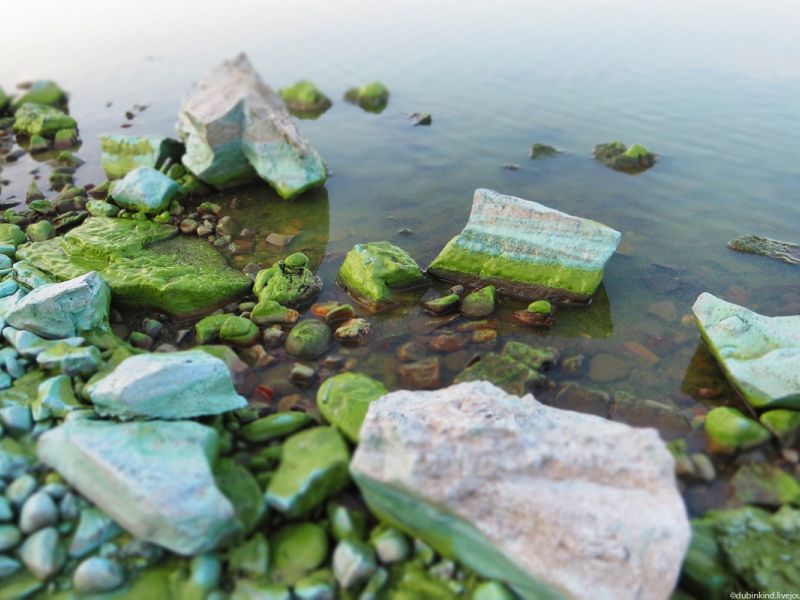 And such beauty stretches as far as the eye can see. I took Katya and Fenya ashore and we went to look for a place where we could climb the cliff. There were a lot of dead fish lying on the shore and Fenka showed an increased interest in her, and we, as best we could, tried not to let her near these "seafood", teeming with maggots) 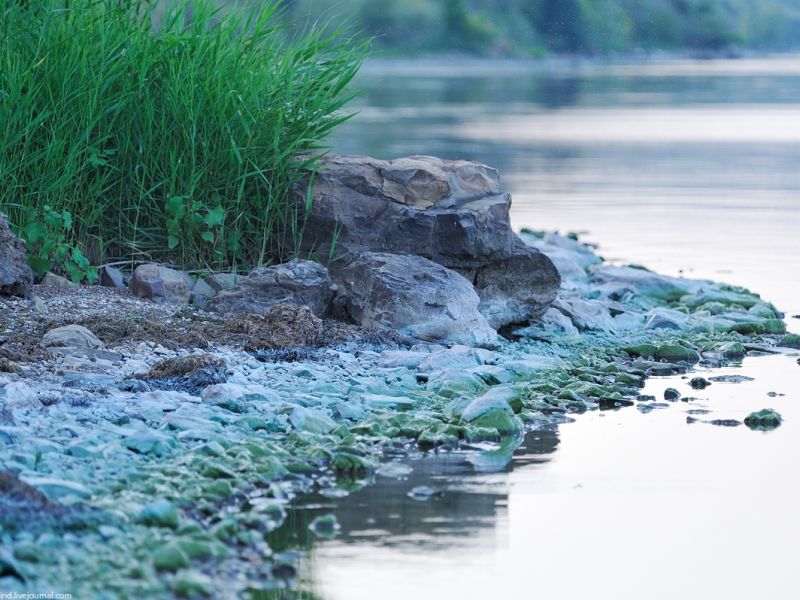 The sun was already setting, and we tried to climb higher and survey the surroundings until it got dark 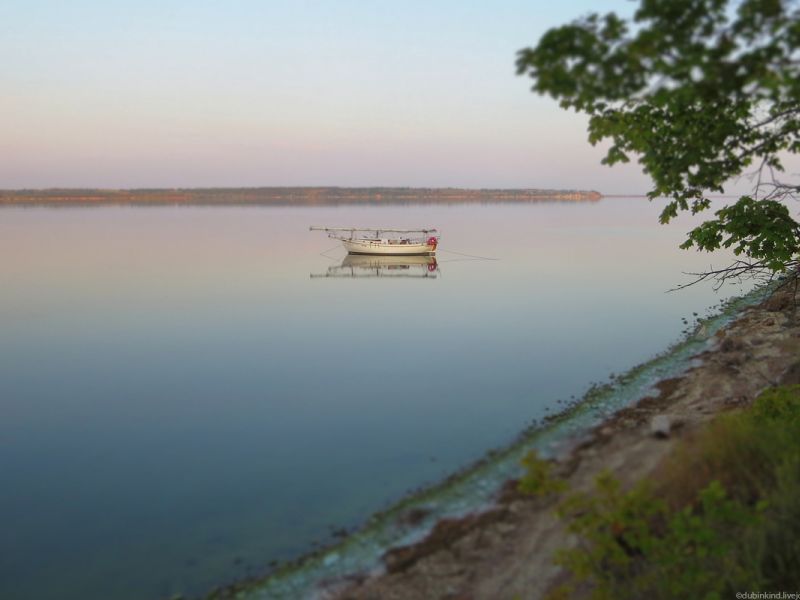 Not without difficulty, having climbed the first step of the cliff, we found ourselves in the realm of multi-colored herbs. And for Fenya, apparently, various new smells - she was carried away into the thick of plants, and here and there we saw only her nose sticking out in the wind) 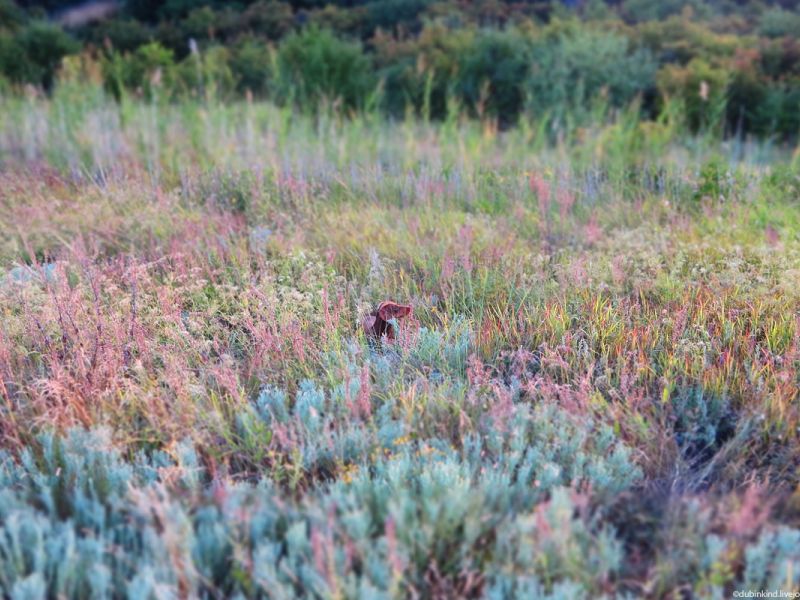 And then we climbed even higher. But after each subsequent ascent, when it seemed that the peak had been reached, the next step opened up. All in all, we didn't get very far. But even from here a very beautiful view of the Saratov reservoir opened up. But the sun has already set 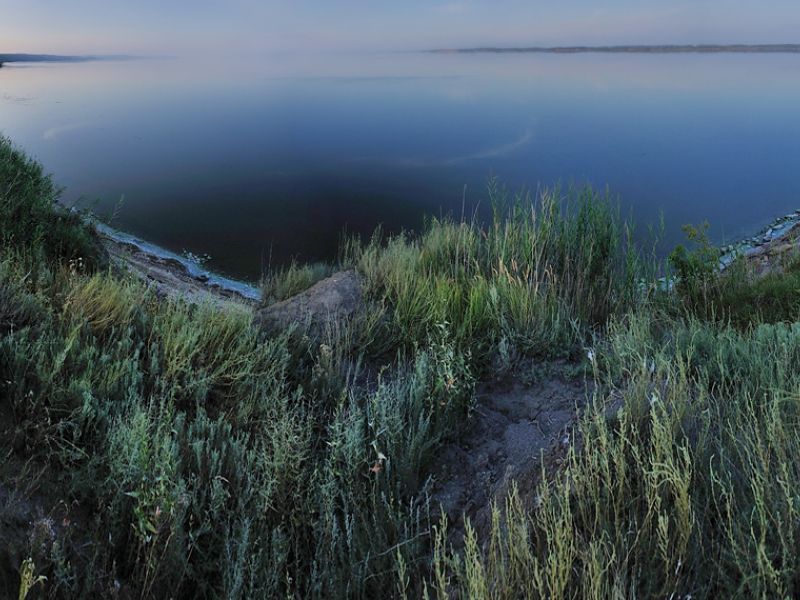 Until it got completely dark, I started taking pictures, Katya admired the views, and Fenka explored the surroundings. We were in a great mood. 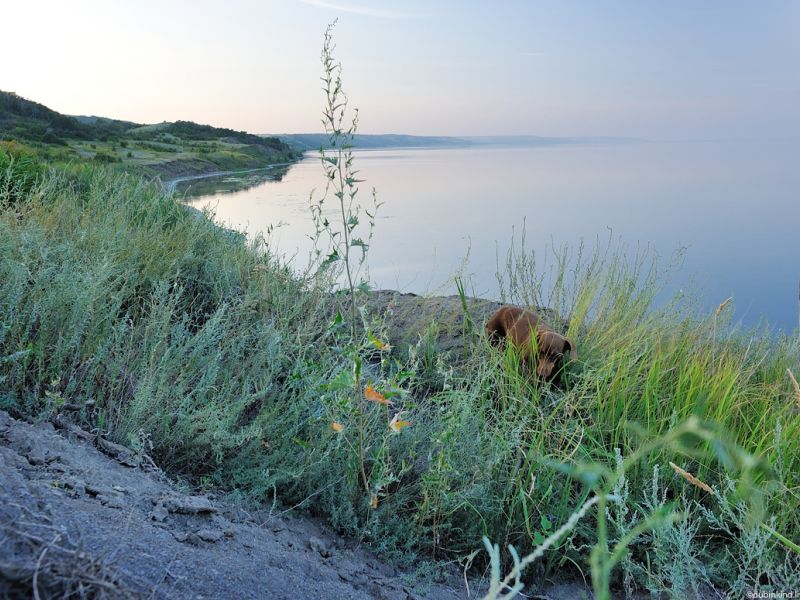 And for complete peace, all I had to do was climb a tree 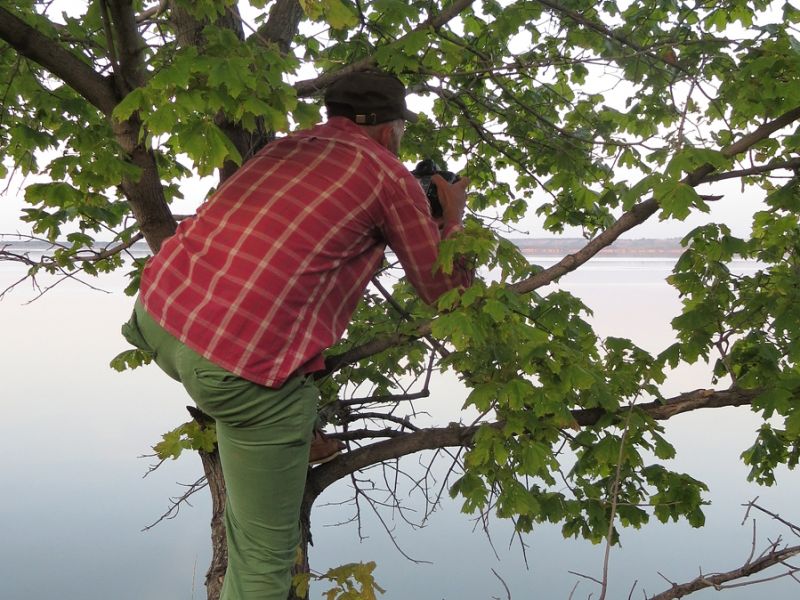 But not just like that, as you thought, but to take a photo of the boat through the foliage) 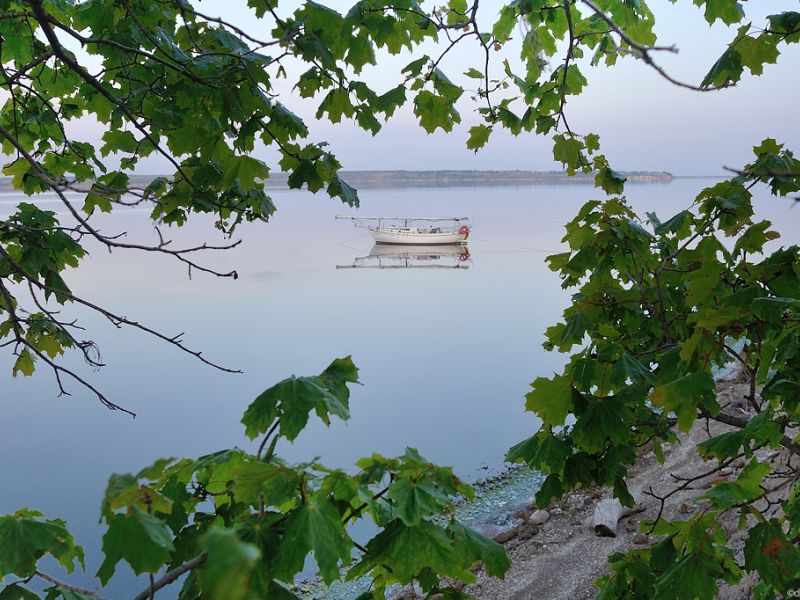 We went down to the shore and wandered slowly to the inflatable. From time to time, right at the shore, fry jumped out of the water, frightened by some underwater predators, and Fenya also joined in the hunt. 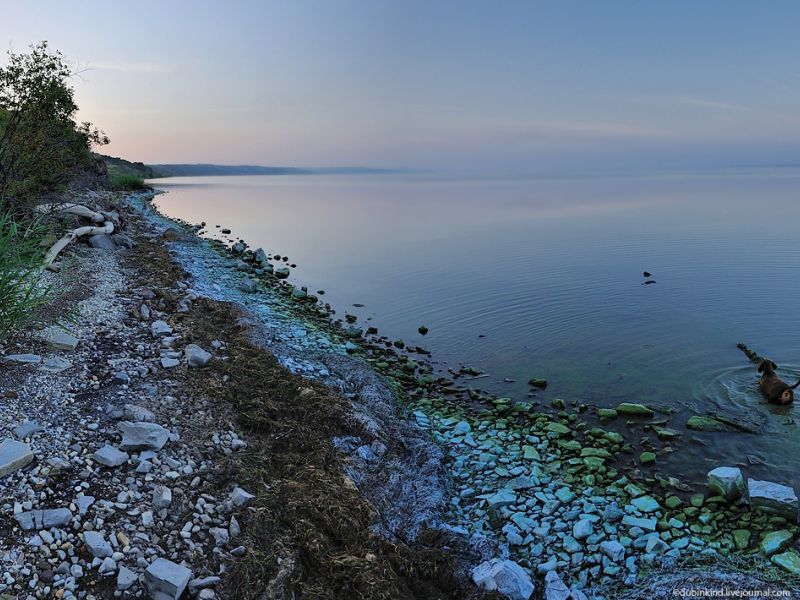 Fenya, as a beater, helped the predators, most likely perches, to deal with the fry, but she herself didn’t get anything, and we didn’t let her into the dead fish on the way back 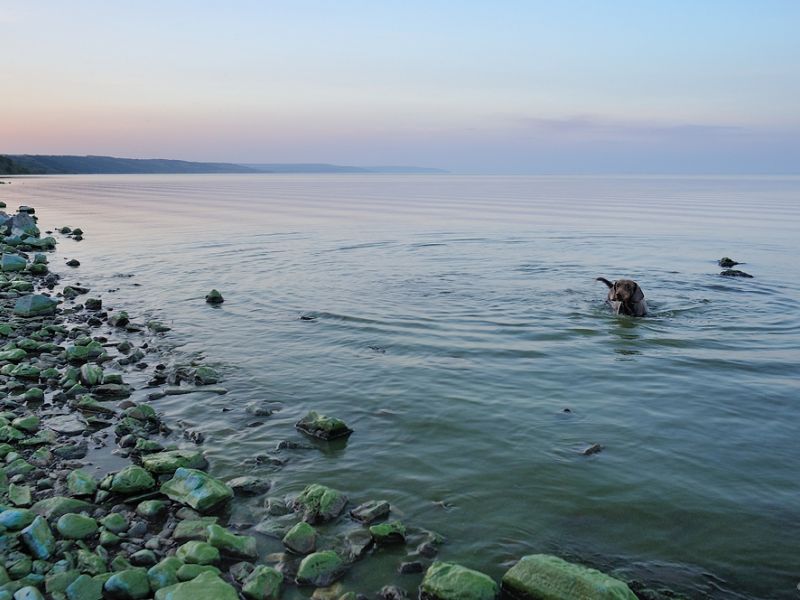 Therefore, returning to the boat, she was offended, took a bottle of soothing and locked herself in her cabin. We also went to rest - tomorrow we will pass the last gateway of this season ..