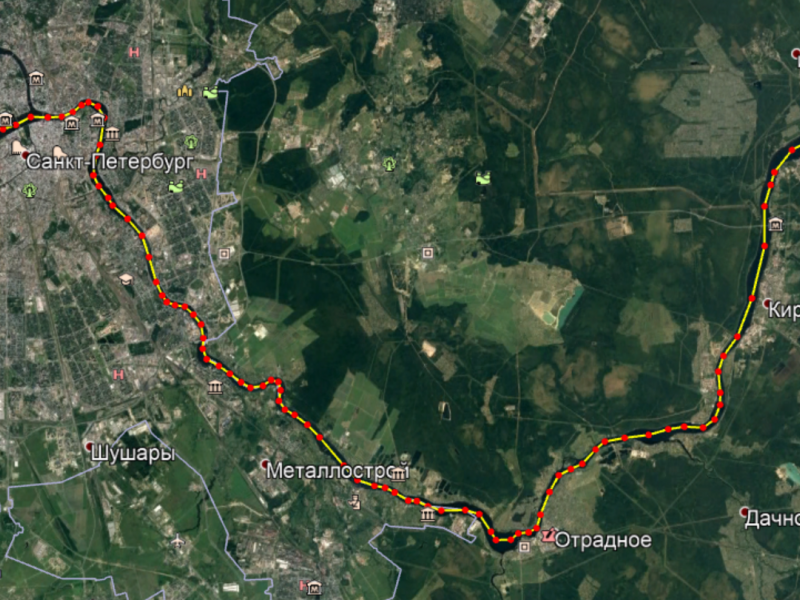 The journey began on the night of June 31 to July 1. At two o'clock in the morning we must pick up a pilot who will lead us under the bridges of St. Petersburg. We do not remove the mast, which is 15 meters high, and go to draw bridges. Everything was checked, more than once, a supply of fuel was made for the boat and for us)). A team of three people. Me, my wife Katya and my brother Kolya. Only I have sailboating experience, and Katya can’t even swim))

I feel excitement, yet 10 years have passed since my last river trips and I forgot something, but I never knew something, but nothing, we’ll break through)) Half an hour before meeting with the pilot, we leave the Central Yacht Club. Well, the pilot is on board, a great man, we relax a little and start to have fun. It is difficult to calculate how many times we have been in St. Petersburg over the past year, but we never managed to admire its beauties, and now the whole of St. Petersburg slowly floats past us, illuminated by many lights. 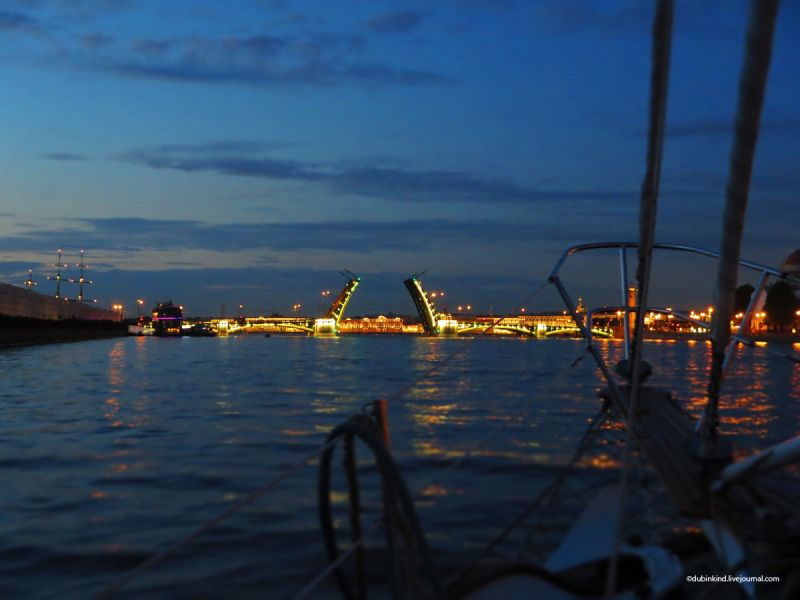 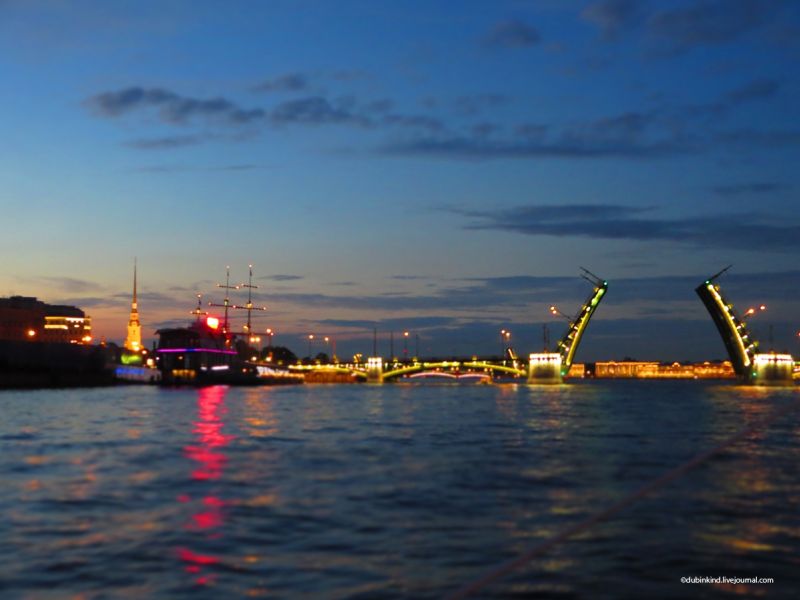 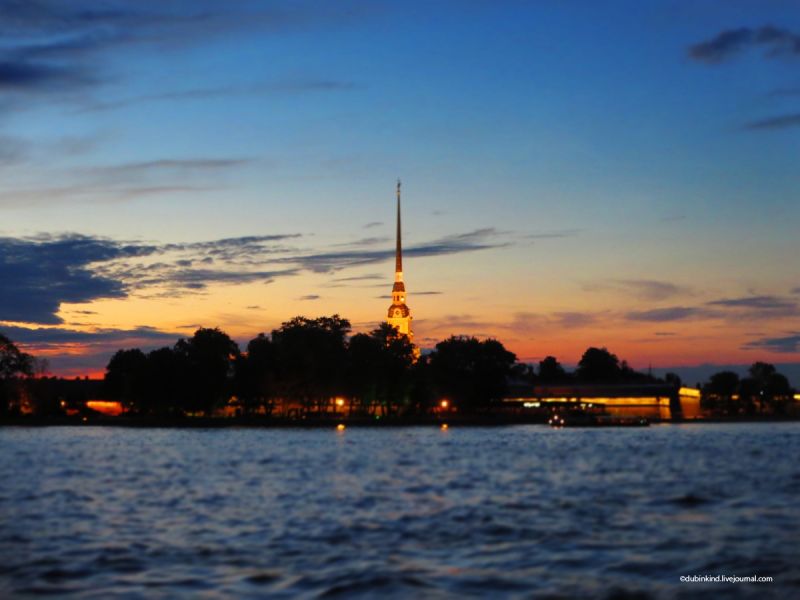 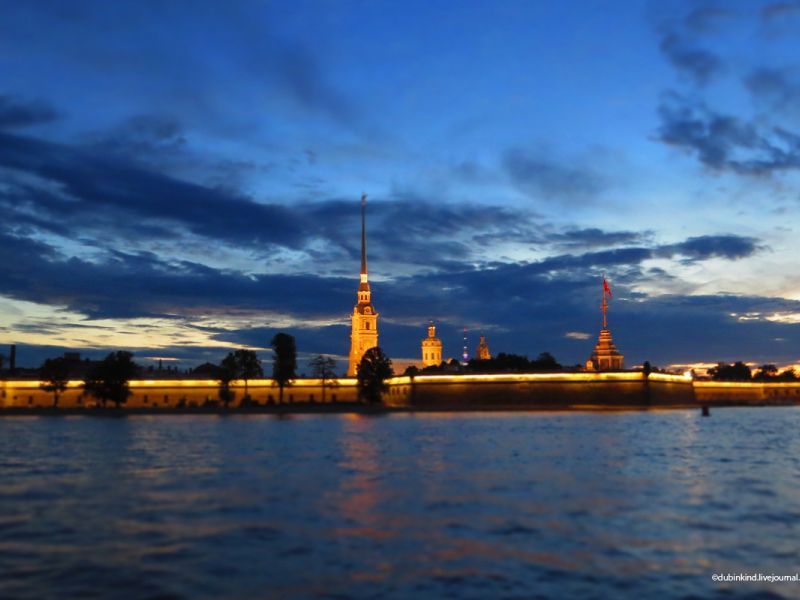 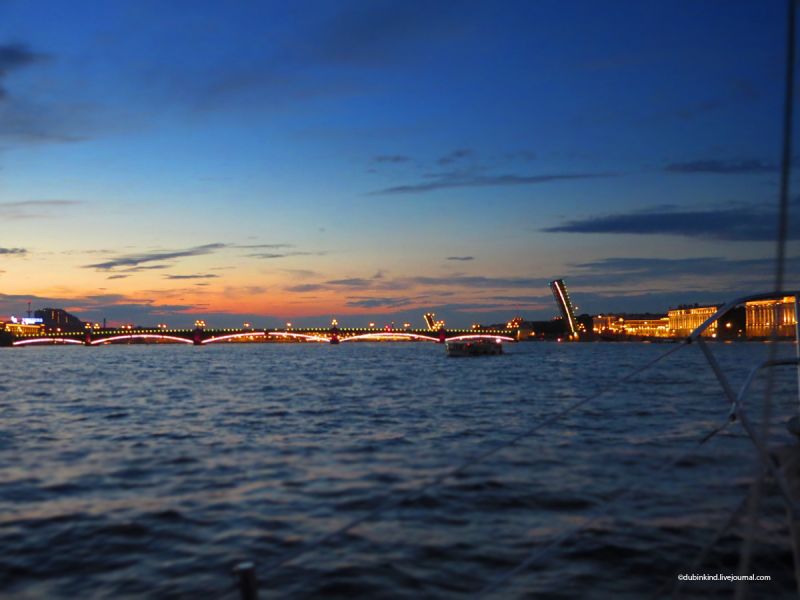 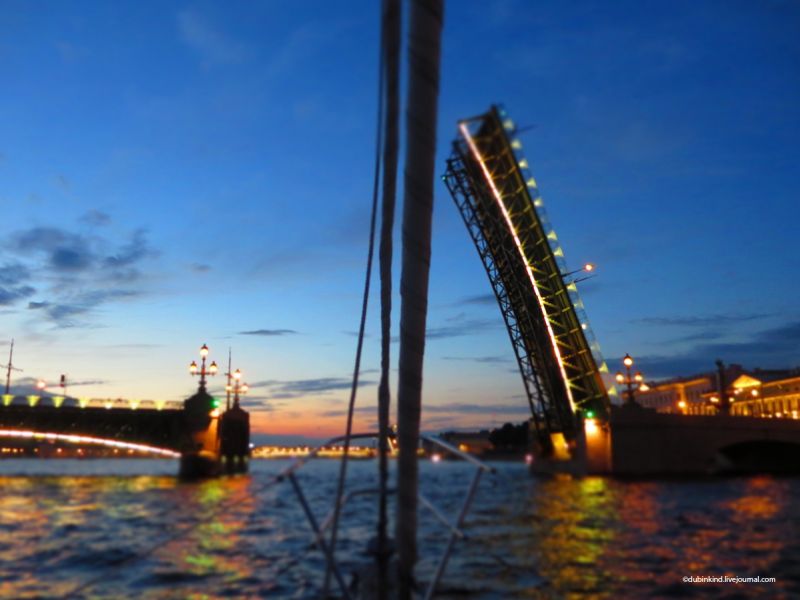 Before the last bridge - the first surprise. Directly in front of us, the bridge begins to close - they forgot about us. It's good that we have a pilot with us, who quickly resolves the situation.

At about 5 am we disembark the pilot at the River Station and continue on our way. Ahead are the treacherous Ivanovskiye rapids, with which the old captains frightened us, and the Kuzminsky railway bridge, which at one o'clock in the afternoon should be built especially for us according to a pre-filed application.

We are passing Ivanovsky ahead of schedule: it's okay, the first time I talked to the dispatchers on the radio, everything is fine. Strongly in advance before the wiring we come to the bridge and anchor. Take a break and check everything again.

!!! We checked ... in the trough under the engine a few liters of solarium, a lamb to drain the water fell off the fuel filter, urgent repair! Yes, the bridge is being raised for only an hour, and the application must be written in three days. They plugged it with something, made a winding, like on a champagne cork, it seems to be holding, we just need to pass the bridge!) ..... it doesn’t hold, it’s 15 minutes before the wiring, the dispatcher is already giving the command for a low start. The brother can't stand it and plugs the leak with his finger: "Let's go!" - he says, lying on a running diesel engine, if only to pass the bridge!) We approach the bridge and .... we stall ... why? no time to figure it outwe turn the staysail and go back to the anchorage. What a bummer, the first day of the trip!))

I talked with the dispatcher, and even from the main department of the Volga-Balt they called, explained the situation, we are fixing it. There, by the way, in the management of the Volga-Balt, excellent men work. An application for the next wiring will be written for me, but now only on the 3rd. I climb into the engine compartment and see the cock for shutting off the fuel line from the tank. I closed it myself when I saw the leak. Here the engine worked while there was diesel in the hose, and stalled. Che, it's logical!)) Great, one less problem, the diagnostics are finished!)))

We call stores for filters: there is nothing anywhere, only on order. We looked on the Internet, it seems there is a highway nearby, maybe there will be shops, although there is little hope of buying a new filter for Perkins "the marine series of the early 80s has little hope. water barrier)) Run-run, a kilometer to the highway and two along, as suggested by the security guard of the summer cottages where I accidentally went in. Here it is, a shop, 3 by 4 meters and two aunts-sellers in it.

Well, who would have thought! These aunts found an analogue of our filter in an electronic database in 30 seconds, and they had it in stock and they also had a puller! I didn’t even have time to catch my breath) And again, running, running back. We install, remove the fuel from the trough, do not forget to open the faucet, start it - hurrah, it worked!))) But until the 3rd day we rest at anchor. I'm trying to photograph swifts flying over the water, 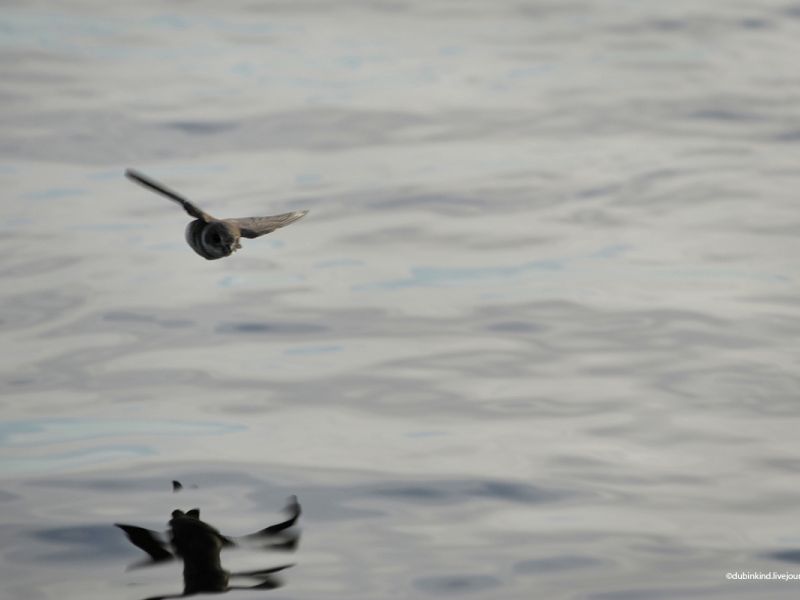 Kolya is trying to fish, 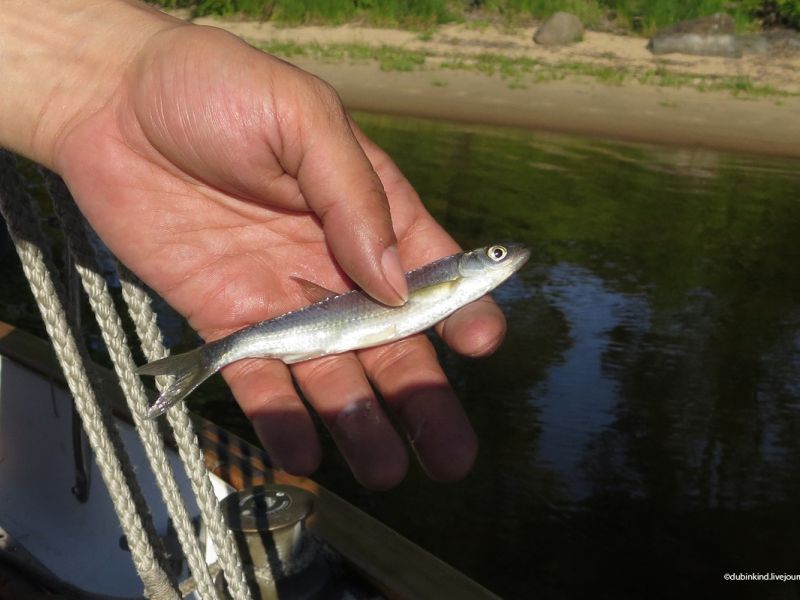 Katya makes dolls. She's good at it, we're not so good)) 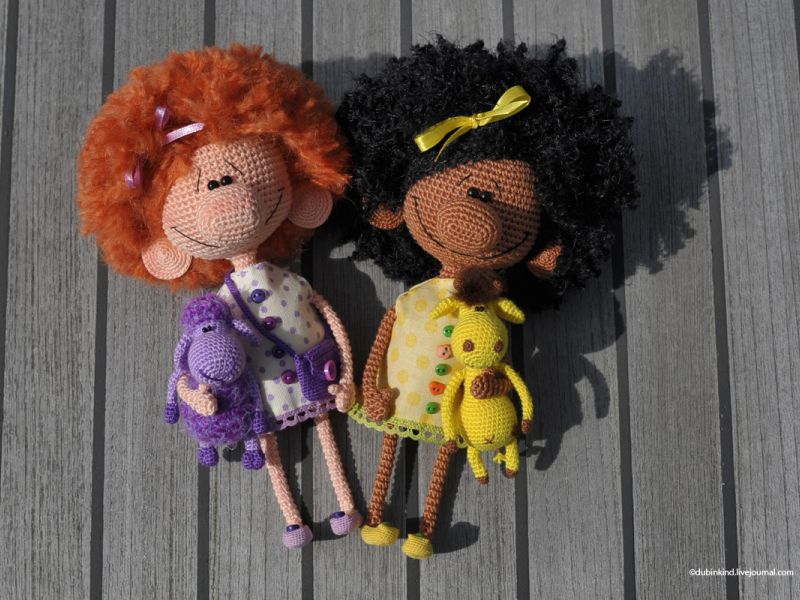 It's great that we broke right here, next to a wonderful shop, and not somewhere in the middle of nowhere!!! Nothing just happens like that. On the third day, when we take off the anchor, we wind the rope around the propeller and lose the small anchor. Rest days have come. Well, we have two more)) We pass the bridge and go to Shlisselburg. The wind is getting stronger. 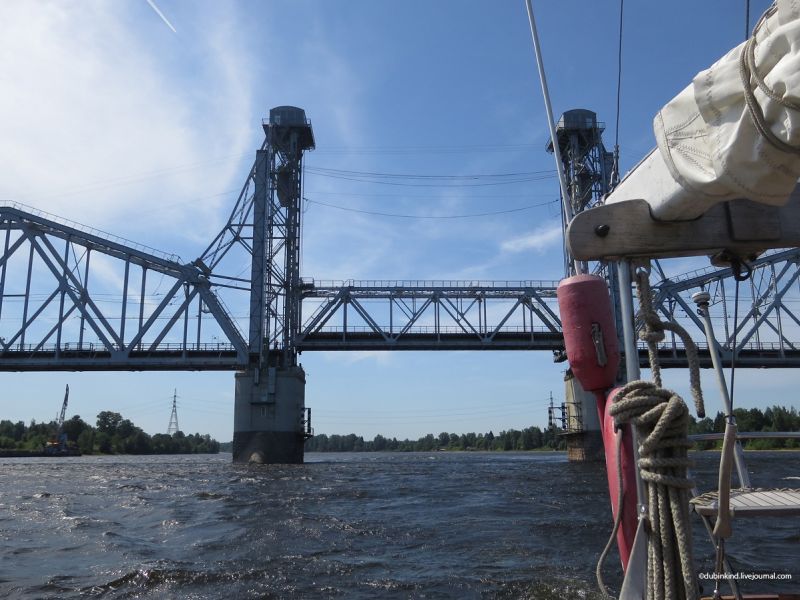 Recently D.A. Medvedev gave the command to develop sailboating in Russia, it wouldn't hurt! For a small fleet, we absolutely do not have enough (in most places there is simply no) infrastructure. Overwhelming the pier and that one is a problem to find. The wind howls in gear, we are looking for parking in Shlisselburg. But she's not here.

We are trying to anchor, but even with two anchors the boat is creeping noticeably. We decide to go behind an artificial spit, to the parking of tugboats and barges, and, lo and behold, we find a quiet corner! 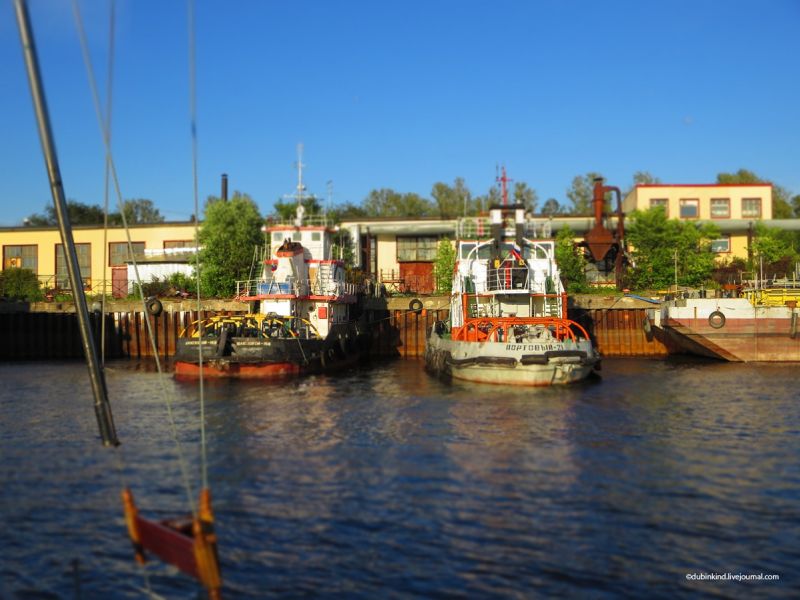 Seagulls nest on the spit, they are not very happy to see us, and we try not to disturb them. They have enough worries without us. 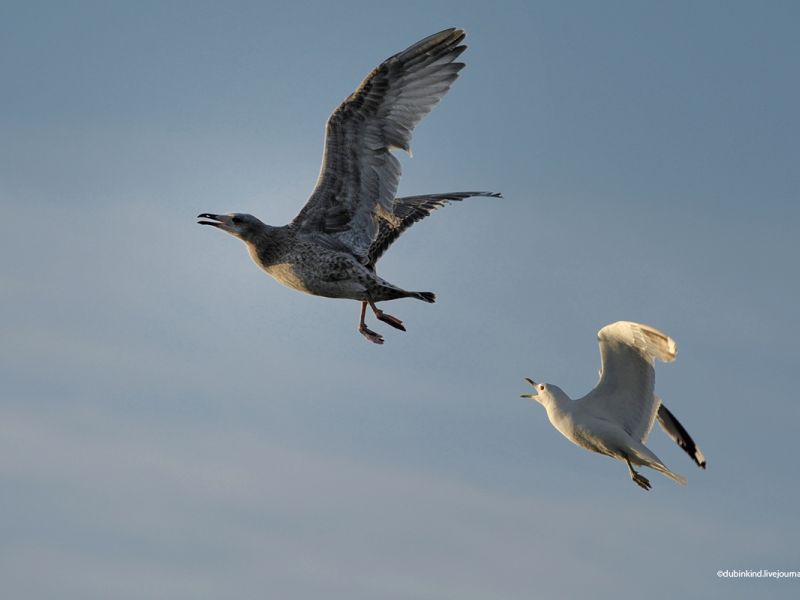 The weather forecast for tomorrow is wind up to 10 knots, easterly, and now it is blowing all 20. We plan to leave for Lake Ladoga at 10 o'clock in the morning.

Morning. It continues to blow, but not as strong as yesterday, we weigh anchor and go past the ancient Oreshek fortress to Lake Ladoga - beauty!!! 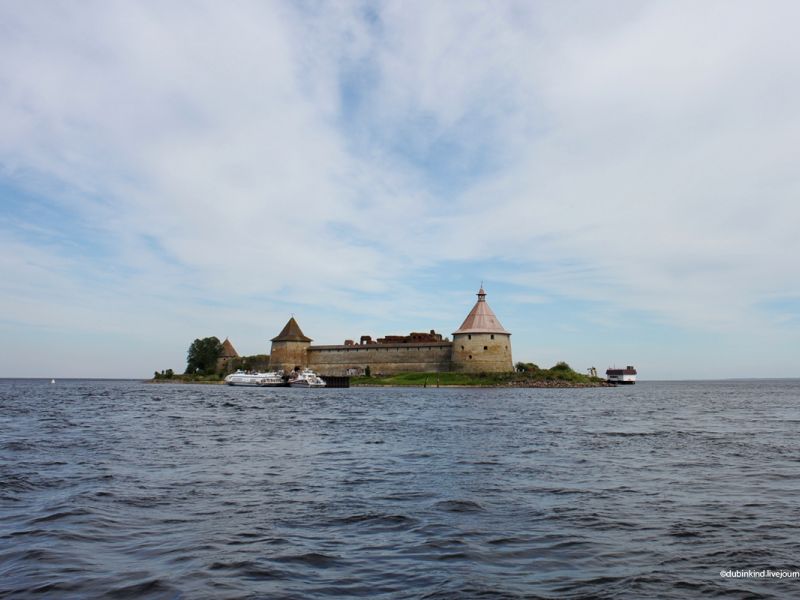 PS Photos of almost all of my wife and brother, I didn’t have it before, to be continued))