Saturday. July 16. Got up at 7am. We were going for quite a long time, because we have nowhere to hurry - to Lysa Gora, where we have to pick up the guys for a maximum of half an hour, and we have not yet received a control call from them. At the beginning of the tenth, without waiting for the call, we begin to slowly pack up and at 9:35 we move away from our parking lot. We go at the slowest speed, at 10 the guys still called back - they are next to the ferry crossing, but you can’t go to the pier there. At 10:20 we pick up Kolya and Sasha from a small beach 200 meters from the ferry. It was not possible to go straight to the shore, and Sasha cameelk to swim to us, and pick up the ace, and then everything went without incident.

Our plan is simple: don't rush. We have three days for a relaxing trip, almost a rest))

During the move, Sasha noticed a bright dot in the water and decided that it was a wobbler, and we needed it. I had to work hard to turn the boat around and find this wobbler. But upon closer inspection, the wobbler turned out to be a cardboard piece of a milk package))

Hot. At one in the afternoon we approach the shore to have lunch (we have never done this before - we ate on the go!). 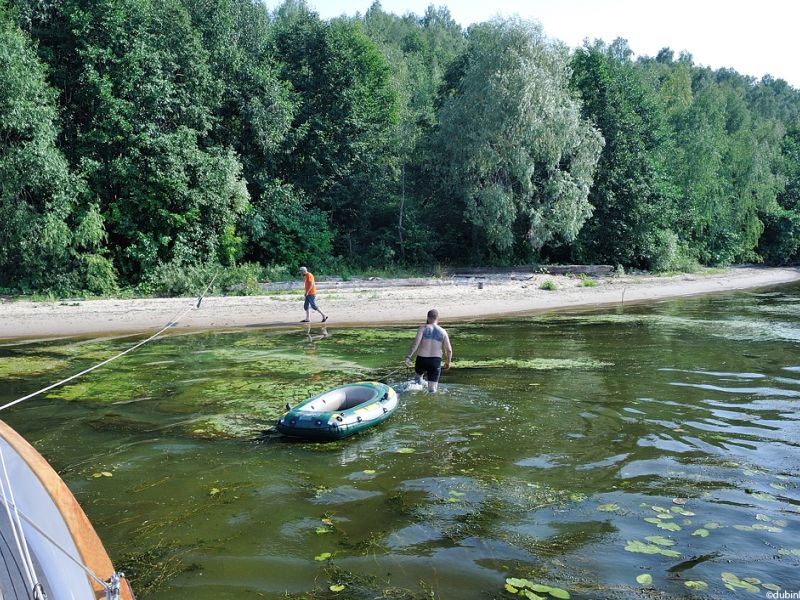 The beach is a little littered, but we manage to find a more or less clean place. As soon as we stretched out the mooring line, a local resident flew up on a motorboat and said that the place was uncomfortable here, the stranded approached the shore, and suggested that we go a little further to the village - it was deeper there. But we stay here, away from the villages and garbage. 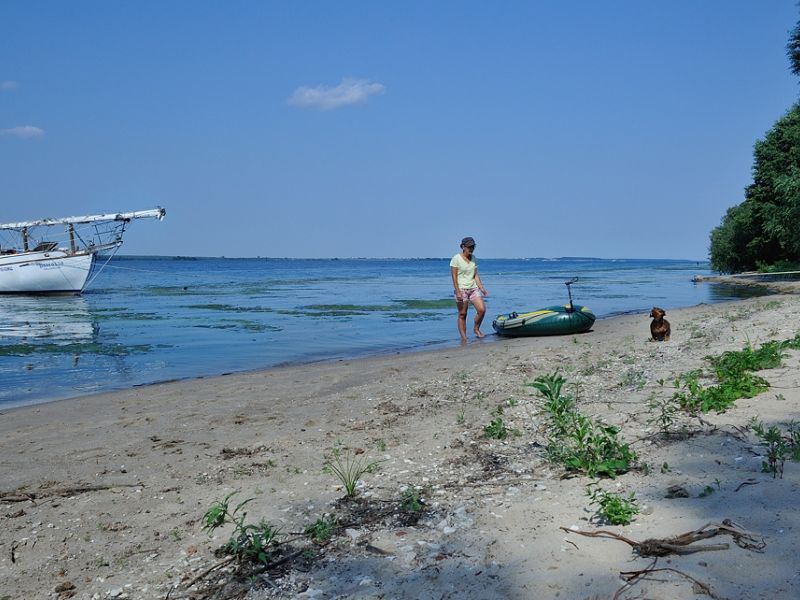 We will spend the night at the mouth of the river. Vetluga, the weather is good, there is no wind. The landmarks are simple - you need to pass a heron on a log on the left, a shallow strip overgrown with grass, and turn behind a red buoy. 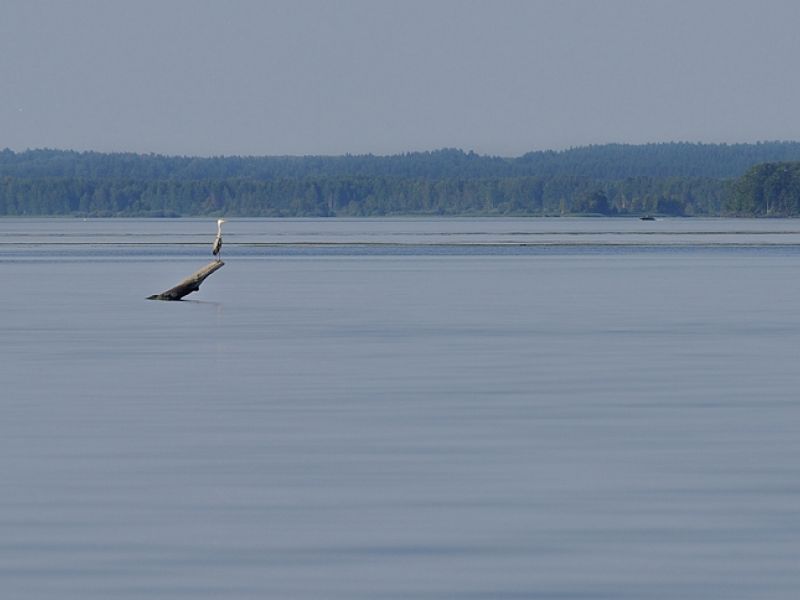 Despite the steep coast and the map, which says that the depths begin literally immediately from the water's edge, we managed to get up only a couple of tens of meters from the coast. For the first time, Fenya climbed into the water on her own and swam a little ... to Kolya, and then perched on him and decided that it was much more convenient to swim this way 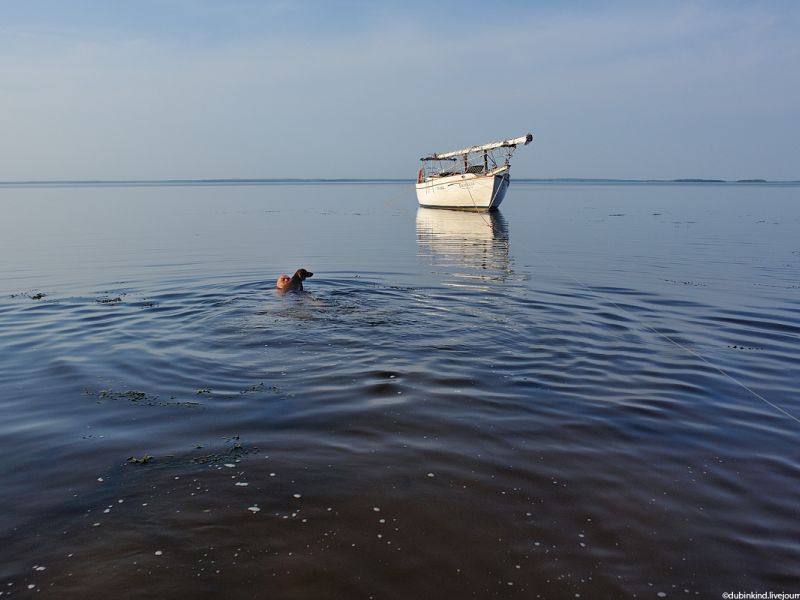 But then she swam on her own, and even hunted for the waves and bit them)) 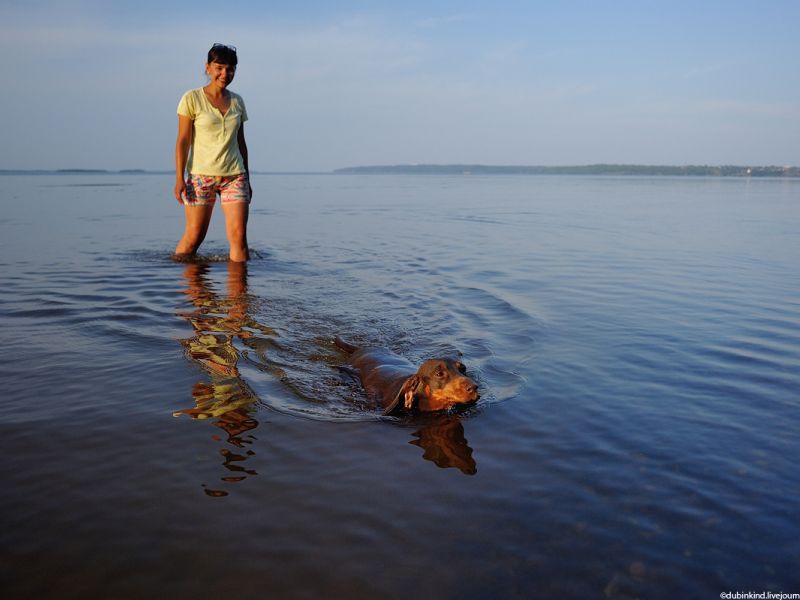 We walked along the shore, and the sun was already starting to set on the horizon. 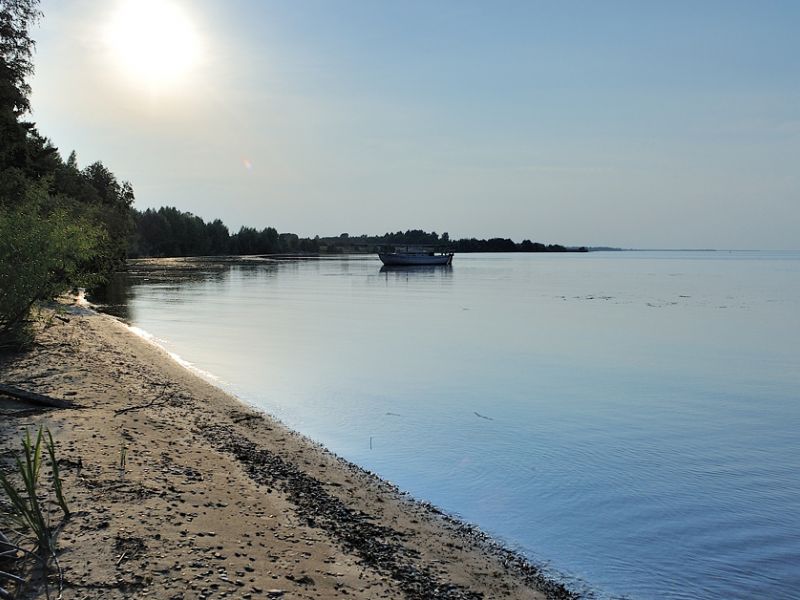 Time to get back on the boat 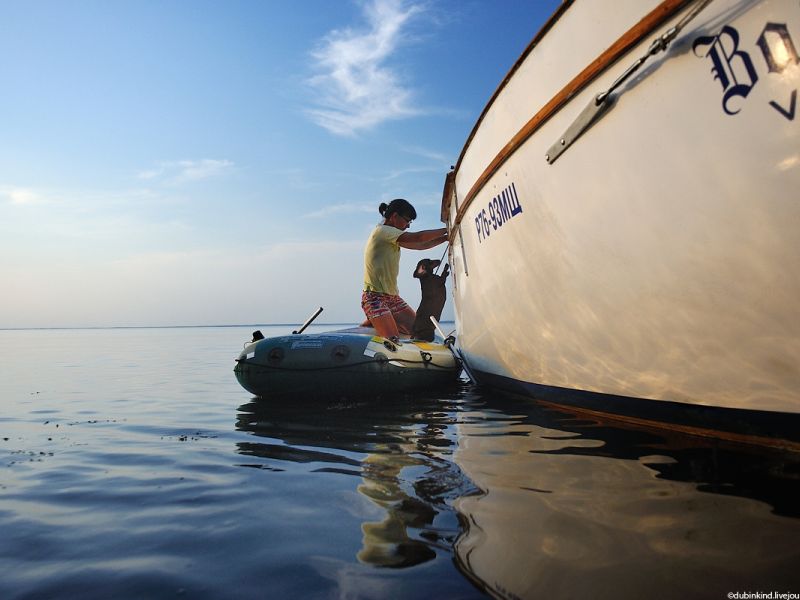 The evening was wonderful! 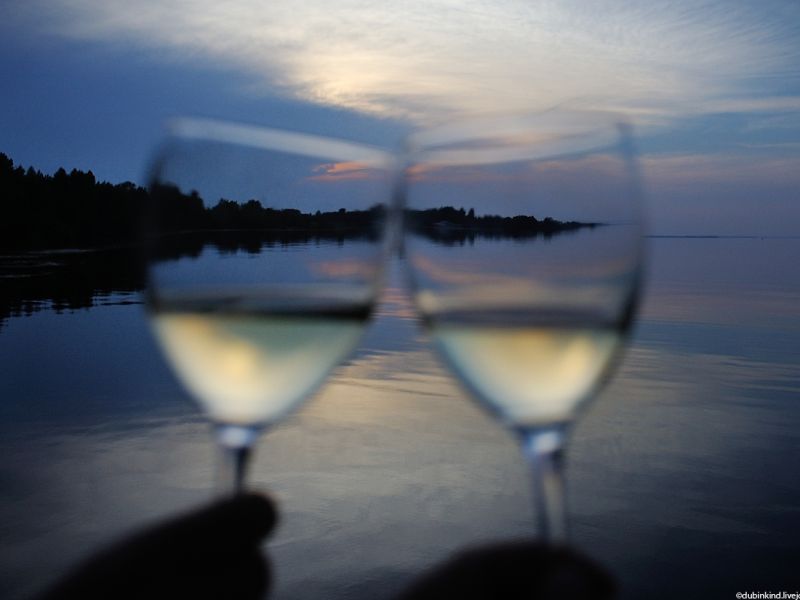 But at night it became terribly stuffy, and at 3:40 in the morning Katya and I could not stand it and weighed anchor - it was still a little easier on the move. Sasha woke up from the sound of the engine and asked to steer. And got used to it pretty quickly. Soon Kolya woke up too.

An hour later, a light breeze blew, and by five in the morning, when we were passing Kozmodemyansk, it had already increased a little. 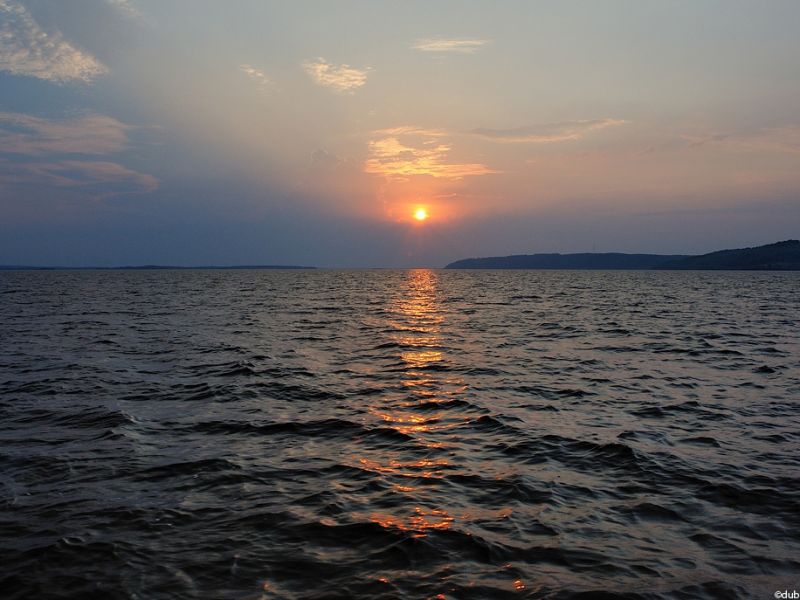 From yesterday's heat, only memories remain. Sasha sat down at the tiller, and did not let him out until the very Cheboksary, and I was glad to have a little rest)) 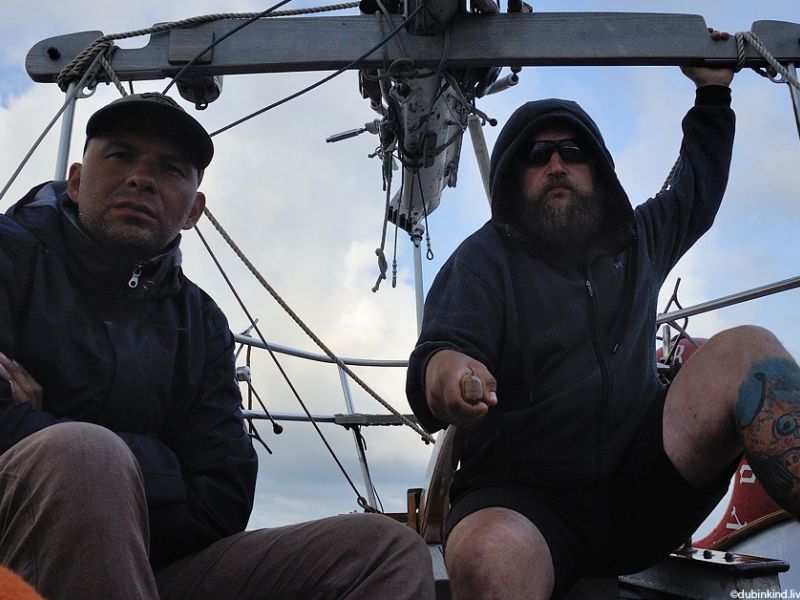 And the breeze continued to grow stronger, and the wave grew noticeably after we entered the wide part of the Cheboksary reservoir. 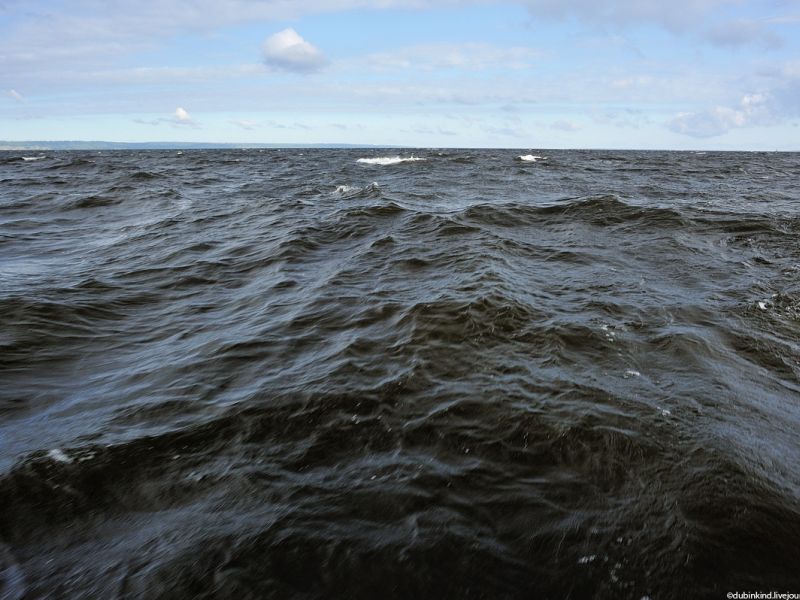 At 10:30 in the morning we were in Cheboksary and boarded the Moscow sailboat "Gloria", returning to the port of seven seas after more than a decade of absence. She slowly went around Europe, and last year she went to the Caspian Sea. I have been waiting for this meeting for a long time - on Gloria I walked several times along the Klyazma reservoir about fifteen years ago)

In the photo I am with Slava, the captain of the Gloria. 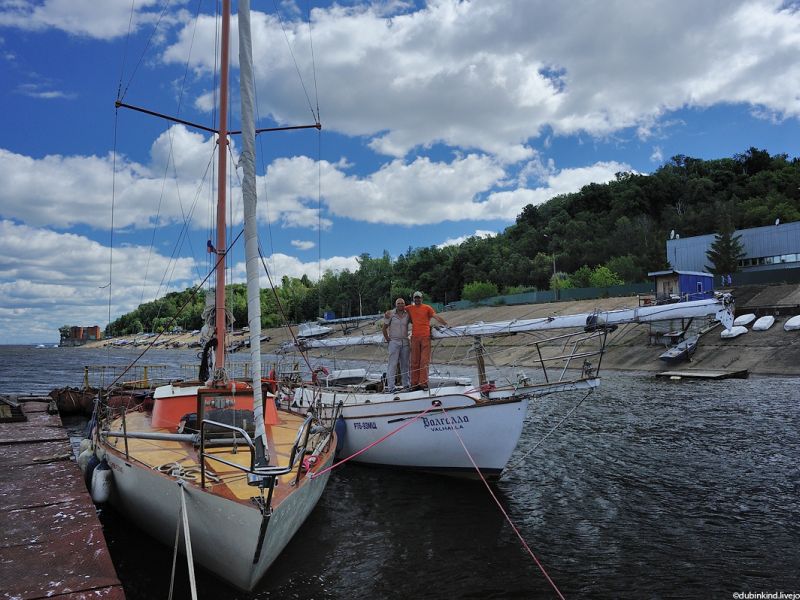 Having agreed on plans, we went to inspect Cheboksary 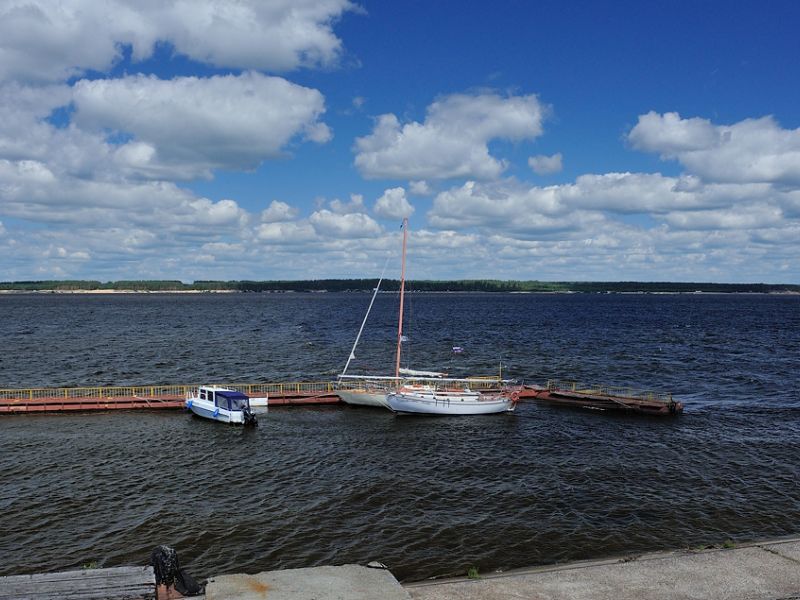