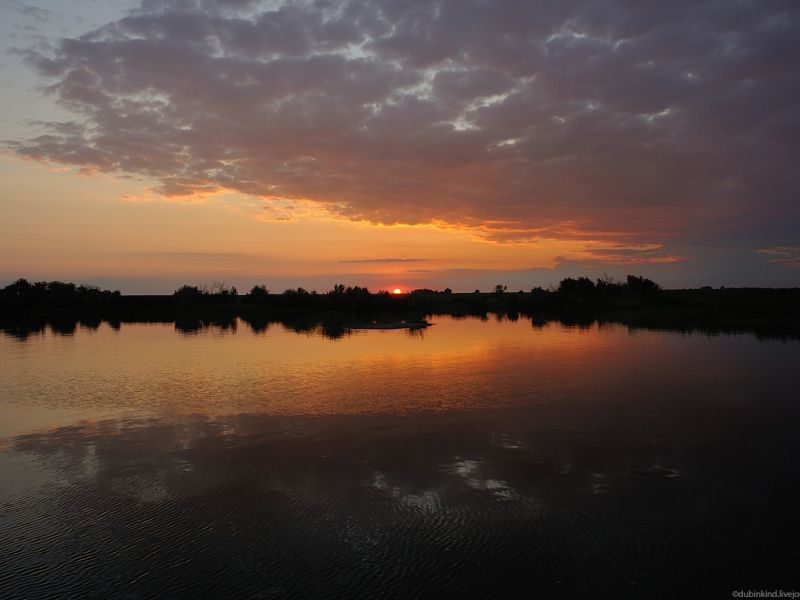 Last sunset on the river. Our journey goes to the sea)))

June 24. Rostov-on-Don. Rain again in the morning. But we must prepare for the exit, nothing can be done. Kolya arrived, and immediately climbed onto the mast to repair the masthead fire. Sasha washed the dinghy and the deck, the guys did something else, I just had to complete the formalities - how good it is with the team! 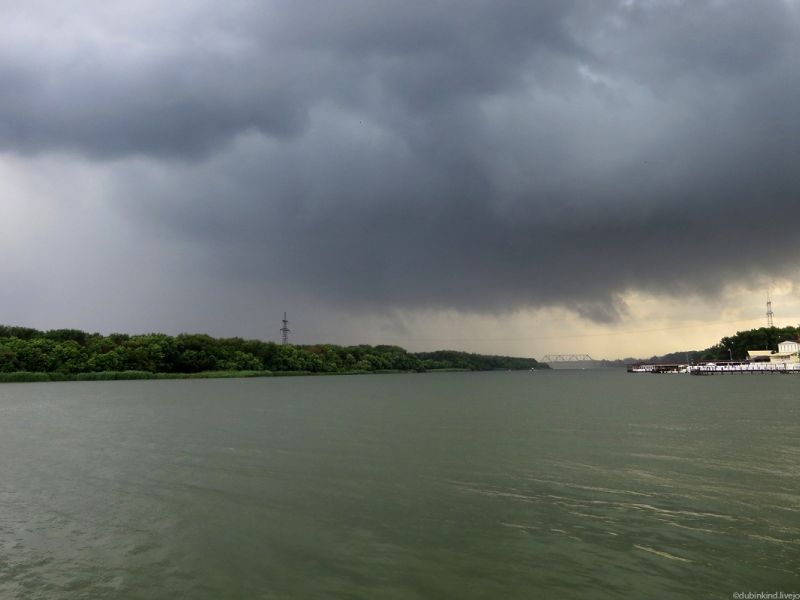 View from our mast to the "sailboat club" High Coast. I felt a little out of my element when I took Fenya out for a walk)) 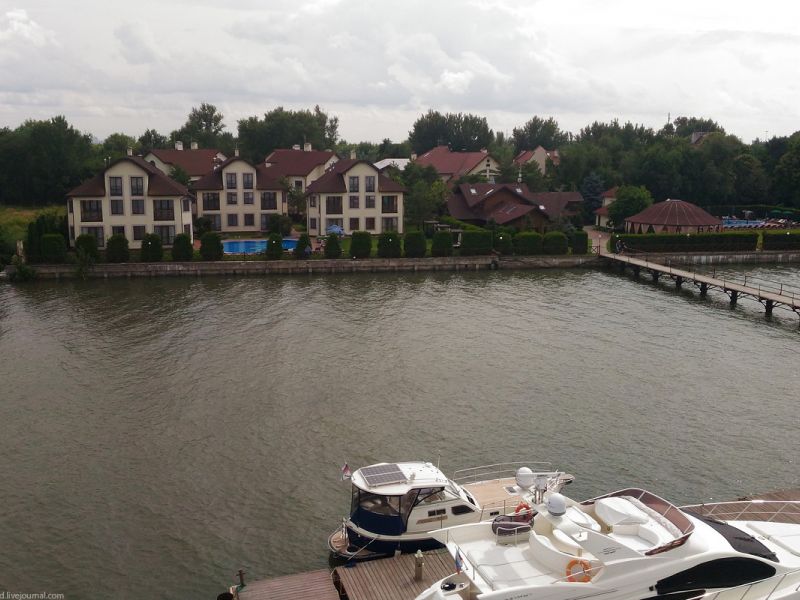 We poured full tanks of water. The guys drove to the supermarket. We should have enough to drink and eat before Kerch)) 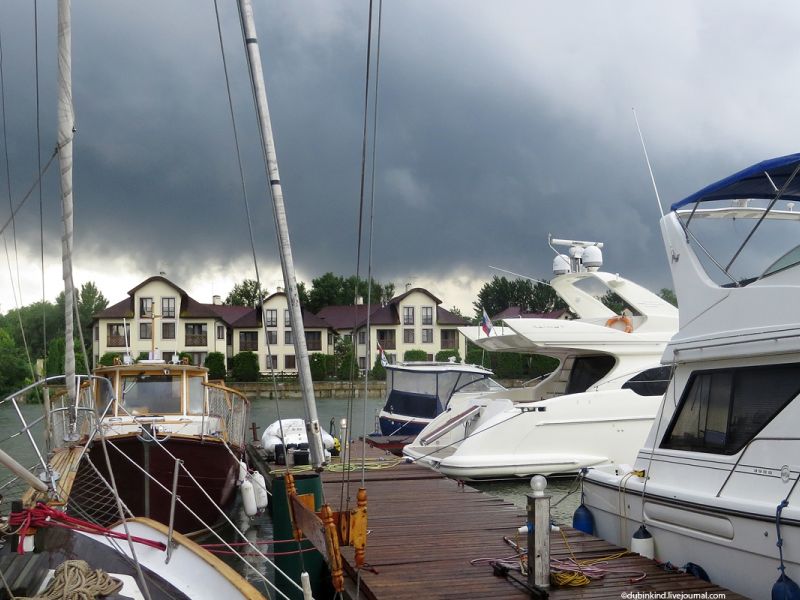 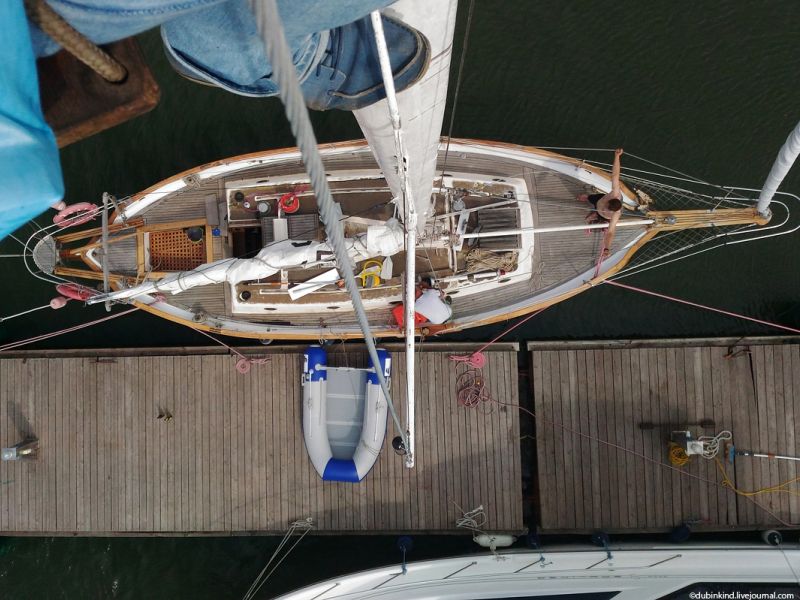 I installed the antenna of our marine radio station and fixed something else. Local sailboatsmen advised us to take an agent to arrange access to the sea and pass under the last drawbridge. Everything was done quickly and in words simply, but then I regretted this simplification many times. If for the first time, like us, you are going to go on a small boat in our border waters and do not have any experience in such matters, it is better to go to the border guards yourself, say that you are a teapot and request full instructions for any moment you do not understand. Well, more on that later. Headtra at 10 am we should be at the bridge near the hotel "Anchor", and wait for the bridge to be raised. 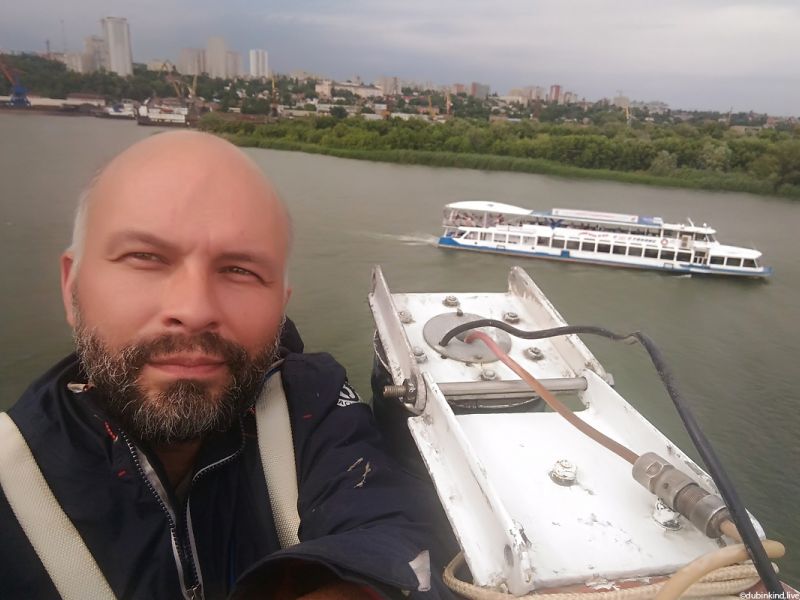 June 25th. Out of habit, I tried to contact the controllers on the river hand radio station. Nothing happened and I turned on our stationary marine station, the antenna of which Kolya screwed yesterday, on channel 16 and immediately heard the dispatcher calling us. The audibility was excellent and I, talking to the dispatcher, smiled stupidly. It’s good that no one saw me))) The dispatcher said that we were the first to go into the arch of the bridge, as soon as it starts to rise, and healthy ships will follow us) It’s a 10-minute walk to the bridge and we untie the seam in advance, half an hourtovy and trying to move away from the pier. But no. The current on the Don is so strong, and the pier of the sailboat club is located so poorly that we are pressed tightly against it. A few people help push our nose, I give gas, but we are again pressed to the pier, I give more gas, we move away and ... run aground! and so thoroughly, we don’t even stagger!))) I immediately had a plan that we should drag the bow towards the pier, but the locals say that we need to drag the stern, otherwise we won’t get off. They probably know better. We start the mooring lines on the pier, pull the winches and still cling to the local boatgrater, but nothing ... In the end, we hook the cable to the bow and after three minutes of effort we get aground, cheers, forward to the bridge, towards adventure)))) We were in no hurry, anyway, we had to wait half an hour for the wiring) And the Anchor hotels "You won't find it on the maps. It turns out that this local name was given to the building for its peculiar shape. And I was looking!))) 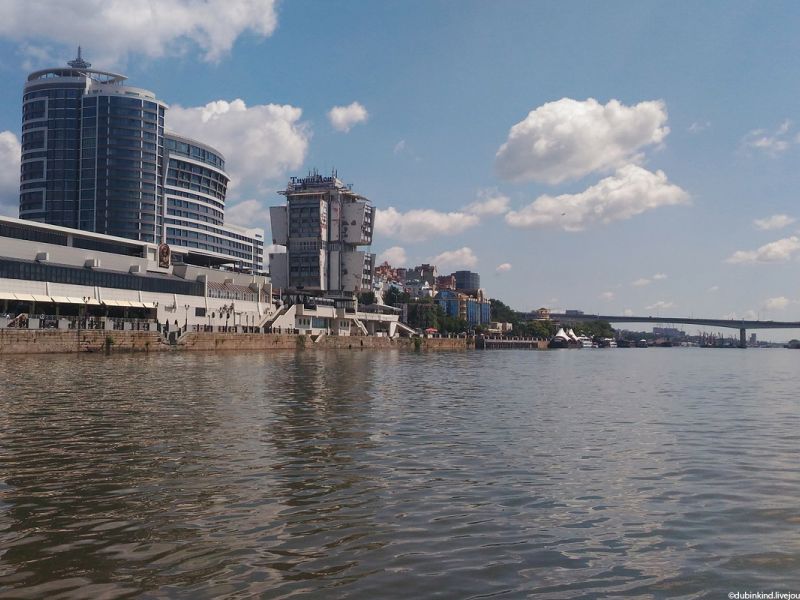 The bridge has been crossed, we are still the first, but a caravan is approaching from behind, and after all the ships pass from our side, a caravan will also go towards us. 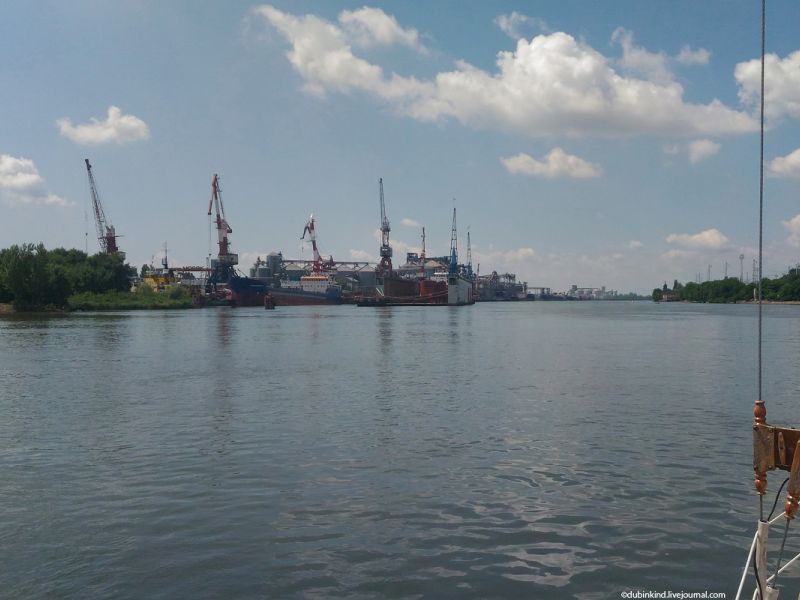 We press close to the edge of the ship's passage so as not to interfere with large ships, and soon the first of them overtake us, and the oncoming lane is no longer empty. 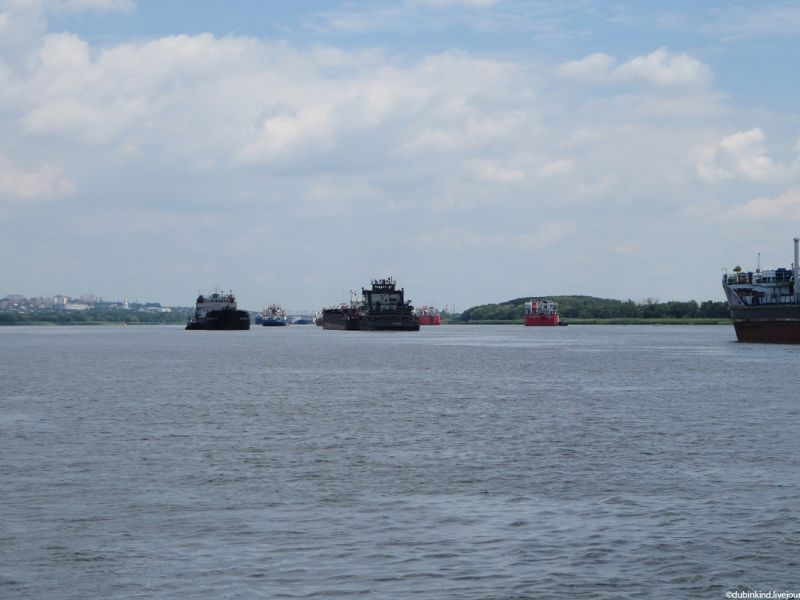 That's where I probably would not want to be on a sailboat again, so it's in Rostov during the construction of the railway bridge) 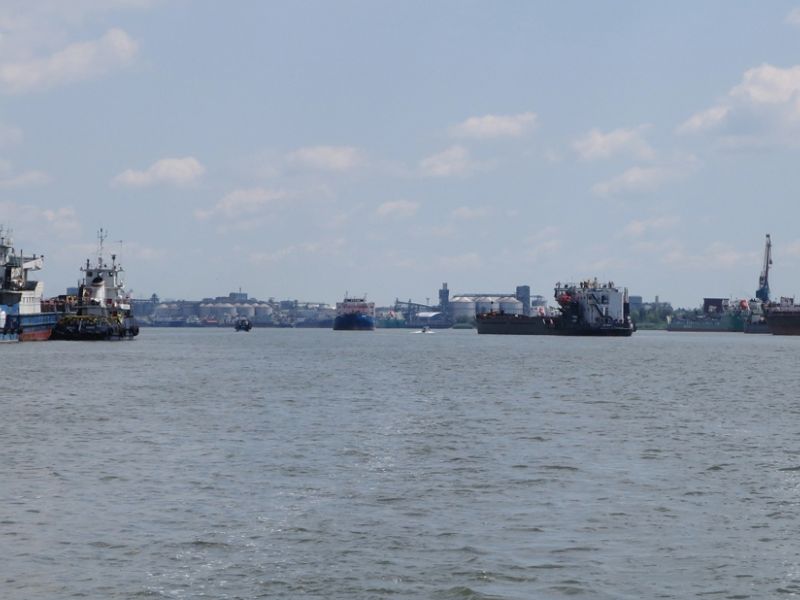 We approach the last river bridge. 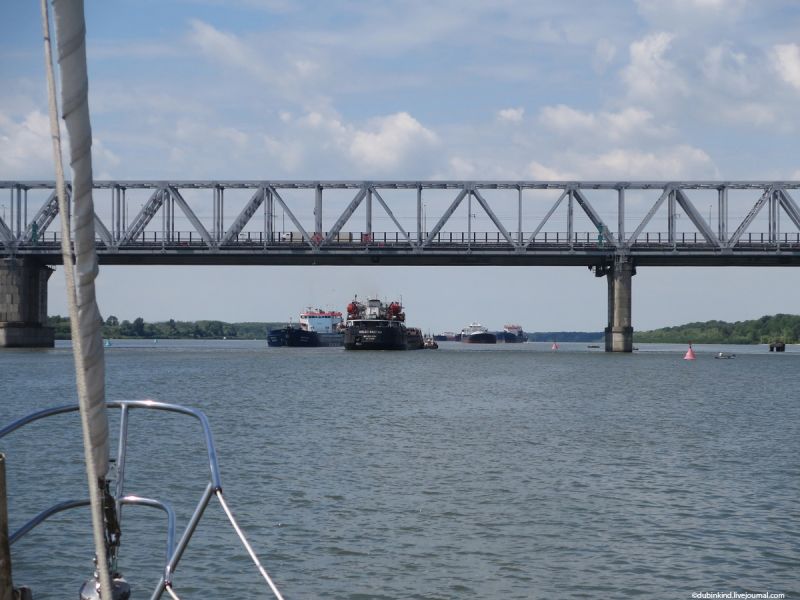 Quite quickly, the cork melted and now we are already walking alone along the river. At 14:45 we approached Azov, where we planned to land and refuel. But there is no place in Azov, the pier is dotted with fishermen with donks, not paying attention to the sailboat trying to land. I was afraid to get too close to them, so as not to wrap gear around the screw. You can’t stick to other places - a customs zone, or something like that. From the moored ship we were advised to go a little further. Nothing further turned up. But we met an anchored local sailboat, from which we were told that we should return to the embankment with the fishermen - there is no other place to moor in Azov. We returned and ran aground almost opposite the fishermen))) Very successful, I think. They launched a dinghy, first they brought in an anchor, then Sasha buried with canisters on the shore. Actually, running aground twice in a day is a record. For the entire journey from St. Petersburg, we landed only three times, and a couple of times the keel touched the bottom. And then two landings in a day - a good start!))) While Sasha was driving to a gas station, we dragged the sailboat from the shoal by the previously delivered anchor, and began to wait. K pA local motorboat approached the richhal with the fishermen, she, like us, did not find a place, the fishermen did not pay attention to her. Then the motorboat turned around, moved away from the shore and with acceleration went to the pier, near the shore gave a reverse and stopped in a surf of water a meter from the shore. The fishermen were blown away by the wind. So here's how it's customary to moor here, we'll know))) 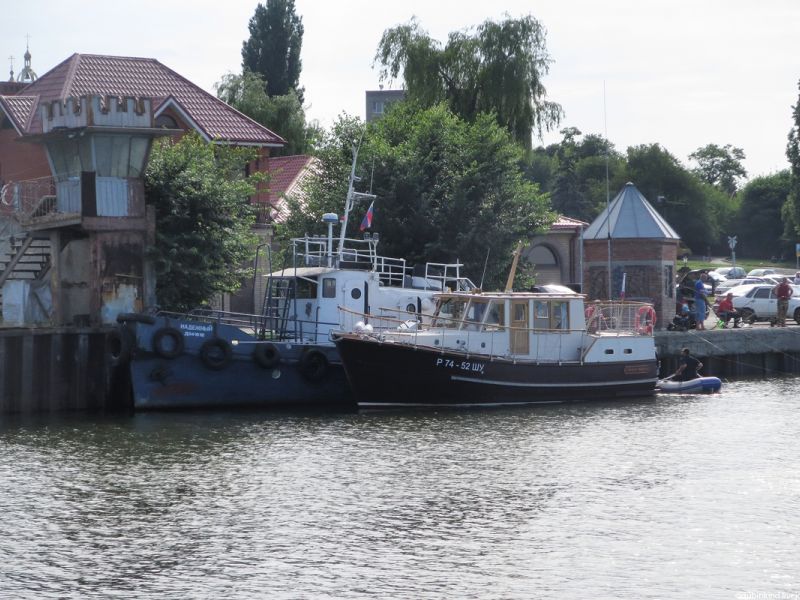 At 16:30 Sasha brought fuel, and we continued on our way 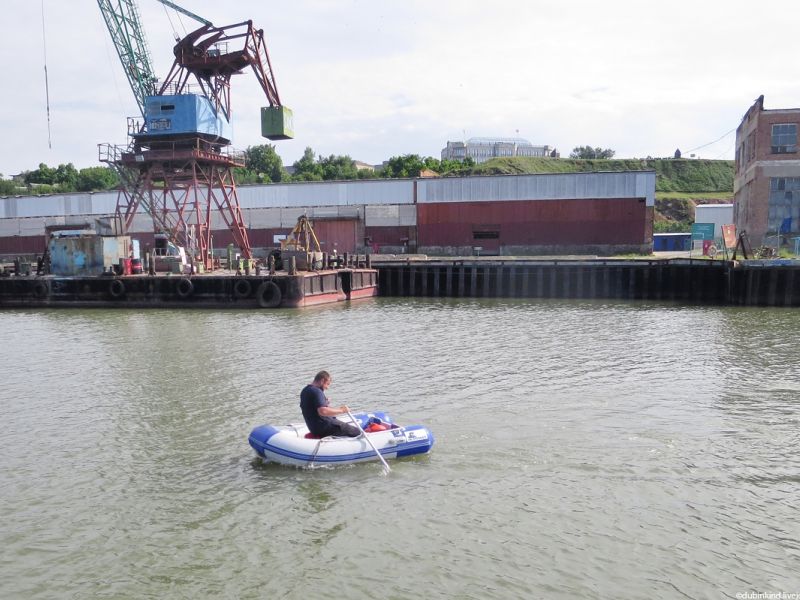 At 18:15 I contacted the border guards and we were ordered not to go any further. And then there was nowhere, only about 5 km remained to the Sea of u200bu200bAzov. We anchored 2 at the mouth of the Don. In addition to us, there were fishermen and resting seagulls. 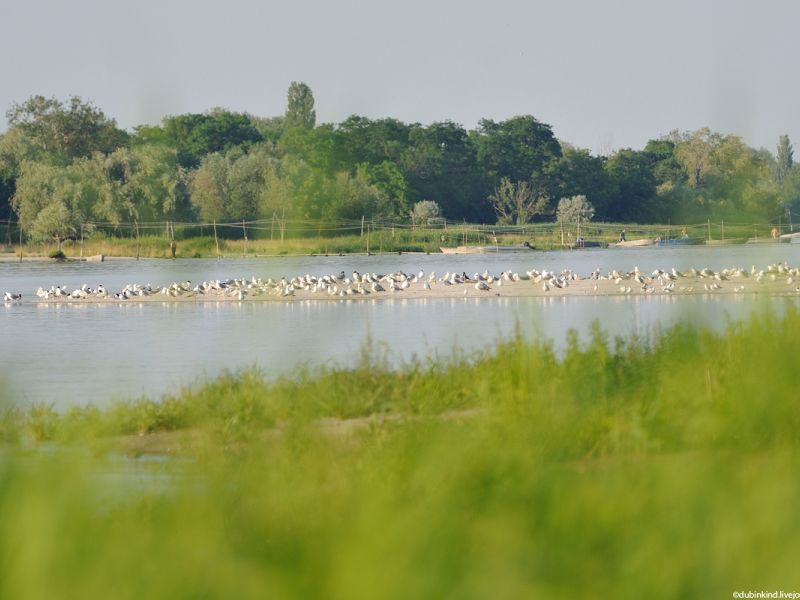 Well, I, Katya and Fenya, buried ashore to rest. 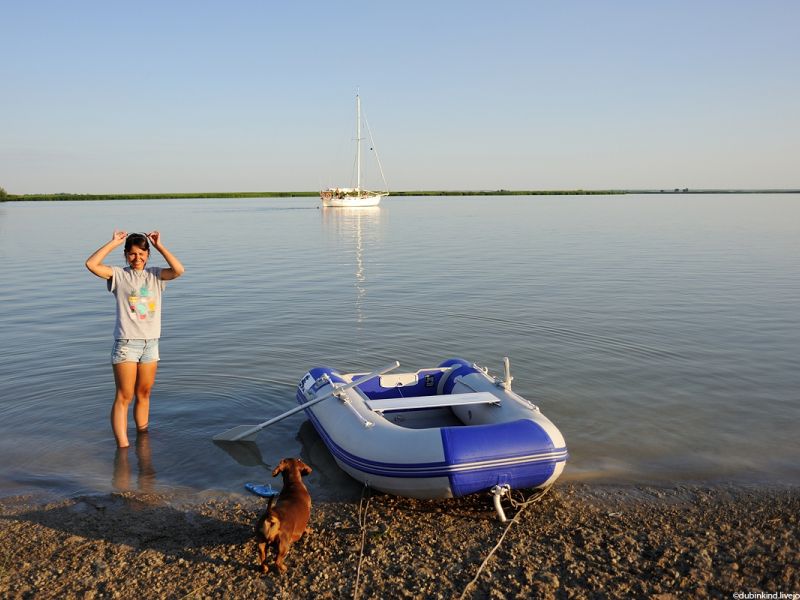 And the guys began to jump from the sailboat into the water. 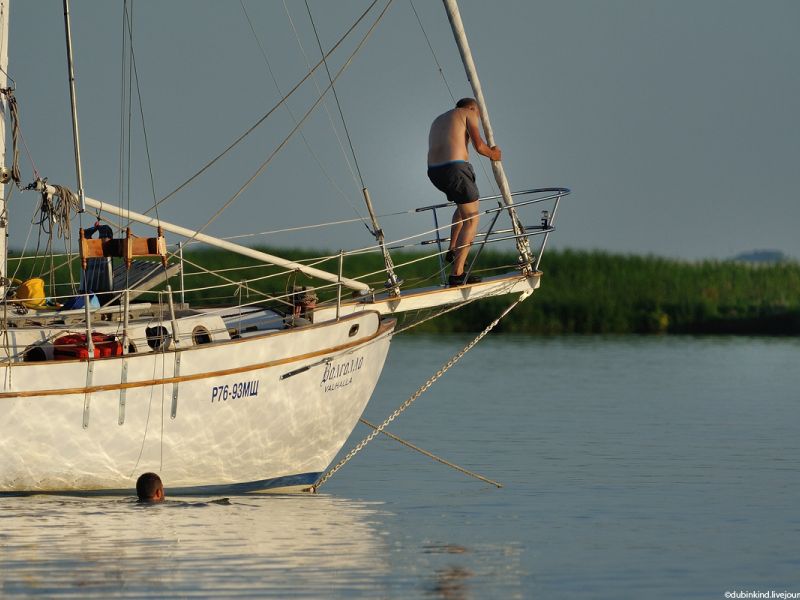 That's what happens when two healthy men break out of the office into the open!)))) Like children, by God))))) 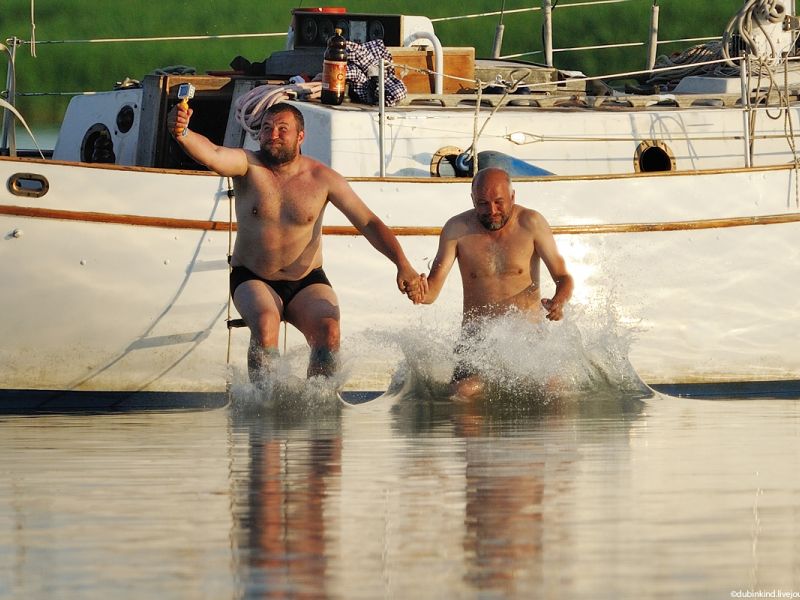 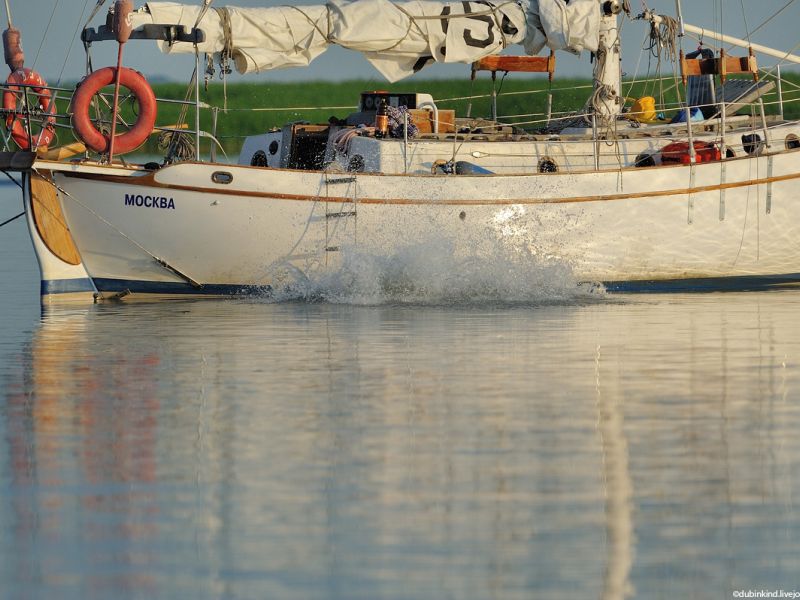 Fenya, on the contrary, decided to sail on a sailboat on her own, and maybe even to the sea, who knows, she doesn’t always tell us about her decisions like that) 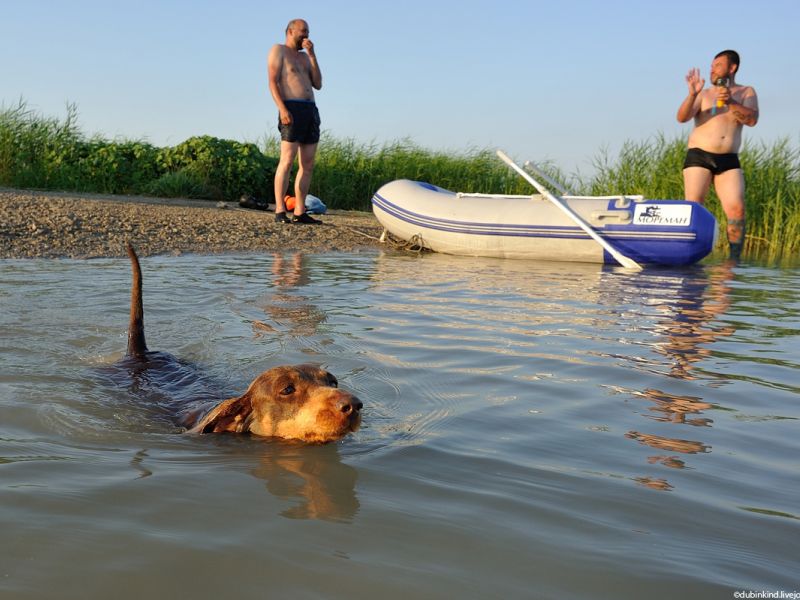 But Katya was stopped and returned to land. Decent dogs should swim on a sailboat in a boat, that's why it's called a dinghy))))) 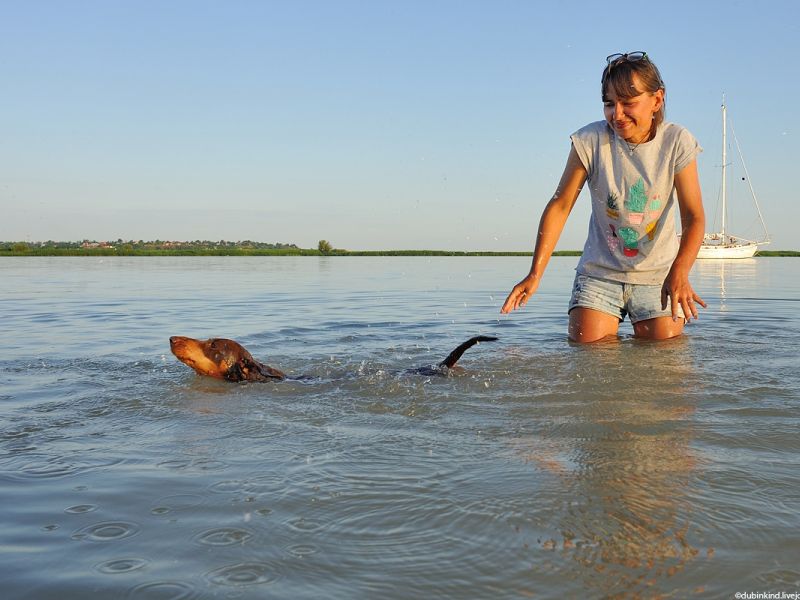 And decent dogs should also help the captain get on board 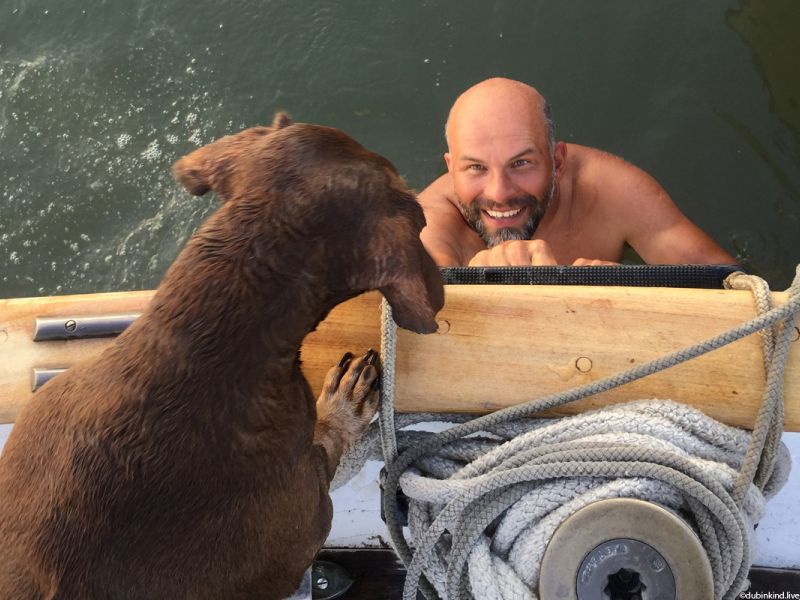 Soon the sun went down and our last night on the river began. 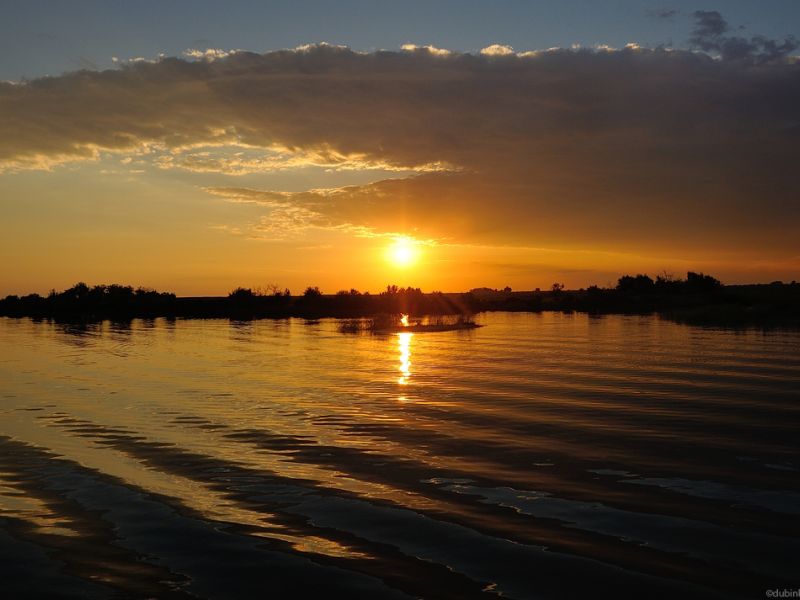 On June 26, at 4:50 am, we weighed anchor, and half an hour later, leaving the last piece of land on the starboard side, we entered the Sea of Azov.) 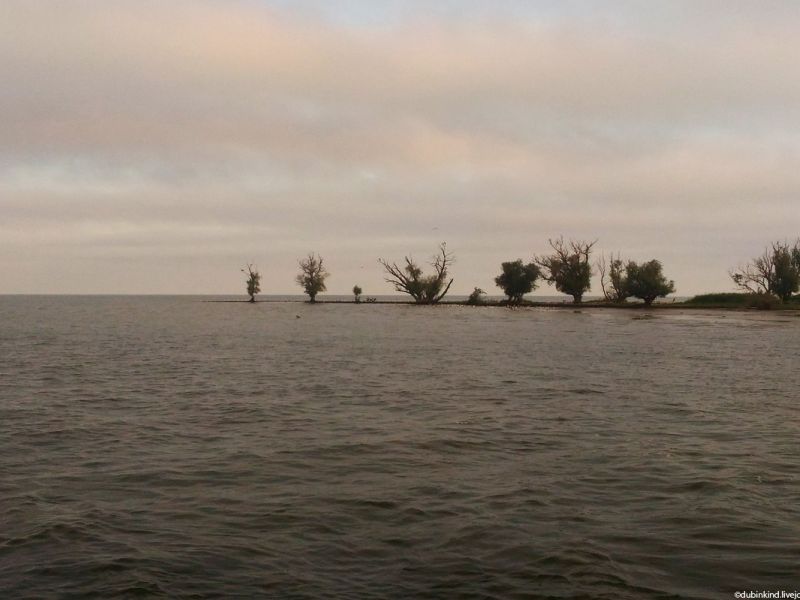 Behind were three sail seasons, almost 6 thousand. km and many impressions. I was a little sad, although one of my wishes came true - to independently cross our entire country from north to south along waterways. Well, okay, now the long-awaited sea part of the adventure begins!)