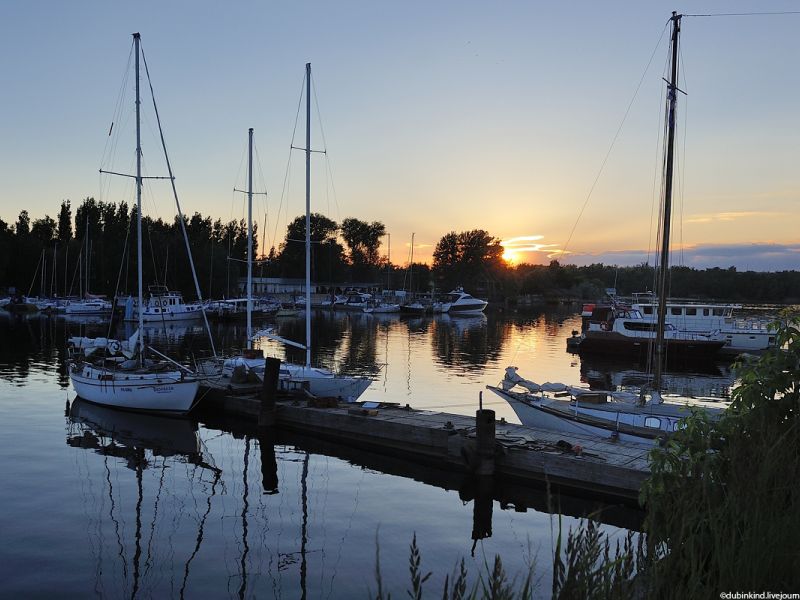 The next stage of our journey is over, a little more than a thousand nautical miles are left astern, or a couple of thousand kilometers, as you like. The route "from the Varangians to the Greeks" was successfully completed. Speed record set. Negative of course - from St. Petersburg to the Crimea, as far as I know, no one has gone for three years yet)))) I was incredibly tired this time, but still I’ll start writing a ship’s log, I haven’t gone anywhere else where there is no Internet)) ))

I'll start from the very beginning. A couple of days before leaving for the boat, an automatic transmission oil cooling pipe came off my car, and although the replacement part was cheap, it was not available, it took a week to order. Well, do not wait a week, especially since we also wanted to stop by for a couple of days on the way to the village. I took my brother's car and we set off. And before reaching about 60 km to the village, we felt strange vibrations, and then sickly blows on the bottom. The rear propeller shaft fell off. But this won’t stop us, yes, I broke so many of these cardans, yes, I turn them into an arc with my bare hands))) In short, I disconnected the rear cardan, connected the four-wheel drive in the razdatka, and we drove on. We rested in the village for a couple of days: well, how we rested - they repaired 200 meters of the fence, a change of work - this is the best rest! The cardan crosspiece also turned out to be cunning and inaccessible, so we moved to Saratov in the same front-wheel drive version. When there were about 100 km left to the boat, the front wheel couplings rattled, which is probably not surprising, despite the fact that the car is designed for constant driving on the rear wheel drive. But somehow they pulled through. 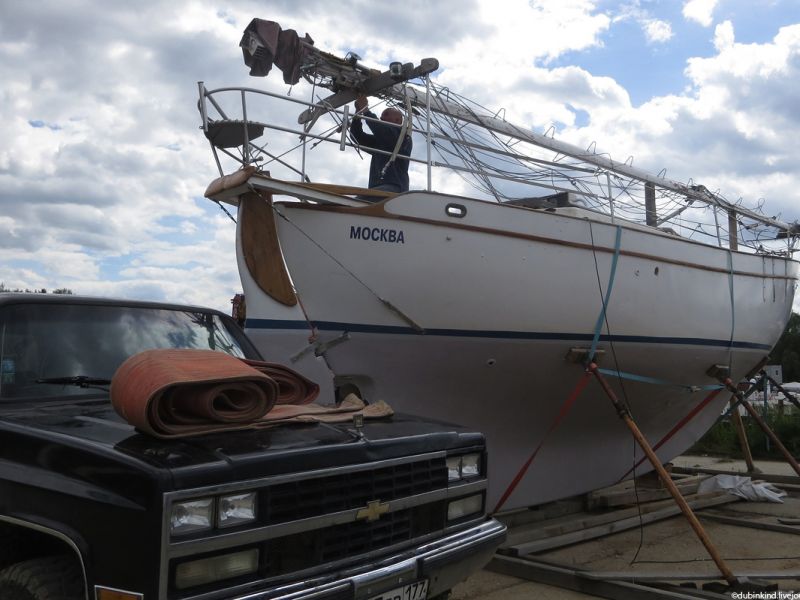 We arrived at the boat and now let's do repairs on it, tint something, cover the bottom with antifouling, throw off, 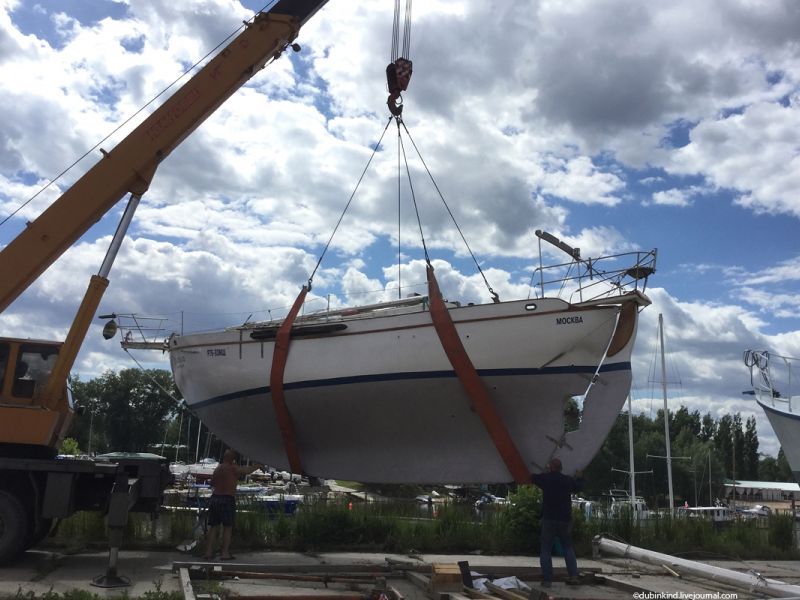 put up the mast 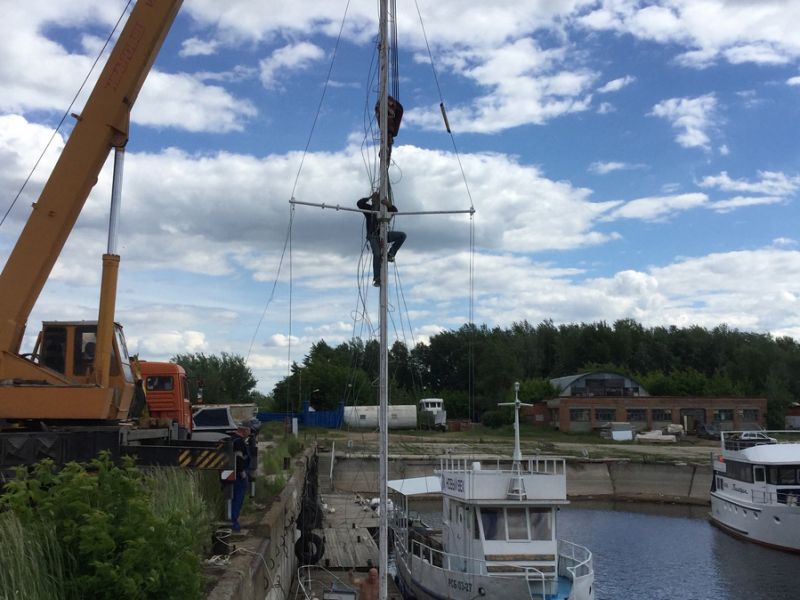 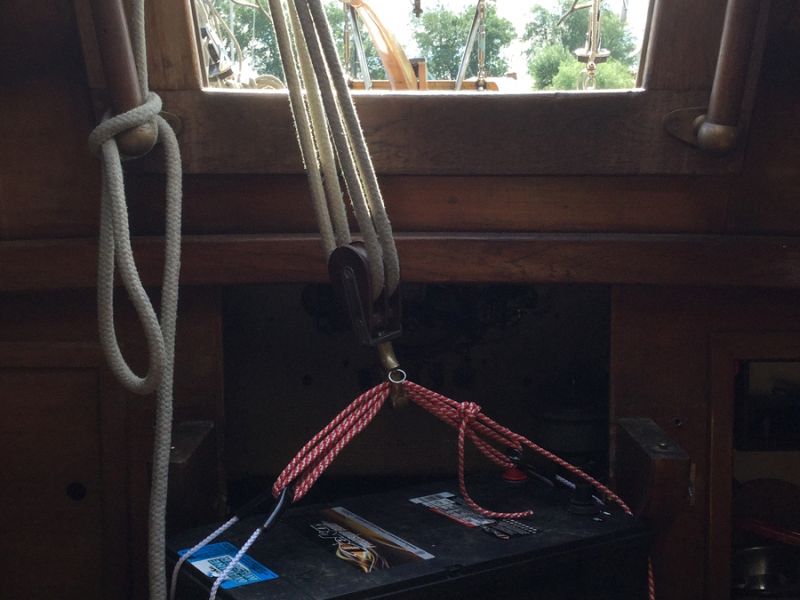 well, and other little things) The local sailboatsman Sergey helped us a lot, he knows how and knows everything, and what a delicious moonshine he drives, mmm!)) and Katya, meanwhile, feeds local dogs, well, she won’t miss a single one) 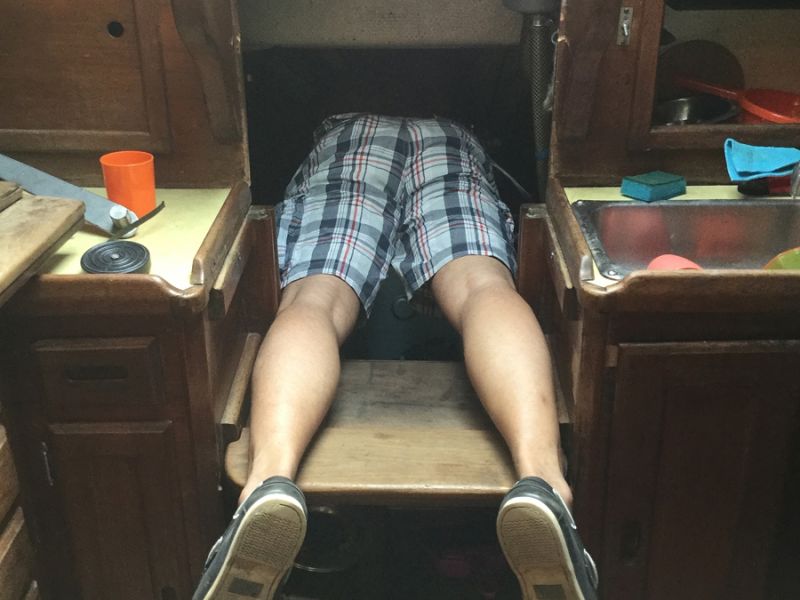 But here, on the morning of June 8, having filled a full tank and two canisters, we moved away from the pier of the sailboat club. Nobody followed us. We left the creek into the Volga and walked about 3 km under the motor, there was no wind.

And then (7:15) it seemed to me that a gap appeared in the uniform sound of the engine, then another and another. Increasingly, and now we hang out in silence on smooth water. The engine does not start. They deployed the staysail, and catching the slightest breath of the breeze headed back against the current. At 8 in the morning I tried to set up the mainsail as well, but it began to interfere with the staysail, and we removed it. At 9:15 it blew a little and at 10:20 we moored in the same place where we left 4 hours ago 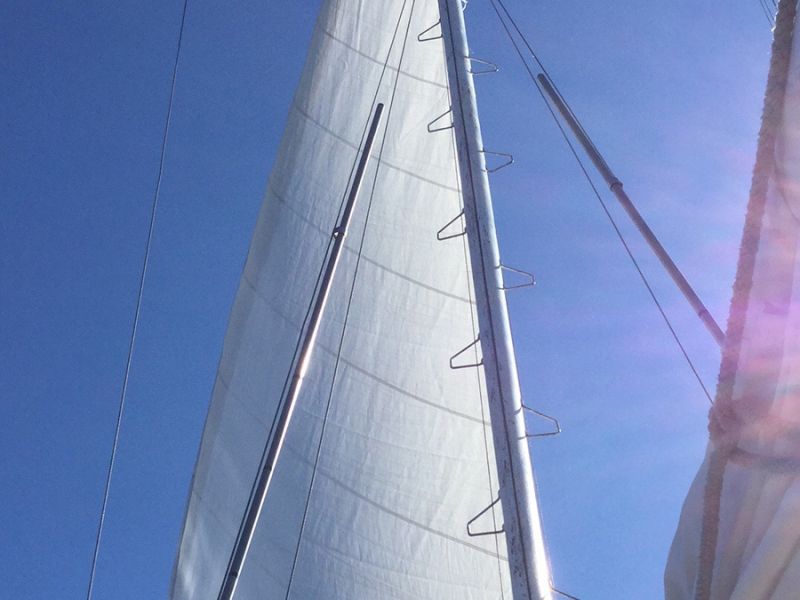 On June 9-10 we are repairing. We change all filters, pump air from the system, change oils and sort out the starter. Kolya came to pick up the car. Brought a cunning cross. We fix the cardan at the same time and put it in place.

On June 11 we again depart from the pier. We are escorted (from left to right) Sergey, Alexander

at266 and my brother Kolya. And from the bushes on the shore, local dogs also look sadly)) 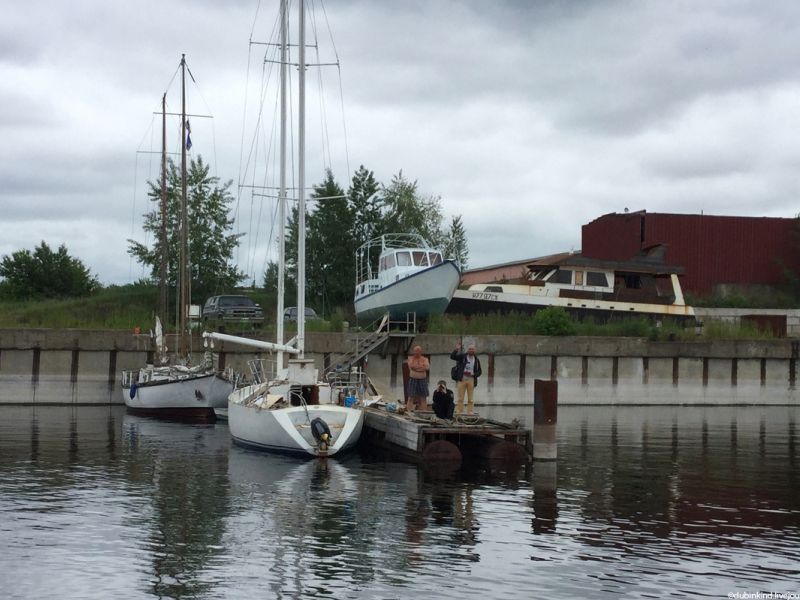 It is cool, damp, sometimes it drizzles, we pass the Uvek bridge. The water is low now and it does not cause problems, but last year we could not pass it with our almost 15m mast. 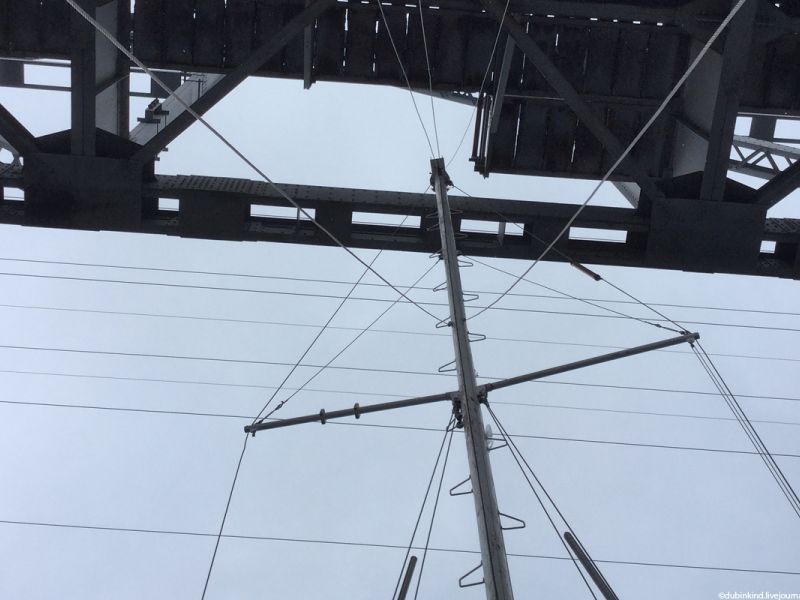 Traveling should be a pleasure, it is clear that I am jubilant, anticipating the upcoming adventures!))) 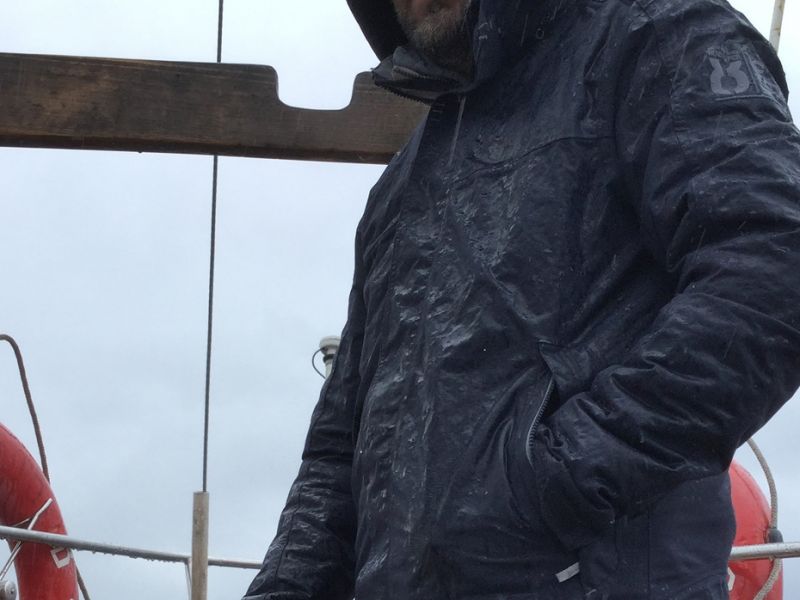 We were going to go very close on the first day, to the refuge of Mordov, but because of the low water it turned out to be uncomfortable there and we go a little further, to Akhmat.

Arrived. It would be nice not to stand up to this dumb wall, on which I barely, not the first time, climbed, but on the contrary, in a beautiful bay, but there is no anchor sign. 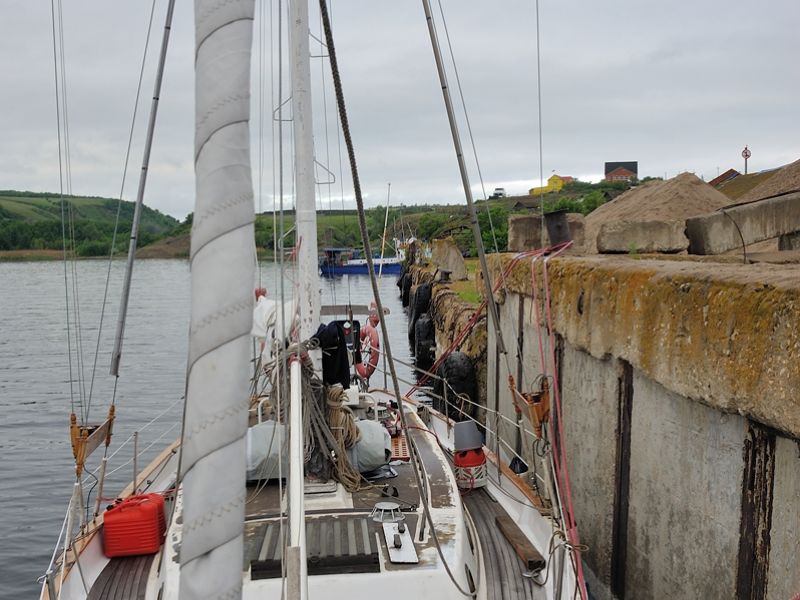