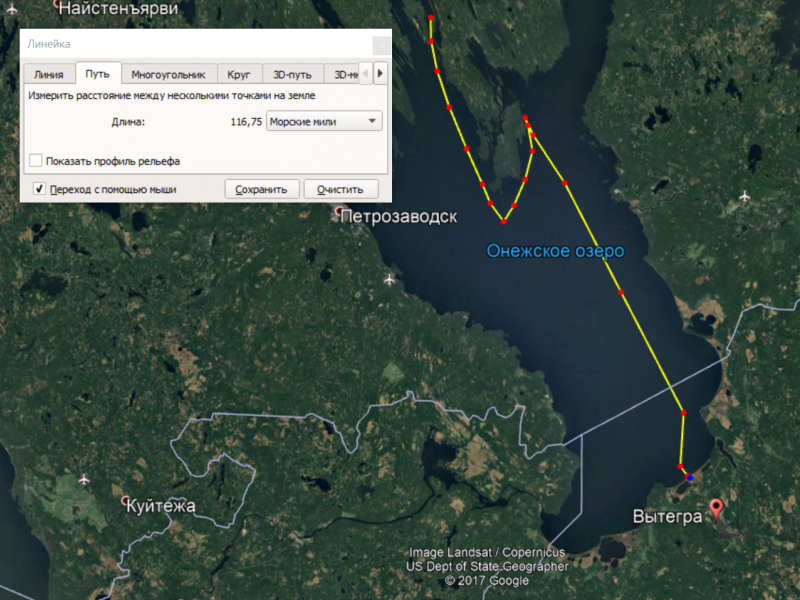 We left Suisari early in the morning and, since the wind was fair, by lunchtime we entered the Unitskaya Bay ...

The further north we went, the higher and more beautiful the shores became. 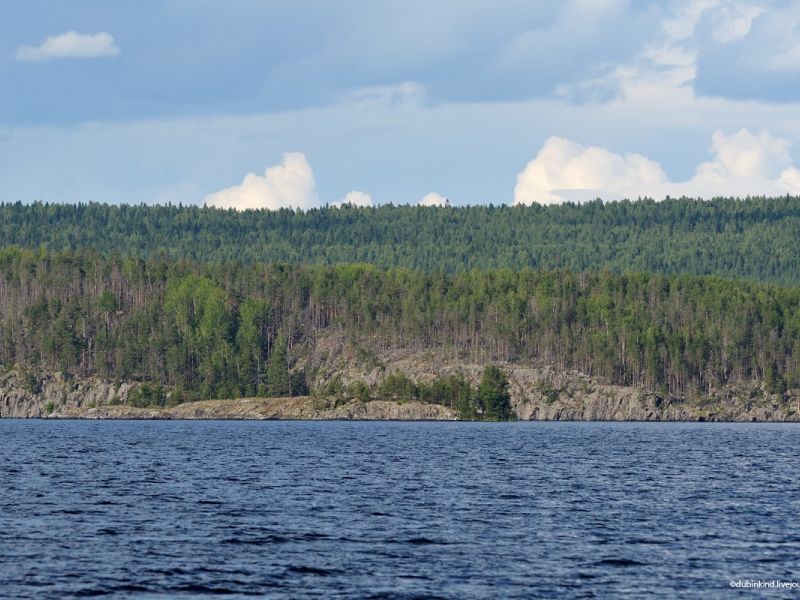 I was ready to land and explore every island, but we had a goal - 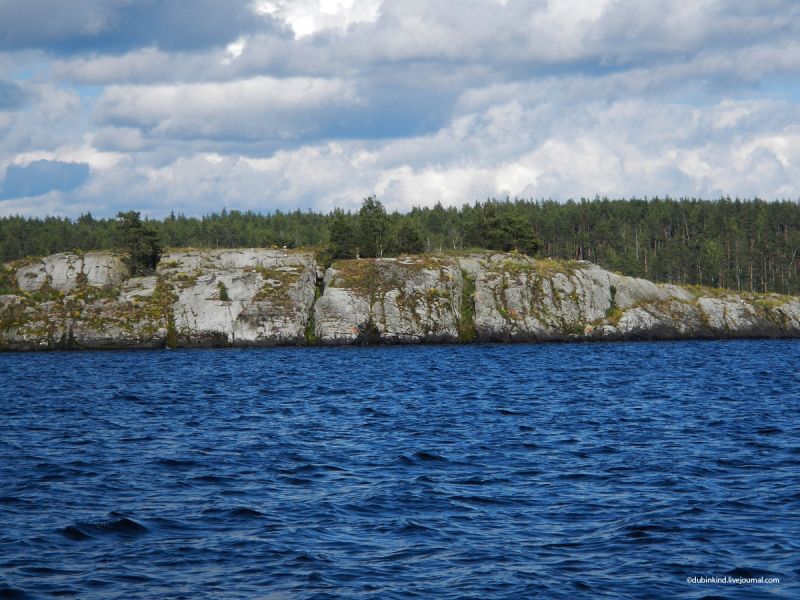 - a small nameless rocky cove on the northern tip of the island of Mizh, which we entered at half past six in the evening 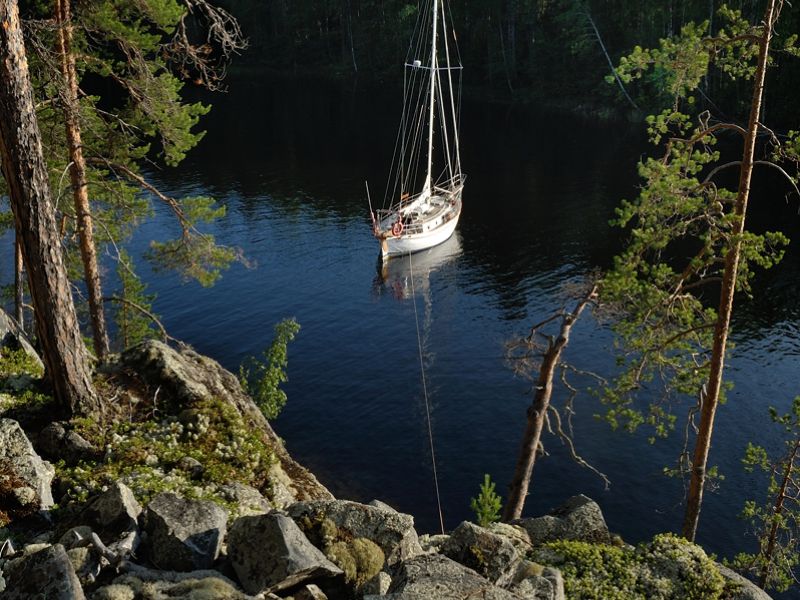 We messed around with anchoring a little - the bottom here is rocky, and the anchor crawled the first time, on the second attempt it took the soil properly (it seemed so at that moment)) In addition, we brought two long mooring lines to the pines growing on the shore. 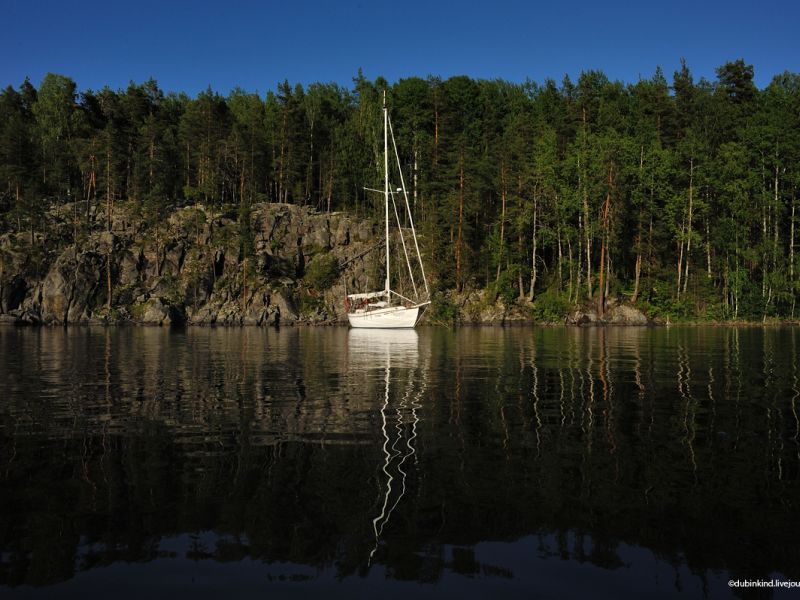 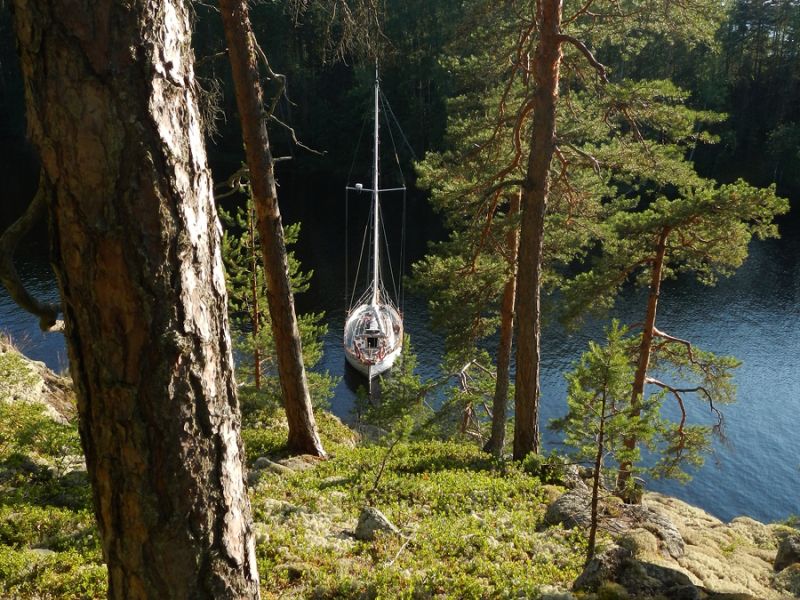 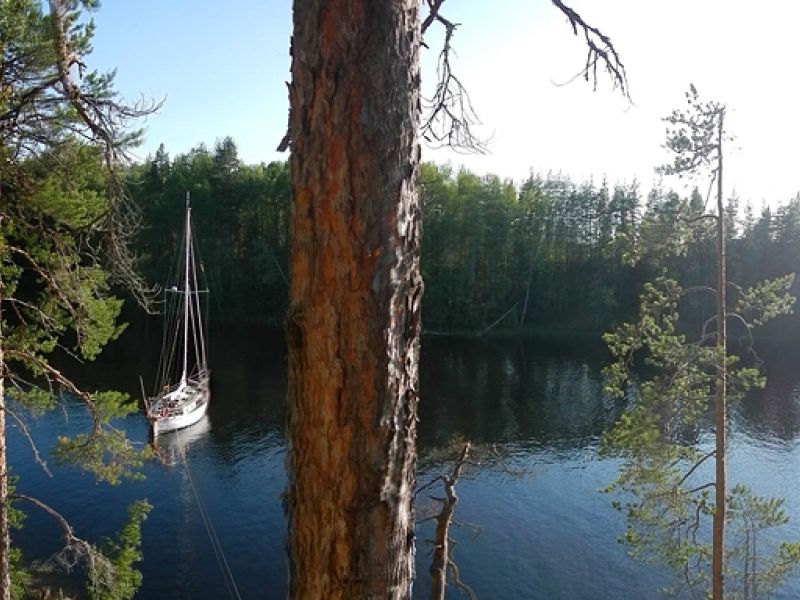 And then admired the most beautiful sunset 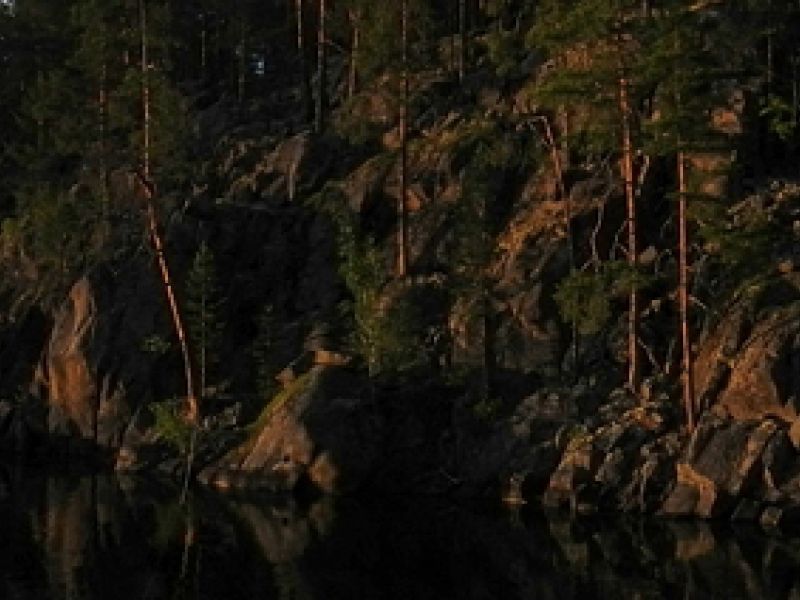 The sun was setting just in the mouth of the bay 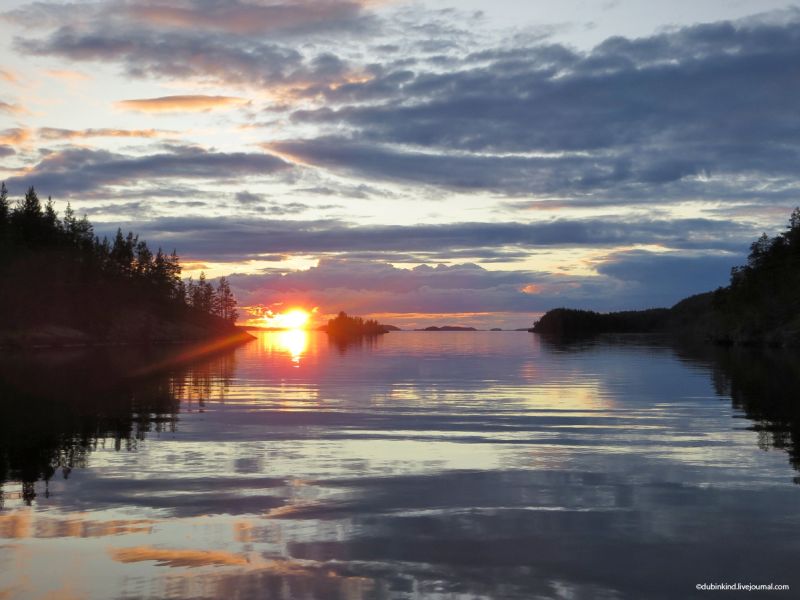 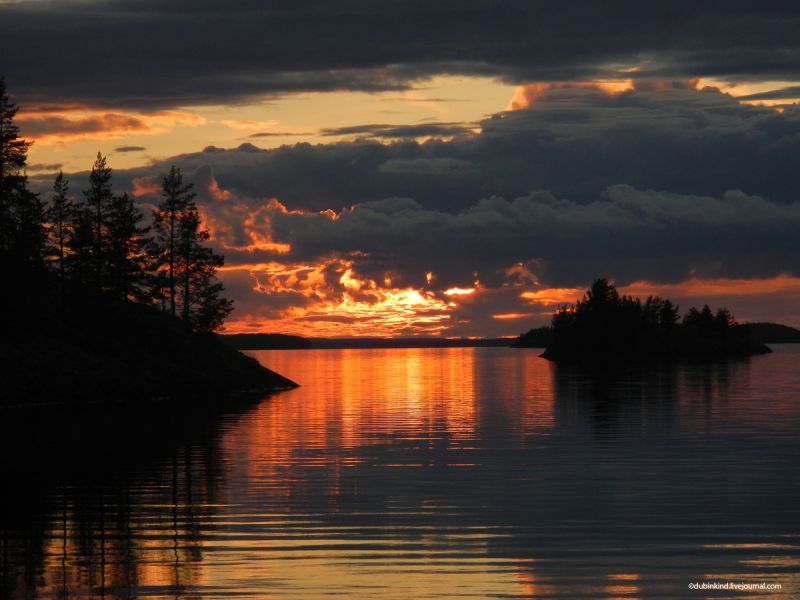 Early in the morning I was awakened by Colin's clatter and screams - during the night the wind (contrary to the forecast) changed direction by 180 degrees and increased noticeably. Now it was blowing just into the bay from the direction where the sun had set so beautifully yesterday. The anchor could not stand it and broke, and we found ourselves dangerously close to the shore. There was no time to fiddle with mooring lines, and we threw them overboard. I started the engine and held the boat in place, and Kolya swam on the dinghy to untie the pines and collect the mooring lines. Waves rolled across the bay. The gray sky hung low and the day as a whole did not promise anything.good. After conferring, we decided to go to Kizhi and spend the night there.

To do this, we had to walk about 70 km, but the wind had changed, and was fair again (for better or worse)), so we hit the road. On the way, it rained on us from time to time, especially heavy rain came just when we entered the strait near Bolshoi Klimenetsky Island, but then the weather improved, and when we arrived at Kizhi, the sun was already shining in some places 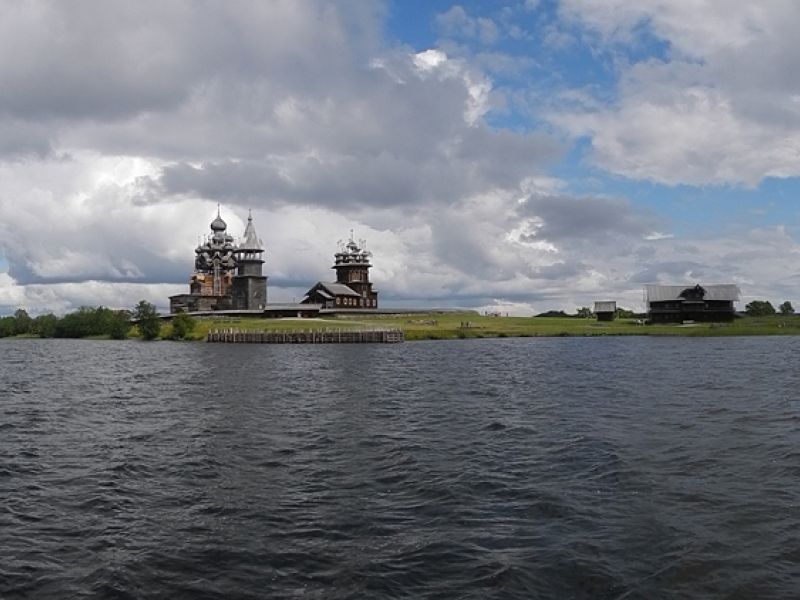 We were unable to land on the island. All the piers were packed with tourist steamers, and the approach to the pier for small boats turned out to be too shallow for us, we turned around at all the more or less suitable places, photographed the architecture from the water and went further, through the northern fairway to the Deer Islands. 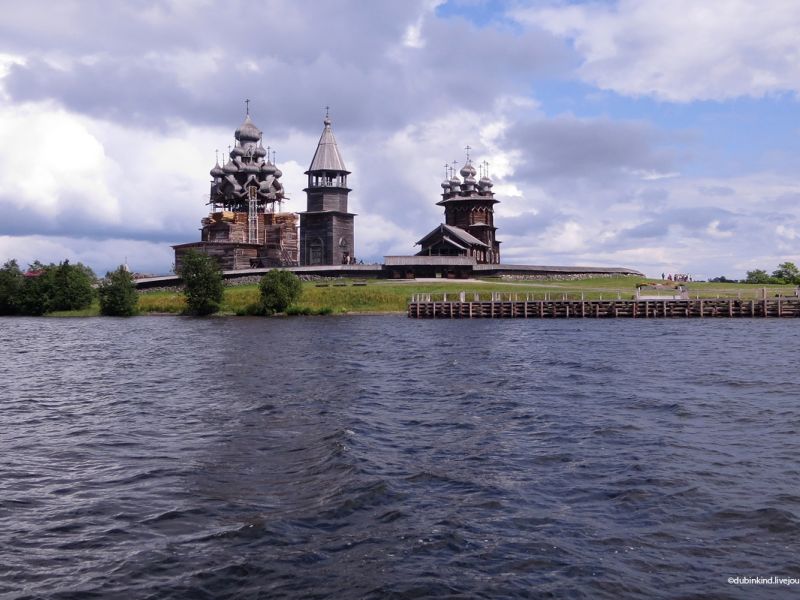 The navigation situation here is a little outdated, there are no alignments and buoys at all, poles stick out in the place of others, and a couple of times we almost ran aground, but nothing happened. Having bypassed the Deer Islands, we stopped for the night in the strait between the South Island and the Onega shore. There was nothing memorable here, and in the morning we went further south, to Nyatina Bay, where we wanted to spend the night before the last throw to Cape Besov Nos. In the book by S.Ya. Moshkovsky, which I mentioned earlier, it is said that this place is well sheltered from waves and wind, and the shores are rich in blueberries.We were unable to verify this. The bay turned out to be rather small)) it was possible, of course, to anchor in the middle, but after we had kissed the rocky ridges not marked on the map a couple of times, we turned around and went to the eastern bank of the Onega, at the mouth of the Vodla River. On the way, we photographed such an unusual cloud. 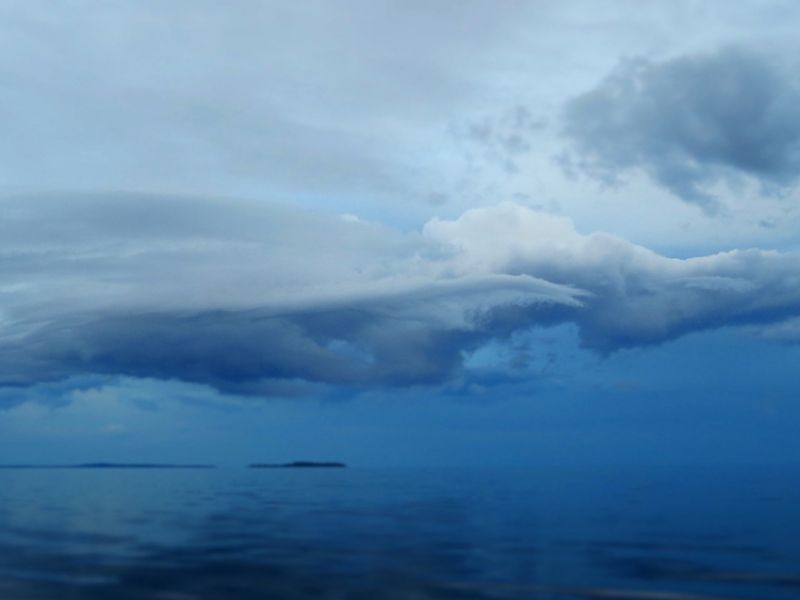 Kolya got on the steering wheel, and I went to sleep. I woke up when we were already approaching the mouth. We anchored already in the dark. There is a lot of driftwood in the river, there is almost no current. Now Kolya went to bed, and Katya and I stayed all night on the anchor watch, there were already a lot of motorboats with fishermen without light and lights rushing around. I didn’t feel like sleeping, especially since the local youth entertained us with loud music all night)

In the morning we didn’t wake up Kolyan, we weighed anchor and went to the Besov’s nose, but he woke up himself, said that he would steer, and we went to rest, I really didn’t fall asleep, and we woke up Katya having already dropped anchor in a sandy bay north of cape. We were very lucky, the wind blew from the shore and we stood quietly. And when the wind blows from the lake, it is not safe to stand here - there are no shelters from the waves at all.

Kolya jumped into the dinghy and was the first to swim to the shore to look for petroglyphs. And I decided to clean the scupper, leaned over the side and drowned my phone. I saw how he plunged evenly, to a depth of about half a meter, and then made a feint and went under the hull of the boat. I didn’t get upset - the place is somehow mystical - it means it was a sacrifice))) (by the way, friends who have my number - throw off yours, for some reason my numbers were not saved in Google, only mail) 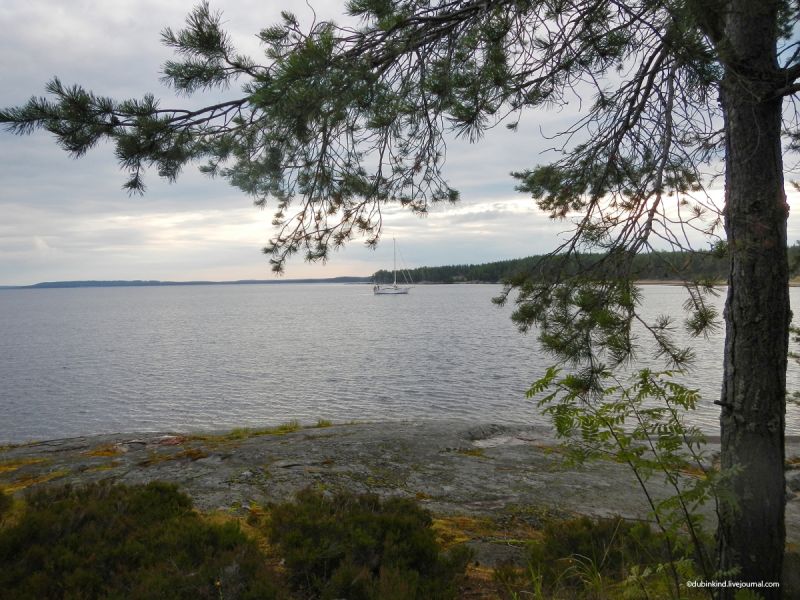 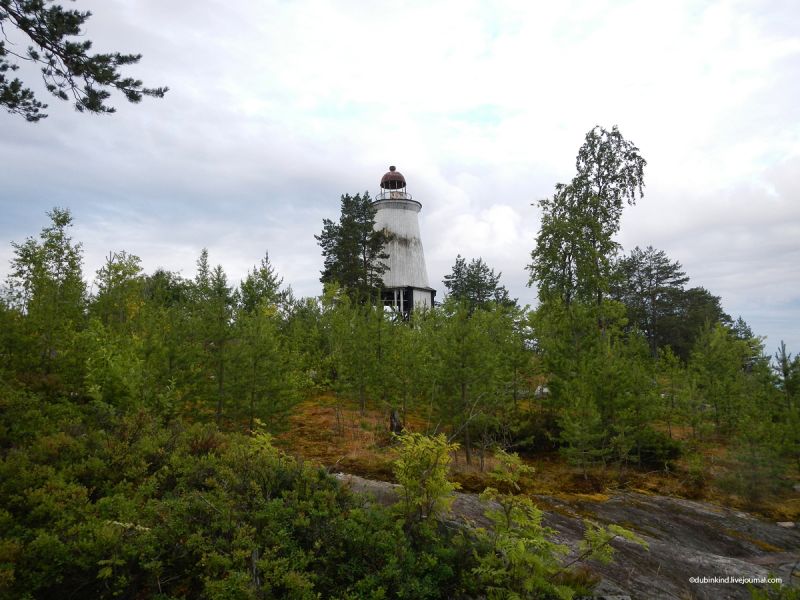 Kolya returned and told where the petroglyphs were. Katya and I swam to the shore, left the dinghy and went to the cape to look for rock art ... 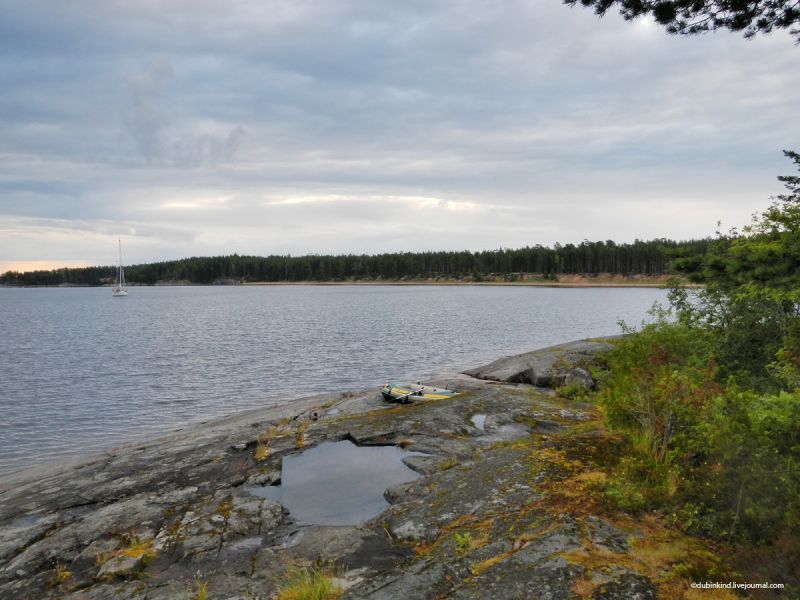 And we found a myriad of blueberries, and the same myriad of mosquitoes found us)) 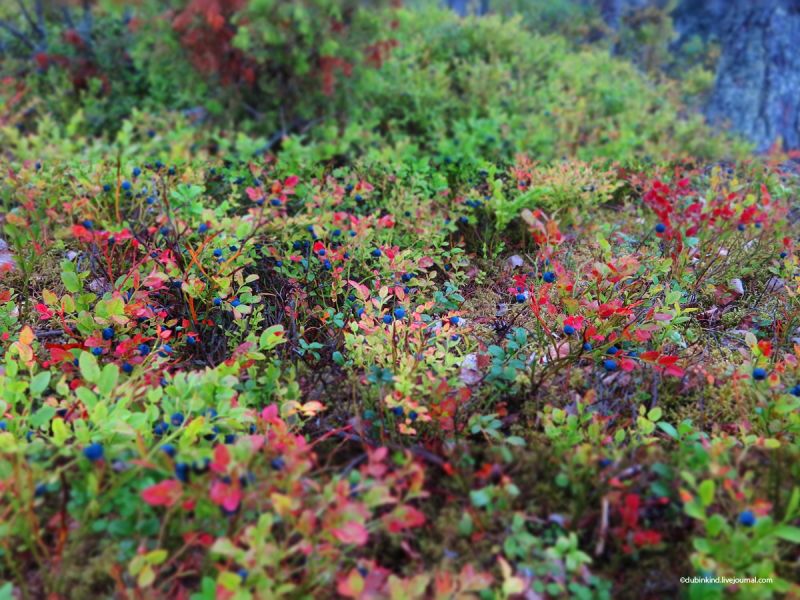 On the right, with twigs and leaves - I collected it, and Katya on the left)) 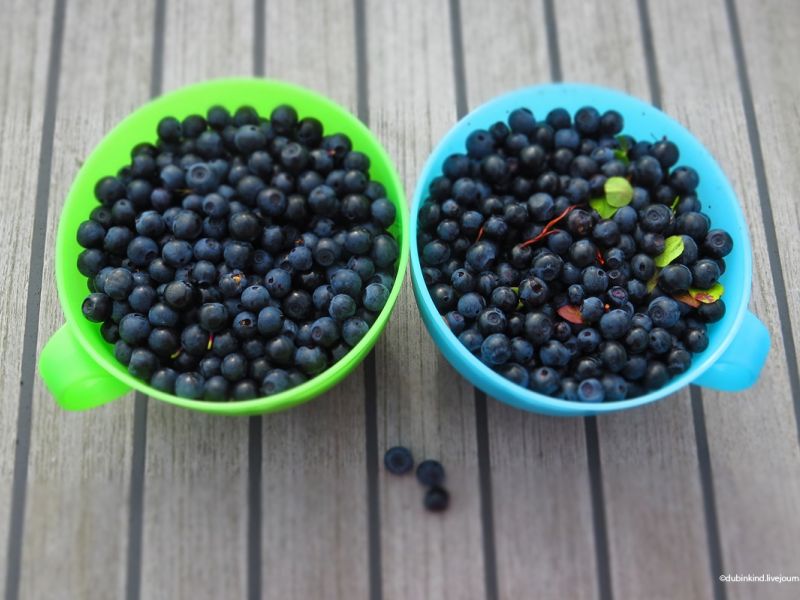 We also found petroglyphs, but I won’t show a photo, I don’t know how to take such things beautifully)))

Well, after Besov's nose, we went further south and by half past six in the evening we left Onega and entered the Vytegra river. 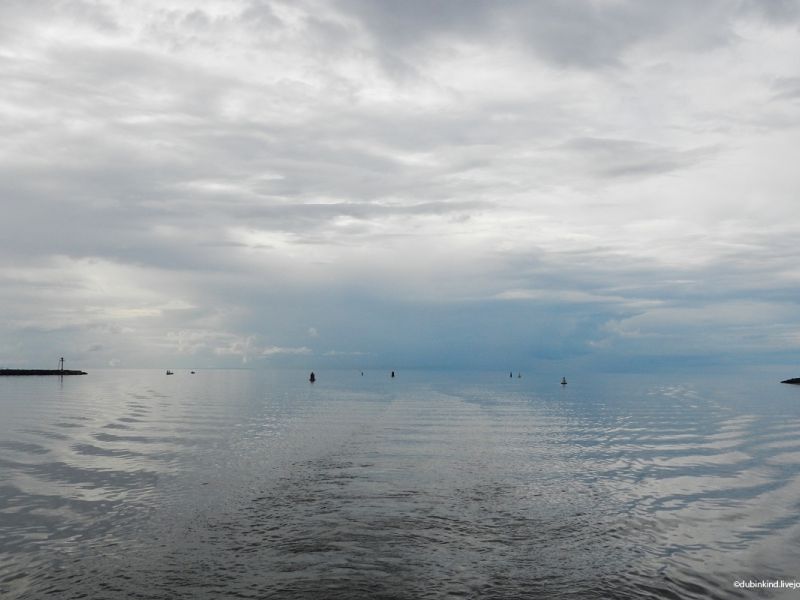