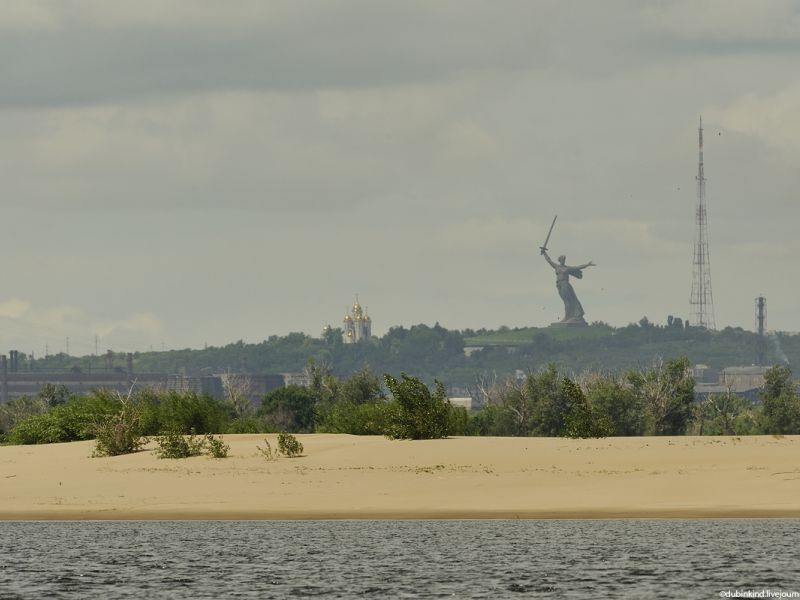 June 16th. At 7 in the morning we left the sailboat club "Alcor". Contacted the Volga gateway. First with the track section dispatcher, and then with the gateway itself. We were told to wait for a passing ship, and we cut circles in front of the gate, reluctance to moor or anchor. At 8:20 we entered the gateway. On the Volga, this is our last lock, tomorrow morning we will have to enter the Volga-Don Canal.

Exactly at 9 we left the airlock. Everything went smoothly, without a hitch, without a hitch, as if we had never had a year-long break in locking. You won’t drink away the skill, although, of course, you need to try))

Panorama of Volgograd right after the gateway. 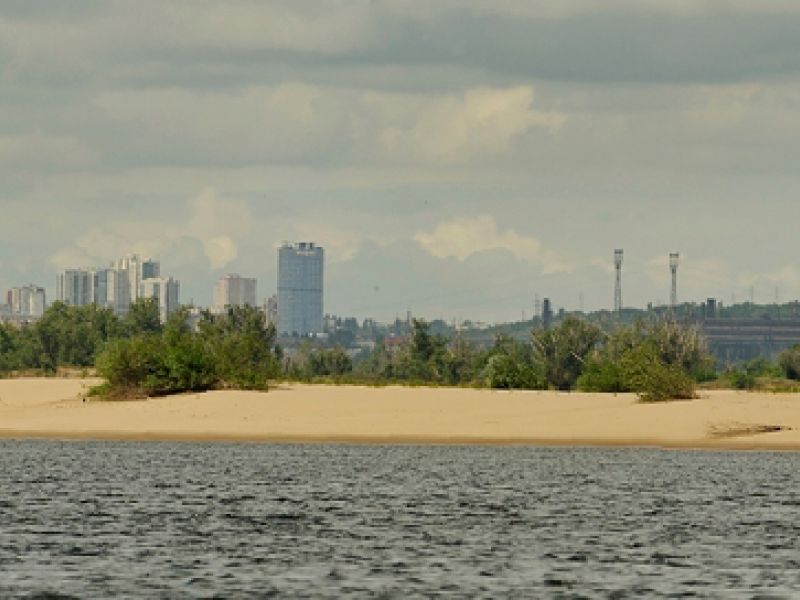 Katya has never been to Volgograd, and I drove past several times in a car, and at night, so we both see our Motherland for the first time, and Fenya too 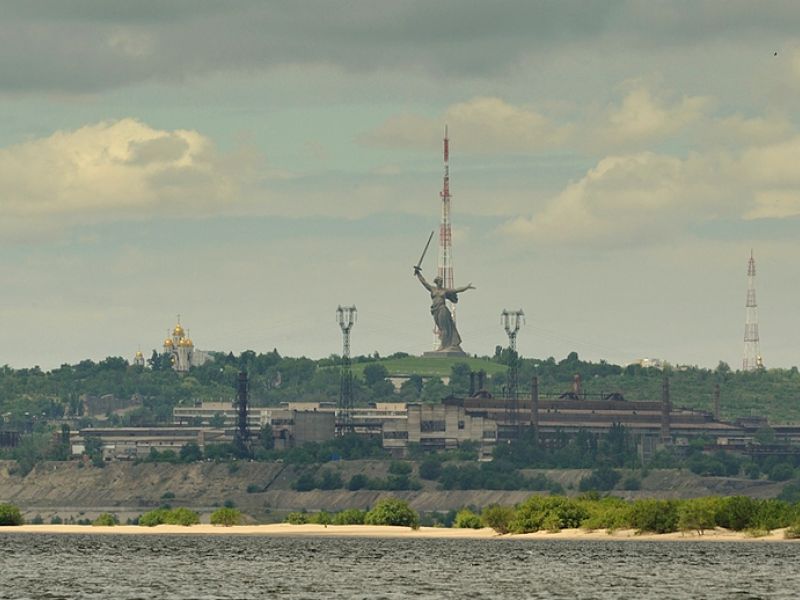 But she is not very interesting to Fene, she barks at the whiskers, no one will miss 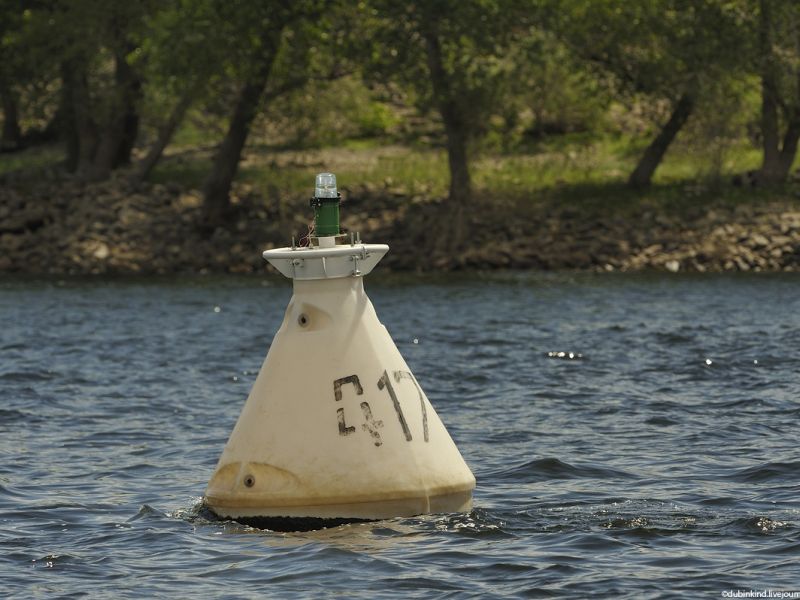 By the way, I also look at them with curiosity (but I don’t bark) - here they are plastic, and prettier than all our way here from Peter himself 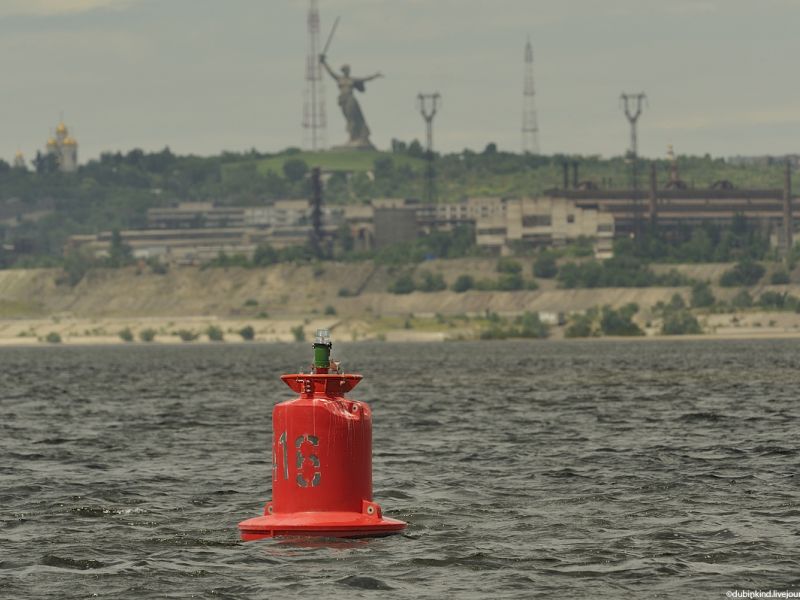 But it’s not very interesting to look at the monument, and photographing it is generally a dead number: either a tower, or wires, or some kind of pipe will definitely spoil the frame! Here is the only angle, more or less without unnecessary details, except for the technique at the foot.

In general, it is better not to look at it from the water ((( 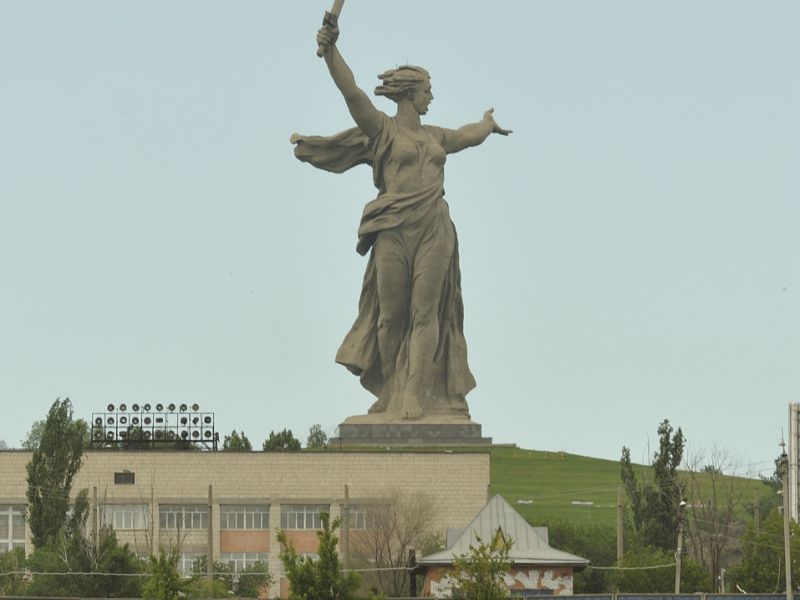 At 11:15 we moored at the floating gas station. Diesel at the gas station is expensive, more expensive than 42 rubles per liter, but the guys said they work around the clock. When leaving the gas station, in order not to crash into the nearest berths, we had to give full throttle. There is a very strong current here. Lenin drawn is watching the gas station from above 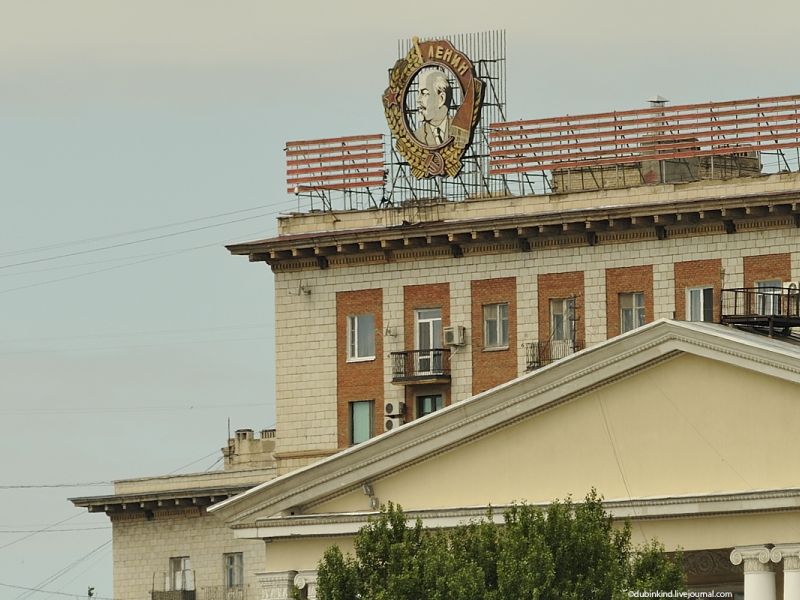 And a little later, he, already in stone, met us at the entrance to the 1st gateway of the Volga-Don 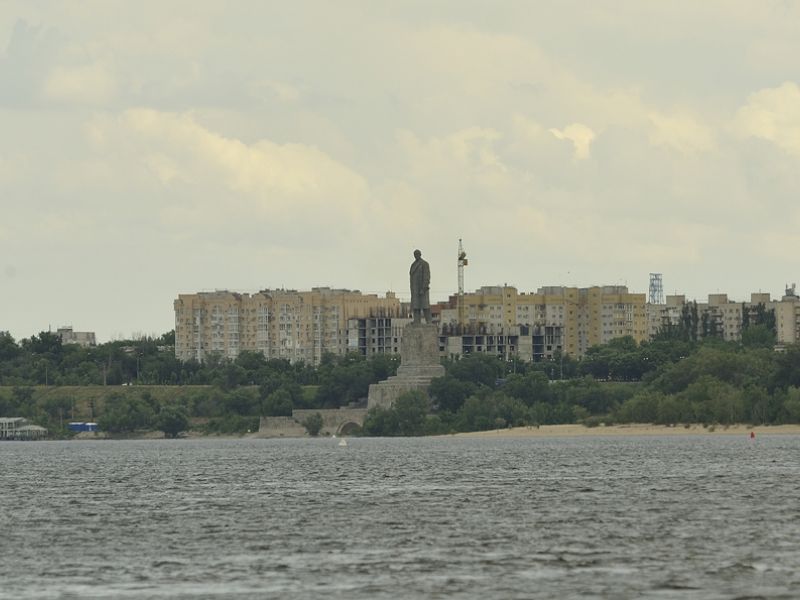 The lock is behind that arch, but we need to go along the Volga a little more downstream in order to go around the sandy island that blocks the entrance to the canal. We were advised not to go straight to the canal, so as not to inadvertently run aground 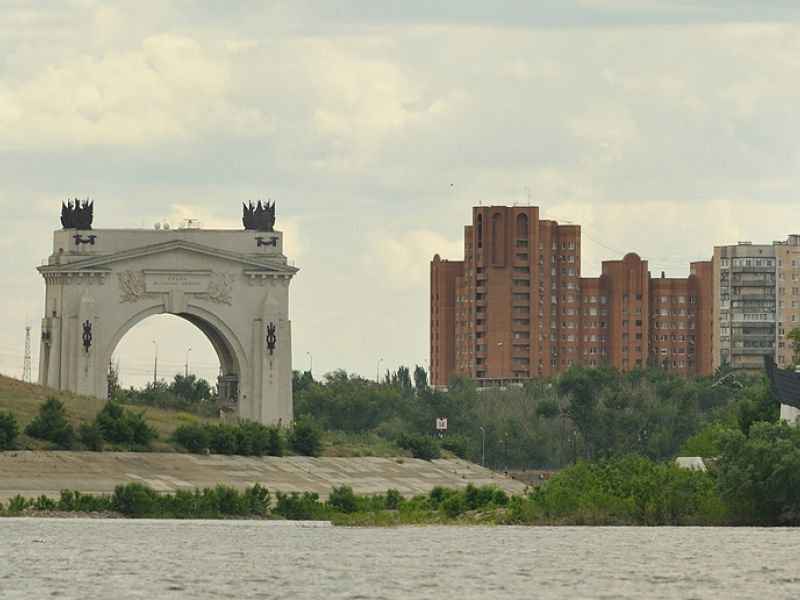 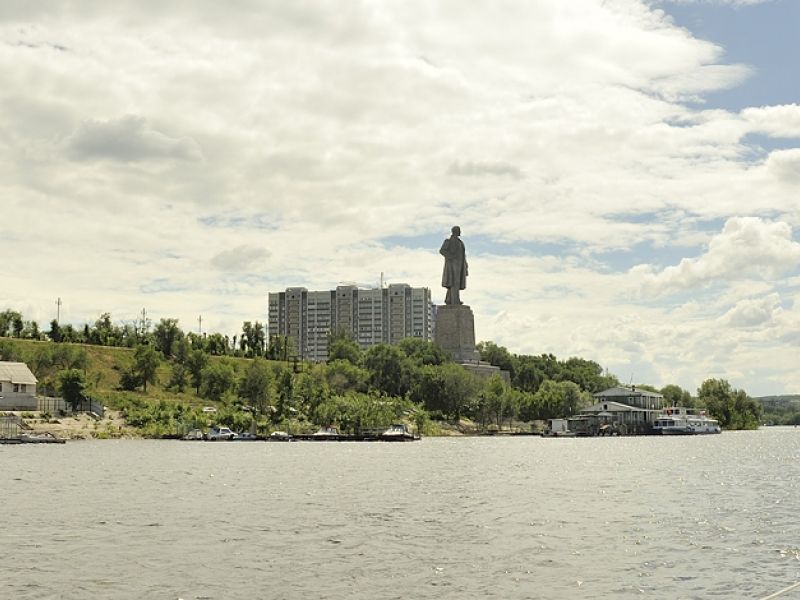 They didn't run aground. The circus did not work out, and Lenin seems to be dissatisfied with this. ) 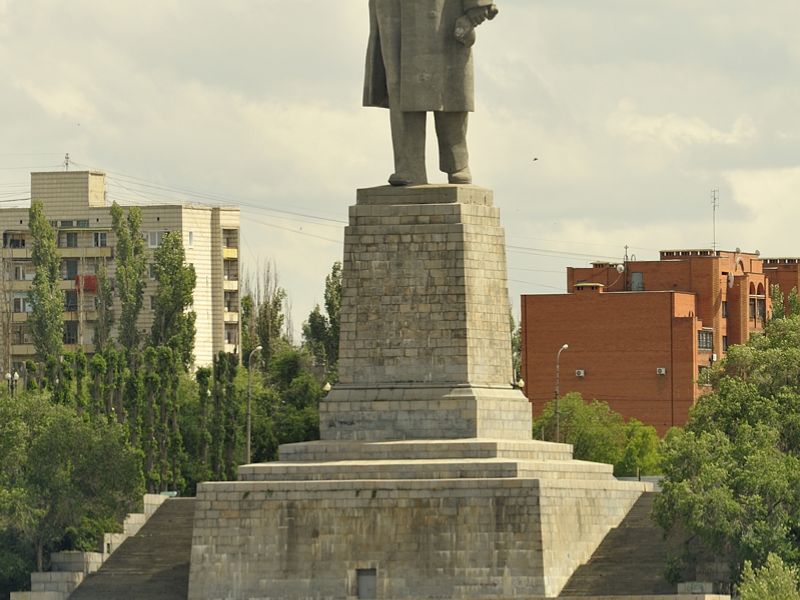 We go into the Krasnoarmeisky backwater, located in front of the gateway. 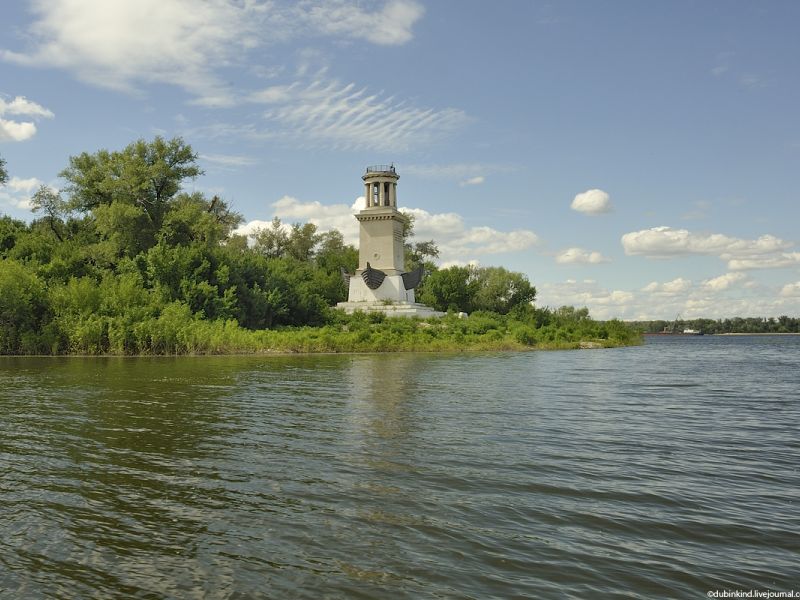 And, after some winding at different landing stages, we moor to the last one. 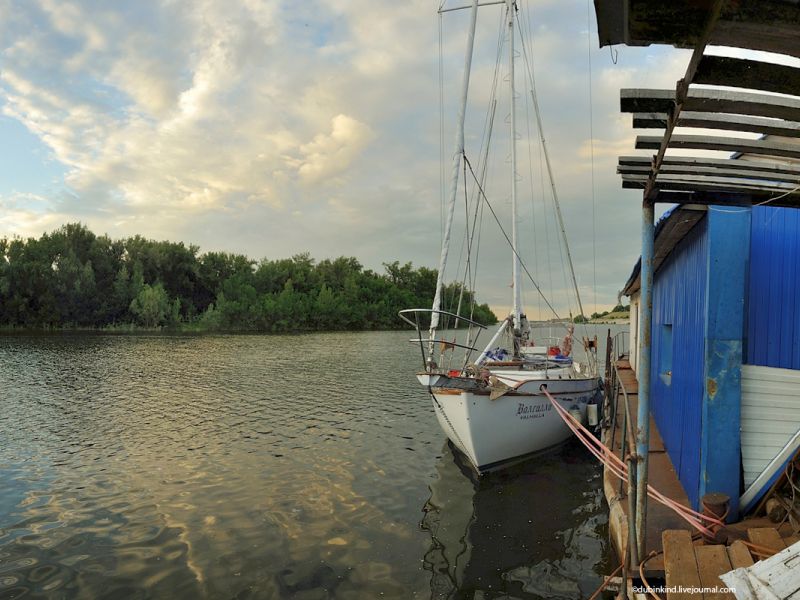 Then the first thing I do is go to the channel controllers. We tried to write an application for the passage of the Volga-Don in advance, but there was so much to fill out, scan and send by e-mail that I decided to do it on the spot. I took a voluminous folder with documents and went to the office. The guard, as usual, did not let me inside, and I called the chief dispatcher on a landline phone from the entrance. And right there, by phone, he accepted my application orally, miracles) Yes, and calculated that for the passage of the channel we should be charged an astronomical amount of 14 rubles from kopeiks, which they forgive us, since they don’t have the opportunity to operate with such numbers))) Thank you!

Well, then we walked with Fenya, I ran to the bank and shopping. On the way, I saw a couple of people resting in the park, on a bench, in mosquito nets - and from the upcoming prospect of meeting with hordes of insects, a cold sweat broke out in my heart. In the evening we walked with a walkie-talkie to the gateway to check the connection. There was a connection, and it was by the way, because we didn’t find the phones of the gateway anywhere, and our walkie-talkie was acting up mercilessly.

And now everything, rest, in the morning we leave the Volga waters!