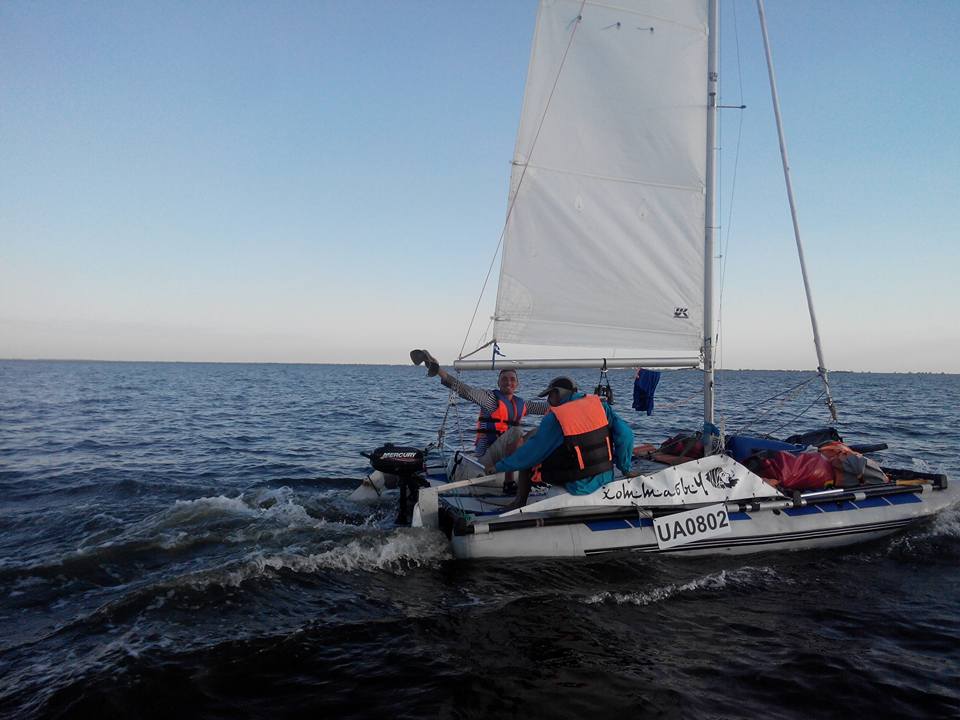 We were awakened by the guard of the parking lot, where we pitched tents at night. Grisha talked to him and agreed that we would leave today, and this suited the guard. We slowly got together, Yura successfully repaired his bike (he had something with the speed switch), and Grisha's trunk rack broke and we couldn't do anything about it. Well, somehow the trunk on one rack held the trunk. Near our overnight stay, a bar with Wi-Fi was discovered, and we taxied there to recharge our phones and chat with loved ones in Ukraine. We ordered orange tea there, which washot orange juice for 1 lira and Turkish coffee for 3 lira. I don't understand coffee - coffee is like coffee, delicious. Cool horses near the bike shop. I'll have to visit them if I'm still in the area. 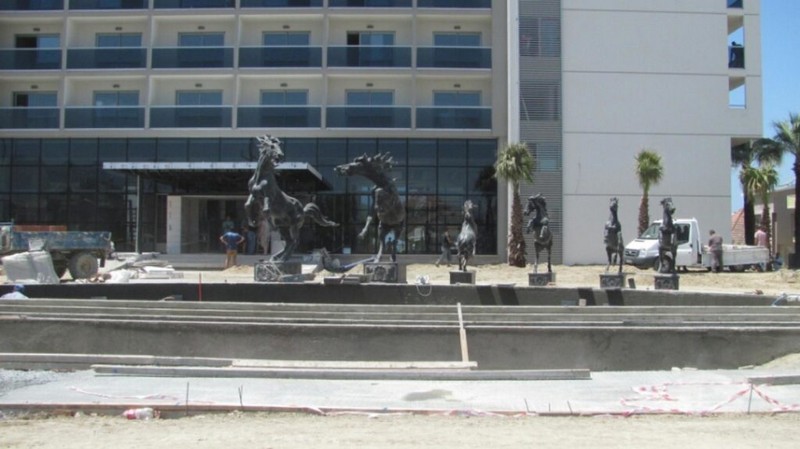 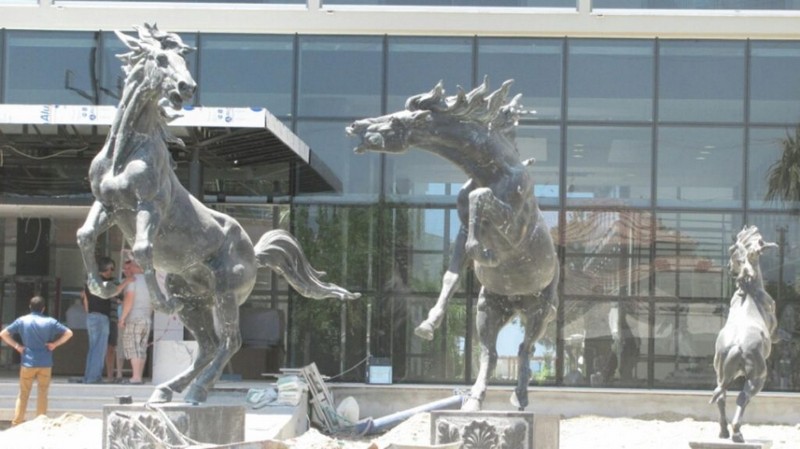 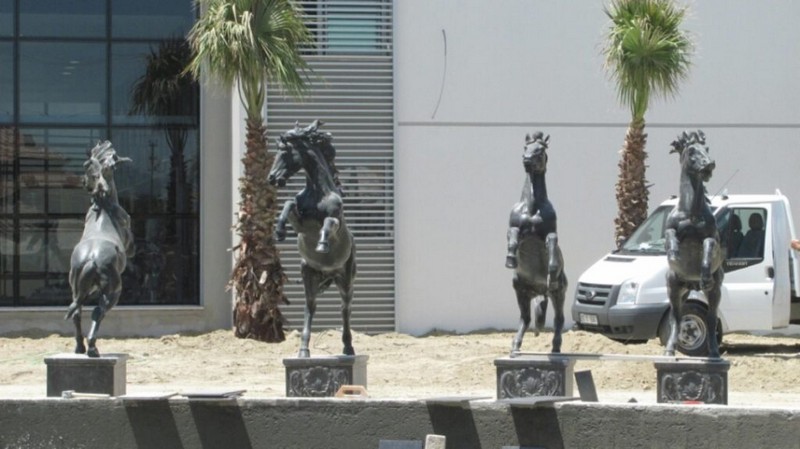 From last year's trip, I know a bike shop, in the city near which we were, we decided to go with Grisha together to try to repair his trunk there. It turned out that the store was 10 km away and they could not help us there. Well, on the way back, peach orchards were discovered, where we stocked up on sweets :) In the photo is the owner of the bike shop, whom I met on a bike trip last year, but unfortunately, he did not recognize me. If I see him again, I will show this photo. 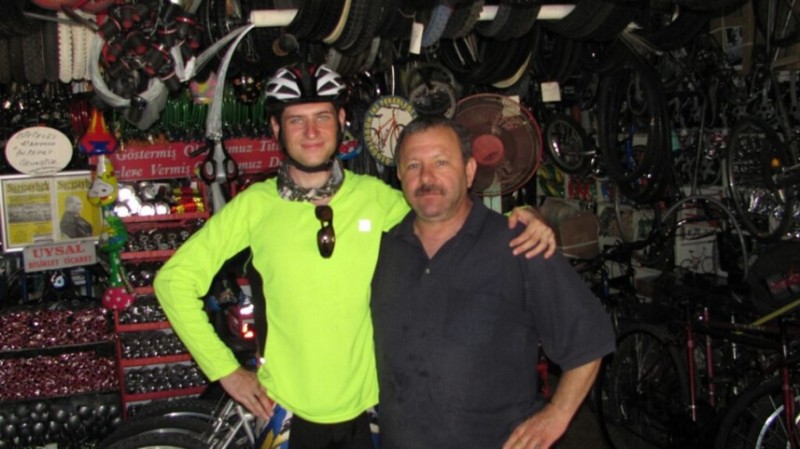 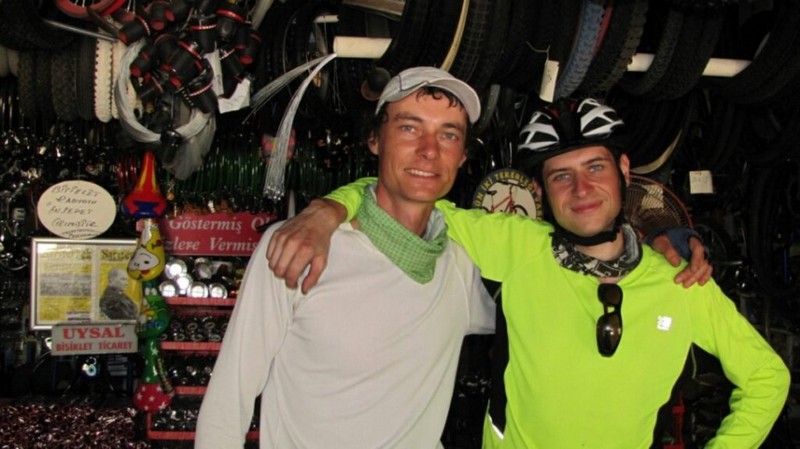 Returning to my own, I took the phone off the charger: lo and behold, it was charged by 70%, for the first time so much for the whole trip. Tanya akhtung had her Facebook account blocked and she had to look for an Internet cafe. I couldn't restore access from my phone. Meanwhile, the people began to absorb the national dish of Turkey - doner. The way it is cooked here and how it is prepared in Ukraine is incomparable. If you're in Turkey, try it, you won't regret it. When they dealt with the doners, they ate a bucket of yogurt with bread. Here yogurt is sold in buckets and it looks like sour cream. I learned that watermelon-turkish will be kavun :) We went with the whole crowd again to the peach orchards and stocked up, how much space there was. I think 12 kilograms were narwhaled) In the distance is the Dilek reserve, from which we left yesterday 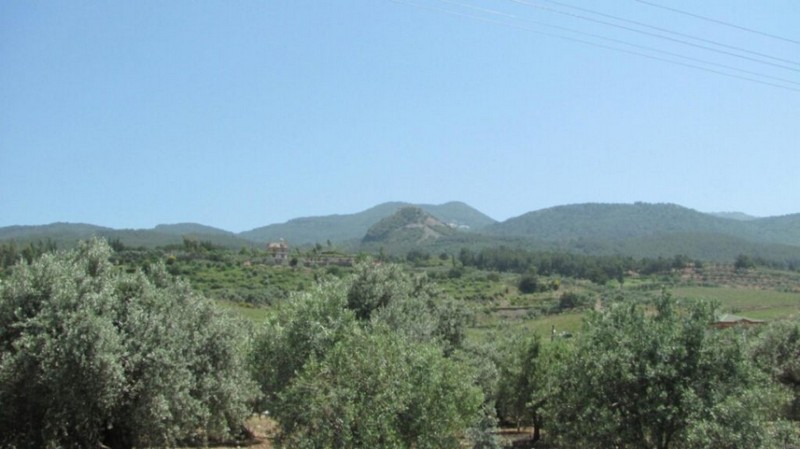 It was already 17:00 when we went to look for an overnight stay. The road was through the city, here for the first time in Turkey I saw high-rise buildings. For some reason they don't like it. 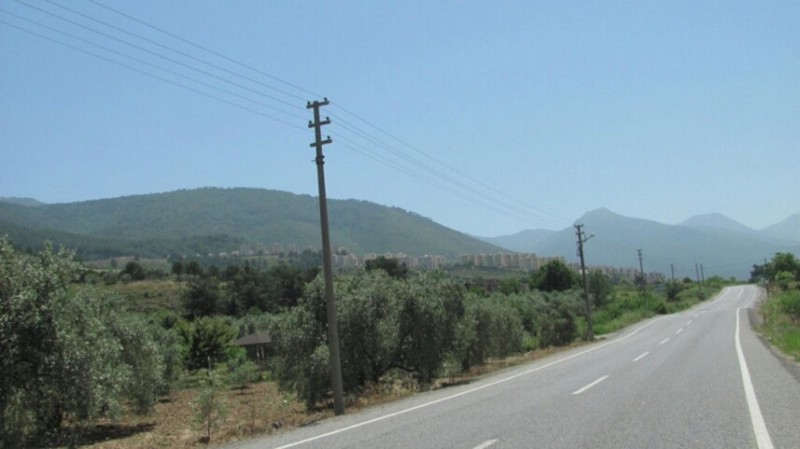 Village along the road 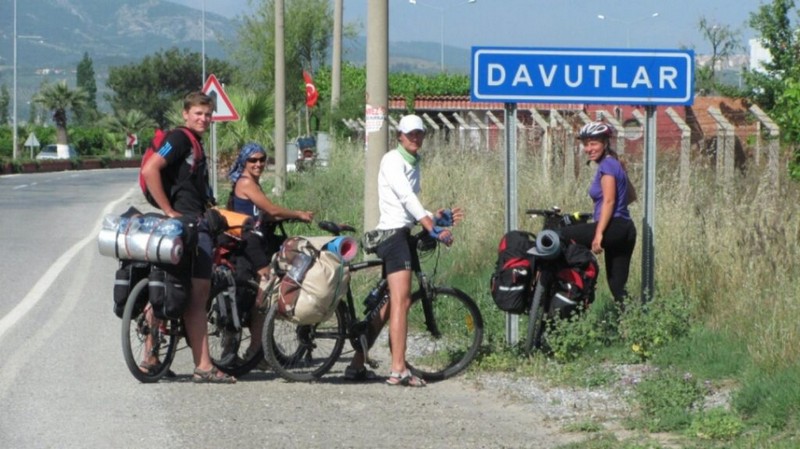 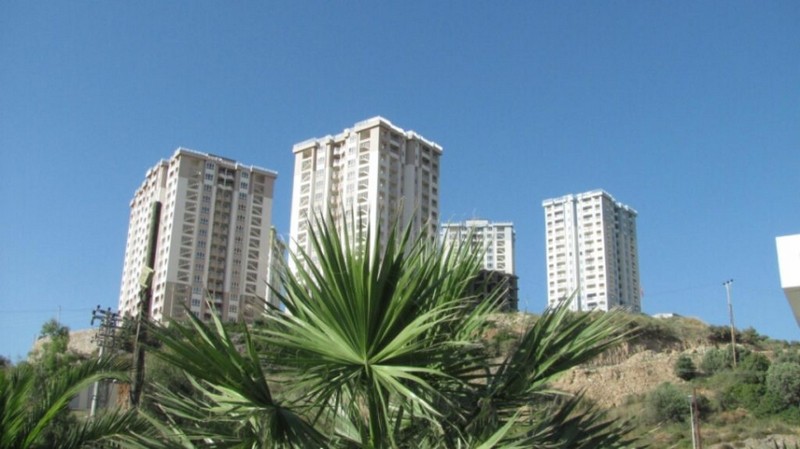 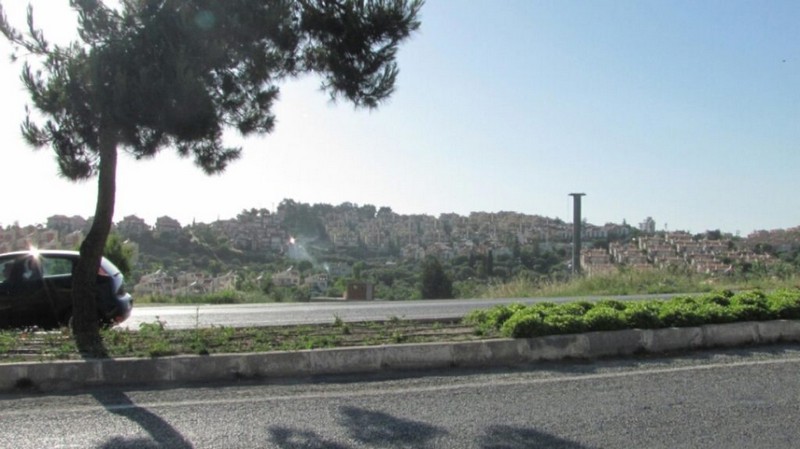 Some strange crap near the road :) 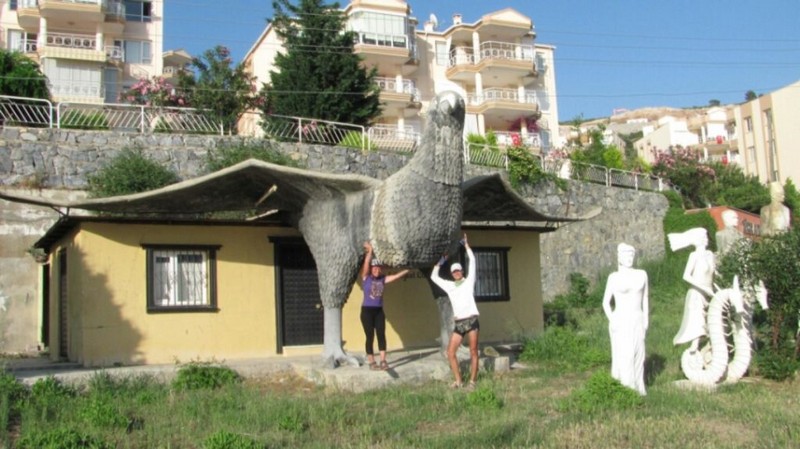 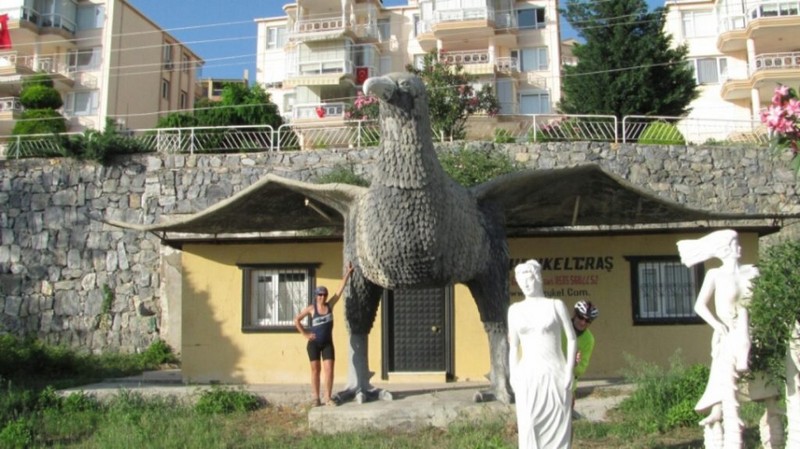 This rider is apparently Atatürk, a well-known figure in Turkey. And the rider is Olya, a famous person in Zaporozhye :) 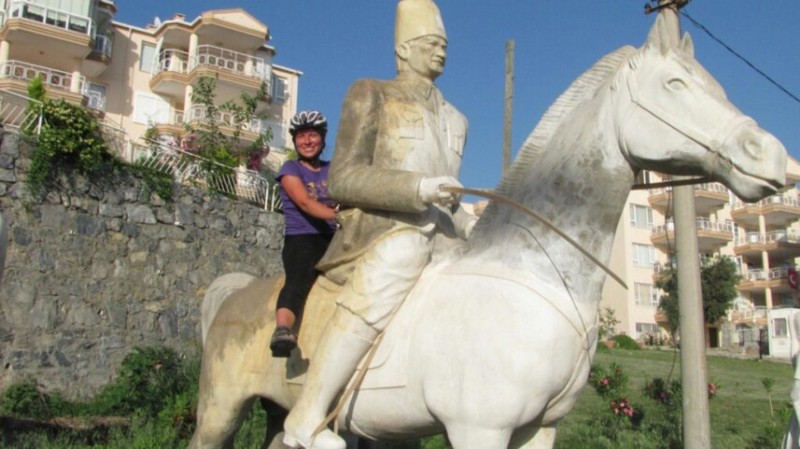 We arrived at our overnight stay at the beach in the old part of Kusadasi at 19:00. The place here is heavenly: the sea sits right in the sea, we were allowed to use the toilet for free and sunbeds on the beach. Bathed in high waves, ran through the sand and surf along the beach. We still have 4 days before the end of the trip, and it remains to see only Ephesus, the largest ancient city in Turkey and Izmir, from where we need to fly to Ukraine. Well, let's figure out what to do with ourselves :) In general, Turkey liked the fact that there is no theft, friendly people and a mild climate. I don’t know how to work here, but to liveassno. In the photo we pitched tents on the beach in the old part of Kusadasi. Cool place, appreciated during last year's bike trip. 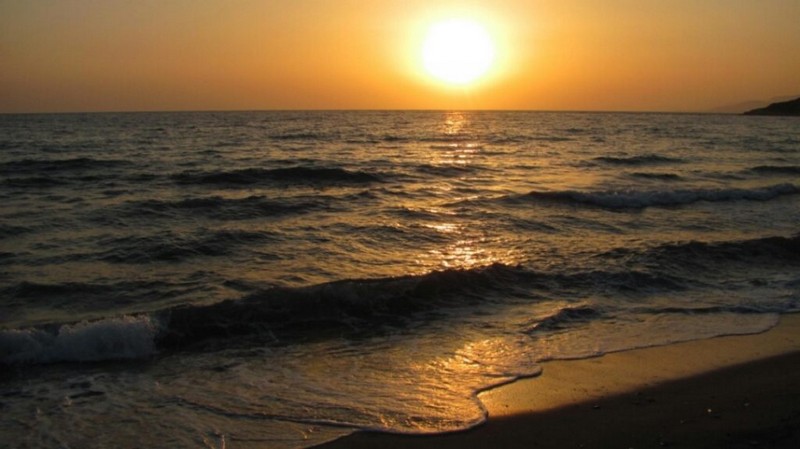 Now we are preparing a soup with buckwheat and bulgur - wheat. My multi-fuel primus burner worked well all the time, already ate 3 liters of gasoline. Today we drove 50 km and gained 300 m of altitude. It's already relaxing :)