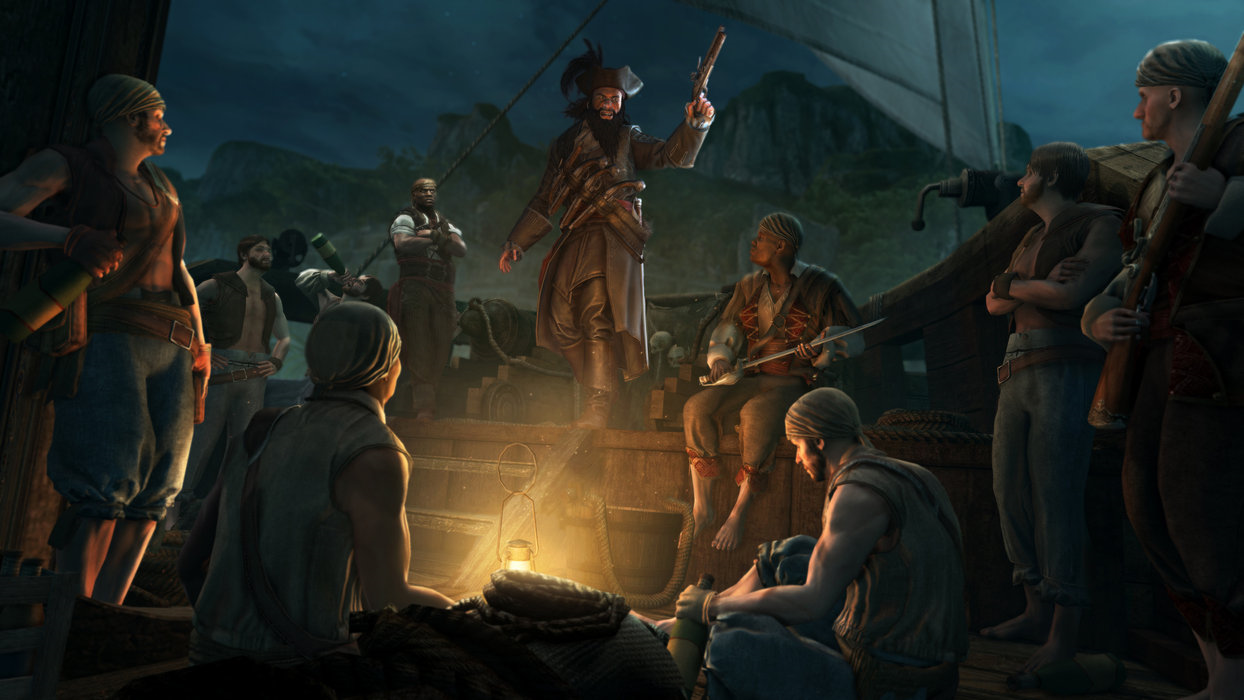 The idea to go to Turkey appeared after some participants could not go on a hike in the Czech Republic and it did not take place. Just from Ukraine to Turkey it was possible to get cheaply by plane (100 dollars one way) and no longer required a visa (Ukrainians are now entitled to a free 30-day Turkish visa).

While the group was gathering, cheap tickets for the beginning of September sold out and had to be rescheduled for the end of September. The group again did not want to gather for some reason and in the end decided to go alone with the girl. It was decided to fly by Pegasus Airlines with a flight from Kharkov to Antalya. This company has one peculiarity: you can’t book seats for bicycles in advance and there is a chance that they will be refused to take them in baggage at the airport :) We were lucky: we took them on both flights, but not without bickering :) According to the reports we read, it became clear that we should buy something in Turkish pharmacieswithout a doctor's prescription is unrealistic, so we took with us a huge first aid kit weighing 1.5 kg, which was never useful. Sun cream was forgotten, but it turned out to be unnecessary

The climate in Turkey is 10 degrees warmer than ours, so we took light summer sleeping bags and a minimum of warm clothes (only to get to the airport in Ukraine and on the way back). From the food they took 1 kg of fat for two and a stick of smoked sausage (because in Turkey, sausage is not very tasty). The girl took with her a mask and a snorkel for diving and an underwater box for a fotik, which turned out to be almost completely useless: there is nothing to take pictures under water in Turkey, look out while diving - too. Capes were taken from the rains, but they were also not useful: it rained 2 times, shallow and at night. In the morning alreadyIt was dry. There are bike shops in many cities in Turkey, so they took a minimum of spare parts: spare spokes and tubes.

The route was planned for 2 weeks based on several reports of cyclists who had already gone there, after a week of reflection and planning it turned out like this (numbers indicate overnight places, yellow - bus crossings, blue - led):

At 22:00 we got to Kharkov airport (from Zaporozhye we got by train, then by bicycle from the railway station), boarding the plane began after 4.5 hours and I began to prepare the bicycles for packing. I did this for the first time and spent 3 hours on both bikes. 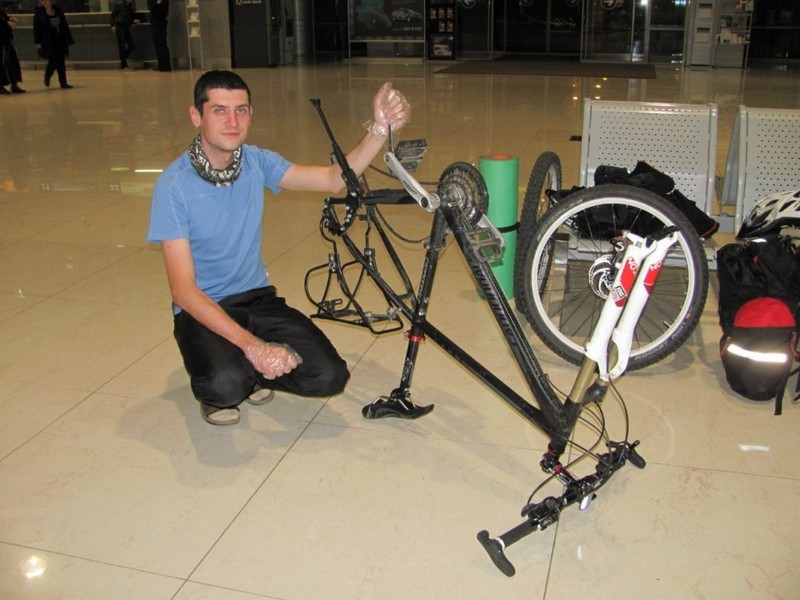 We weighed the luggage: the bikes weighed 14 kg with packaging, trunks 12 kg each. We paid $60 for bicycles and checked in our luggage. Then there were 1.5 hours of trying not to fall asleep :) By the way, you can’t take water with you on the plane, but it costs in the waiting room and on the plane as much as 3 dollars for 0.5 liters. So I advise you to get drunk before passing the control or draw water in the washbasins in the toilet, if you really want to drink. Finally, the landing was announced and we hurried to our gate, and a crowd of 100 people followed us. In the photo - the cabin of the Boeing 737, which we flew and the view from the window to Turkey. 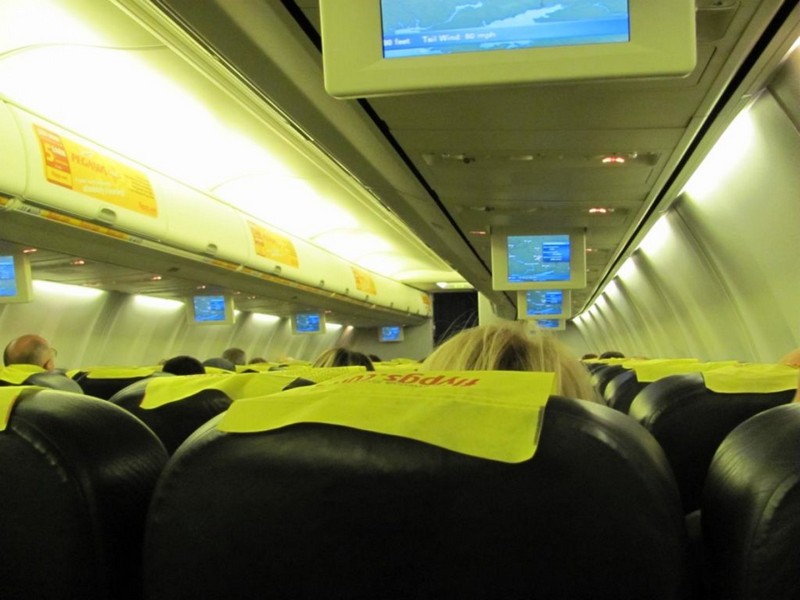 Fly to Istanbul 3 hours, then 2 hours waiting for the plane to Antalya. You can’t leave the waiting room, and even if you could, you won’t even have time to go to the city and back in 2 hours. In the photo, under the wing of the plane, the Lara area and a wonderful beach, in the forest near which we spent the night with a tent at the end of the bike trip 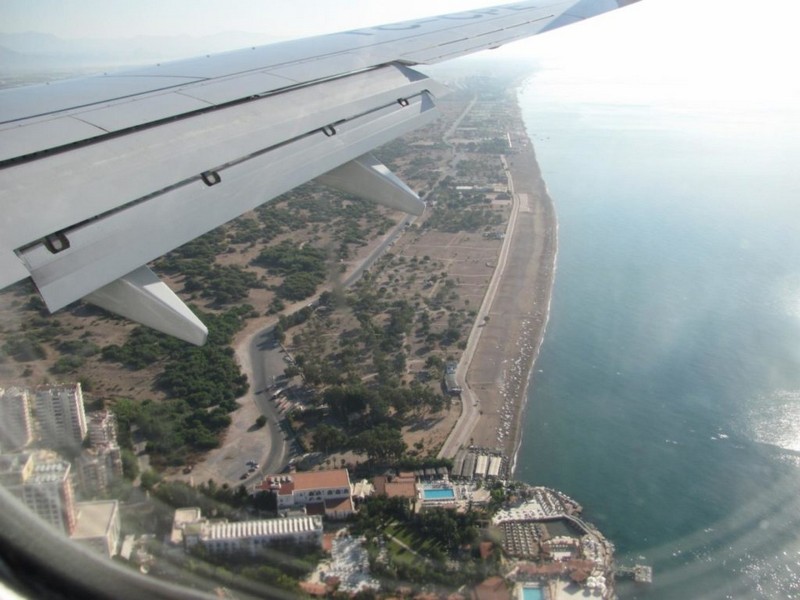 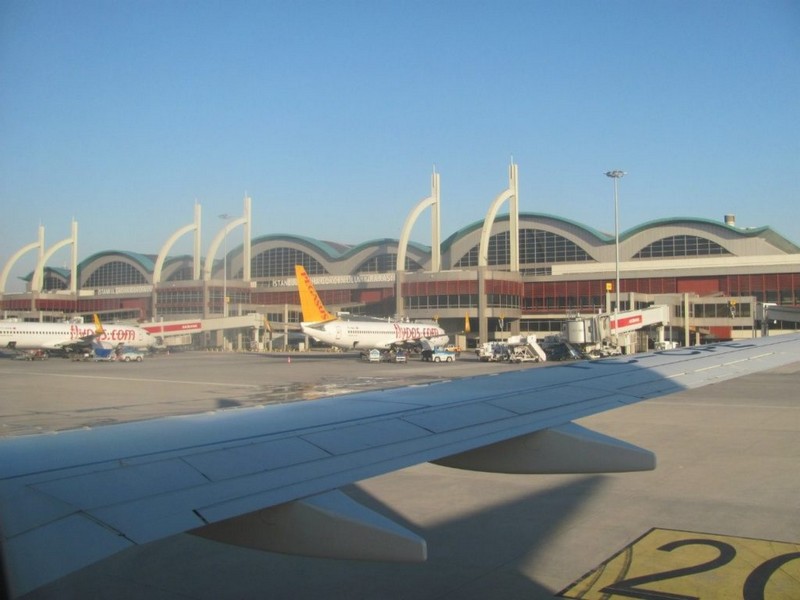 In the photo, the assembly of the bikes. I spent 3 hours on 2 velos. 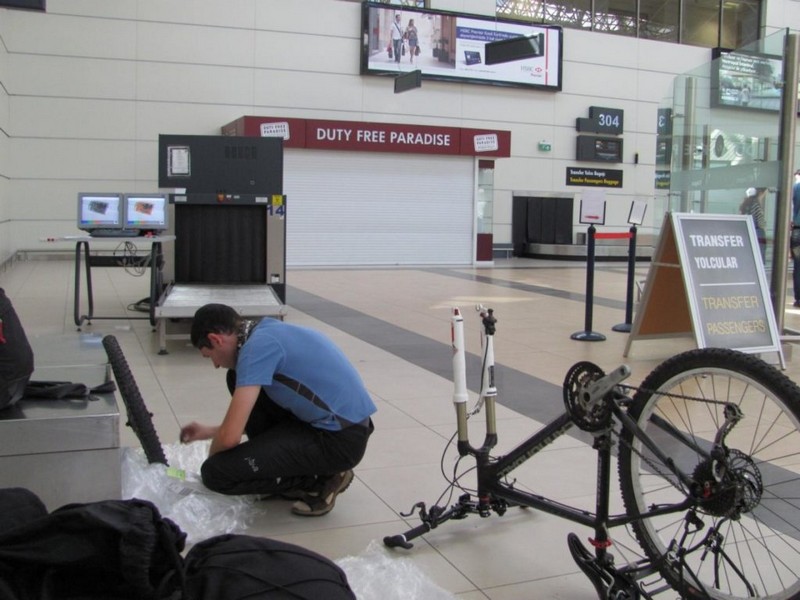 At 12 we are ready to leave, we had to get to the bus station and take a bus to Denizli. The streets in Antalya are very clean, lots of greenery. The traffic is dense, but not particularly annoying. At the first gas station we met, we bought gasoline for a multi-fuel burner, which was supposed to cook food for the entire trip. Gasoline prices are high: 5 lire for 1 liter of 95th gasoline. It’s good that we had enough liters for the whole trip. We got to the bus station by 3 o’clock, where a local approached us and asked where we needed to go. After listening to the answer, he took us to the bus ticket office, where he tookand 25 lire for the fare. There was still an hour before departure, we slowly unscrewed the front wheels and wrapped the bikes with covers. In Turkey, only such large buses run long distances. Vela fits without problems, no extra charge was required. There are a lot of bus companies at the bus station and they differ little, except that in some during the trip, in addition to standard services, they can also treat you to tea and cookies if you go far 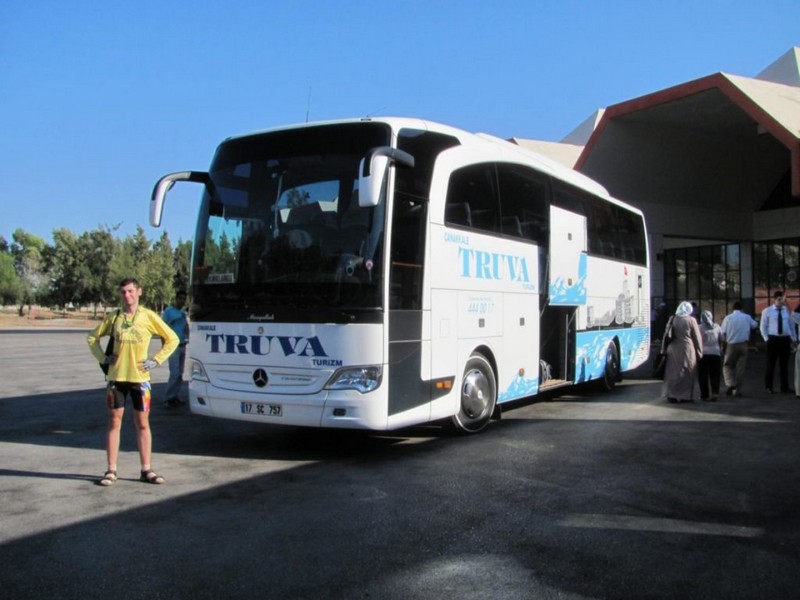 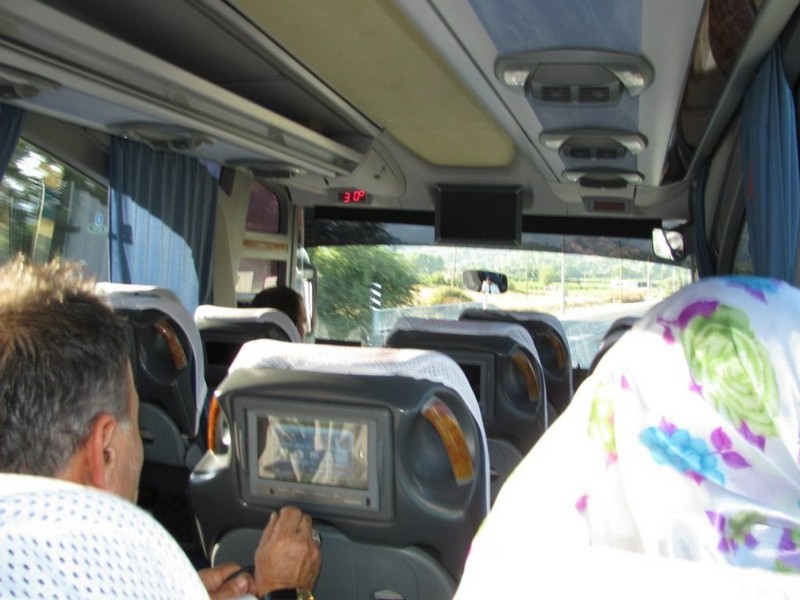 We drove for a long time, we arrived at Denizli at 22:00. The locals began to ask questions about some park or campsite nearby to spend the night. But everyone said that there was nothing like that nearby and advised me to ask the police. The police in Turkey, I must say, know their job well: we were assigned to the roof (!) of a one-story building at the bus station, where we cooked dinner on a burner. My multi-fuel burner on Turkish gasoline did not clog even once during the entire trip, and in Ukraine I had to clean it after every cooking. Overnight in a tent on the roofe, free. 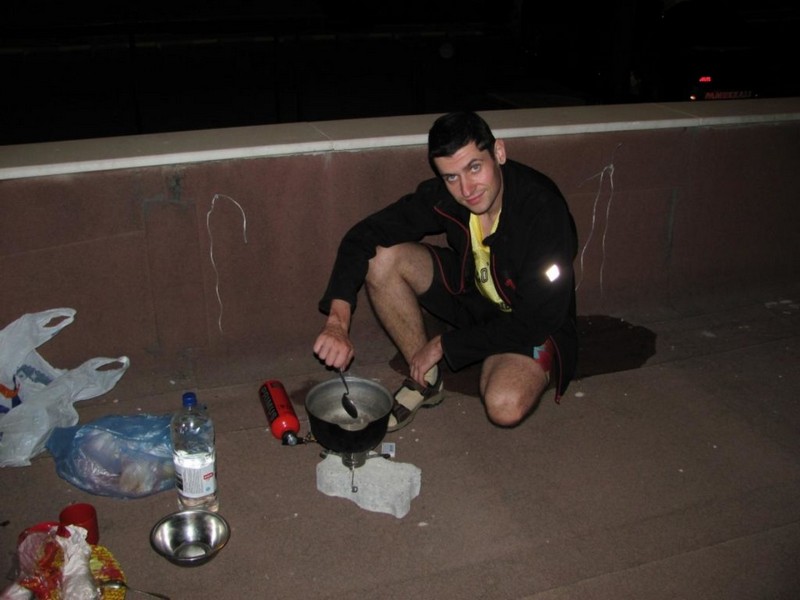 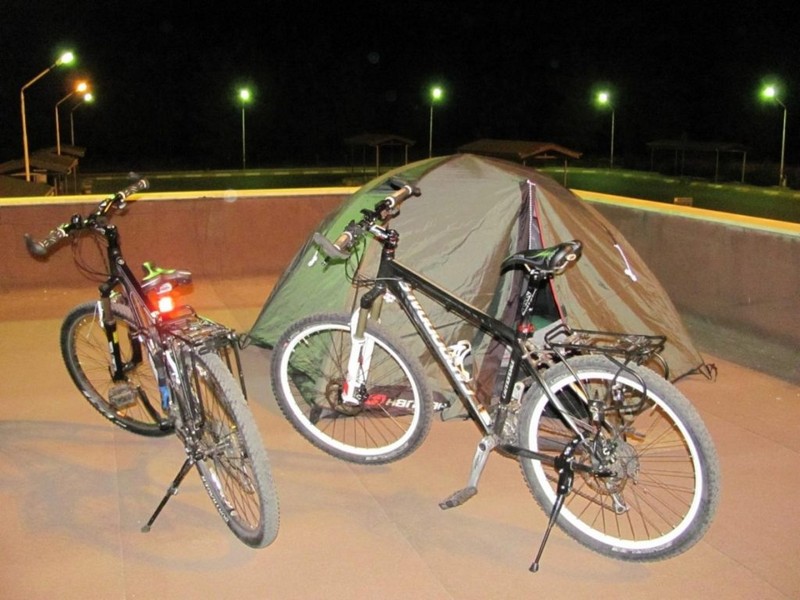 Denizli city where we spent the first night in Turkey

The day was very exhausting due to ragged and short sleep on the plane and we fell asleep quickly. It was cool at night, about +10 only. Such a nighttime decrease in temperature in Turkey occurs in areas remote from the sea. We rode the bikes: 25 km.